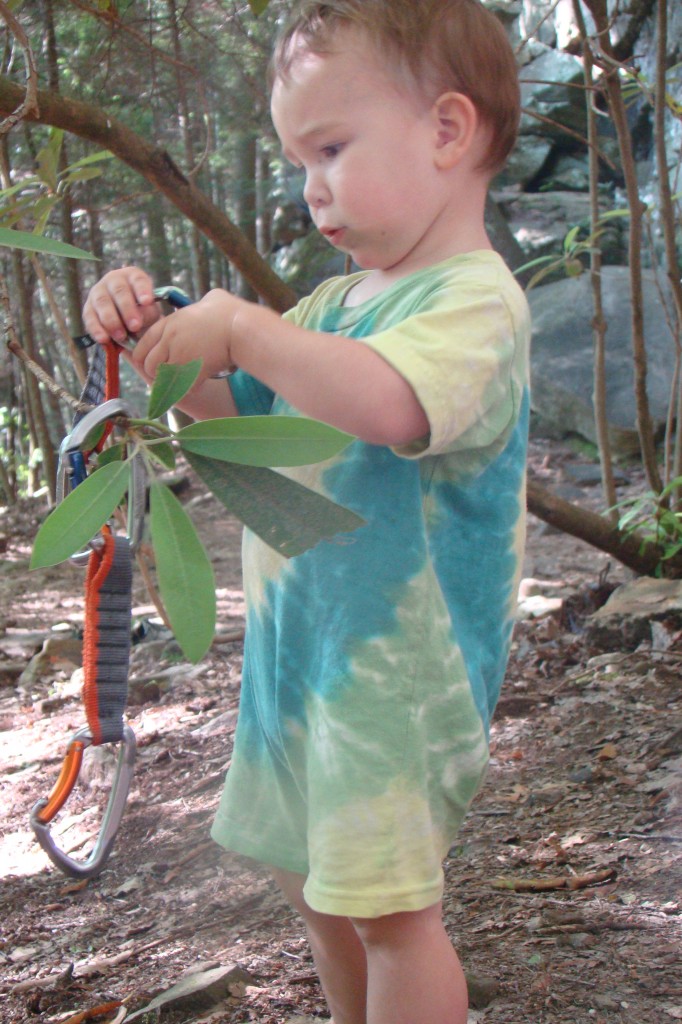 If that were the question, then the answer would most definitively be YES to both, which is great since our plans almost got squashed before we even left the house because of a poor, sick Cragbaby. Thankfully though he started feeling better just in time (when we asked him if he wanted to get in Mommy’s car and go sleep in in a tent he started jumping up and down shouting, “TENT!  TENT!”).  Despite a later-than-planned start, we made it to Tennessee only slightly worse for the wear.

This trip was an interesting balance of both success and failure on the rock.  It’d been almost a year since our last Obed trip, and it felt good to come back and feel noticeably stronger on routes I’d struggled on before.  I was also able to get on a bunch of routes I’d never been on, and I was able to send all but one…but more on that later.  Here’s my quick and dirty tick list from our 4 days of hot, humid, (but shady!) craggin’

Day 1:  Little Clear
We didn’t want to ruin ourselves on the first day, so we kept the grades low and the onsights high.
Roofus Doofus  (5.10a)
Sweat Lodge (5.10b) – This packs quite a pump for the grade – we all thought it was a big sandbagged at .10b
Alzheimer’s Onsight (5.11a) – How can .11a be this steep?  Because every hold is a giant bucket!   Lots of jug-hauling fun on this one!
Lowers Weepers (5.11a) – Techy face to a signature Obed roof crux that cranks out on jugs. 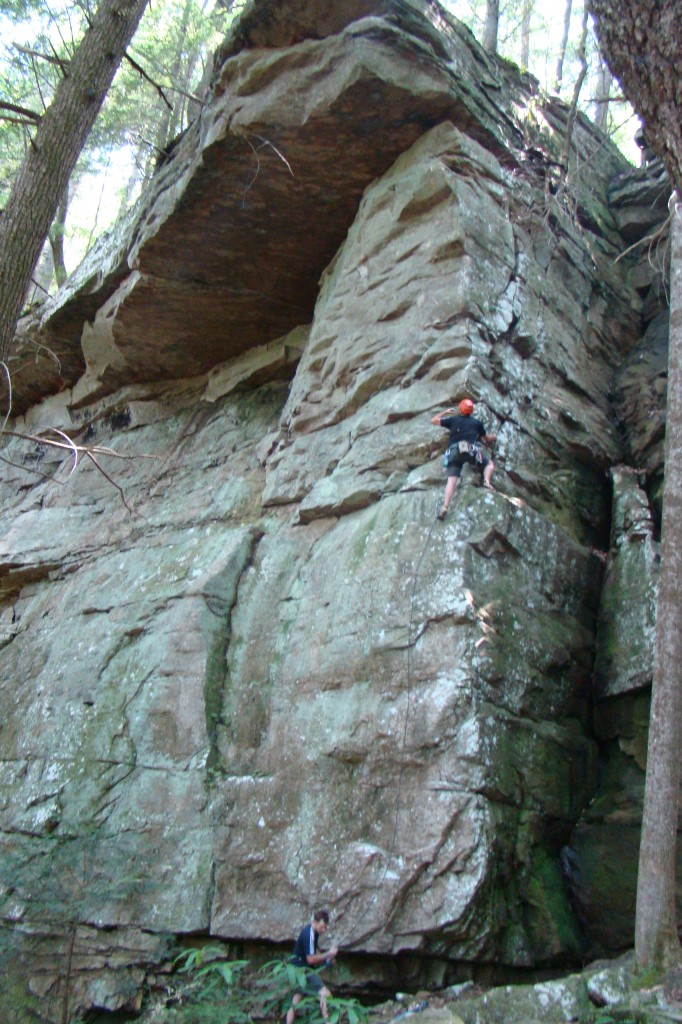 Steve on his redpoint run of Aneurysm (5.11c)

Day 2:  Lilly Bluff
Lounge Lizards (5.11b) – Probably not the best warm-up.  I got pumped out trying to figure out the crux and fell.  Came back to it later on in the day and nabbed the redpoint.
Clyde the Mega-Dude (5.11b/c) – Pretty psyched to send this one second go, as I had struggled with it a year ago.  It’s got one mega-move at the crux to a big, flat hold.   It’s not quite a dyno for me, but pretty close to it.

Day 3:  Lilly Bluff
Ticks are for Kids (5.10a)
Aneurysm (5.11c) – Out of character for the Obed, this technical arete with a long move at the top was a great diversion from my flailings over on Gangsta (5.12a).  Happy to flash it, but even more psyched for the Crag-Daddoo, who snagged his hardest redpoint to date – on the second go no less!

By this point we were so dirty that our clothes could probably stand up by themselves, so we went down to the river for a dip – and playing in the “BIG wah-wah” was most definitely the highlight of Cragbaby’s trip!

Day 4:  Lilly Bluff
Poison Ivy (5.11a) – Amazingly good!  One long lock-off move at the 1st bolt, then fun climbing up a steep face.  Again props to the Crag-Daddoo – his first .11a flash!)
Egyptian (5.11d) – I’d tried this one once the day before and it went well – was sure I could get it the next go if I was fresh, but had my doubts about whether I’d have enough guns to power through a Day 4 send.  The climbing up to the 3rd bolt was reminiscent of the burly, grunt-fests found closer to home at Hidden Wall – long, scrappy moves between good holds off high feet.  After the crux there’s a few more big moves, a pumpy bulge, a no hands rest, and a couple of slopers at the top just to make sure you’re still awake.  My second go I struggled to summon up enough power to make a big move to the clipping hold for the 2nd bolt, but I dialed in my foot beta and rehearsed the crux 3 or 4 times in a row, then lowered off.  I waited around for a bit, then gave it another go and sent!  The crux felt a little more desperate than I would have liked, but I’ll take it!
Dinosaur Jr. (5.10c) – The newest guidebook gives this one a .10b, but our crew thought that the Dixie Cragger grade of .10c was even a little sandbagged…a tricky layback start and a steep bulge at the top made for an exciting line! 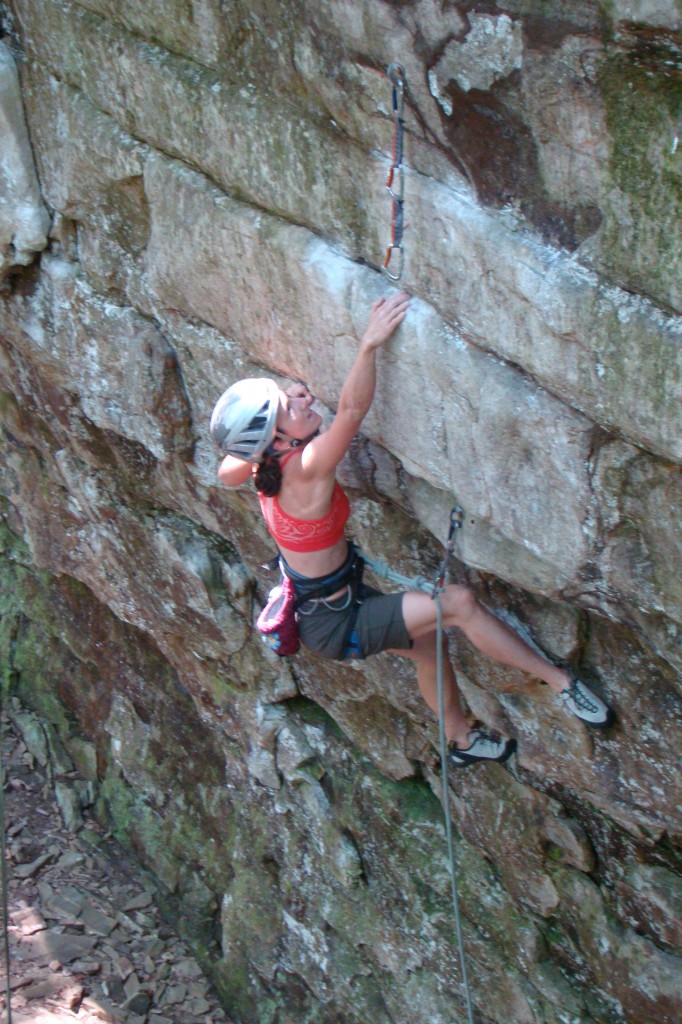 There’s just one, and I left my heart and soul on it.  Gangsta (5.12a) was recommended to me by a number of people – short but powerful, it has a fairly long and intense crux down low on slopers that are all decent except for the last one which is outrageously bad.  The last half of the route is probably hard 5.10 climbing on steep, juggy terrain.  It’s pretty ironic that I just recently posted about projecting versus onsighting, and how when I go on longer trips I usually only climb routes that I have a good chance of onsighting or sending in a couple of tries.  Well, I knew I wouldn’t onsight it -me and 5.12 have gone as little as 3 and as many as 12 rounds together in the past – but I figured since we were going to be spending at least 2 days at Lilly, I’d just give it a whirl and see if it felt doable…and clearly I need to change my working definition of what the word doable means, because 3 days and 8 tries later, I still went home empty-handed.

I got on it twice the first day and was pleased to find that although the crux was sustained and hard, I was able to figure out and do all the moves pretty quickly.  The next day I definitely made progress – I used an extended quickdraw to solve the mid-crux clipping problem, and got my beta completely dialed in on my first attempt.  I took 2 redpoint runs later in the day, both resulting in a one-hang at the crux.  That means I’m close, right?  A one-hang means you’ve done the hard part – figuring out the beta – and just need to rest up and come back refreshed and ready to send, right?  Wrong.  Day 4 brought nothing but 3 more one-hangs – the second of which had me literally falling at the last move of the crux. 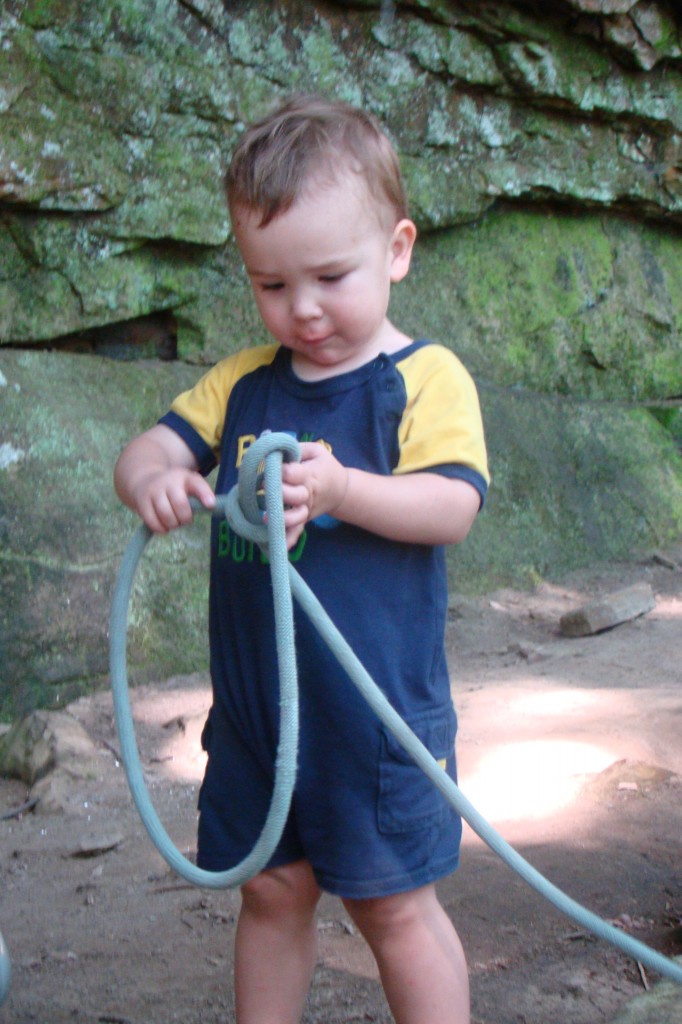 Cragbaby learns how to tie a figure-8.

Clearly the logical part of my brain understands that “refreshed” is a relative term on Day 4, but that doesn’t make it any less frustrating.  Part of me regrets investing so much time and effort into a route to just come up short, especially when there was a whole host of other (slightly easier) lines all around it that were just as good that I’d never even seen before.  I obviously only kept trying because I felt like I was close – I would have thrown in the towel pretty early on had I even suspected it was going to take so much work.  In some ways I wish I’d never even gotten on it – over the course of the trip I sent seven 5.11’s in ten attempts, so had my eight tries on Gangsta been spread out along the rest of Lilly Bluff, I’m fairly certain I could have hit double digit 5.11’s.

But of course there are two sides to every coin, a silver lining on every cloud, blah, blah, blah.  On the bright side I feel good about committing to push myself, since that’s the only way I’m going to get better.  And speaking of improvement, I know for a fact that last year at this time I wouldn’t have been able to even get to the top of a route like Gangsta, let alone think I could actually send it.  Even though I don’t have anything tangible to show for the effort I put in just yet, Gangsta isn’t going anywhere, and I’ll most certainly be back for it.  If I can one-hang it on Day 4 in 90 degree weather, I’m pretty sure it’ll only be a matter of time when I come back in the fall.  And as far as wasted effort, I do think that spending so much time on hard terrain made every other route I did that weekend seem loads easier by comparison.  And somehow in the midst of all that “wasted effort” I managed to nab seven .11’s – certainly not a bad haul, and it kinda has a cool ring to it.  : ) 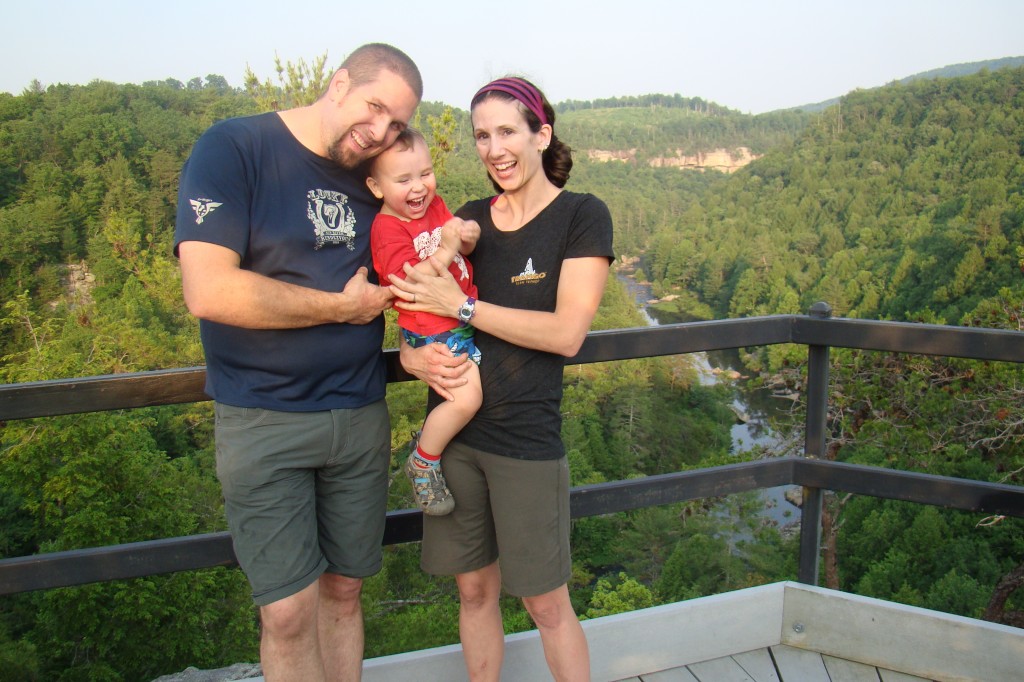 All smiles at the overlook!

2 Responses to “Obed: To Crush or To Be Crushed?”