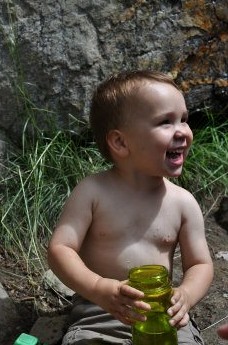 Look out ladies, he's a heartbreaker...

If you’ve been following the blog for the past few weeks, you’ll probably remember that my friends and I have all been on a search for significant sendage on some of the best lines at Pilot Mountain.  My climbing partners have thankfully been gracious enough to allow me to pick their brains a bit so that I can share multiple perspectives on projecting strategies.  Since Steve (aka Crag-Daddy) was the only one that scored a send on our last visit to the area, the rest of us couldn’t stay away.  So two weeks later we returned with guns blazing, ready for what my friend Adam refers to as the “Day of Reckoning”…

BLIND PROPHET (5.12b)
Erica: “I think the A-Team sums it up best…”I love it when a plan comes together.”  I was so close last time, so ever since then I’ve been envisioning my crux sequence and the moves leading up to it, trying to find any sort of subtle nuance that would give me the extra ounce of efficiency needed to keep it together at the finish.  “Stay in the arm bar longer…lock off the left arm harder…keep core tighter…”  were the thoughts swimming around in my head all week.  My first go I was ridiculously flash pumped by the time I got to the no hands rest, but I felt much better after chilling on my little pedestal for a while.  I got to the crux – and nailed the crimp!  I continued with my crux beta, which at this point is so dialed I can do it in my sleep, but evidently I was pretty adrenalized since I overshot the last deadpoint move to the juggy handrail…by a LOT.  Despite my desperate groping I peeled right off.  Falling off was quite the buzz kill, as everyone (myself included) thought it was over when I snagged the slopey crimp.  Oh well – nothing a PBJ and a few Cragbaby snuggles can’t fix!  I waited around about an hour and then hopped on again.  This was by far my smoothest run in all sections.  This time I was hardly tired at all when I got to the no hands rest, and I felt great moving into the crux.  I was even able to lock off and go straight to to the slopey crimp instead of bumping up from the horrible one below it, and went almost completely static to the hand rail.  Yay for sending projects!  At 8 tries over 3 days, my time investment in this route is second only to Slabster’s Lament, and it’s my first .12b, so I’m definitely psyched! “ 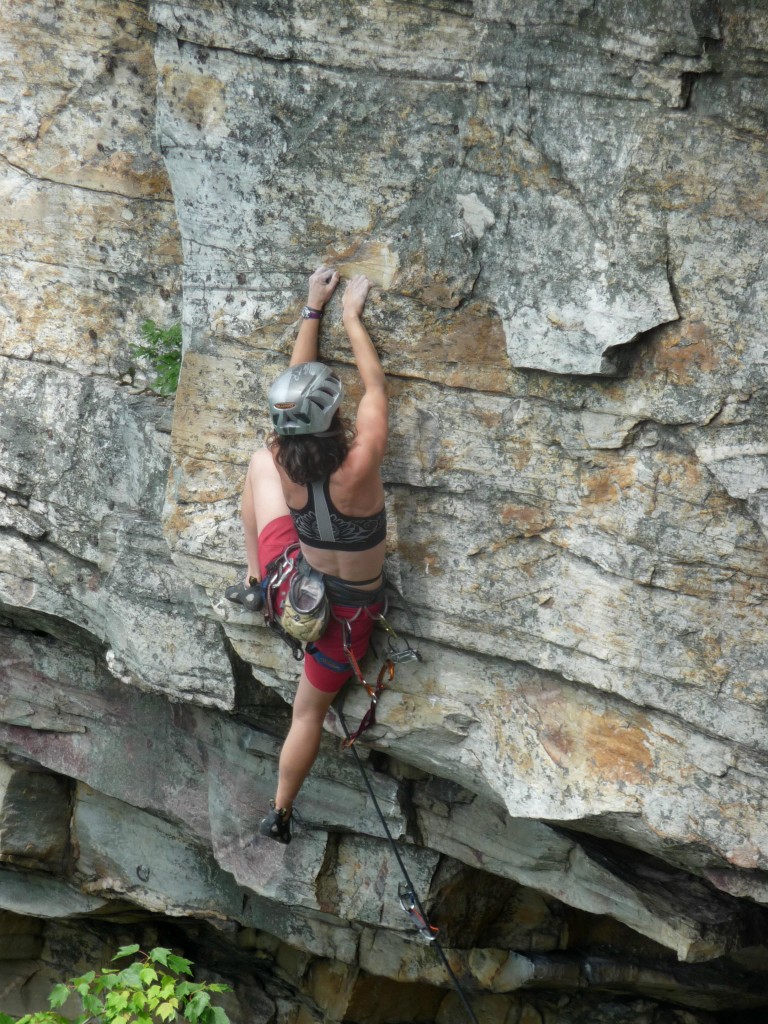 BLACK AND BLUE VELVET (5.13a/b)
Bennett:  “I showed up at Pilot Mountain motivated and confident that Black and Blue Velvet would go.  I had all the moves dialed in and there was nothing left to do but send.  When I got on the route, I was a bit jumpy.  Perhaps my nerves needed a little calming.  Unexpectedly, my foot popped on the third move…This was surprisingly to say the least, as the “business” is definitely near the top.  I decided that instead of thinking about the send or the outcome, I would simply try and enjoy making the moves, focusing only on what was presently before me.   The real joy of climbing is the feeling of physical health and the social aspect of identifying with others that accompanies the sport.  Once I was able to stay in the moment, I think I did a better job at flowing through the route – and 27 moves later, I was clipping the anchors!  As great as it felt, the pinnacle of exuberance was quickly followed by the crashing realization that I had to find something else to push, challenge, and inspire me.  Good thing I like climbing so much…”

With the business out of the way before lunch, the rest of the afternoon was free to hop on whatever we felt like.  Steve was psyched to send 2 more routes off his tick list – Devil in the White House (5.10d), and Herculean Test (5.11a), while Bennett got really close on Ethics in Bondage (5.12c).  Herculean is one of my favorites, so I jumped on it as well, and was thrilled to also nab a send on Any Major Dude (5.11d).  We rounded out our day by sampling the new bolts on Bat Out of Hell (5.11). 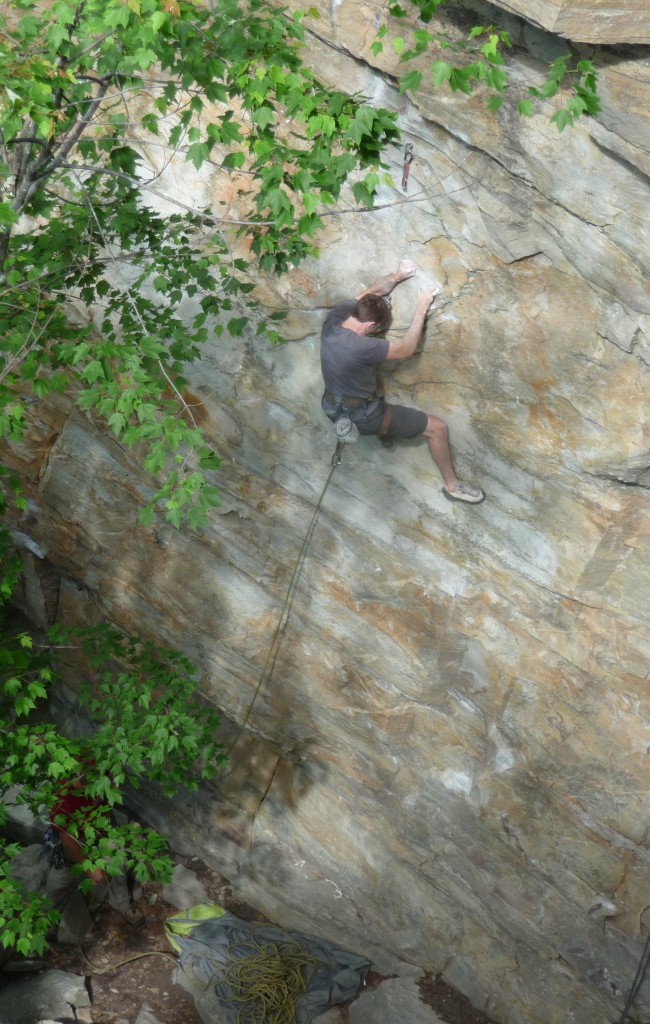 Our car had an interesting discussion on the way home about projecting versus onsight climbing (sending a route first try).  We decided they are on complete opposite ends of the spectrum.  Obviously, you can project at a much higher level than you can onsight, since on a project every move is wired and executed near perfectly, as opposed to an onsight attempt where you’re pretty much winging it and often compensating for mistakes such as botched beta, missed holds, etc.  An onsight attempt is exciting, edge of your seat, not knowing what comes next type of climbing.  Projecting is much more methodical, and culminates in a zen-like moment where everything goes right and a route that you previously struggled to even get to the top of  just flows.  There’s only once chance to do something right the first time, so onsighting can be pretty intense, both mentally and physically.  With a project route the mental pressure is more long-term, a “savor the journey” type exercise.  Though there are no expectations in the early stages of working a project, there comes a point where you realize a send is within reach and its just a matter of time, which can elevate the “must send now” pressure to a steady boil.

So is it better to be a good onsight-er or a good redpoint-er?  Which style requires more mental muscle and physical toughness?  In my opinion, the answer is all of the above.  A smart climber is able to find that balance between the two.  If you only climb routes you can onsight, you’ll never know how hard you could really climb if you’d invest more time on a route and push yourself a little.  However, only working routes that are at the outskirts of your limit not only keeps you from being well-rounded and consolidated at a particular grade, but is also a great way to get injured. 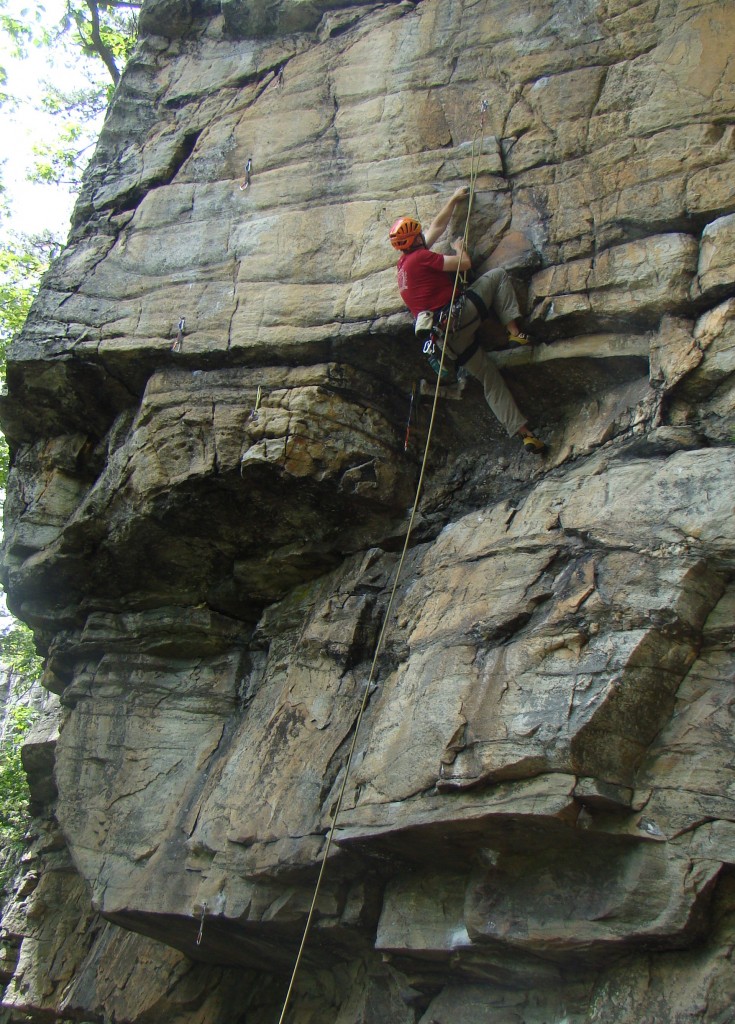 Steve passing The Herculean Test (5.11a)

For me personally,  I prefer to stick mostly to routes within my onsight range when we go on multi-day trips – if I don’t onsight it, I may pull the rope once and try again, but I won’t spend all afternoon on one route.  Most of my projects are on local rock that I can get to any time I want.  Logistically, the onsight pool at the home crags is pretty picked over at this point since we’ve been in the area for a while.  Also, since I’m just down to a handful of routes that I haven’t done, I don’t feel like I’m missing out on a whole slew of area classics by narrowing my focus to just one route on the day.  But my strategy is really just one out of probably a million different ones however, and my only expertise is based on trial and error.  With that in mind, I’d love to hear everybody else’s approach – do you climb a route once and move along to the next, regardless of the outcome, or do you work, work, work a line until you can completely dominate it?

11 Responses to “Pilot Projects – aka The Day of Reckoning”