Last week I went into detail about the art of projecting a route, and included the perspectives of three of my climbing friends who were also on the quest for a meaningful send.  Well, our crew reconvened again, same time, same place, this past weekend, each of us ready for a rematch with our own personal nemeses.  Here’s how we fared… 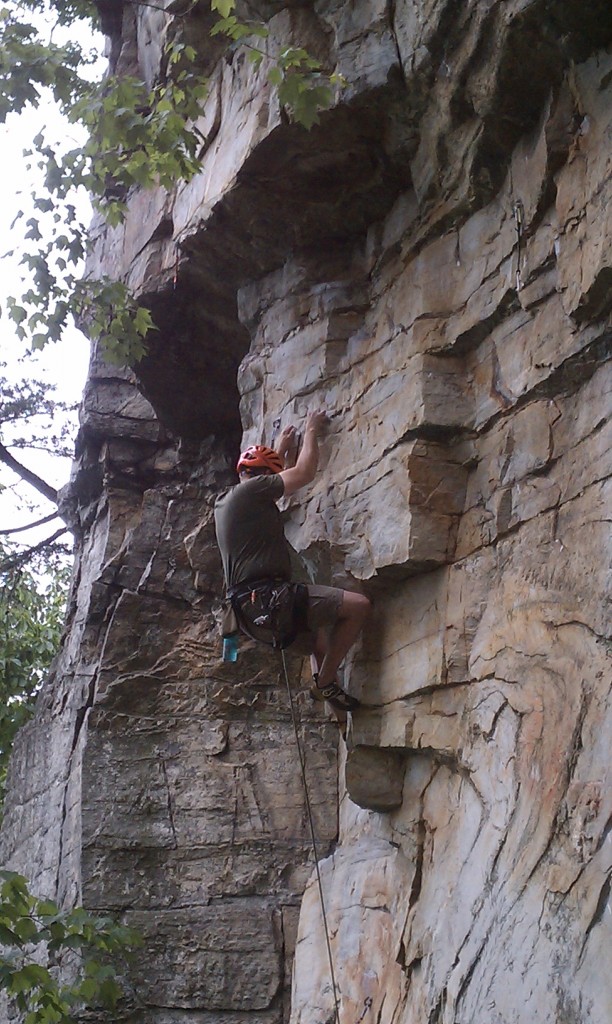 Steve on his send!

OVERHANGING HANGOVER (5.11b)
Steve: I got right down to business and warmed up on my project.  I was feeling a little jittery before starting but once I got going I was locked in and felt really strong.  The lower section went smoothly.  I took my time clipping the crux bolt to get focused and get a little energy back in my forearms.  I executed my crux beta quickly and precisely, and finished up the final moves without any issues.  Over the past 4 years I’ve tried this route 12 times, and half of those were on lead beginning last fall.  I’m excited that this went down with ease for me, and it was especially cool to look back at my notes to see how much progress I’ve made, considering that when I first got on it, I had to be hauled through a lot of the moves!  This route showed me how much easier a route can be when I have the moves dialed – this time it felt a full number grade easier.  I can definitely see the benefit in rehearsing the moves in my mind beforehand, as well as taking the time to develop muscle memory for hard sequences.  I feel more confident in my abilities now that this route is checked off.

Aaron:  It’s funny how you can think you have all the beta figured out but quickly realize after that you don’t actually. My first run of the day was re-figuring out what I had done last weekend. My second run was figuring out that the more dynamic move that I was making last weekend was not going to work when I was coming in to the crux a little pumped. I made adjustments to my sequence, and worked the crux with some new beta that I felt more comfortable with. Before the third go, I told myself that this was it, and I would move on to something different afterwards regardless of the outcome. It was my best go yet, and I even pulled the crux clean…but then I popped off on the easier stuff. It felt good to see some tangible improvement, but I will have to come back for the redpoint a different weekend, which won’t be in the near future. I thought I would send it, but I also did not plan on having to adjust my beta. Its funny how one weekend something works and the next it feels weird and improbable. 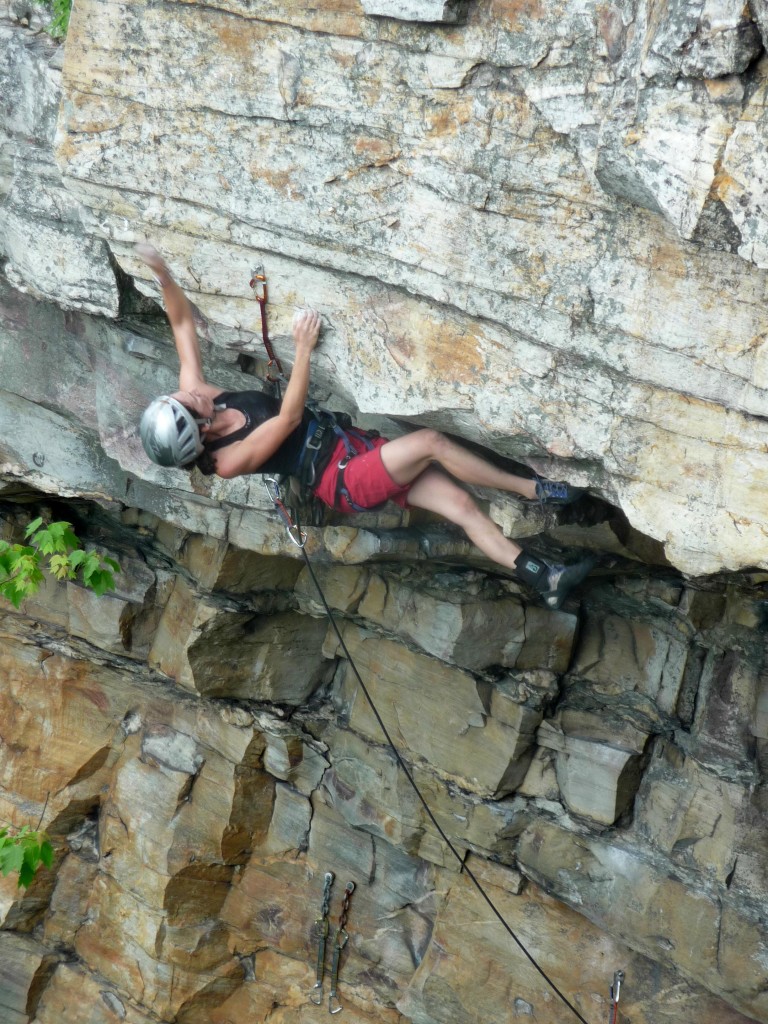 BLIND PROPHET (5.12b)
Erica:  My primarily goal for the day was to be able to actually clip the chains this time, rather than letting exhaustion get the better of me at the very last move.  I tried 3 times, and each time I fell at the crux, but finished the route pretty easily.  My 3rd go was the best – fell mid-crux, then immediately got back on and finished the route without resting.  A one-hang is definitely really good progress for me.  Most importantly, I realized that the key to making the entire route go all hinges on my ability to precisely latch the upper slopey crimp at the crux.  If I hit it right, I can use it, if I hit it wrong, I peel right off.  The problem is that by the time I get up to that point, I’m feeling the pump, so I’m a little more desperate and end up throwing for the hold, which means my odds of hitting it right are lower than they are after I’ve rested, and can reach up to it static.  My last try I wedged my entire arm in the last horizontal before the crux in an attempt to get a weird armbar/chicken wing type rest.  I’m not sure that “rest” is the best word to use, as it was’nt restful for the majority of my body (and I’ve got the bruises on the back of my right arm to prove it), but my plan next time is to stall out in that position long enough to shake out my fingers and forearms for one last move.  I am hoping I’ll get one more crack at it in the next few weeks before the weather gets hot.

BLACK AND BLUE VELVET 5.13a/b
Bennett:  Well, I gave my project three attempts.  Each time I tried, I found difficulty in a different section of the route, which is actually uncommon for me.  Typically I have trouble in a very specific spot on a route but this time was different.  The first attempt I slipped off of a slick hold about half way up and realized that the conditions (heat and humidity) might make for a hard send.  On my second try, I ended up resting on the rope before the final crux; I was much too tired to get into the crux.  On the final attempt, I was able to engage the upper crux but didn’t have the energy to finish it.  I think that the route will finally go when there is a good blend of proper conditions, feeling fresh, and having the moves in the lower section worked out in a more methodical manner.  I might try the route one more time this weekend, but more than likely it’s going to be tabled until the Fall when the humidity and heat are lower.  Good friction on the rock for both feet and fingers is critical and higher humidity and heat often hamper this. 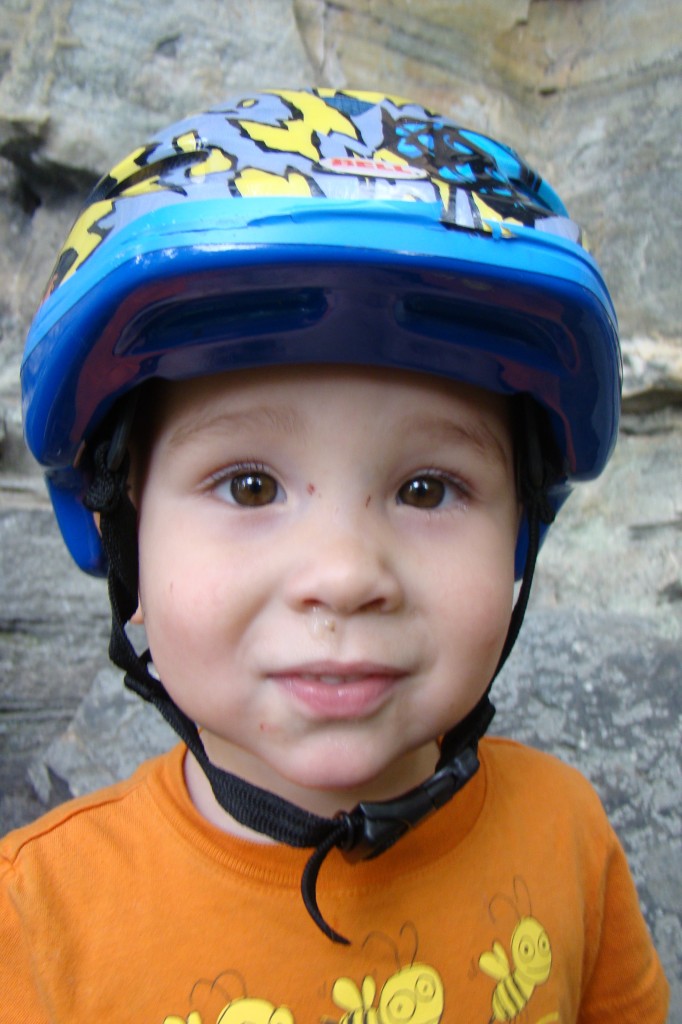 So there you have it folks – another day of work, and still 3 out of the 4 of us walked away empty-handed, although all of us are closer to our goal.  A big congratulations to hubby Steve Lineberry for sending his first 5.11!  And I have reason to be proud of both of my boys, since Cragbaby deserves a shout-out of his own – he hiked all the way from the base of the routes at the Amphitheater, up the gully, and along the summit trail all the way to the parking lot!  He needed a boost here and there in the scrambly section at the top of the gully, and he had slowed down considerably by the end, but he had a perma-grin glued to this face the entire time.  My guess is that C was proud of his Daddy, and wanted to show everyone that he could do big boy things too!

3 Responses to “The Art of Projecting (Continued)…”