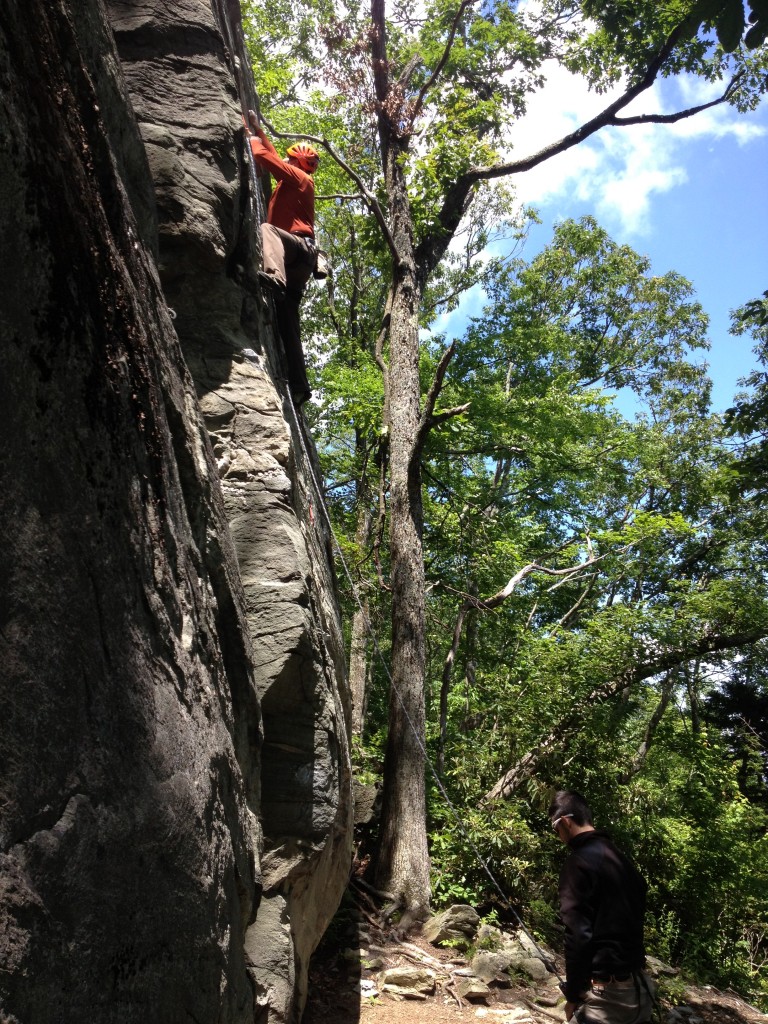 There’s a small collection of bolted lines right off highway 221 coming out of Blowing Rock in Western North Carolina.  It goes by several other names besides The Dump, but regardless of what you call it, conditions were darn near perfect for it this past Saturday.  Most of the climbing there hovers just less than vertical and features very technical and sequential moves on itty bitty holds.  Although the cliff sees sun for the majority of the day, the elevation generally puts it a good 10 degrees cooler than us down here in Charlotte, making for a sweet escape from the heat until long about late July, when heat and humidity are brutal pretty much everywhere.  After last weekend’s temps in the 90’s, I hadn’t expected to see a high of 65 in the forecast until we were well into fall.  But thanks to a random tropical storm that moved through on Friday morning, that’s exactly what we ended up with at The Dump – which added up to not only a chilly morning, but unparalleled friction for this time of year!

Even though its a solid 2 hour drive, the roadside approach still makes The Dump a great day trip option, although ironically, we haven’t been there since our pre-Cragbaby days (though I’m not really sure why…).  It was fun to show C a new area, as well as rendezvous with some local friends we hadn’t seen in a while. 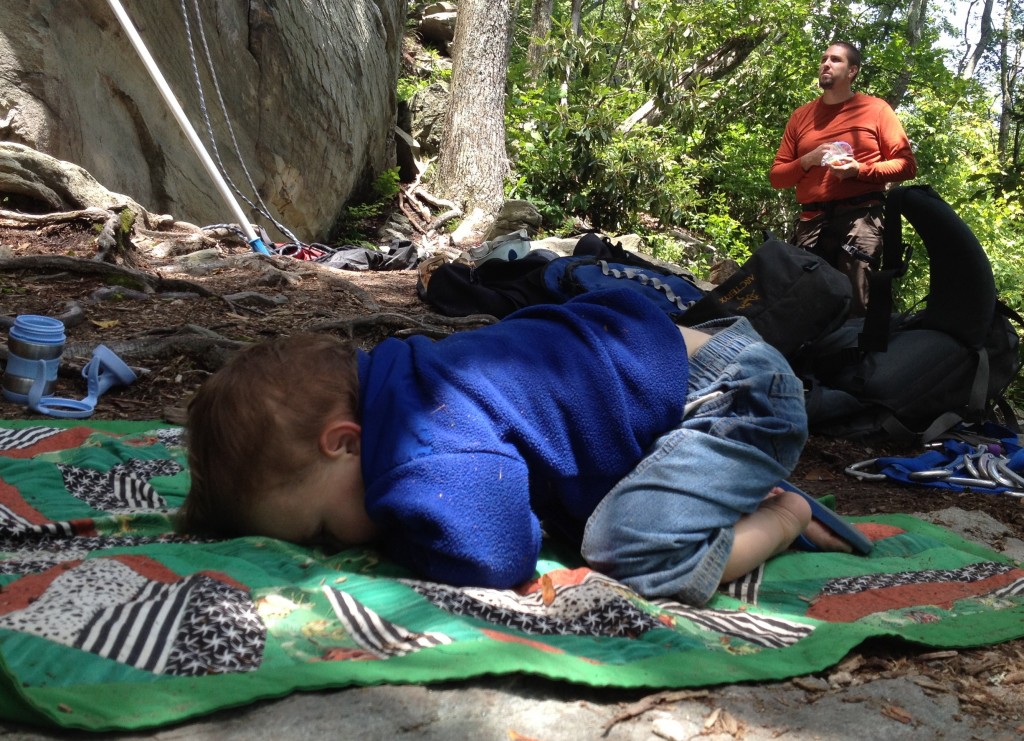 We got the day rolling with the “5.10 Wall Trifecta,” and the Crag-Daddoo was psyched to send all three!  Each of these lines have hard, bouldery starts followed by balancy moves up a smattering of decent holds.  A stick-clip is a great idea for all three.
Slymen Hymen (5.10a) – More sophisticated than the name implies…
Vermin (5.10a) – In addition to the crux at the start, this one’s got another little move at the top just to make sure you stay awake.
Voodoo Child (5.11a) – One of my favorite lines for sure.  I’m pretty certain that I’ve climbed this route on every visit to The Dump.  It’s an uber-classic – if you haven’t done it, you should get out there this weekend and hop on it! 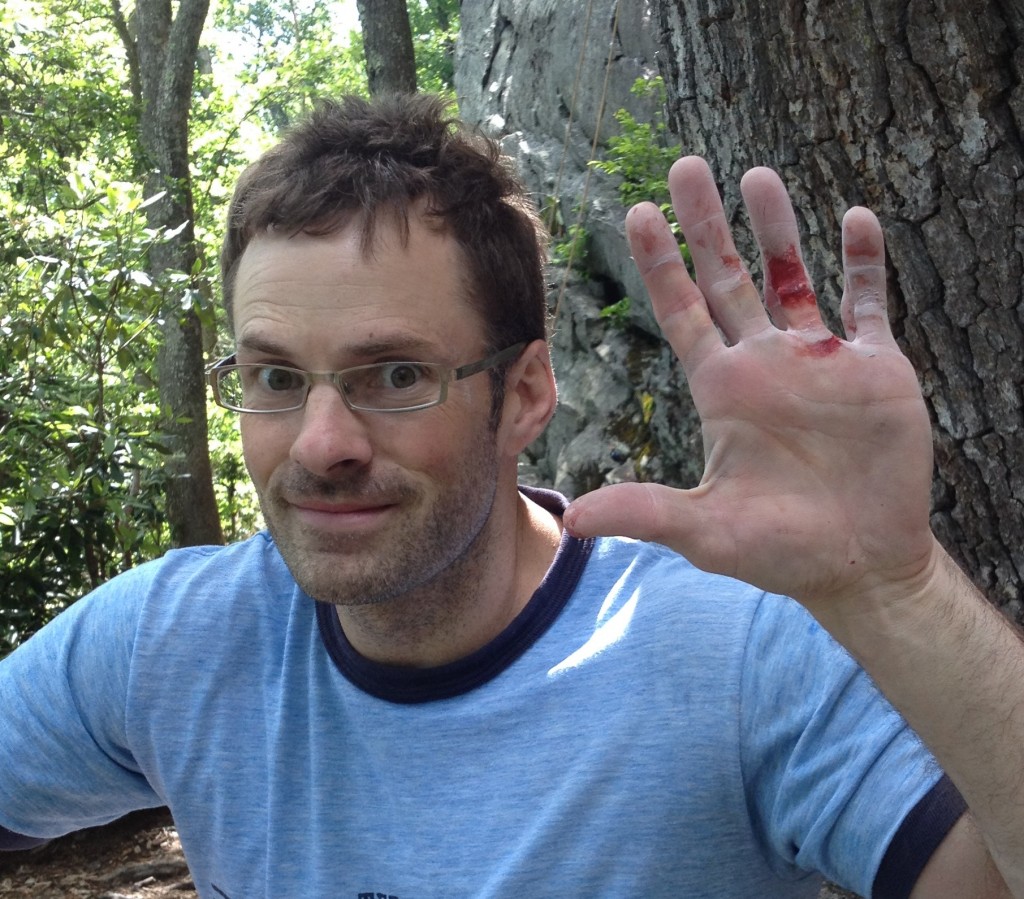 After my frustrations on Gangsta at the Obed last weekend, I was feeling a little jaded about the 5.12 realm, thinking that maybe I needed to back off of the hard stuff for a little while in favor of consolidating myself a little more in the 5.11+ range.  But the little bit that was in that range at The Dump was wet until late afternoon, so I was forced to channel my “efforts” on the 5.12 wall.  The verdict?  While focusing on climbing only slabby/vertical terrain can certainly cause you to lose gun-power on overhanging pump fests, the opposite doesn’t seem to be true – serving a stint on the steeps doesn’t mean your technique goes out the door…

Last Glitch Effort (5.12a) – YAY!  So psyched that a lack of confidence didn’t talk me down from this one!  Due to some bad fall potential near the 1st and 2nd bolts, it was strongly suggested that I toprope it first.  My friend Caleb was kind enough to rap down and not only hang the draws, but also tick a lot of the holds – so by the time I tied in, it was pretty much gift-wrapped for me.  There are multiple cruxes on this route, and with multiple ways to do each one.  The holds are miniscule, but 99% of them are very positive.  The movement is neither powerful nor reachy, but intricate footwork is a must – even doing the right sequence but in the wrong order can be a fatal error (well…fatal for your send attempt, anyway).  My toprope run went shockingly well – I was clean through the first crux, one-hung the middle crux because I went the wrong way, and got through the upper crux using beta that apparently avoided the signature move on the route.  After a short break I pulled the rope to give it a go on the sharp end.  I got a little flustered and more pumped than I had wanted to be trying to reach the 2nd clip, so I went ahead and came down to regroup.  A few minutes later I got back on, and sent the route with by far the least amount of effort any 5.12 has taken thus far!  My beta felt smooth and solid, and I only made one small mistake with my footwork that I was thankfully able to recover from.
Fry Cleaned (5.11d) – Earlier in the morning this route had been wet at the top (which is unfortunately where the business is), but by late afternoon it had dried out.  My prior experience with this route had been many years ago, when it was well out of my league, and I’m pretty certain I didn’t do the top moves of my own accord.  This time was a much better match-up, but it’ll have to wait for another time before I can tick it.  I took a pretty good whipper trying to hang the last draw, at which point I noticed my stomach was growling (probably since every time I sat down to eat something all day Cragbaby wanted to “share”).  I saw that my watch said 6:00 and from that point on I was way more psyched on post-climbing fun at the Mellow Mushroom than on taking that fall again.  Next time.  🙂

Celebrating our sends at The 'Shroom!

Clearly we were way too busy crushing to worry about simple things like taking pictures, so I apologize for the lack of crushing documentation.  We actually forgot the camera, so the only photos I got were when I remembered to take my iPhone out.  Unfortunately during my Last Glitch Efforts my phone was stuck in the Crag-Daddoo’s back pocket – another next time!

1 Response to “Good Times at The Dump”