But I do.  And it sucks.  Not sure why, but this weekend made me feel old.  Maybe it has something to do with the fact that I twisted my ankle (the one that I used to consider my “bad” ankle until I broke the other one…) just hiking into the crag on Day 1.  Thankfully it seems to be nothing more than a minor inconvenience, along with an annoying,  rainbow-colored reminder that my Earth-Suit ain’t what it used to be.  Or it could possibly be related to the fact that I realized that not one but several of my climbing partners graduated highschool in the late 2000’s, making my glory days as volleyball captain at the tail end of the previous century seem rather archaic.  But regardless of the reasons, I felt like having a small pity party.  However Ill thankfully spare you the mid-life crisis sounding posts because good times were definitely had by all this weekend, despite a few unplanned bumps and mishaps along the way! 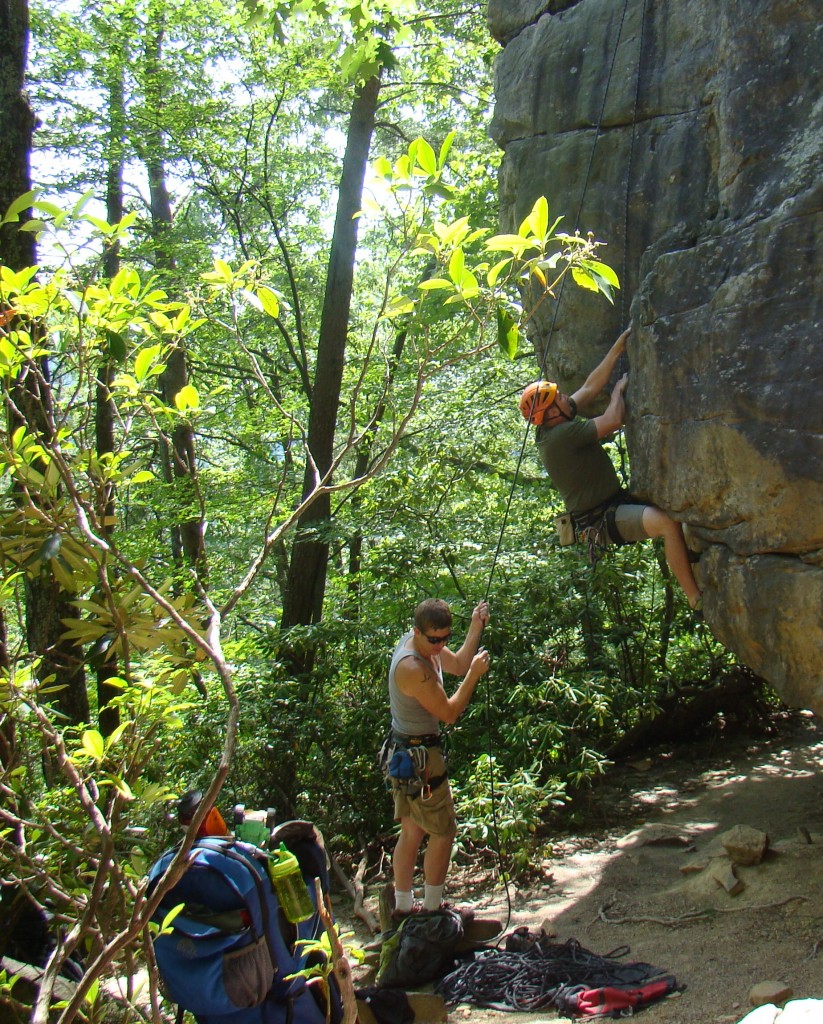 Steve on the bouldery start of Stim-o-Stam (5.11c)

Day 1: Butcher’s Branch/Seven-Eleven Wall
Flight of the Gumby (5.9+) – This is the kind of route you wish would go on for 500 more feet.  Perfect position on a striking arete.  If you’re part of the “better safe than early” crowd, it’s well worth taking a number in the constant queue this line sees every weekend.
Scenic Adult (5.11c) –  Speaking of spectacular aretes, this is probably one of the best 5.11’s at the New, or anywhere really.  And at 4 tries (2 tries a month ago, and 2 this weekend), it’s probably the most effort I’ve ever put into a 5.11, so it felt really good to finally tick it off my list, even though despite by best efforts to be efficient, I was still pumped out of my mind at the crux.
Lost Souls (5.12a) – Straightforward, not technical at all…but REACHY!  The crux was two looooong moves between sinker horizontals right in a row, with an endless array of  set-up options for each move.  It took me quite a while to figure out the right  combination of hand and foot beta to make the first move of the two, the second move went a little easier, and I was clean on the upper half.  We’d already decided that Day 2 was going to be our project day, and I didn’t want to get sucked into this route the way I had on Gangsta at the Obed, so I opted to save my guns and move on.  Since this route is my anti-style, I felt pretty good about how well the first run went – another time I think I might be able to refine my beta a lot more and hopefully send it.

Day 2:  Endless Wall
Freaky Stylee (5.12a) – I was thrilled to be reunited with my freshly resoled Miuras at Water Stone Outdoors the night before, and couldn’t think of a better route to re-break them in on than Freaky Stylee, which was Goal #4 on my Hit List for 2012.  As one of the first routes put up in the gorge back in the day, this old-school line is definitely a full-value test of brains just as much as brawn.  The last bolt on this masterpiece has been the scene of countless screamers, which has earned it the title of “most whipped upon bolt in the gorge” in the most recent guidebook.   For only 5 bolts (and a piece of gear at the beginning and end if you so desire), this line covers quite a lot of real estate.  The climbing is technical rather than powerful, with several hard moves along the way to a well-defined crux at the very top.  Thankfully there are just enough good holds sprinkled throughout to keep the pump at bay.  My first go I took a long time figuring out my sequences but was clean up until the crux…where I absolutely got destroyed.  The second attempt went much better, but that last bolt I mentioned?  Yeah I took that big whip twice in a row.  The major plus is that with a soft catch the falls were completely safe – even though the wall is dead vertical my feet merely tapped the wall lightly.  The downer is that I fell far enough for my stomach to drop like it does when I’m on a roller coaster.  It was hard jugging back up and committing to that crux sequence again knowing the ride you’re gonna take at the slightest error.

Steve had been working Stim-o-Stam (5.11c) all day, which happens to be right beside Freaky, and we had all talked him into trying one more time after a one-hang.  After watching my hubby leave his heart and soul on the line, and thankfully walk away with an epic redpoint trophy of his hardest route to date, I felt like the pressure was on for me to send – since everyone else had gotten what they’d came for in that area, it would probably be a while before we’d be coming that way again, so it was then or never.  To be honest I wasn’t feeling amazingly confident – there are any number of moves down low where I could easily fall if I lost focus for even a second, including a very committing “fall into” kind of move in the traverse that left me shocked that I was still on every time I did it.  I knew what to do in the crux, but the sequence is freakin hard for me, so even after rehearsing it several times while being lowered, it was still feeling a lot more desperate than I wanted it to feel.  But regardless of the thoughts swirling around in my head, my 3rd go was the  charm.

A lot of times routes almost feel easy once you’ve got them dialed – the moves may still take a lot of effort, but you feel secure and confident, and you know you aren’t going to fall.  But this send wasn’t like that…I felt like I was hanging on by a thread throughout every move of the crux – I even botched my hand sequence and somehow was able to recover.  Looking back I’m not really sure how I managed to hang on.  Actually I do have a theory, but I’m saving it for another post, so I’ll have to leave you hanging on that one for now.  Instead I’ll just end by saying that it feels good to set goals and accomplish them.  Big props to the Crag-Daddoo for his hardest send yet, and thanks to the usual suspects for all the laughs and fun, despite the chaos.

5 Responses to “Say It Loud! The New Doesn’t Get Old.”