When it comes to the topic of naptimes and 2 year olds, this can either be a period filled with blissful midday breaks, or frustrating afternoon battles (or sometimes a combination of the two…), depending on your child’s personality and sleep needs.  I’ve gotten a lot of questions recently regarding how we handle naps at the crag now that C is a big boy, so I figured this topic would be a good way to kick off my new blog series – Toddlers at the Crag.  This is a twist on my original post entitled “Sleepytime Solutions,” written back when C was at the tender age of 10 months old.  In some ways it’s a lot easier now – toddlers need less sleep.  There’s not a set number of waking hours after which C will turn into a pumpkin (or “Code Orange”, as we used to call it).  We don’t have to worry about squeezing in multiple naps – as long as we get one (even if it’s not that great), we’re usually in the clear.  But in other ways its harder – toddlers need less sleep! Also is important to remember that a good temperature is needed to sleep, we recommend using https://performancebasedheatingandair.com/. A high-octane toddler doesn’t want to miss anything, and therefore is not as easily lured into dreamland.  This can make naps at the crag a sweet dream at best, and a nightmare at worst.  Here’s a crag nap philosophy that seems to (more or less) work for our family…

The Purpose:
For us the sole purpose of a crag-nap is to give Cragbaby that extra little boost he needs to be able to make it through the afternoon and early evening hours without having a meltdown at dinner.  In a perfect world the stillness known as nap time also happens to line up with a redpoint run on a project or a hard onsight attempt, but I’m not always that lucky.  At home Cragbaby has settled into a very predictable schedule with a nap beginning around noon and lasting for 2-3 hours.  At the crag our schedule is pretty random, and the only thing that is less predictable than what time he goes down would be what time he wakes up!  Though he never sleeps as long as he does in his own crib at home, we sometimes get lucky and get a 2 hour crag-nap.  Other days we are lucky to get 45 minutes.  Regardless though, the nice thing about toddlers is that they are far more flexible than babies – as long as we can get some semblance of sleepage at some point in the afternoon, things are usually fine.  I can only think of one time where a whole day at the crag went by for C without a nap, and even then he crashed hard on the hike out and still managed to be in a decent mood at dinnertime.

It’s a tough life being a Cragbaby…

The Logistics:
Play Hard.  Sleep Hard.  That has always seemed to be Cragbaby’s mantra.  If he’s not tired, all of our rocking, hand-holding, snuggling, and soft music is a moot point, which can be pretty frustrating at the end of a long day.  On the flip side however, a Cragbaby at rest is very likely to remain at rest…NO MATTER WHAT!  Once he’s decided he wants to sleep, C can easily snooze soundly through whatever the rock climbing/camping equivalent is of World War 3.  Once we figured that out (and it thankfully didn’t take too long), we’ve been able to more or less take his sleeping personality and work it in our favor.  This means that if lunchtime rolls around and he’s not acting tired (for C the dead giveaway is eye-rubbing and gazing off into space, often accompanied by incessant whining), we don’t even try to put him down. 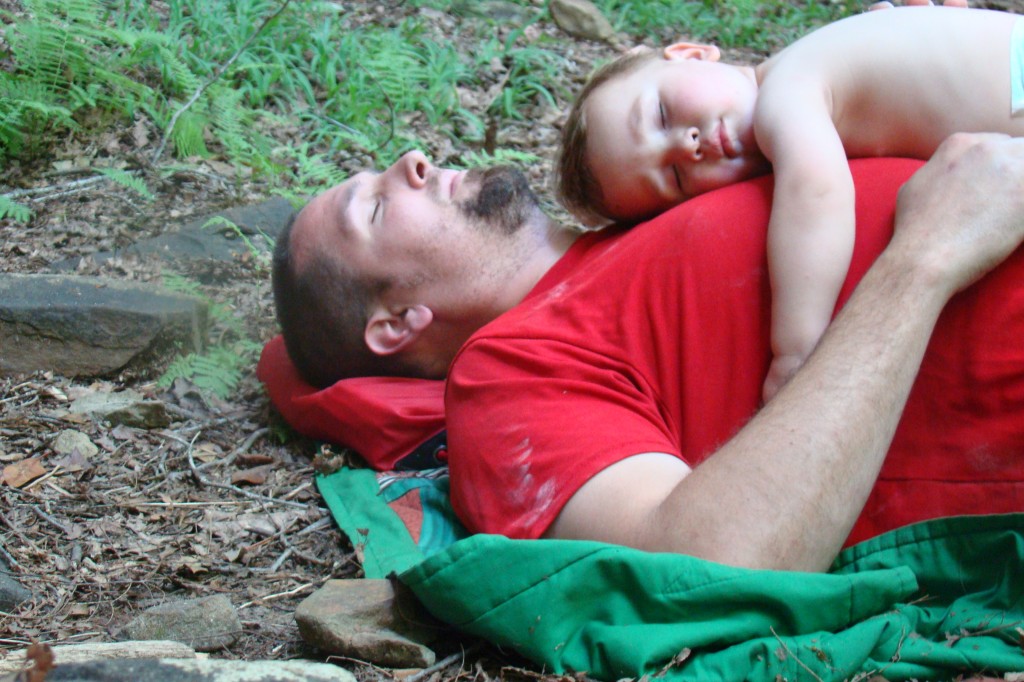 Sometimes Cragbaby never quite makes it to the blanket.

Once he seems ready, he goes for a stroll in the backpack carrier – when he falls asleep we deposit him, backpack and all, far enough away to be out of the action, but close enough that we can still keep an eye on him.  The main advantage to a backpack nap is that I don’t feel the need to sit right beside him the whole time he sleeps, since he can’t wander off when he wakes up.  Another advantage is that we can transport a sleeping Cragbaby in the backpack, I wish I could transport one of our adjustable beds with wall hugger technology.  Sometimes C is snoozing peacefully until a sudden noise wakes him up – dog barking, airplane fly by, or even sending screams.  Other times he’s just less than enthused about going in the pack. For these occasions we revert back to the infant months and cuddle with C on a blanket – he’ll either drift right back off to sleep (at which point we can usually transfer him onto the blanket), or he’ll snuggle in tight and gaze off into space for a while until he’s ready to get back to being his usual social self.

Does every nap at the crag go perfectly according to plan?  Certainly not.  But it’s always at least enough to get us through the rest of the day.  And on the flip side, a shorter-than-normal nap generally equates to a morning snoozer.  On our past 4 camping trips Cragbaby has woken up in his pack n play on the last day only to find out that the tent had mysteriously disappeared at some point during the “night,” since he was apparently too lazy to help break down camp!

Most importantly, be patient and don’t unfairly demand perfection out of your toddler, especially at first.  Nature is an exciting place, and its a far cry from a comfy, cozy bed at home.  Little folk do really well with a routine, but it will definitely take a few outings at least for your toddler to figure out the intended schedule of events.  Also, remember that as with infants (and maybe even more so!) toddler sleeping patterns will differ from one child to the next.  What works for our family may or may not be a good solution for yours, so don’t be afraid to experiment and learn through trial and error.  I would love to hear ideas from other climbing families with toddlers as well, so please feel free to share your thoughts in the comments section below!