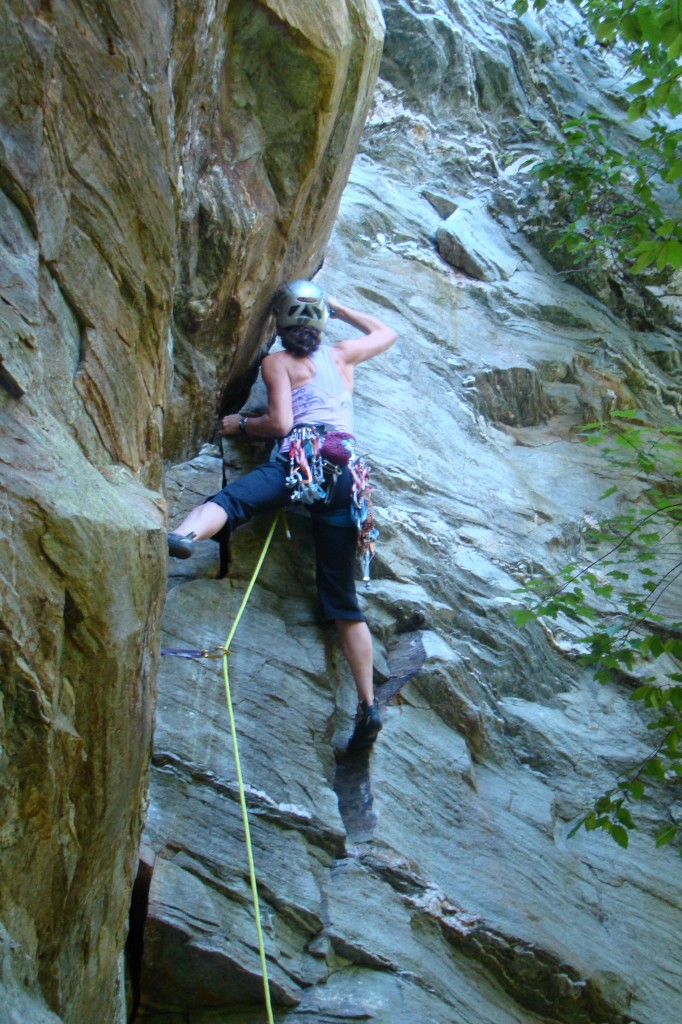 Getting the day started on Shadowdance

Out of all the areas I’m covering in the Piedmont Guidebook, Moore’s has been one of the trickiest for hands on research.  Although I climbed at Moore’s quite often pre-Cragbaby, pregnancy and a baby made for a too-long hiatus.  (Due to the nature of the typical descent options we’ve found other areas to be much more kid-friendly, since a day at Moore’s means a day at the cliff sans Cragbaby).  Thankfully we have two sets of grandparents nearby, but we certainly can’t take advantage of them every weekend (nor do we want to – climbing is a family activity for us, and we kinda like having C around!)  That being said, my grunt work has mostly been a combination of prior experience, knowledge and resources, the help of several key individuals, and well-timed and purposeful day trips with a laundry list of tasks.    To be honest I hadn’t spent much time at the North End in my pre-Cragbaby days, as my leading ability back then made the other areas a more logical choice.  But fast forward a couple of years, and I’m significantly stronger than I was back then, and ready to push myself on gear – and now that the falcon closure has been lifted, the North End is now a perfect playground for both my professional (guidebook) as well as personal (just plain fun)  enjoyment!

So on a remarkably cool and unseasonably crisp weekday last week, I met a couple of friends out at the North End.  Not surprisingly, we had the whole place to ourselves save a few random bird sounds off in the distance that we were all certain came from pterodactyls (it sounded like it anyway).  Here’s how the day went down… 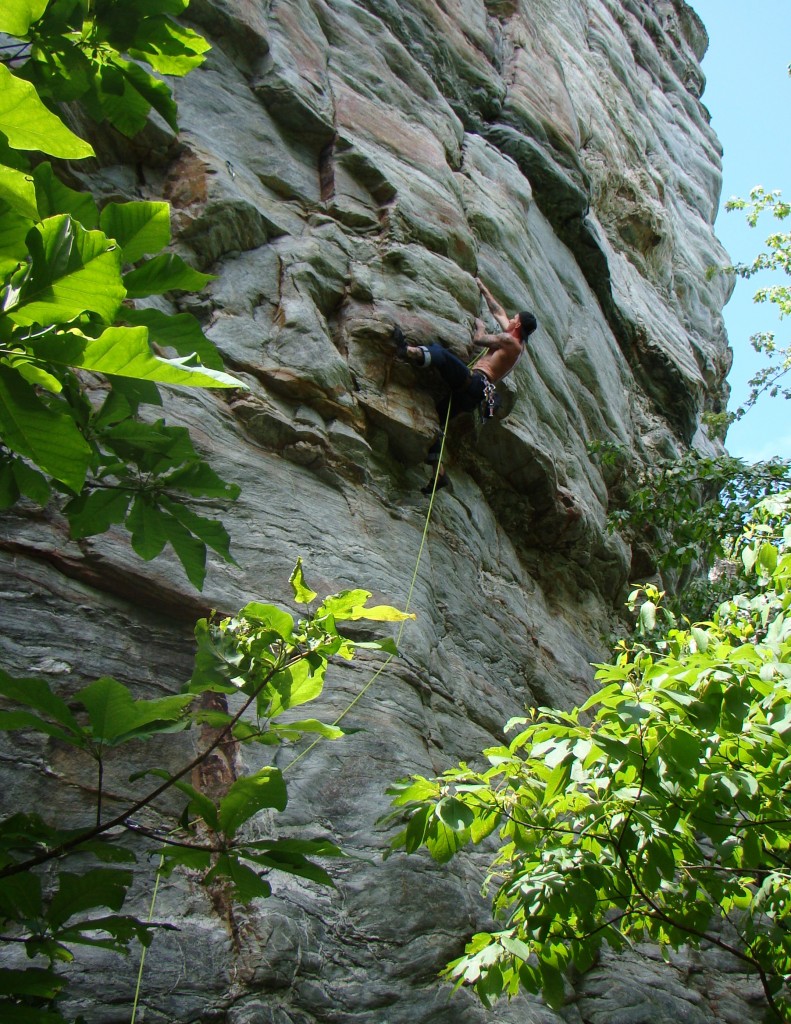 Shadowdance (5.10c) – I had been on this once before, but this is the first time I had ever led it, and it was even more fun than I remembered it!  A technical dance up some aesthetic finger cracks, with great gear in all the right places.  A superb line – actually looking back on it, I could probably say that about all the routes we did, since they were all classics!
Boogie Til Ya Puke (5.12b) – My friend Rob is currently working on this and is frustratingly close – he’s down to a one-hang, each time with a high point one move farther than the last.  We all know how frustrating that feels…I cleaned the gear after one of his attempts.  This sucker is HARD.  Burly and sustained, with one hard move after another, culminating with a few long moves off of a redpoint crushing sloper before finishing on steep, but juggy terrain.  This route is definitely above my pay grade – I flailed through the business and finally pulled on a draw.
Vascular Disaster  (5.11c) – I cleaned this one.  I’d heard horror stories about how hard the start was for short folk, but it actually felt a lot easier than what I had steeled myself for (says the person on a toprope…:) )  A few campus-esque pulls but pretty straightforward.  There was a good rest stance right after the initial low roof, but the remainder of the climb was steep, sustained pulling on great holds (with a rather committing section in the middle for the leader).  My forearms were on fire up towards the top, but I managed to eek through clean.  Another time or two to up my confidence at the start and I think I’d be ready to lead it.  I was ready to call this my favorite line of the day, but then Rob talked me into putting my try hard pants on and tackling one more… 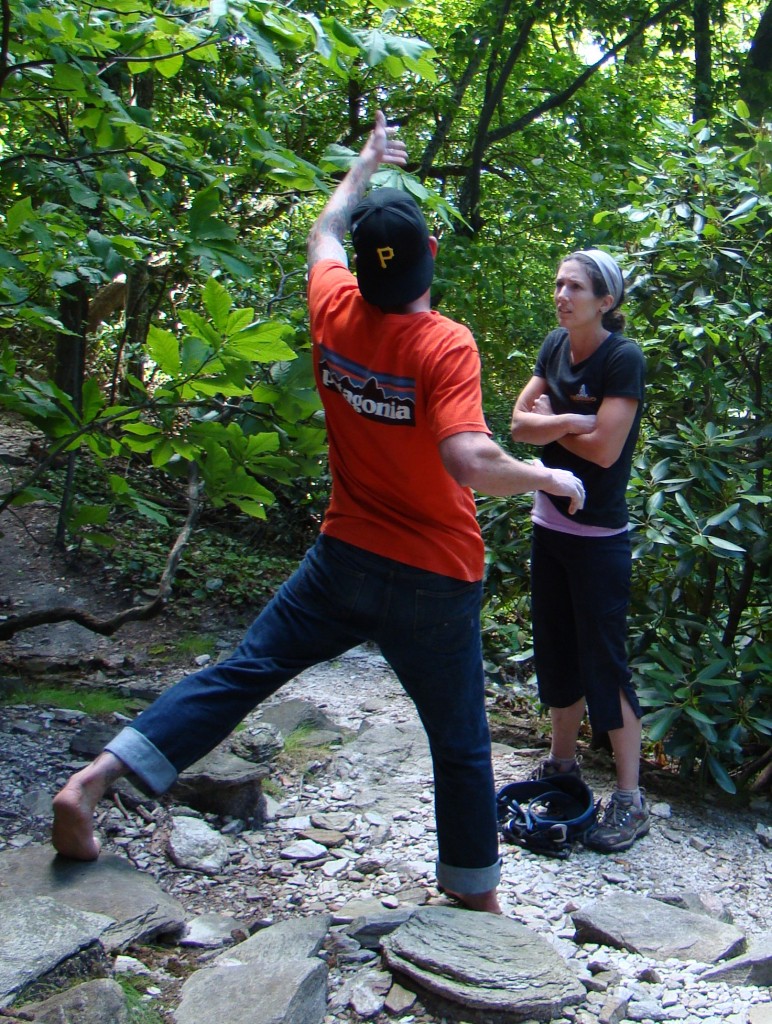 This is Rob trying to convince me to lead Mighty Mouse…or perhaps it’s his “So You Think You Can Dance” audition. Can’t remember which, it’s one of the two.

Mighty Mouse (5.11c/d) – So this is by far the hardest gear line I’ve ever tackled on the sharp end.  I can’t believe I got talked into leading it without at least following it first, but Rob gave me an offer I couldn’t refuse – a complete spray down of all the gear beta, including the order each piece needed to be racked on my harness, as well as a free pass to bail at any point if I wasn’t feeling up to it, since he was wanting to get on it anyway.  I knew the line would probably never be gift-wrapped quite so neatly for me again, so considering this route also has a reputation for being the most well-protected line at the grade at Moore’s, I figured what better way to break into 5.11 trad? (which after all was one of my goals on my 2012 Hit List).  I’m not gonna lie, I felt pretty nervous.  Pushing limits on bolts is a no brainer –  all you have to do is put the rope in a (more than likely already hanging) quickdraw. whereas on gear you actually have to do stuff besides climb…and it’s pretty important stuff too, like thinking about how to keep yourself off the deck.  The ironic thing however is that Mighty Mouse is actually better protected than a lot of sport routes…

Anyway, Mighty Mouse once upon a time was 5.11b, but over the years a few holds have broken off in the crux, slowly but surely pushing the grade up to the .11+ range.  The first section was a funky little chimney to an interesting seat aptly perched right below the long and sequency crux.  A quick traverse led to another crack, this one much easier.  I was delighted to find that I didn’t have too much trouble deciphering or making the moves, rather I found the real strenuous part to be placing the gear – I was definitely redlining in a few spots. I was clean in the first section, hung on my pieces through the crux, and then finished up the second crack clean.  A serious redpoint attempt is going to take a lot of beta refining to be able to move smoothly and efficiently through the pumpy bits, but I’m definitely psyched to get back and work on it soon!

All in all, stellar day!  I was able to get on several of the North End classics as well as confirm a bunch of other descriptions for the guidebook.  What I’m most excited about however, is that I’m realizing that the North End can easily be thrown into the summer/fall day trip rotation for our family.  Unlike the majority of routes at Moore’s, many of the lines at the North End descend from a fixed anchor at the top of the climb, so the leader can belay from the ground, which is obviously a necessity with C around.  In fact, the base of the cliff is for the most part flat and sandy, with plenty of rocks to scramble around on – perfect for an active, exploring toddler.  The only downside is the approach, which is fairly long when you add a 30 pound cragbaby to your back in addition to all the climbing gear.  But the good news is that, though a bit steep in sections, the hike is not technical or exposed, which means a motivated C will be psyched to walk on his own for at least part of the way.  So North End, here we come!