So after spending the past two (unseasonably mild) weekends catching up around the house and enjoying time with family, the heat was back in full force this weekend.  Our original plan was for the New River Gorge, but with temps hovering at 100 and humidity almost as high, no one was psyched on sleeping in a tent in a pool of sweat.  We instead opted for a day trip to a shady little crag off the beaten path in the western part of the state – Little Wilson.  This was actually our first time going there.  We actually attempted to go there once several years ago, but got lost and gave up pretty quickly.  Thanks to Mike Grimm from Misty Mountain, there’s now a nifty little guide called the High Country Cragger that documents this area.

It’s a solid 20-30 minute hike that weaves over and under a massive sea of roots and rhododendron tunnels – the way in is entirely downhill, and pretty steep in some sections.  This of course means that the tail end of the day ends up being quite the grunt-fest.  By now the trail is pretty worn down, but I can’t imagine how the first ascensionists ever found this place!   This cliffline is short and faces to the west, and there is a picturesque mountain stream that flows parallel to the base of the cliff.  The shade from the trees and sun aspect of the cliff coupled with the refreshing breezes coming off the water made this place the perfect haven to escape the suffocating 106 degree heat waiting for us back home.  The rock itself is pretty interesting looking – blocky and angular in shape, with lots of sharp features and deeply incut edges – and pretty steep!  For such a small area, there’s a pretty wide range of grades (5.8 – 5.12+), so it’s a good option for groups with varying skill levels. The stream widens into a little wading pool at one point, so three guesses as to where Cragbaby spent his entire day! 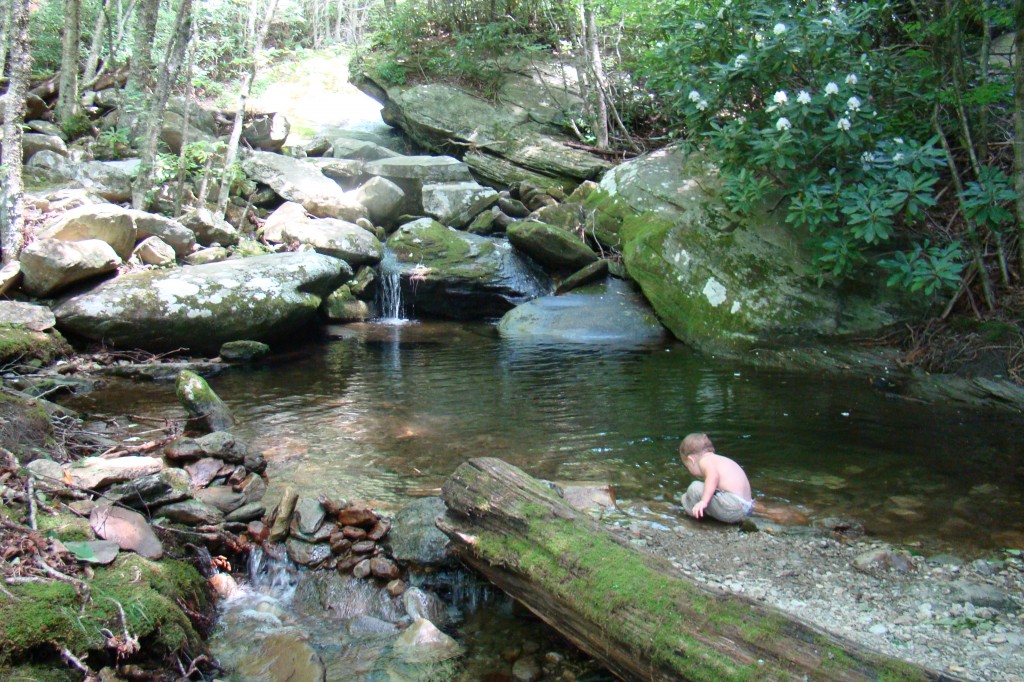 Cragbaby with an endless array of rocks to throw (and a 10 pound sopping wet diaper!)

Climb With a View (5.10b):  Nice introduction the the area.  The right  combination of pumpy and technical to keep things interesting!
Tiny Gun (5.11a):  Easy climbing to a chain that was pretty reachy to hang the draw on.  The first time up I missed the hidden crimp rail until I was right on top of it, and by then I was so fried from fiddling with the chain clip that I couldn’t make the move.  Pulled the rope and sent next go.
Code 3 (5.11a):  Definitely the best route on the wall.  No well-defined crux, just a sustained pump factor to manage throughout.  Very cool and exposed finish!
First Encounter (5.10d):  This line takes the prize of most unique route of the day, and for that reason, was probably my favorite.  It followed a left-angling flake/ramp to a funky, technical crux, and finished by pulling a surprisingly hard-to-read roof that was mighty darn hot in the sun.

All in all it was a nice, low-key kinda day.  Towards the end of the day I hopped on a couple of .12’s (Fire Ants and Aqualung), but realized pretty quickly that the heat had drained any semblance of motivation that I had to do any hard moves, so my efforts were rather lackluster.  It was great to explore a new crag though, especially one so close to home, although the burly hike and relatively small amount of climbs Little Wilson has to offer will probably keep it from earning a spot as a “regular” on the crag rotations.  A couple hours later and a few thousand feet lower, we were back underneath the smothering blanket known as summer in the Piedmont, counting down the days til we can gain some altitude out west at the end of July!