So let’s say hypothetically that your favorite climbing partner’s birthday was coming up, and you were looking for the perfect gift to give to the person that holds your life in their hands week after week.  You could probably be successful with the token REI gift card or treat them to a post-climbing feast – climbers generally aren’t that hard to please.  But if you wanted to be a little more efficient in your gift-giving, you would do well to consider the TRANGO Cinch, as odds are it’ll make you both happy. 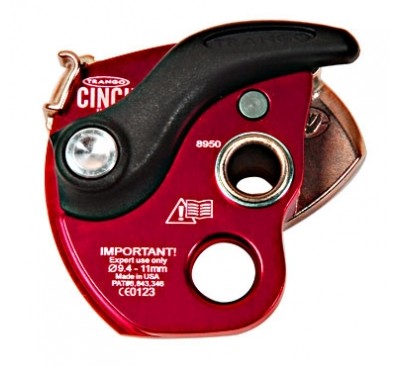 – Feeds like a dream.
– Compact and lightweight.
– Fits a wide range of rope sizes.
– Choice of 4 sexy colors

– Cheaper than the Grigri.
– It’s easy to feed out as much rope as needed while still keeping the brake hand on.
– Repeated use won’t make obnoxious twists and kinks in your rope.

When lead-belaying, the Cinch feeds out so smoothly that the first few times I used it, I had to triple and quadruple-check to make sure it was set up correctly.  There’s no herky-jerkies, just a steady pay out of rope as fast as I need it.  It’s small and weighs 20% less than the Grigri, so I don’t even mind when I accidentally take it up with me when its my turn to climb.  It seems like ropes are getting skinnier and skinnier these days, so it’s great that Trango has found an innovative design that can accommodate the smaller cords.  One of the best parts, however, is that after a long day on the rock, I can neatly flake my rope back into the pack without any of those annoying kinks and twists as with other auto-locking devices.

I’ve heard a lot of people say that a major drawback to the Cinch is when the climber is working out the moves on a route, and therefore weighting and unweighting the rope in quick succession.  And initially I agreed.  I found that when my climber said, “Okay, on me,” it sometimes took me a couple of extra seconds to “release” them.  As it turns out I just needed to change my hand position slightly.  Now that I’ve gotten accustomed to the Cinch, I don’t think a hangdog situation is any harder to manage with a Cinch than with a GriGri – it’s just different, and there’s a slight learning curve that most intelligent individuals can figure out pretty quickly.

I haven’t tried the Cinch in a multi-pitch situation yet, mostly because with a toddler on the ground, those opportunities don’t present themselves that often, but I do know several folks that are big Cinch fans even for big walls.  As with a Grigri, you can only thread one strand through the device at a time, so unless you’re simul-rapping, you still have to carry an ATC – so I guess the biggest factor to consider in that situation is how much gear you want to carry up with you.

My Stance on Trad

It is true that any auto-locking device will put more force on your gear and give a “harder” catch, and for that reason many swear only by an ATC when it comes to trad climbing.  But for me personally, as a small woman that is outweighed by all my climbing partners, and by my husband even twice as much, almost all of my catches take me off the ground, leaving me no choice but to provide a soft catch.  So long as the rock quality is good and the gear is not ridiculously small (and thereby not rated at full strength in a fall), I think having an assisted brake for when I get launched sky high catching a whipper is more valuable than the slight amount of force shaved off with a non-auto-locking device.  Less impact on good gear is a moot point if the belayer gets slammed into the wall and loses their brake hand.

In the interest of full disclosure I received my Cinch free of charge, but that didn’t affect this review in the least.  I had plenty of belay devices already and certainly didn’t “need” another.  I wholeheartedly believe that the Cinch is an excellent choice for all types of climbing, and in my opinion, is the best auto-locking device on the market right now.  Not only does it perform better than its competition, but its lighter AND cheaper – so to me the choice is obvious!   As another disclaimer, the Cinch (or any other belay device for that matter) will never replace an attentive and experienced belayer – just because the word “auto” is in there doesn’t mean your belayer can shift to auto-pilot, so choose both your belay device AND belayer wisely!  Who else loves (or hates) a Cinch?  Feel free to put in your two cents!