I’ve probably said it before, but one of the best parts about climbing is the people who do it – they tend to be pretty fun to hang out with.  Thankfully our local climbing gym, Inner Peaks (IP for the cool folk…), figured this out a while ago, as evidenced in the member parties they have several times per year.  Even though our family has only been in Charlotte for a little over a year, we’ve had a chance to check out the party scene at IP more than a few times, and we’ve never come away disappointed.  This one was no exception – and this time around me and Cragbaby got to try out our new roles as Trango booth babes.  🙂

I’d been wanting to do a booth at one of these shindigs for a while, and considering that IP just put the finishing touches on their new “Trad Wall” last week, this weekend made for the perfect opportunity.  What’s a Trad Wall, you might ask?  Well, it’s a nifty little unit filled with rocks that are carefully arranged in such a way to make cracks and openings of varying sizes. In other words, picture a stone wall without any of the grout.  It’s a great tool for practicing gear placements, and will be the centerpiece of numerous introductory trad climbing classes at the gym this fall. 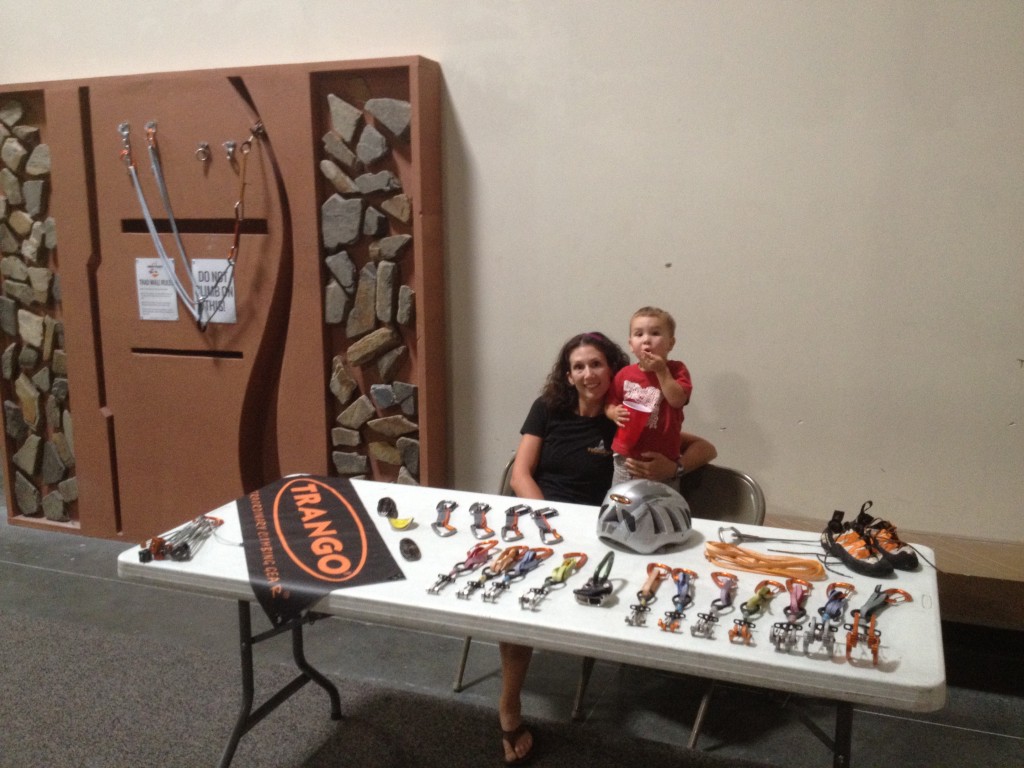 Cragbaby sampling the food while we wait for the party to get started!

But for Trango’s purposes, it was a perfect backdrop for the booth, since passersby could actually do something more with the gear besides just talking and pulling on cam triggers over and over.  And judging by all the gear talk going on at the booth, I think the evening was a success!  I’d say that the majority of my booth visitors were newer climbers, many just starting to accumulate a rack – making it a great time to introduce some Trango products that they might not be familiar with.  I also got a handful of experienced traddies as well as some gym rats – all of whom had fun fiddling with Trango gear on the Trad Wall!  Although I’m sure I had at least one conversation involving every piece of gear that I had brought, there were a few talking points that stole the show over and over and had me feeling like a broken record by the end of the night…

SPLITTER CAMS – The stability of a 4-cam unit with the ability to squeeze into tighter spaces like a 3-cam unit?  Even experienced traddies were impressed with the innovation here.  Intrigued?  Review coming soon!

EXTENDABLE SLINGS – Even newbie gym rats could see the advantage of not having to drag up a bunch of extra slings with you.

ALPINE EQUALIZER – 99% of the folks passing through my booth had never even heard of this piece of equipment before, so it got a lot of action dangling from the chains on the Trad Wall.  The consensus can be summed up from what one particular climber said to me after testing it out – “Gimmicky?  Yes…but I sure wish I’d thought of it…”

SMOOTH QUICKDRAWS – Newbs were impressed with their sex appeal, experienced sport monkeys favborably compared them to the Petzl Spirits – an all around score for Trango!  (It’s also no secret how much I love clipping into these babies – here’s my review…)

HOW DO I GET SPONSORED AND GET FREE GEAR?  Ironically enough, it seemed that 1 out of every 4 people that approached my booth had this burning question on their mind.  I shared a few ideas, but considering that all of them were males under the age of 18, I’m not sure how much they can really glean from my strategy…
1.  Get Knocked Up, Keep Climbing.
2.  Give Birth, Keep Climbing.
3.  Raise Toddler, Keep Climbing.
4.  Blog about all of the above. 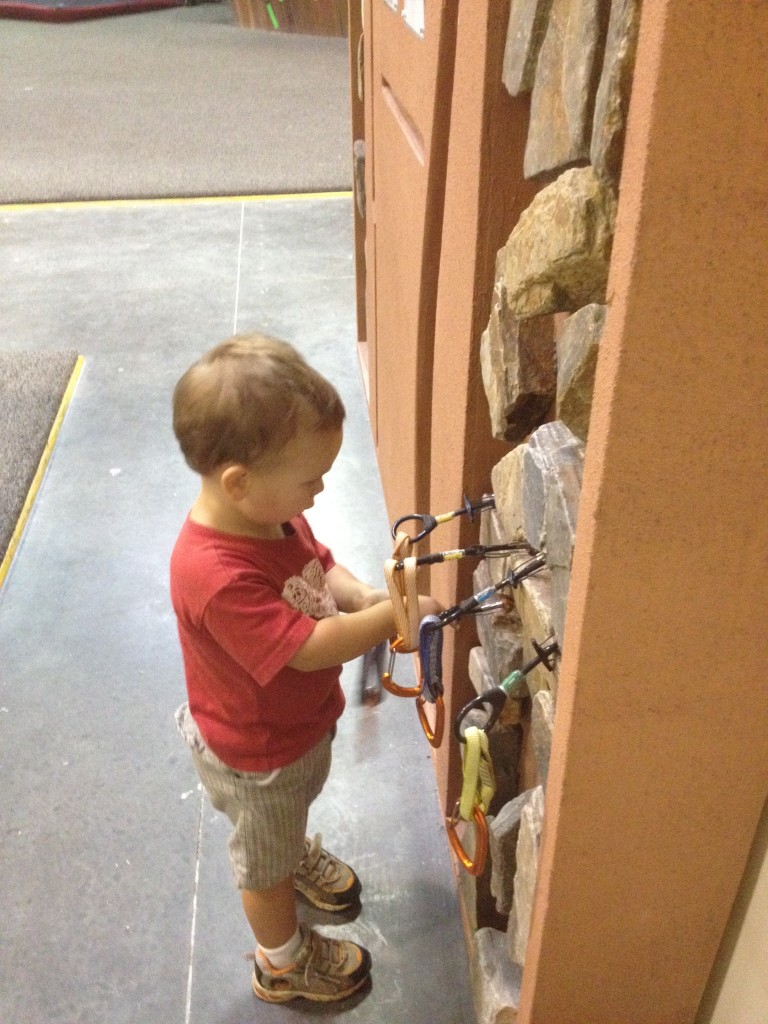 Not sure I’d want to fall on ANY of his placements, but he’s got the right idea at least 🙂

All in all, I’d say I represented for Team Trango pretty well in my booth…but unfortunately I can’t say the same about my performance in the Cornhole tournament.  Despite the addition of cornhole boards to several recent family events, my meager skills were no match for the tail-gating frat boys we got pitted against in the second round.  Oh well.  I better stick to climbing, but I suppose there’s still a shot for Cragbaby to become the resident cornhole expert yet – his exuberant shouts of “CORN!!!!” could be heard reverberating across the gym.  Thankfully the other teams were all good sports didn’t mind our team having an “assistant” on the playing field, despite his tendencies towards the occasional snatch and grab.

This is probably all you’ll here from me over the next 2 weeks – in a couple of days our family is taking a long-awaited trip to one of the few areas of the country that still has good sending temps – Tensleep Canyon, WY!  We’ll also be hitting Spearfish Canyon, Devil’s Tower, and the Black Hills while we’re out there.  While I won’t be blogging at all while I’m gone, I will be keeping my Twitter and Facebook pages updated, so feel free to check those out.  Oh yeah, and be ready for an onslaught of pictures and trip reports when I get back in August!

1 Response to “Trango in da House – and on the Trad Wall!”