After 2 days of  crankin’ in Spearfish Canyon, our crew was ready for something a little more low-key.  The only must-do on our agenda was to make our way 3 hours west to Ten Sleep, Wyoming, but nobody said a rest day had to be boring…We had found out from some locals about a surreal swimming hole along Sunshine Creek in Spearfish Canyon, which seemed like a great way to pass by the morning.  It was about a 2 mile hike round trip, along a well-worn trail that was mostly flat and often meandered back and forth across the creek.  But while this hike was just a casual, enjoyable stroll for the grown-ups, it was anything but relaxing for Cragbaby.  His short little legs hiked for much of the way there, and for ALL of the way back, despite acquiring his first bee sting just as we were gearing up to hike out. (He handled it as any man should – 15 seconds of crying and then back to the business of hiking.)  Needless to say, it took about 30 seconds for C to fall asleep in the car after lunch as we made our way to our afternoon pit stop, Devil’s Tower.

Originally I had really hoped we’d be able to climb on the Tower.  Not only does this giant stand tall and proud as the most dramatic feature for miles and miles, an ascent of the Tower is a prized possession, almost a rite of passage for today’s climbers.  But unfortunately, we can’t do it all.  No matter how we crunched the numbers, the logistics just didn’t work out.  Obviously the biggest logistical dilemma was what to do with Cragbaby…but if that was the only issue we probably could have done some juggling with our friends to make it work.  The other issue was that we had an hour and a half drive to get there, which made the early start we needed to beat the heat impossible.  Not to mention it was supposed to be a rest day. Had we pushed ourselves to summit, I’m sure we would not have had nearly as much success the next few days in Ten Sleep, so it was definitely the right decision to stay on the ground. 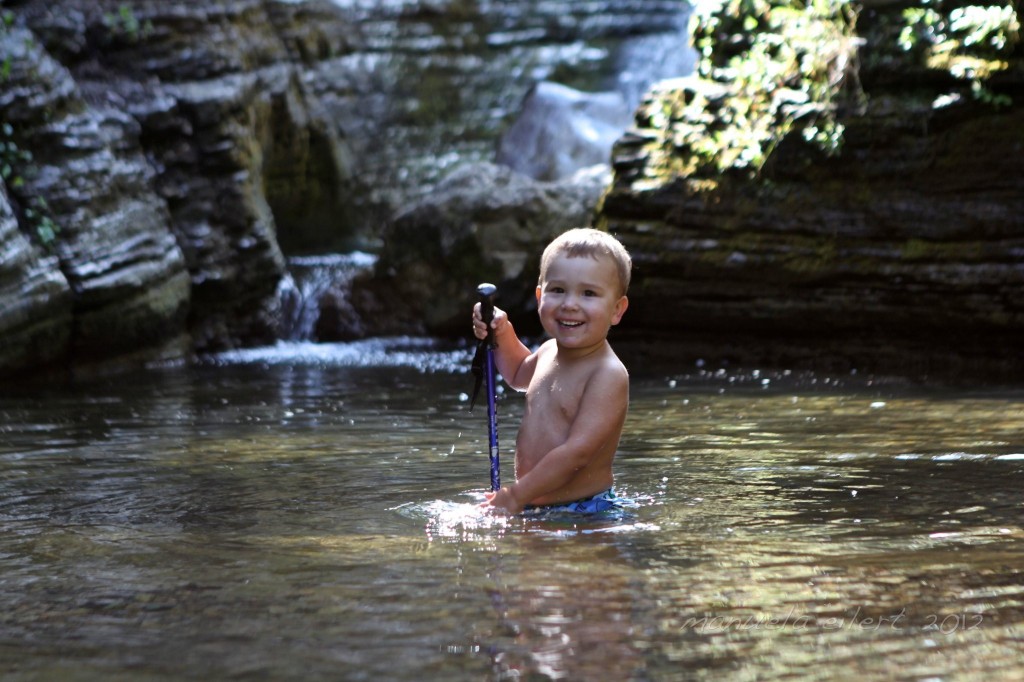 Cragbaby on the other hand, wasn’t so sure.  As we walked the 1.3 mile paved path around the base of the Tower, he seemed very confused.  He kept looking and pointing up at columns and cracks, and saying, “Mommy climb that.”  It was as if he couldn’t figure out why we were just walking around.  But our day wasn’t without some climbing excitement.  About3/4’s of the way around, along the Durrance section, we heard a climbing party shouting to each other.  The leader was on a big ledge with a tree, and had somehow dropped his rope (?!?) and was exhibiting an array of dehydration symptoms from atop his perch.  We called up to them, confirmed the details of their situation, and picked up our pace as we headed to the ranger’s station to report the incident.  However, before the rangers could even make it to the base, help was on the way from another group of climbers as well, which as a side note, to me speaks a lot of the selfless generosity that the climbing community so often displays. 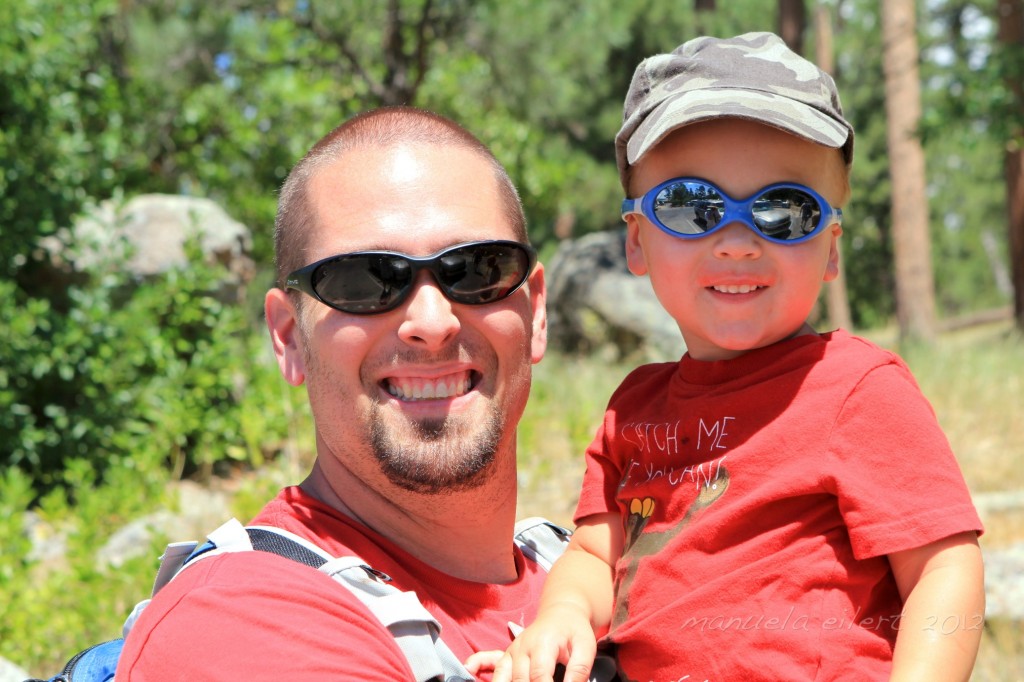 But perhaps the cutest part of our day was on the drive out of the park, when we stopped at the roadside “prairie dog towns.”  There were literally hundreds of these inquisitive little guys scurrying around from one hole to the next.  C had never seen anything like that before, and was quite taken with the prairie dogs.  His enthusiasm scored him his own stuffed prairie dog, as well as his very own disposable  camera (who knew they even made those anymore?) from the trading post just outside the park.  This was unknowingly a brilliant move on our part, as prairie dog made for a surprisingly good road trip companion for C.  His entire 3 hour drive into Ten Sleep was spent taking pictures of us, and pointing out interesting sights for his prairie dog to see – bulldozers, school buses, trees… 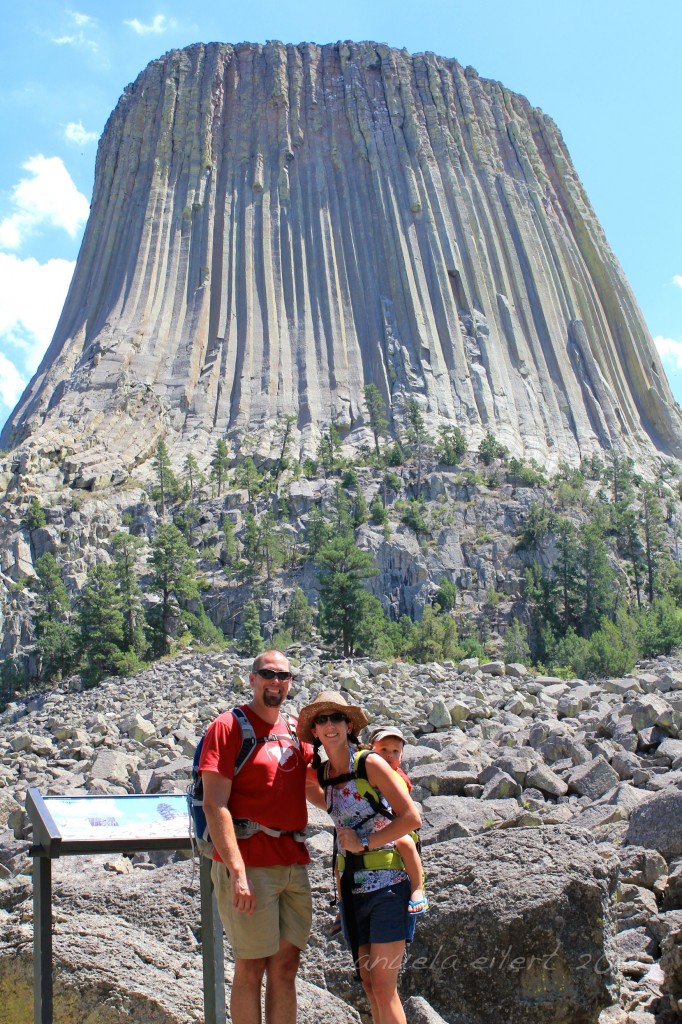 Meanwhile the grown-ups of both cars were kept awake during the monotonous terrain by scouring for gas stations in the 50+ mile stretch into Buffalo, WY (for the record, there is none…)  The last 5 “exits” we passed before reaching town were actually onto dirt roads that seemingly led into oblivion, and we evidently rolled into Buffalo on nothing but fumes, as we filled up 20.75 out of the 21 gallon tank.  A quarter of a gallon left on an 18 mpg tank – you do the math, there wasn’t much to spare…But after a quick dinner and grocery stop, the last hour of driving into Ten Sleep was uneventful, save the spectacular views as we climbed up to 9000 feet into the canyon and worked our way back down on the other side. 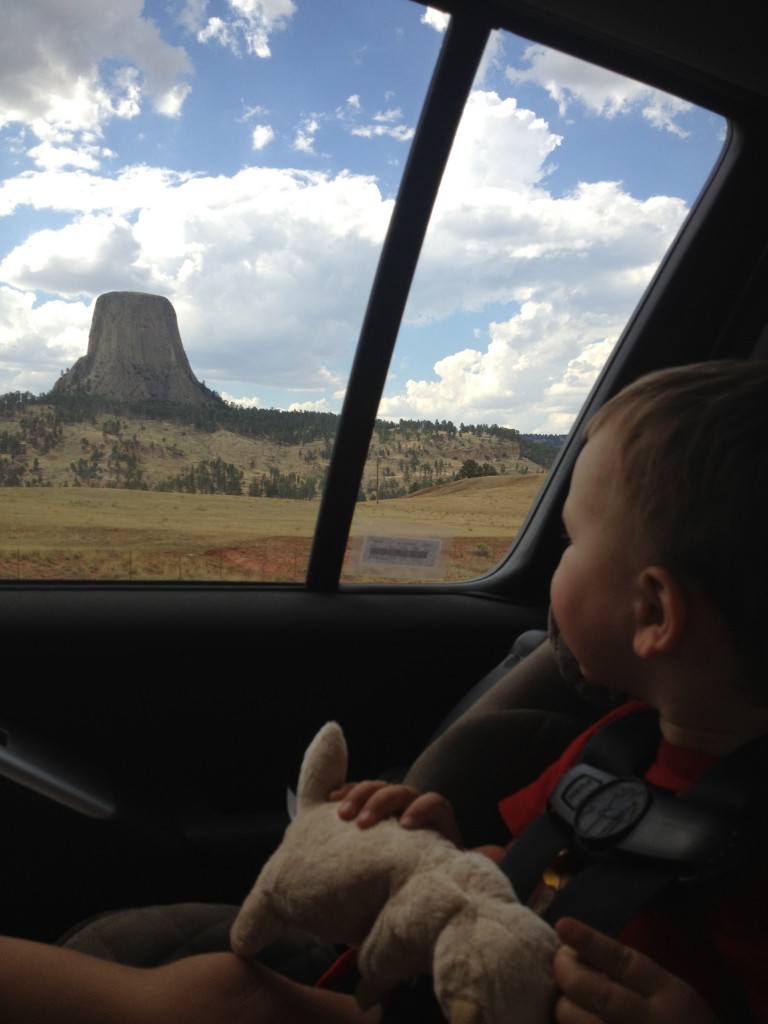 It was a good thing we’d stopped for groceries in Buffalo, as there was NOT A GROCERY STORE in Ten Sleep.  The entire population of Ten Sleep (all 260 of them) has to drive 30 minutes west to the town of Worland for apparently anything other than gas, beer, and shaved ice.  Our lodging however, the little guest house at the Ten Sleep Motel, was fantastic.  The double wide trailer may not have looked like much on the outside, but on the inside it was a 3 bedroom cabin with a nice kitchen and large living area.  I know I for one had a hard time falling asleep Monday night, as my mind was racing with excitement from the sneak preview we’d gotten of the canyon on the way in…Ten Sleep Canyon report tomorrow!