My affair with Ten Sleep Canyon sure was great while it lasted, but like so many good things, it had to  come to an end.  Lucky for me I had the world-class climbing of the New River Gorge to come back to.  And this weekend was not just any old weekend at the New – one of our partners in climb just moved up there a couple of weeks ago, and our crew descended upon his new digs in full force. 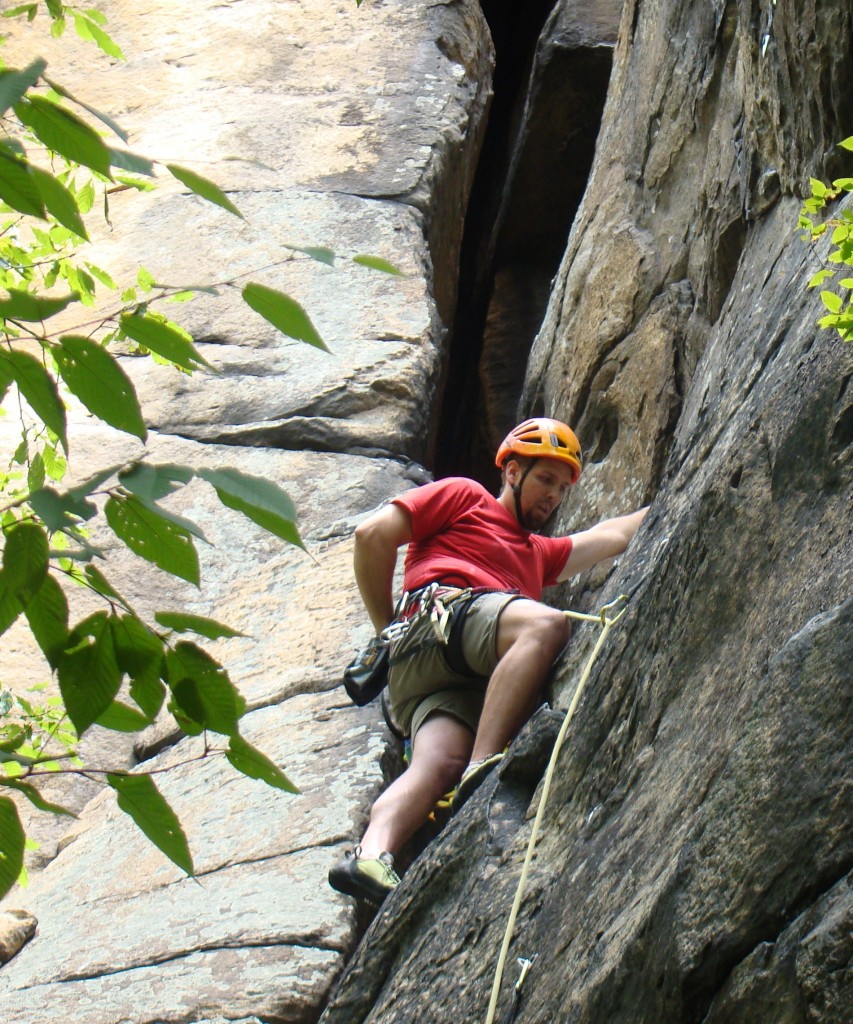 Crag-daddoo taking a breather after the lower business on Homer Erectus.

Day 1:  Endless Wall
Ordinarily Endless Wall would not be what I would consider a “go-to” area for summer, as the much of the wall sees all day sun.  But low humidity, temps in the 70’s, and carefully planned route choices kept us with a cool breeze and out of the blazing sun all day.  We were pleasantly surprised that conditions felt more like October than August!  Here’s a recap…

Strike a Scowl (5.10b): Hadn’t been on this one in years – Steve and I both thought it was a lot harder than we’d remembered it, but in hindsight we realized that the last time we were on it we wandered over to the arete rather than staying direct.
Fine Motor Control (5.12a):  The first 15 feet were crazy hard, then the rest was thin and technical.  After I worked out the start I felt like a send was within reach, but the layer of dirt on every hold in the upper section combined with the VERY generously spaced bolts made it less appealing than other routes in the area.
Homer Erectus Direct (5.12a):   I’d been on this line a couple of other times, but never taken the time to work it for the send,and it had been over a year since the last time i’d been on it.  It took me a while to remember my beta for the reachy .11 crux down low as well as the direct .12a crux up high.  I rehearsed the moves on lower and then sent next go.
Hellbound for Glory (5.12a):  From the ground, this is probably one of the most intimidating lines that I’ve seen at the New at this grade.  It starts with a couple of traverses – the first one not so bad, the second one uncomfortably compact.  Then you can pull onto the face and traverse (again) out along the face.  This is where the business begins.  The next 25 feet or so are pretty relentless – big moves to decent holds (if you can find them right away) on fairly steep terrain.  After a great rest, the line trends up and right – the angle gets lower, but the holds get thinner.  Oh yeah and the bolts are far apart – pretty big whipper potential in more than one section, but I think all the falls would be clean.  I took advantage of the toprope that was already in place, as I was prepared to thrash my way up it.  I definitely had to hang a few times, but all in all, I was really happy with how well I did on it.  I’d love to get back and work it on lead soon. 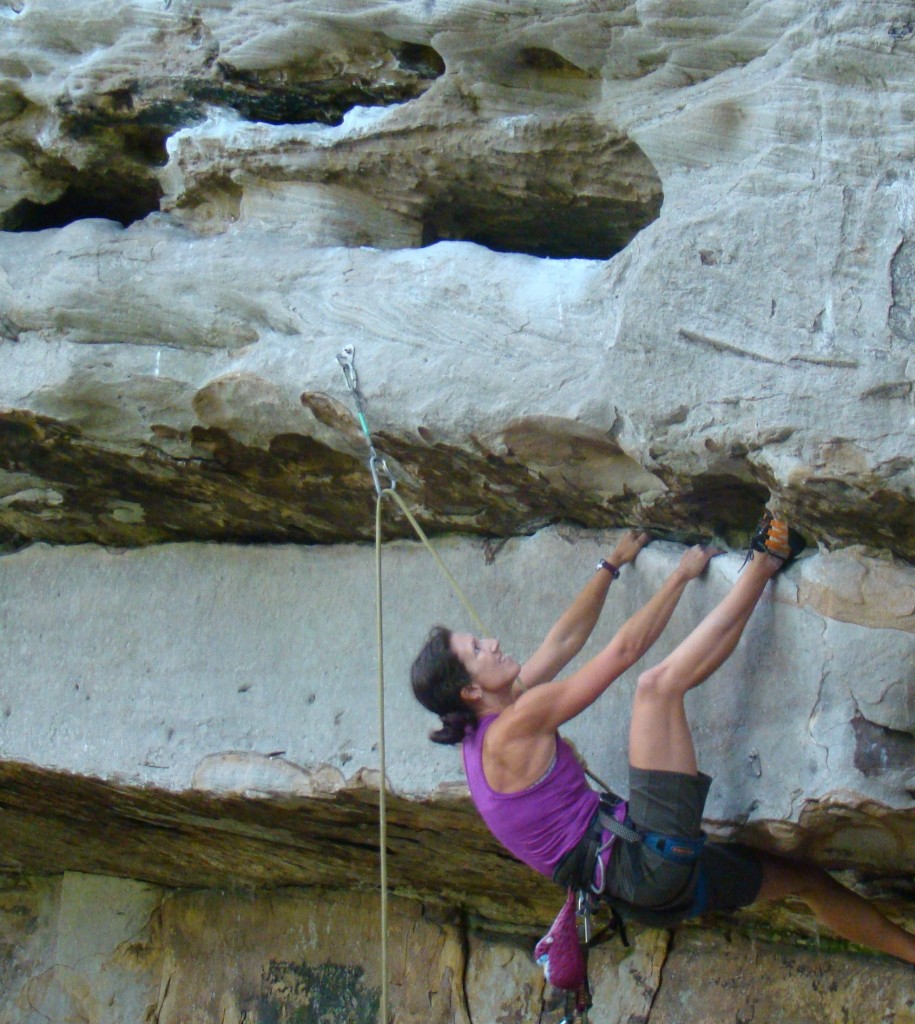 Do not try this at home…the beta pictured in this photo was horribly unsuccessful.

Day 2:  Cottontop
Steve and I had tried Cottontop once before a couple of years ago, but everything had been sopping wet so we didn’t get much climbing in.  But Sunday was a different story – with darn near perfect conditions!  The hike is definitely a death march, but pretty short-lived…I think I clocked in at 7 minutes, and that was at a decidedly lazy pace.

Cottonmouth (5.10a):  The classic warm-up, and deservedly so.  Jug to jug on a gently overhanging face.
Q-tip (5.11b):  Really fun face climbing with a couple of deceptively thin sequences.  Onsighting this as well as the .10a was fun, as it seems our m.o. of late at the New has been getting on either routes I’ve been on before, or routes I know I’ll need to work more than once to send.
Psychowrangler (5.12a):  Geez I hardly got far enough on this one to even write it down.  Holy big moves batman, this one shut me down completely.  Just when I thought I was starting to get better at steep stuff.  Back to the lead cave for me.
Cottonhead (5.10d):  This felt insanely hard and committing for the grade, but the moves were superfun.  A couple of long moves down low set you up for a juggy boulder problem up high. 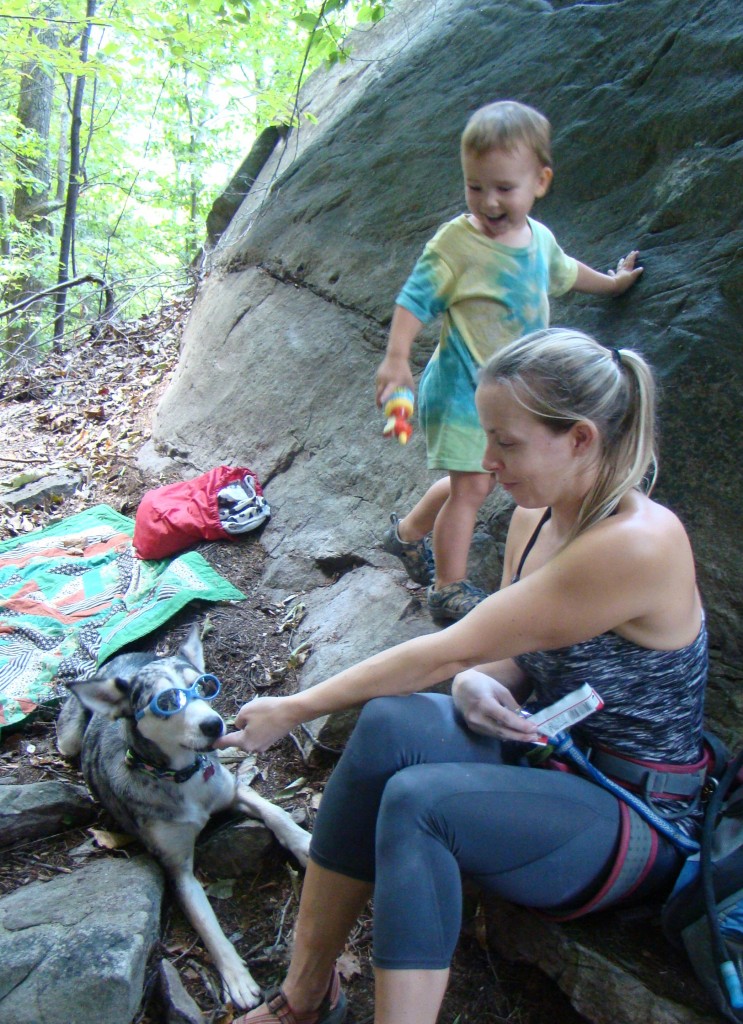 From one cool dude(tte) to another – Cragbaby and Luna took turns swapping shades.

I left the weekend with mixed feelings about my performance.  On the one hand, I nabbed another 5.12, which puts me at 9 so far on the year (which is right on track for my goal of twelve .12’s in 2012).  I got in a couple of onsights, and found a couple of routes that might be good short-term projects for the fall.  But on the other hand, I flailed miserably on Psychowrangler – just when I thought I was starting to get stronger on steep terrain…back to the lead cave for me I guess.  The good news is that (at the risk of sounding sappy), my favorite parts of climbing trips really have very little to do with how well I do (or don’t) climb.  For me the best part is the people I get to hang out with, and the good times I get to share with my family.  I wouldn’t trade any of those experiences for the world…well, except for the record-breaking code brown that was left (apparently by a giant cow when we weren’t looking) in Cragbaby’s diaper on Saturday.  That experience I probably would trade…but the others?  All keepers.  🙂

2 Responses to “Back to the New River Gorge”