Dear Ten Sleep Canyon,
Thanks for the amazing time.  Were it not for geography I would definitely make cheating on the New River Gorge a regular occurrence with you.  But the long-distance thing is gonna be hard, so we’re gonna have to settle for a rendezvous every year or two.
Love you long time,
Cragmama

Over the top?  Not really.  This place was that good – a summer sport climbing paradise I tell ya.  First of all, the canyon was ridiculously impressive, making Spearfish look like nothing more than a small trench in the foothills.  The approaches were long but rewarded us with spectacular vistas and a kid-friendly base (and,on a side note, most of the trails had a gradual enough incline that Cragbaby could successfully get his hike on).  And the climbing?  Absolutely amazing – enough rope-stretching, pocketed limestone routes on vertical to slightly overhanging terrain to last a lifetime.  Ok so if that’s not enough to make you put down your laptop and go buy a plane ticket, then read on…Here’s how our all-too-short 3 days in Ten Sleep went… 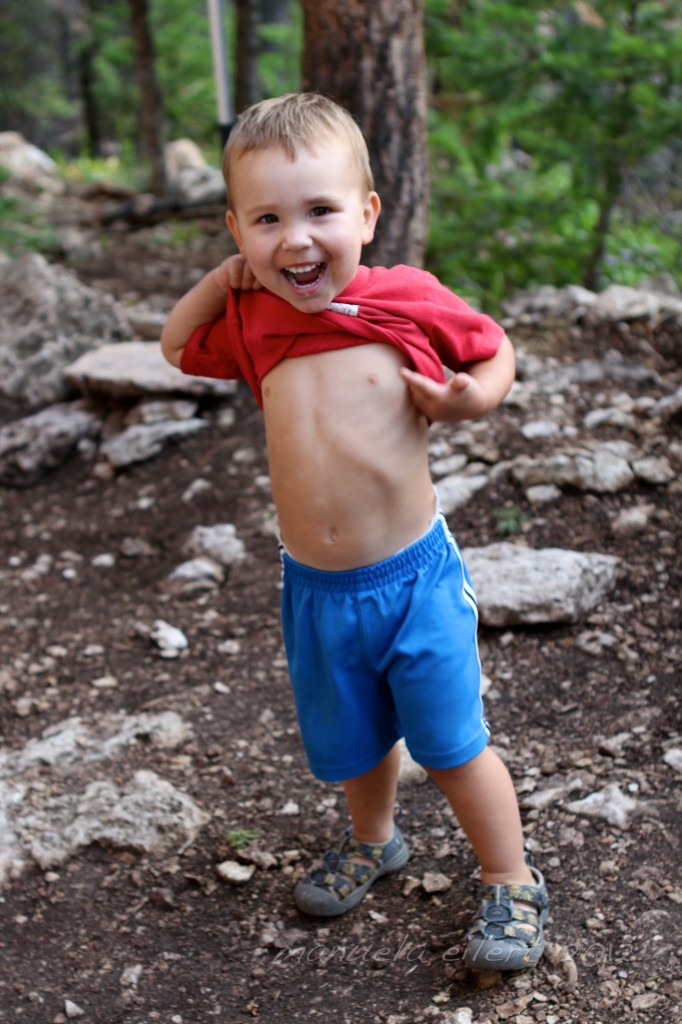 We found the rock as a whole to be a lot easier to read than Spearfish.  All the little pockets took some getting used to, but the movement was really fun, and the scenery was great.
Acid Mother Temple (5.10a) with Face Melter Roof Extension (5.11b/c):  80 feet of fun, face climbing + a steep bulge and more bolts that went on for another 60 feet = quite a pump, and quite an introduction to Ten Sleep Canyon.  Tricky crux up high that probably wouldn’t have been as hard had it occurred 100 feet lower.  Had to hang at the crux bolt on the extension.
Mr. Poopy Pants (5.11b):  Not sure I’ve been on anything better at the grade, certainly not anything more unique.   Vertical stemming led up to a bat guano-laden ledge, and a large bulge that was rather reminiscent of a giant butt – enter the butt crack up the middle, make a burly clip, and stem the cheeks to victory!
Some Boys Never Learn (5.11c):  A cool layback start led to intermediate anchors (which keeps the route at 5.10c).  But the full value finish pulled at a very steep bulge for another few bolts.  I’d like to blame my hangdog ascent on the spinning hanger and an angry colony of swallows just before the anchors, but my pump clock probably had more to do with it. 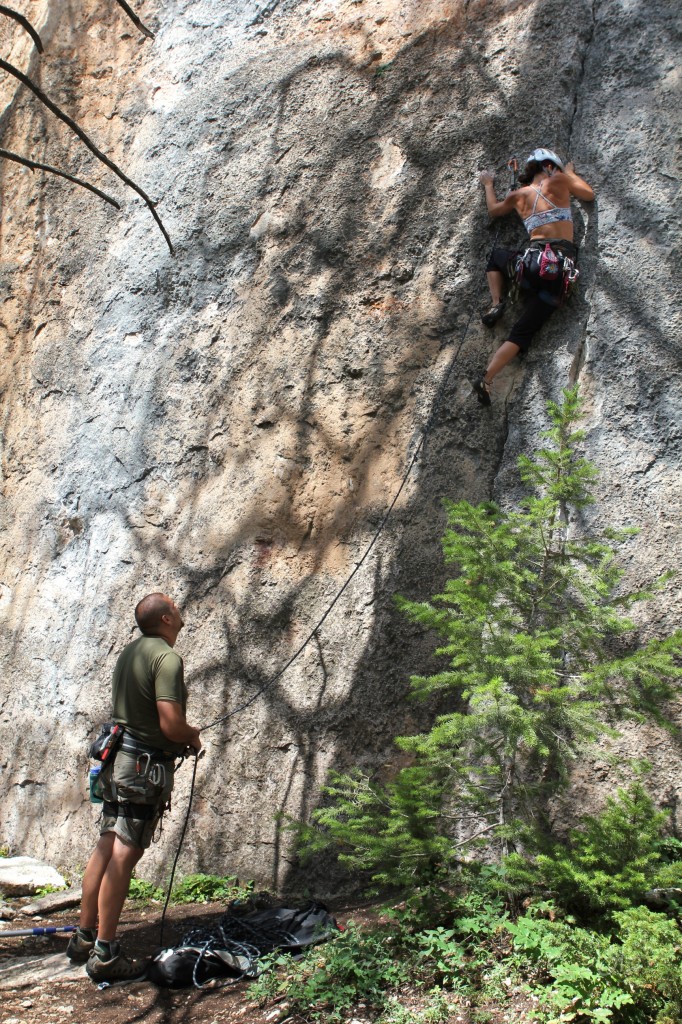 Day 2:  French Cattle Ranch
Touted as the premier climbing area in the canyon, it was an epic day for our crew that I could relive over and over again.  We got out early, and stayed late (although “late” with a hungry toddler is a little different than “late” for most…)  The Crag-Daddy got his first 5.12 send, and I got my first .12 onsight, as well as ticked off the last few sends I needed for ‘Round the Horn 10-12a!
Big Yellow Butterfly (5.11a):  Another one that had intermediate anchors providing a 5.10 bailout from the business high above.  Fantastic warm-up with a slightly awkward beginning, but big moves wading through a sea of jugs in the upper section.
Wu Tang’s Secret Shinto Ride (5.12a):  Woo-hoo!  If I could have written a play by play for a perfect route for me to onsight, this would have been it!  Thin, crimpy V4 section for the first 3 bolts, followed by terrain that eased up a couple of letter grades through each subsequent bolt, culminating with a 5.10- finish.  It was nice to be able to scout out the crux from the ground and get the hard stuff out of the way early.
Center El Shinto (5.12b):  As I said before, I usually don’t like to try stuff I don’t think I can onsight when I’m on longer trips, but this tall, imposing blue streak was beckoning…it also didn’t hurt that it already had draws up on it…Steve was still working on Wu-Tang’s but it was my turn to climb, so I figured I might as well try it.  Sustained, technical 5.11 climbing with a devious crux up high involving a scary clip, and a pumpy finish.  An undeniable classic.  I didn’t send it, but I surprised myself at how well I did, staying clean until I dropped off trying to finagle the right position to clip the crux bolt.  I had no trouble with any of the moves, so I think a redpoint would have come within a few more tries had I been willing to try again, but the rest of our crew was ready to move on to the Back Forty, and I had my ‘Round the Horn ticks to finish up. 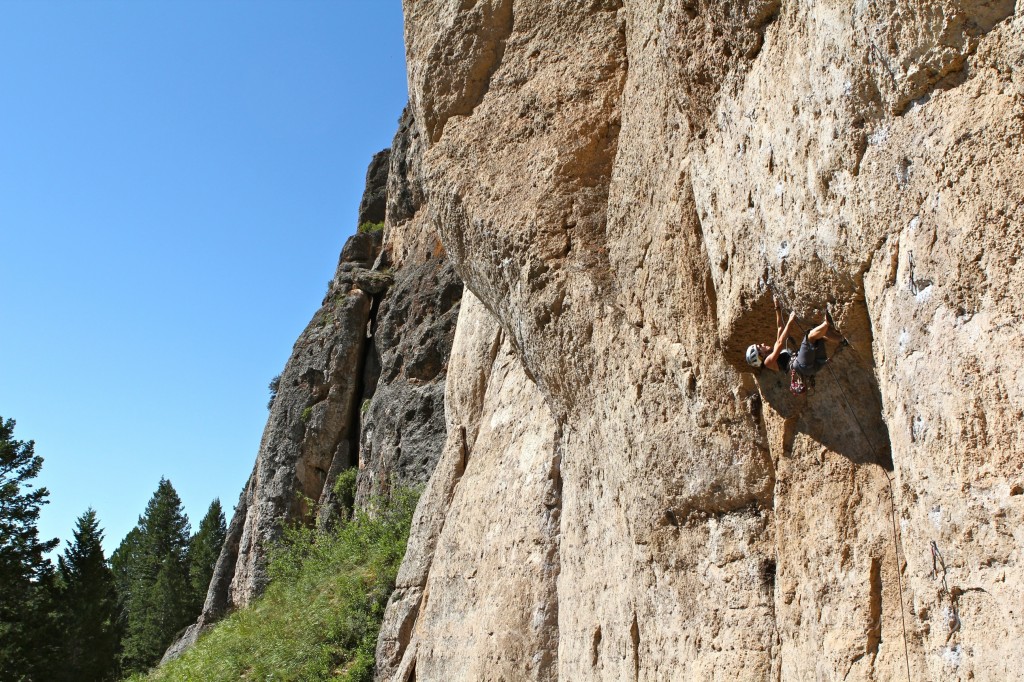 Slightly Toasted Cracker (5.11d):  No super hard moves at all, just a relentless array of kinda hard moves all strung together in a row for about 80 feet.  I had the onsight in the bag with one more move left to a nice shake-out jug 15 feet below the anchors, but my left hand was on a razor blade crimp and when I went to re-grip I peeled off.  Pulled the rope and sent next go.
Hell Yes, I Want Cheesy Poofs (5.11c):   To be honest the only reason I got on this one is because we were sitting right below it and I lacked a send at this grade for my ‘Round the Horn project.  It was given a lot of stars in the guidebook, but my efforts from earlier in the day were catching up with me and I didn’t think I could summon the strength needed to send it.  As I started up it I felt that “stale” pump in my forearms – you know, the kind that has been slowly accumulating over several days that makes every hold feel half the size that it really is…The middle section felt pretty desperate but I managed to make it to a good stance to recover (somewhat) before tackling the crux up high.  A cruel bulge with thin hands and smeary feet – but somehow I managed to keep it together and stay clean to the top. 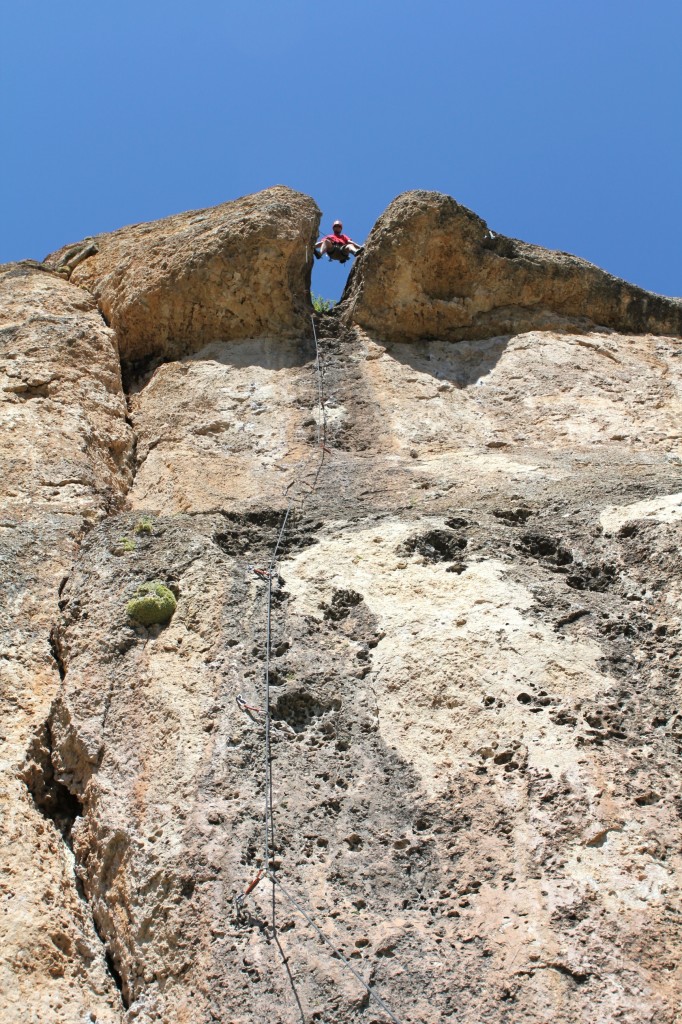 Day 3:  Mondo Beyondo
In hindsight, this probably should have been a rest day, as we were completely zonked from our exploits from the day before.  But we were running out of climb time, so the rock was calling…
Beer Bong (5.10b):  Wow, what a way to end our time in Ten Sleep.  This was a wild route for sure!  Opening section was nothing special 5.10 face climbing, but the last 20 feet were a chimney that had such a weird sequence of moves that by the time I clipped the chains, my back was to the rock and I was facing out towards the canyon.
Momma’s Mental Medication (5.12a):  Easy climbing to a few powerful, bouldery moves over a roof.  I blundered my way through this one and it wasn’t pretty.  Sometimes you just gotta know when to call it quits…

Good times and great sends were definitely had by all, especially on day 2.  I was proud of the whole crew for pushing through to new individual breakthroughs! After the slow start in Spearfish, I was psyched to tick all of my ‘Round the Horn 10a – 12a sends on only our 2nd day in Ten Sleep (4th day overall).  As a bonus, I realized that I actually had an onsight tick for every grade except 5.11d.  (I thought about trying for an .11d onsight at Mondo Beyondo on our last day in Ten Sleep, but I could tell right away that my body was going to rebel if I asked it to try hard.)  We ended up getting an early start on the drive back to South Dakota, and even managed to squeeze in a visit to Mt. Rushmore before sunset.  Stay tuned for the skinny on the summits and spires in the Needles!  Oh yeah, and for the Ten Sleep Picture Gallery, click here. 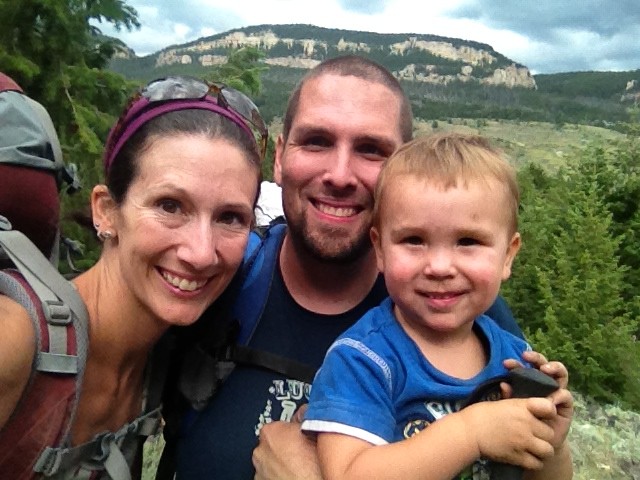 4 Responses to “An Affair With Ten Sleep Canyon”