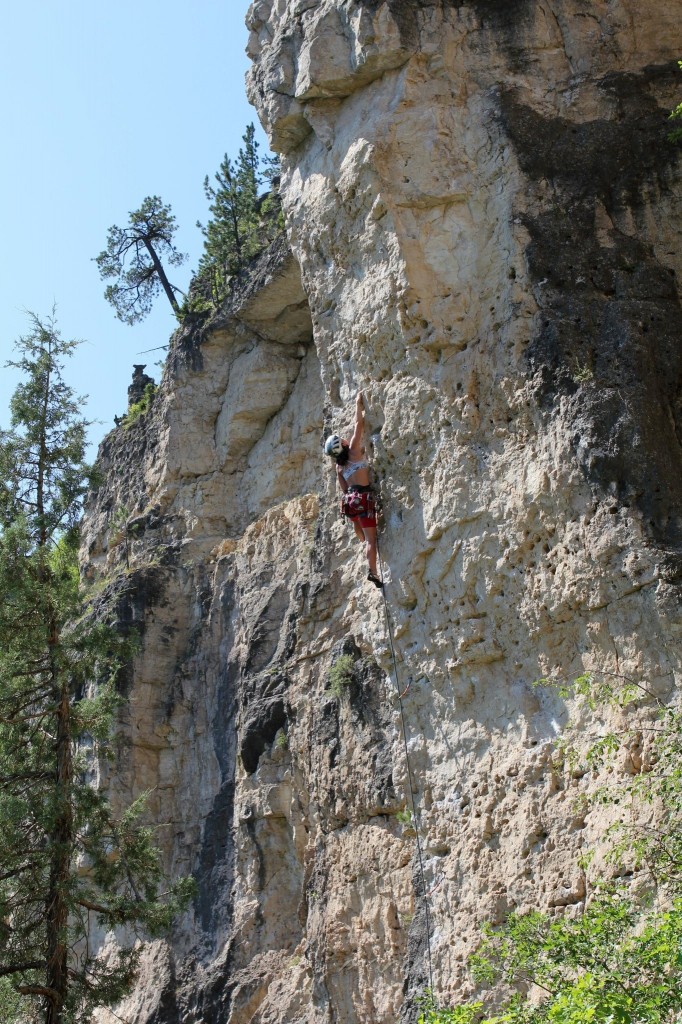 As most of you already know, our family just got back from a whirlwind climbing trip to South Dakota and Wyoming.  To say that the trip was a success would be an understatement – we had a fabulous time, and as I look outside at my droopy, hot backyard as I type this, my only regret is that we’d had more time to spend out there!  This trip was a far cry from our usual weekend excursions, and in a lot of ways, it was somewhat of a “luxury trip” (for us anyway…though it probably doesn’t fit most people’s definition of “luxurious.”)  For starters, we opted to fly rather than drive – hubby didn’t have that much vacation time to spare, so if we wanted to maximize our time, we needed to go by air.  (Plus, full disclaimer, we also happened to have frequent flyer tickets for all 3 of us, so that made it a no-brainer…)  Secondly, we didn’t camp!  Since we’d saved so much money on plane tickets, we decided to splurge and pay for lodging that came with a bed.  Traveling with all of our climbing gear is obnoxious enough, so it was nice to be able to leave the tent and sleeping bags at home this time.

The term “whirlwind” however, is not an exaggeration – in 8 days we managed to climb in 3 different major climbing areas, visit 4 different National Park sites, and leave completely unscathed save a bee sting and a couple of annoying patches of poison ivy.  I couldn’t possibly cover it all in one blog post, so I’ve decided to break the trip down into several smaller trips over the course of the next week or so.  And for my fellow Southeastern compadres, this will give you multiple chances to live vicariously through some folks that were lucky enough to escape the heat and humidity for a while…

Our first stop was in Spearfish, South Dakota.  We rolled in around midnight (2 am our time…) to the Spearfish Creek Inn and were surprisingly up and at ’em fairly early the next morning  (sometimes jet lag works in good ways!)  We picked The Mohican as a starting point, figuring we could handle a couple of hours of sun before it went into the shade for the rest of the day.  We quickly found out that we were wrong – although it was pleasant under the shade of the ponderosa pines, the rock was baking and pretty much unbearable in the sun.  Thankfully by the time everyone got done with their warm-ups though, the sun had finished torturing us and moved on, leaving us in shade the rest of the day. 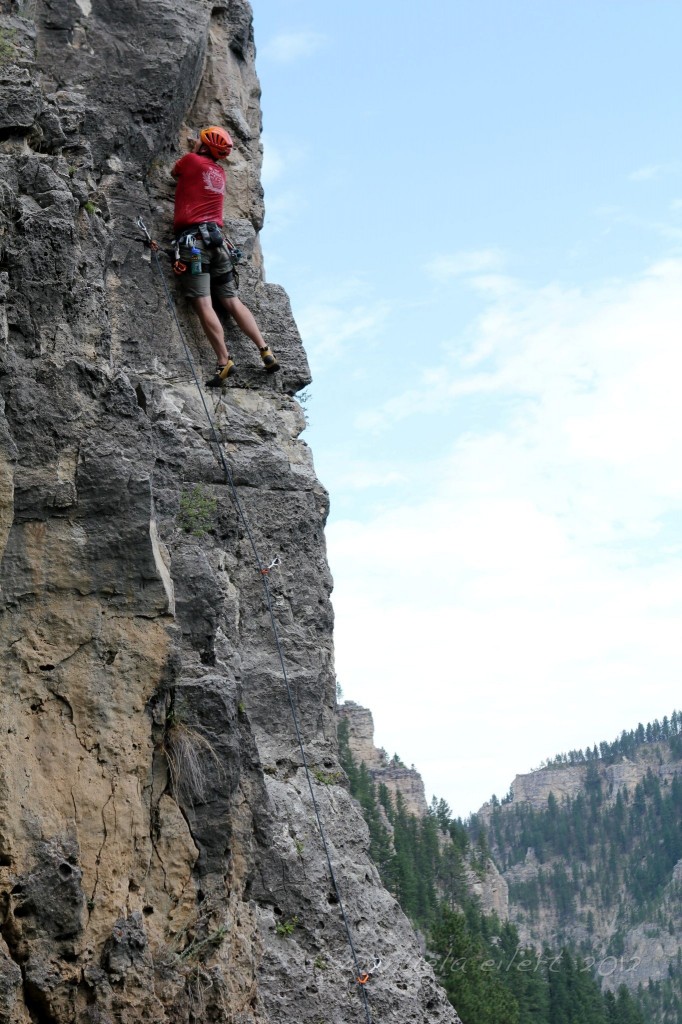 Steve warming up on some sweet Spearfish limestone!

Spearfish Canyon is definitely the place to go to avoid the crowds – we were there on a Saturday and a Sunday in the best areas the canyon had to offer, and ran into only one other party the entire time.  The rock at Spearfish is limestone – mostly tan, with large chunks of black streaks.  We found the tan rock to be pretty polished in some places, and the black rock to be much sharper, and significantly harder to read.  We’d been warned that the grading was pretty stiff, and definitely found that to be true – many routes felt at least 2 letter grades harder than what they were rated.  Nothing felt like a gimme, even the warm-ups.  I felt like I had to battle for every send, and I never even tried anything past my usual onsight level.  If our crew was had been into putting up big numbers, we would have been quite disappointed and left with shrunken egos, but the setting was spectacular and the movement and position on the climbs was outrageous – hardly worth complaining about!

Day 1 Routes:
The Mohican Wall – steep hike, but not too long, with a base that was doable for a toddler, but not ideal.  The chunky, blocky rock at the base kept Cragbaby well-entertained and a safe distance from the steep scree slopes just off the trail.
Yippee-Kiy-Yay (5.10b): Gently overhanging and sustained 5.10 moves all the way up.  Throw in the fact that being my first climb there it took me a while to read the rock, and needless to say I was more than a little pumped at the top.  Not really what I w as expecting for a warm-up…Welcome to Spearfish!!!
Lady in Red (5.10d):  The only route I did at Spearfish that felt true to grade.  Thin crux up high that was hard to read and almost spit me off at the last second.
Juggernuts (5.11b/c):  This was a battle.  And I lost.  I fought hard up through the roof, trying desperately to shake out and milk every rest that I could while I tried to unlock the puzzle of what I thought was the crux sequence – finally figured out the moves and pulled the roof clean…and then I promptly realized that what I had thought was the crux was not even half as hard as the next section.  Motivation fizzled and I slumped onto the rope to figure out the real crux, hang-dogging the rest of my way up. 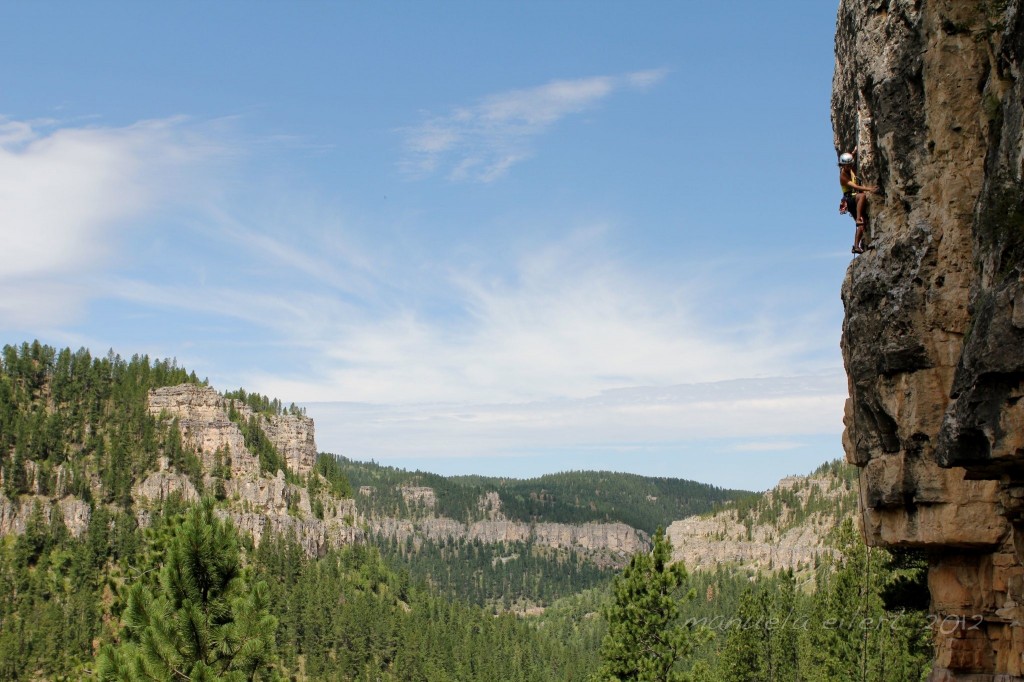 Possibly my favorite climbing shot of the entire trip…this is me on the upper section of Ka-Pow (5.10c) at Blue Sky on Day 2.

Tonight’s dinner was noteworthy because it was the first of many evenings spent eating buffalo burgers while donning a cowgirl hat.  Our evening was spent scouring the guidebook in search of rock that might be a little less pumpy for Day 2… 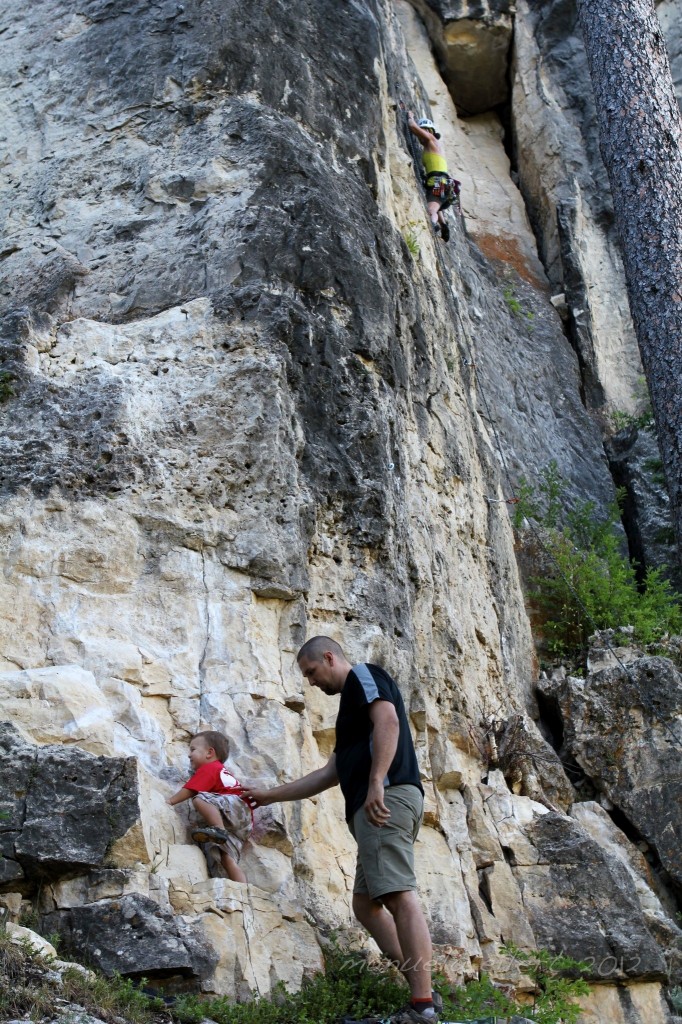 Climbing with the whole family!

Day 2 Routes:
After realizing the day before that 5000 feet was still too low to be in the sun, we opted to start our day on one side of the canyon, and move to the other in the afternoon, in effect hiding from the sun all day.  Our plan worked out rather nicely, especially since our car ride coincided well not only with Cragbaby’s afternoon nap, but also with an isolated thunder shower on the way to our afternoon destination.  Our morning was spent at Blue Sky, and the afternoon at Sunshine Buttress.  The hike to Blue Sky was pretty short, but the base was not kid-friendly at all.  In fact it was downright dangerous for any mobile child.  The narrow base trail hugged the cliffline, and then immediately dropped off to a steep, rock-strewn slope, several hundred feet down to the highway.  We actually put Cragbaby in his harness and made sure that he stayed tied in to one of us at all times.  He wasn’t thrilled about the idea at first, but at some point I think he thought we were letting him lead climb, because he wanted to wear all the quickdraws on his harness while he clambered around at the base.  Sunshine Buttress, on the other hand, was the perfect kid crag.  A 5 minute approach, and a large flat base with plenty of room to play!
Tasting Time (5.10a):  Loooong route that was pretty techy for the grade.
Ka-Pow (5.10c):  Definitely the burliest 5.10 I’ve ever been on.  I sent it, but it took everything I had – hard roof pull down low, with a couple of long and technical moves on crimps up high.  The view at the top made it well worth all the effort to get there.
Goat’s Milk (5.11a):  Outstanding route.  Crux sequence was long with really intricate and sequenced beta – but I’m gonna go ahead and call BS on 5.11a – it felt every bit of solid .11d to me. I knew this would be the last route of the day, as well as the last route in the canyon, and it was definitely worth doing again,so I rehearsed the moves a bit more as I was being lowered, and then pulled the rope and tried again.  My next attempted I botched my foot beta and therefore came up short to the clipping hold.  I lowered off again and the third go was the charm. Really?  Three go’s for .11a?  Nothing like the sweet taste of humble pie to end the weekend.  🙂 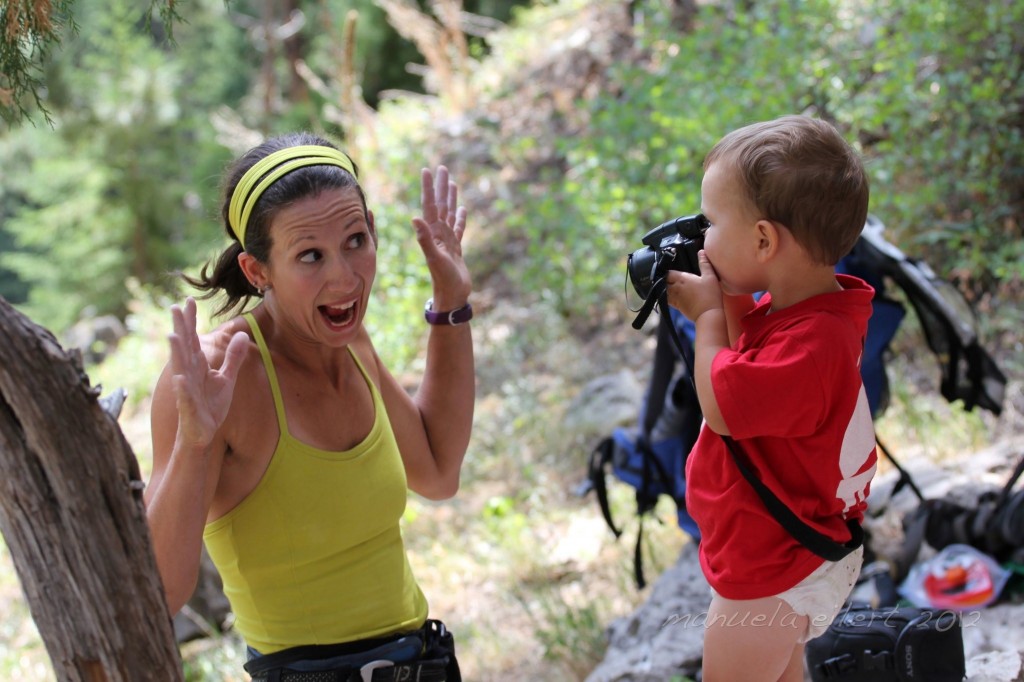 The budding photographer was snapping shots all week…

‘Round the Horn 5.10a – 5.12a:  I don’t like to project very much in new areas – I’d rather spend more of my time sampling lots of routes I think I can onsight (Non-climber’s Note – an onsight is sending a route on lead on your first try, meaning no hangs on the rope or falls), rather than getting sucked into working on one route for most of the trip.  So I thought a good trip goal for me would be ‘Round the Horn 5.10a – 5.12a.  In other words, a send of 5.10a up through 5.12a, and every letter grade in between.  Most of those grades are onsightable for me, so I figured that was a goal that would test my multi-day endurance, as well as give me a chance to push my onsight level up.  This would also still allow me to get in lots of climbs since, most of the routes would go on the first try.  I knew the 5.10’s would come naturally in warm-ups, but I had hoped to tick at least one of the harder 5.11’s in Spearfish, rather than waiting several days into the trip to tackle all the hard stuff.  But after seeing how stiff the grading was in Spearfish, I had my doubts as to whether I’d be able to meet my goal.  By the end of Day 2, my send list had all four 5.10’s (a-d), and one 5.11a, leaving 5.11b-d for Ten Sleep.   Thankfully there was a well-timed rest day in between…(stay tuned for more, and in the mean time check out my Spearfish Photo Gallery!