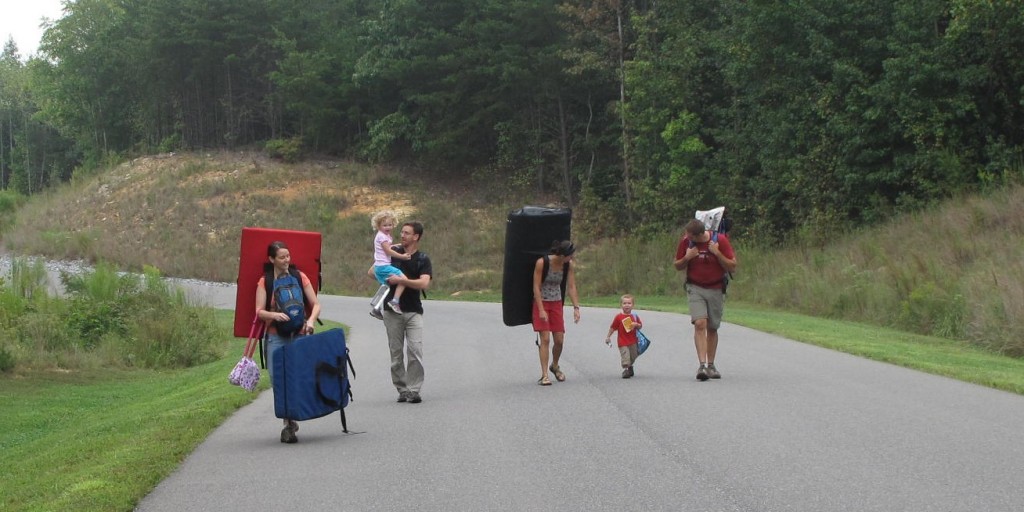 Pad people on the move…and C with his crag bag. 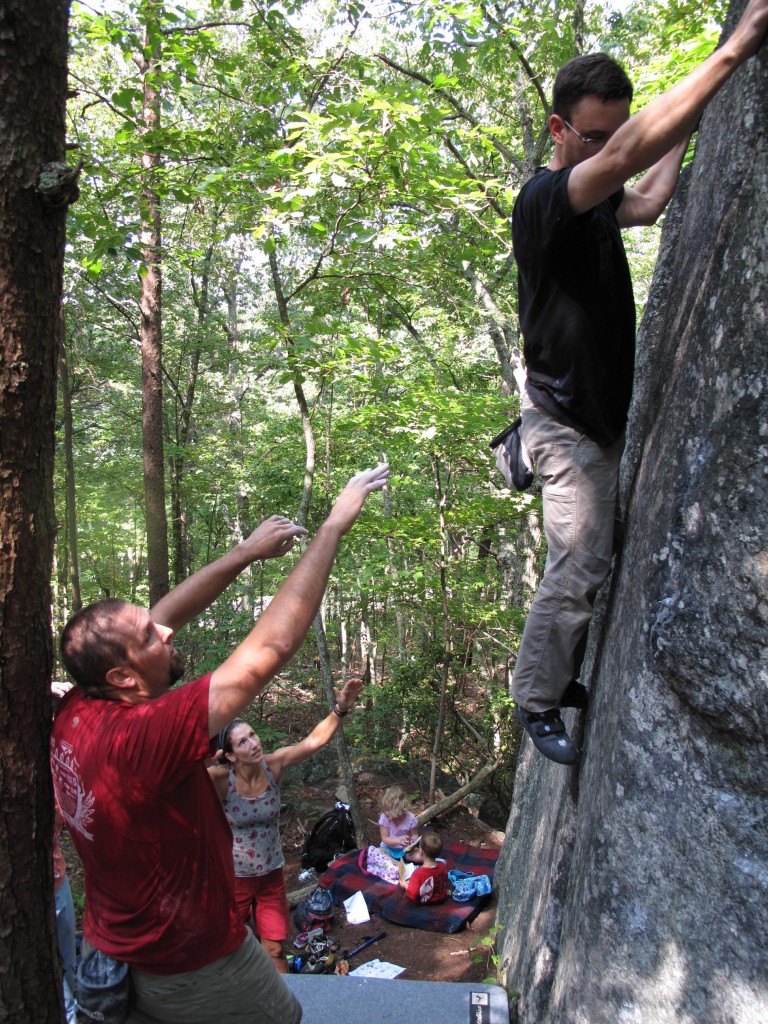 John gettin the party started on the Y-Axis boulder, while the kiddos entertain each other below.

This weekend marked 7 months (almost to the day) since I broke my ankle on a funky lead fall last winter.  I paid my dues in a boot for 6 weeks, worked my butt off on the hangboard, and got back on the sharp end of a rope the second I was given the green light.  I waited a good long while before bouldering in the gym again, and when I finally got back to it I mostly kept it to problems I had wired and could use for 4×4 training sessions.  Because the hubs and I take turns with Cragbaby-duty at the gym, I often find myself without a spotter, so it made sense to take it easy.  I was making progress however, until the beginning of June when I tweaked my other ankle 15 minutes into the approach hike at the New – nothing serious, but enough to put bouldering on the back burner again.  So here we are at the beginning of fall, with prime bouldering season on the horizon, and the thought of even a controlled jump down on a pad elevates my blood pressure.  When some friends of ours from Raleigh suggested we plan a bouldering trip together, I knew it would be a nerve-wracking experience, but would hopefully go a long way towards boosting my confidence above a pad.

Even though roped climbing has always been more of our”thing,” pebble wrestling has always been a great cold weather option for our family.  It’s an efficient way to cram getting outside, exercising, and keeping the down jackets on as much as possible into the short daylight hours of winter.  Not to mention that bouldering is a great way to improve upon one of my biggest weaknesses on a rope – the fact that I’m not very strong!  So overcoming my fear and getting my head back to where it was pre-injury is important to me.  That being said, this particular trip was about nothing more than mileage for me.

Our friends rolled in to our house early Friday evening, with just enough time for some s’mores in our fire pit.  After a lazy start on Saturday morning, we loaded up the car and made the short drive to our local bouldering haunt.  Cragbaby was psyched to have a friend to play with (especially one with pretty, bouncy curls!), and they both spent the morning scavenger hunting and collecting nature treasures with their new homemade “crag bags.”  Mia and her Mommy had been working on them all week, and they had surprised C with his very own bag stocked with crayons, paper, magnifying glass, and small satchels for storing his nature items.  He loved it so much that he refused to put it down all weekend! 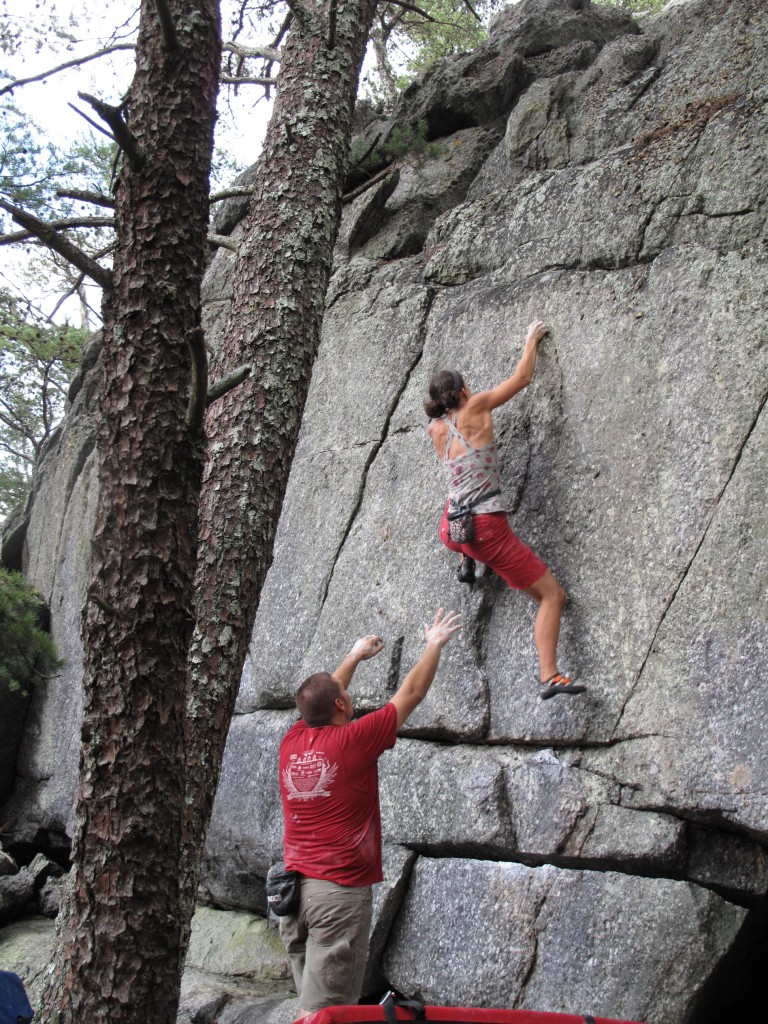 We started our day at the Y-Axis boulder, which has several vertical lines in the V0-V1 range, all with great landing zones.  Next we headed up the hill to the next group of boulders.  I did Classic Overhang Direct Finish (V2), which in my opinion is one of the best lines in the field, as well as 2+2=5, and the awkward lowball Baleen (V2).  Our next stop was at the popular Snake Jam boulder, which contains several high quality lines.  Both The Rattler (V2) and Snake Jam (V3/4) took a ridiculous amount of tries to commit to the top out for me, even though I’ve done both of those problems numerous times before.  Eventually I was able to work it out, and I think that boosted my confidence a good bit.

One of my goals for this year was Venom (V5), which I had intended to work on at the beginning of the year before getting derailed by a broken talus bone.  My friend John wanted to hop on it so I decided to give it a few go’s just to familiarize myself with the holds again.  At first I couldn’t even get off the ground, (which was pretty disheartening), but after a few tries I was consistently getting to the same high point I was at last year.  Considering how timid my head was, I’m gonna count that as progress…for now.  🙂

We ended our day on Backsplinters (V2), Galvatron (V3) and Unicron (V4), at which point the skies were looking (and sounding) rather menacing, so we packed up and headed out.  We couldn’t have timed it any better – the skies let loose just as we were all hopping into the car, and we rolled into the driveway right at dinnertime.  Our day was drawn to a close with takeout pizza and climbing videos, but my smile has lasted well into this week.  Though it wasn’t without some frustrations, it felt good to chisel away at some of my fears, and it felt even better to do it in a no-pressure atmosphere surrounded by friends.  Camaraderie at the crag makes up for a lack of crushing anyday!