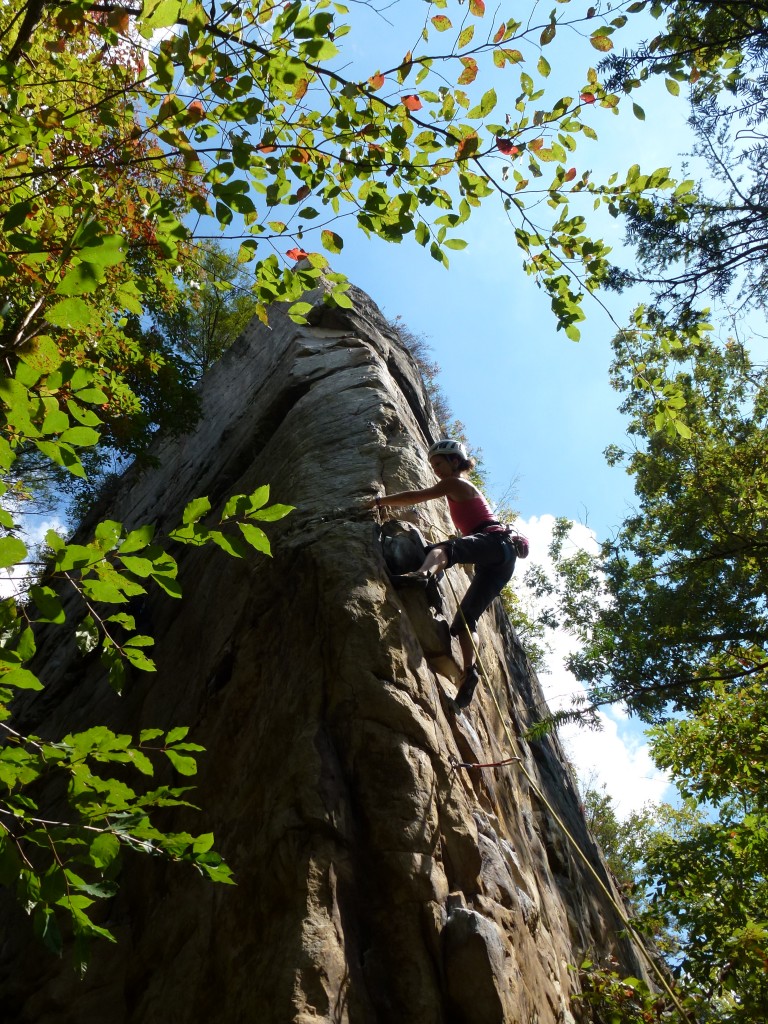 Just after the bouldery start of Under the Milky Way (5.11d)

And I managed to hop on it this time.  (It’s about time…)

SEND TRAIN:  The extreme sending phenomenon that occurs when a group of climbers are projecting together and one person finally has a breakthrough – the rest of the crew feeds off of that psych, and all of a sudden everyone is crushing left and right.

In last week’s trip report I alluded to the fact that I had felt like I had been in somewhat of a climbing slump for the past few weeks.  It seemed like no matter how hard I tried, I was always coming up just a wee bit short..  We were originally going to stay home this weekend, but perfect weather (and the fact that I’d been so close the week before on Bullet the New Sky…) gave us an offer we couldn’t refuse.  We spent our first day at Summersville Lake, which is outrageously beautiful this time of year.  I never get tired of looking out behind me and seeing that view.

Jesus is My License Plate (5.10d):  Pumpy little warm-up, with an exciting little finishing move. Under the Milky Way (5.11d):  This mega-classic arete was my only goal for today.  I’d never been on it, partly because it’s been a while since we’d been to the Lake, but mostly because I wanted to wait to get on it until I thought I would have a good chance to flash it (Non-climber’s note: a “flash” means that you led the climb with no falls or hangs on the rope the first time you try it – so obviously you only get once chance to flash a route).  The route consists of a really bouldery start to a small ledge where you can get a no hands rest – then it’s tippy tippy tip toe up a thin arete to an amazingly exposed finish on the prow.   I was psyched and ready to send until I saw my friend get man-handled by the start.  The beta he ended up using looked ridiculously hard, and I knew there was no way it would work for me.  I had my doubts when I tied in, but I managed to figure out some footwork that made the moves pretty secure and I blitzed through the opening section…until I got stonewalled trying to pull myself up onto the ledge for the no hands rest.  I kept traversing back and forth around the arete, desperately trying to figure out how to get my feet where my hands were.  I’m not really sure what the problem was other than the fact that my forearms felt like noodles – the holds are gigantic there, I just panicked and couldn’t get my body position right.  After a long time (literally almost 10 minutes) I finally groveled onto the ledge where I stayed for quite a while to de-pump.  The rest of the route was high-step heaven, and I savored every minute of it.  This is one I wouldn’t mind doing every time I come to Summersville.

Narcissus (5.12a):  My friend Bennett was working on the direct (12d) version, and since he was in between burns and the draws were already up I decided I had nothing to lose so I hopped on.  Narcissus is a quintessential route at the New, and probably as anti-Cragmama in style as you can get, so it felt great to clip the chains, even though I hung on almost every bolt.  The bonus was that I felt really strong on it – linking it together would be a beast, but it actually felt within reach.
Trigger Happy (5.10a):  I hopped on this at the end of the day because it looked like it’d be fun…and it was.  Big flakey jugs with some surprise slopers up top just to make sure you’re still awake.

Sunday morning dawned clear and COLD (38 degrees!) – absolutely perfect for Endless Wall.  I only had eyes for Bullet the New Sky (5.12b), Steve (aka the Crag-Daddoo) had plans to send Discombobulated (5.11b), and my friend Bennett wanted a go at Mississippi Burning (5.12b).  After a warm-up on Legacy (5.11a), I took an initial lap on Bullet.  I felt really confident going in – the first hard moves down low went off without a hitch, and I pulled through the crux and made the 5th clip without any trouble.  I had one more hard sequence to do before the rest of the climbing backed off to 5.11- or so for the last 40 feet.  Certainly not a gimme, especially with such generously spaced bolts, but I had it wired well enough that I knew once I got through the next few moves it should be in the bag…but for the life of me I couldn’t remember how to get through that next sequence.  I was starting to feel the pump settling into my forearms so I knew I needed to keep moving.  I slapped up the arete, fell, and then immediately saw the little (hidden) foothold I’d missed.  I took note of it, finished the route to dial in my beta some more, and then came back down to cheer on Steve. 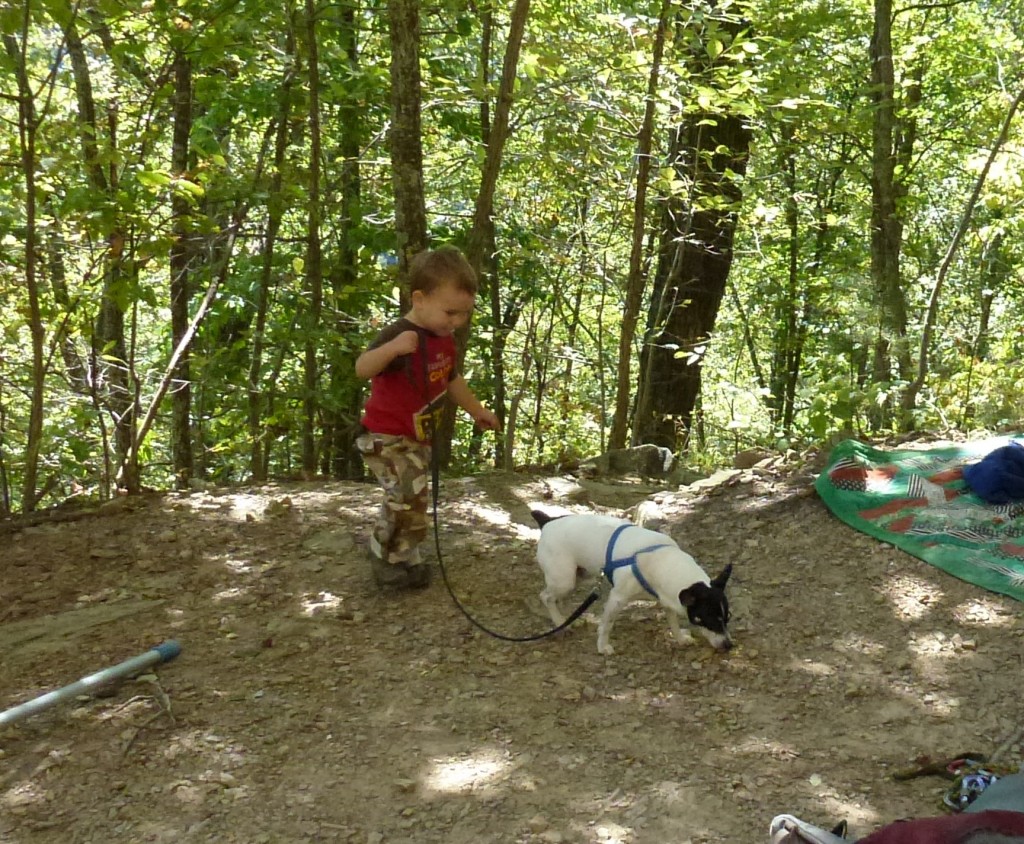 C with his new friend, “Buddy.” I’m not sure who is walking who…

No warm-up for Steve, he hopped on his project right out of the gate, and sent it in fine style, with what appeared from  below to be rather minimal effort.  And with that, the send train started boarding…the next run on Bullet the New Sky went perfectly for me as well as my friend Sam and some other folks that happened to be there too,  Bennett sent Mississippi on his next go, and my friend Matt had back to back flashes of both Legacy and Discombobulated.  Everyone left contented and satisfied – we’d each come with one or two specific goals in mind, and were able to cross off them all.

And that’s the power of the send train…it’s entirely possible that one of these days one of us will get left out and be the only one that didn’t get their tick.  But it hasn’t happened yet – I think that’s because there’s value in the “communal psych” that builds with each person’s progressive success.  The concept is simple, but brilliant – when I see my friends do cool stuff I’m happy for them, and it motivates me to want to do cool things too.  The result?  Chugga chugga choo choo…Did anyone else take a ride on the send train this weekend? 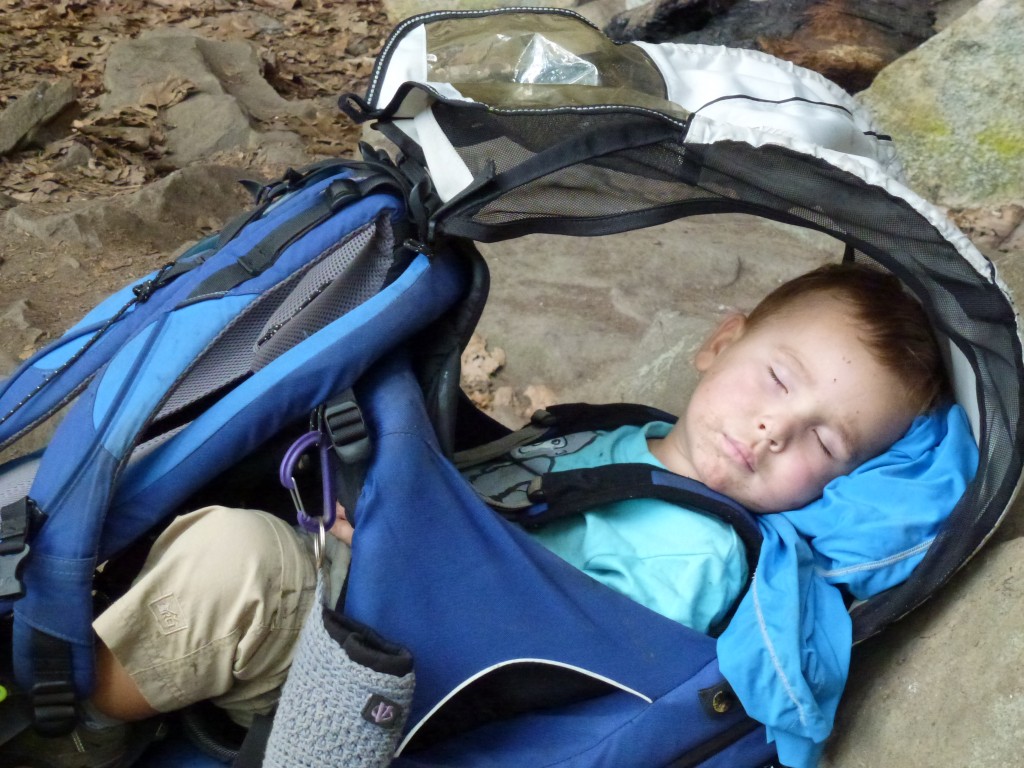 This is how we all felt on Sunday night…

7 Responses to “New River Gorge: The SEND Train has left the station…”