Last week I had quite the chuckle when I happened to notice a rather random circa 2008 photo of my husband and I floating around on facebook.  Our old gym, Triangle Rock Club, had put it up on their page in a “hey we know those people!” kind of post.  But Triangle Rock club had actually snagged it from another climbing gym’s page – a gym that neither I nor my husband have ever even heard of, let alone set foot in before!  It was used as a prompt for their members to post where they were headed for the long weekend, and I have no idea where they found the photo.  Actually that’s not entirely true.  I know exactly where they found the photo, it just amazes me how much digging they had to go through to get to it (which probably means their front desk staff has way too much time on their hands…) 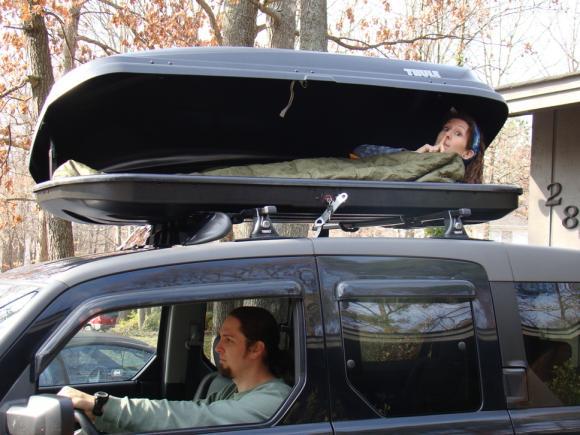 Anyway, after the shock of seeing this ridiculous old photo, it only seemed fitting to use it as material for a Sentimental Snapshots post.  The story behind it is actually pretty silly.  On a whim we decided to enter a photo contest on Rockclimbing.com, sponsored by Sierra Designs.  The rules were quite simple – submit a creative photo involving a sleeping bag.  Ten finalists were chosen, then the voting was left to the cyber-masses.  First prize was a pair of sleeping bags, and second prize was 2 sets of down booties.  We actually made it to the finals, but unfortunately didn’t win.  Apparently our family-friendly photo (our pic was one of the few that didn’t involve multiple people per sleeping bag), couldn’t compete with father/daughter snuggle time or half-naked women.  If you’d like to see the rest of the entries, you can click here.  I’m assuming that’s the same page the unknown climbing gym stumbled upon when they found our photo.

I’m also assuming that when I submitted our photo for the contest there was some sort of fine print about giving up rights to the picture, so I certainly don’t feel like that gym was out of line by reusing the photo.  It does however bring up the point that nothing ever really disappears once it’s on the internet.  Most online writers, myself included, have a copyright notice posted somewhere on their site, but I’m sure that’s not much of a deterrent to some.  On a somewhat regular basis I get emails from folks asking if they can re-post something that I have written (which I always agree to, provided it’s clear that I’m the author of the piece).  And I know I’ve certainly contacted people a time or two to ask permission for reusing a photo/quote/re-post/etc.  But I wonder how often that important step is ignored, and how much plagiarism is really going on in the highly technological age in which we live…

But as for this particular picture, I’m actually flattered that some random climbing gym found it funny enough to re-post.  Hey, and it had over 20 “likes” last time I checked…kinda makes me wish RC.com would have the contest again so we could reenter.  Perhaps our new “fan base” could be solid enough to strip the Snuggly Father/Daughter pair of their winning title.

2 Responses to “Proof that Nothing is Ever Lost in Cyberspace…”