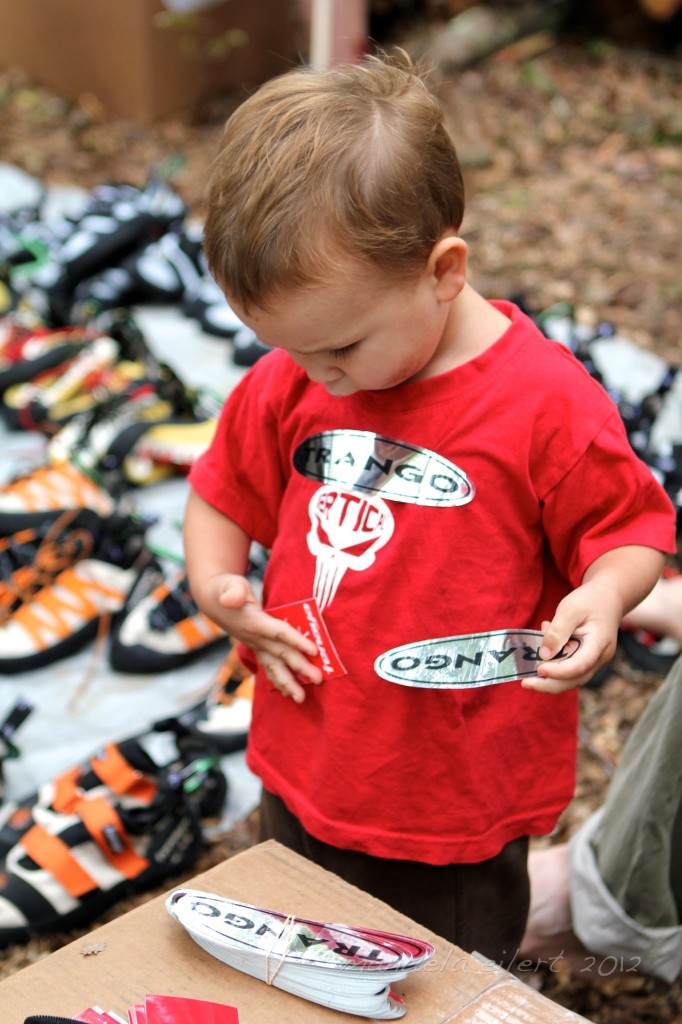 This weekend marked an exciting milestone for the American Alpine Club, as well as any climber frequenting the New River Gorge (which is probably the majority of us in the Southeast…)  The “Craggin’ Classic” event gave climbers a chance to get a sneak peek at the latest progress on the new AAC climbers’ campground.  It’s pretty bare bones right now, but from the sounds of it, it has the makings to become a staple part of the NRG!  The crowd was small, but the camaraderie was high, and it seemed as though everyone was relieved to finally see some fall temps again! 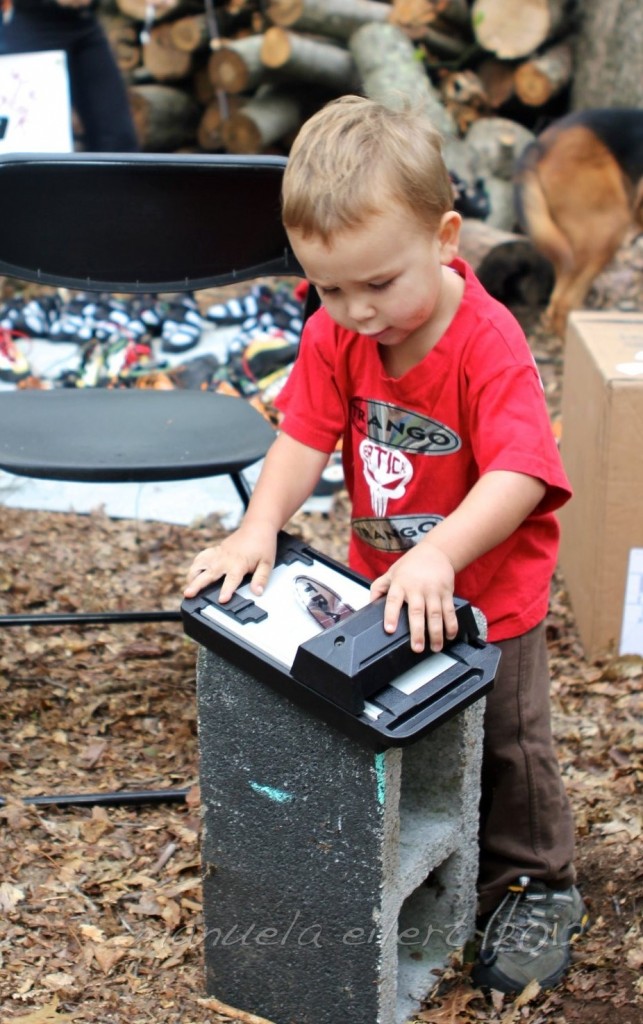 “All right m’am, I just need a credit card number…”

I was especially excited to have the opportunity to help out with the Tenaya shoe demo with fellow Trango teammate Dan Brayack, and Trango rep Adam Sanders.   Cragbaby took it upon himself to be don the title of “sticker-passer-outer.”  No one could resist his charms (and no one left without at least 3 stickers…)  The demo was a chance for anyone and everyone to try out a new pair of Tenaya climbing shoes.  (For my thoughts on these fabulous shoes, click here).  Climbers were able to get fitted in their shoe of choice at the event, at which point they could climb to their heart’s content in them, so long as they were returned back to us during the evening festivities.  (One girl liked her Tatanka’s so much that she bought them right there on the spot!)  But now I’m getting ahead of myself…after spending the early morning hours talking with folks about shoes and drinking way too much coffee, it was finally time to climb! 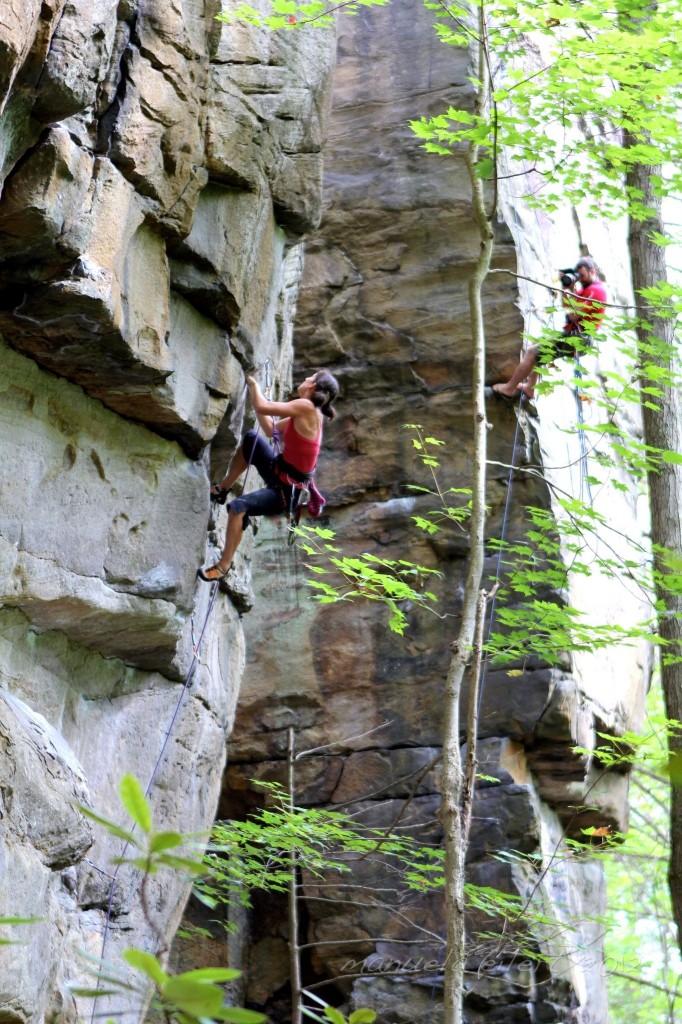 A rare moment when the stars (clouds) aligned.

We headed out to Kaymoor (Butcher’s Branch) and after a quick run up Flight of the Gumby (5.9+), I hopped on Lost Souls (5.12a).  Since Trango just recently purchased an ad in the upcoming edition of the NRG guidebook, Dan was hoping to get some good images to use as the backdrop for the advertisement.  Climbing photo shoots are a funny thing.  The goal is to get an image that packs natural, fluid movement into a neat little package all wrapped up in strategic product placement.  The end result will hopefully be a beautiful and artistic shot that showcases Trango climbing gear on a classic NRG route.  But the actual photo shoot was a lot of hang dogging and talking while we waited for the lighting conditions to be perfect.  Then Dan would bark out orders to climb and I would work a sequence, drop off, and repeat to make sure Dan got his shot.  Every time Dan pressed the shutter button it sounded like machine guns were going off beside me, so it’s not surprising that he took close to 400 pics of just that one route…I didn’t get to see any of the shots, but the next day Adam mentioned one good one that he saw where my tongue was sticking out and my eyes were really big.  Hmm, just the look I was going for…

I obviously didn’t send Lost Souls on the photo run, but I got on it several more times throughout the day – and unfortunately none of those other attempts were successful either.  I didn’t have trouble with any move in particular, I just couldn’t do them all in a row without falling.  Oh well.  I was definitely disappointed, but there was no room for pity parties with an evening of shenanigans ahead.  It was great to enjoy some Pies n Pints and then catch up with some of my Raleigh buddies from Triangle Rock Club. 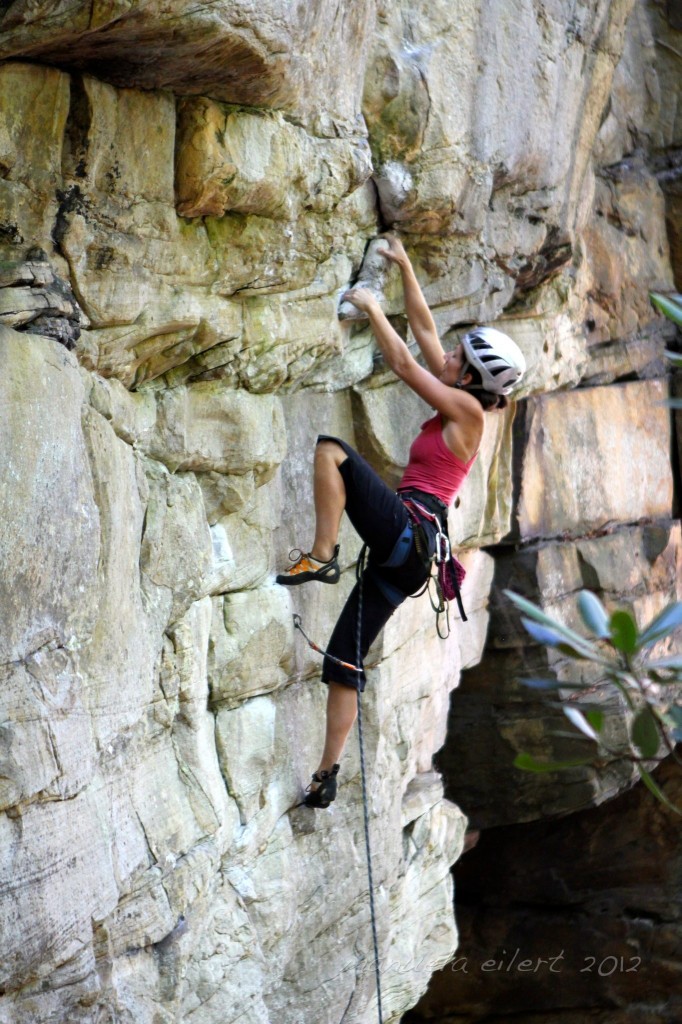 The next day dawned cloudy, dry, and with a high in the low 70’s – a perfect day for giving Adam a tour de Endless Wall!  Here’s what we hopped on…

Discombobulated (5.11b):  This one had been on my 2011 Hit List, and I hadn’t been on it since I first redpointed it a year and a half ago.  The crux was just as heinously reachy as I’d remembered it, but the rest of it felt easier than I was expecting, so that’s good progress.
Mississippi Burning (5.12b):  After seeing the scary clips on this one, this seemed like a good candidate for a first lap on toprope.  This ended up being a great decision, as I flailed and flopped my way miserably through the crux.  Clearly not the route for me right now, but the rest of the route was quite fun –  5.10+ climbing up a beautiful arete.
Bullet the New Sky (5.12b):  This is my latest obsession.  Another arete climb, but this one is much longer with a less powerful (and far less reachy) crux, but with much more sustained climbing above it.  It’s an exercise in high steps and keeping your head together high above your bolt, and I loved every minute of it.  After my other 5.12 experiences this weekend, I really wasn’t that confident going in and figured I’d be lucky to get to the top.  But I was pleasantly surprised that I only had trouble in 2 short sections down low, both of which I was able to work out pretty quickly.  I thought it was worth another shot, and I surprised myself with falling only at the crux.  I was able to dial in my beta a lot better for the upper section, and I’m convinced I’ll be able to send it soon. 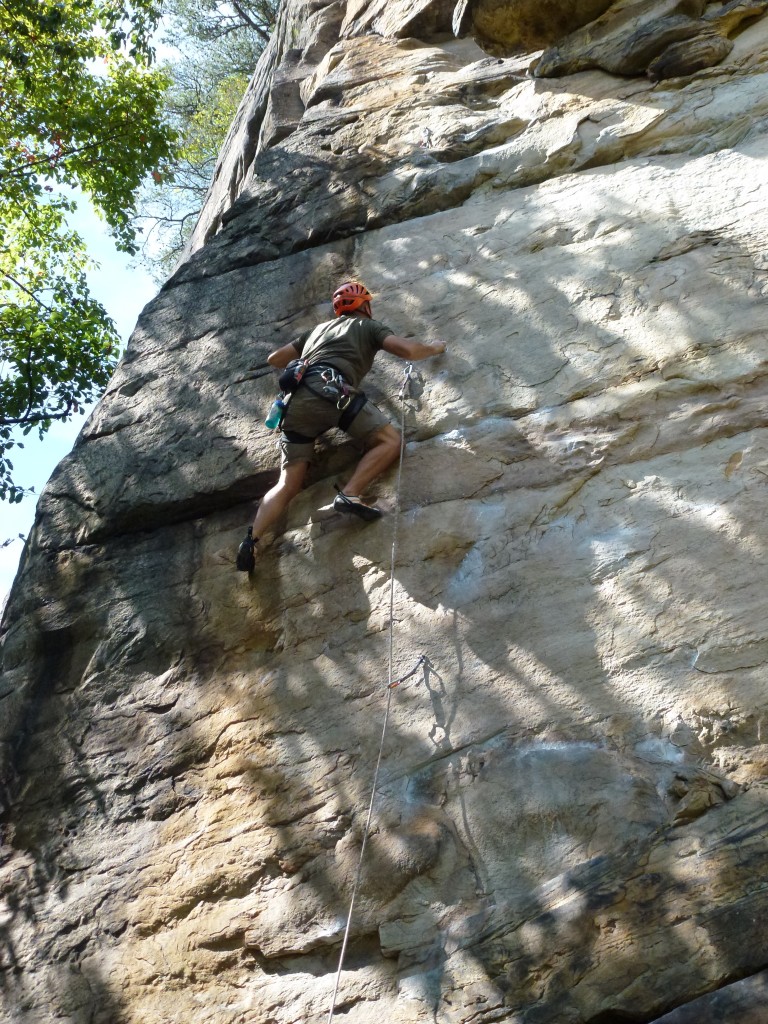 Steve gettin’ through the business on Discombobulated (5.11b)

Legacy (5.11a):  Despite it’s uber classic status, this was the first time I’d been on this route.  A couple of my friends had been on it earlier that morning, and had left the draws up for me since I had said I wanted to do it, but to be honest I’d forgotten about it.  I’d be lying if I said part of me wasn’t disappointed when I came around the corner at the end of the day, still pumped from New Sky, and saw those draws still hanging on Legacy…But I dutifully tied in and started up the route – fun face to a straightforward roof move to a no hands rest at the base of a funky dihedral that climbs like a trad route.  Exiting the dihedral my pump clock started ticking faster and faster and I had trouble committing to the sloper traverse with my last bolt below my feet and way to the left.  I thought long and hard about climbing back down to the bolt to rest, but I’m so glad I didn’t because there was a giant meat-hooking, arm bar waiting for me 5 feet later (as well as another bolt, thankfully…).  I felt like the hardest moves were right before the anchors, and I was definitely running on fumes by the time I got there, but I managed to hang on for the flash, which was a great way to end an already great weekend. 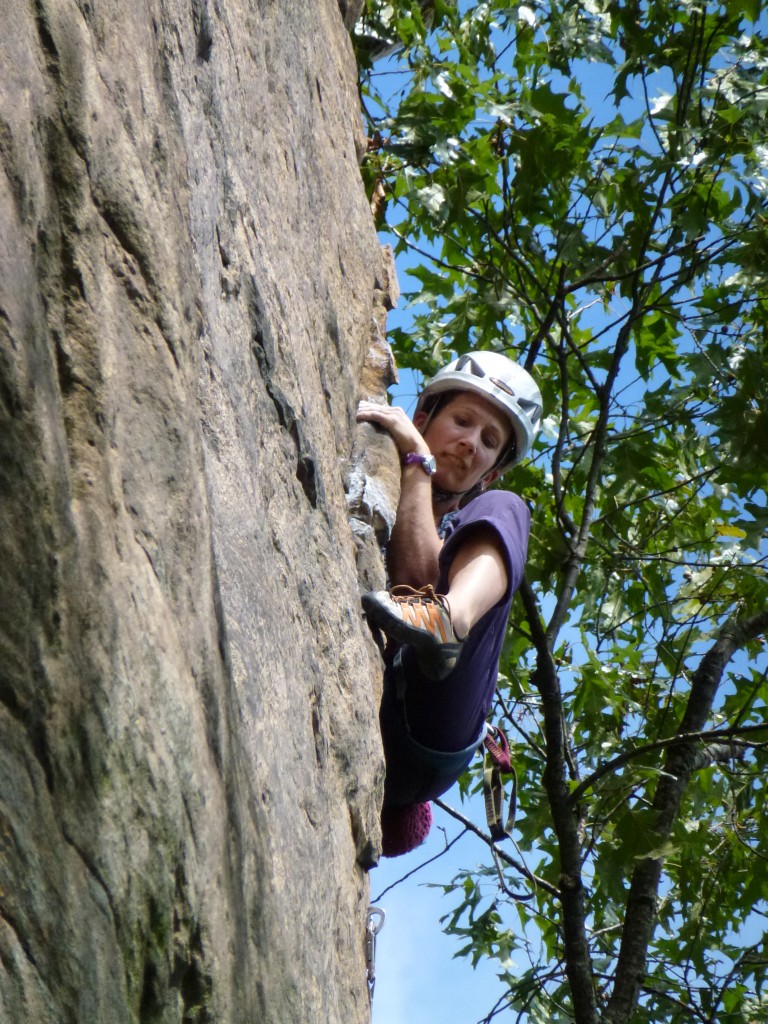 Peeping around to find a foothold on Bullet the New Sky (5.12b)

Although once again this trip didn’t end with any epic numbers for me, I think it was a good boost in confidence.  I’ve been feeling a little down recently about my 5.12 goal for the year.  I’ve got a lot of “almost” projects floating around that I just can’t seem to wrap up.  Looking at it objectively, I think a lot of it has to do with the fact that we’re just now coming out of the worst sending conditions of the year.  Also I think I’ve been pushing myself to get on things that aren’t really “my style,” in hopes to improve my overall climbing ability.  It’s been fun getting out of my comfort zone, and I think those experiences have made me a more well-rounded climber, but it has come at the price of less sends on paper.  Getting on Bullet the New Sky almost felt like a reward, since it was nothing but that tic-tacky, techy stuff that I love so much!  I kinda wish I had gone straight to it yesterday instead of tiring myself out on Mississippi.  But even though I didn’t send it (yet), it’s the first .12 in a long time that has felt doable from the outset, and I am chomping at the bit to get back to it and cross it off!  Plus it’s good to have a brand new set of sequences to run over and over through my head on my afternoon jogs…

3 Responses to “The NRG Craggin’ Classic…”