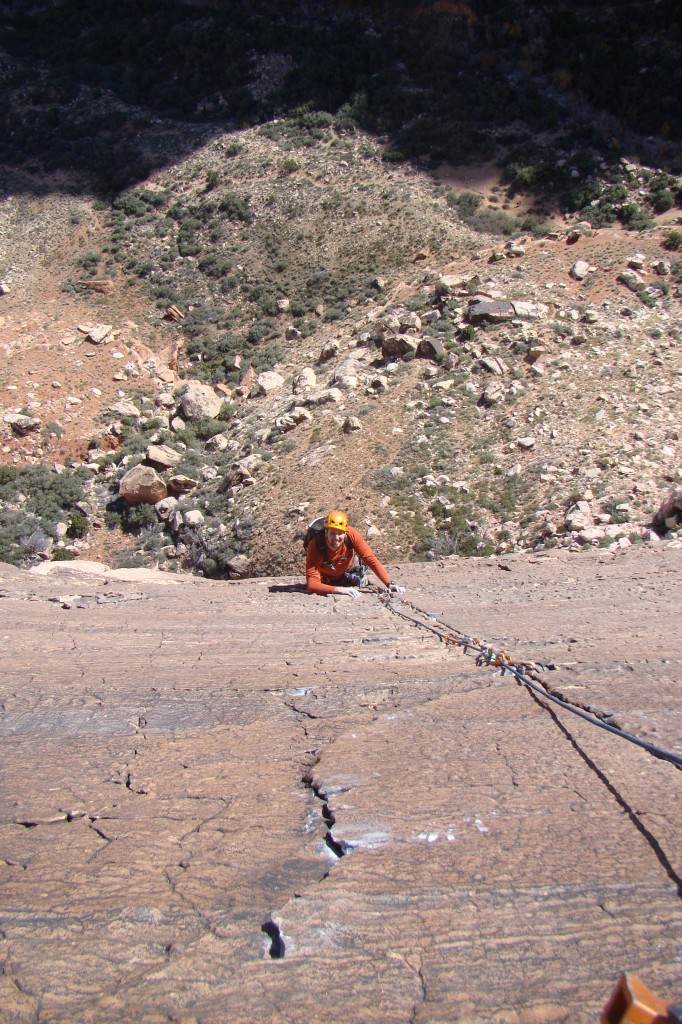 What do you get when you combine the lights of Vegas with the sandstone of Red Rocks?  A perfect weekend with just me and my hubby!  I flew in to meet Steve late Thursday night (he’d been at a conference all week for work…so he says anyway 😉 ).  One of our main objectives for this trip was to take advantage of being sans toddler and do some multi-pitch trad routes.  (Non-climber note: Routes that are longer than one rope length are divided into smaller chunks, usually around 100-150 feet apart, called pitches.  Sometimes each pitch will vary in difficulty, with the route as a whole receiving a difficulty rating of whatever the hardest pitch is.  The first person up, called the lead climber, will stop at the top of each pitch to belay, and the second climber will then follow up.  “Trad” routes require that the leader place their own gear into the rock for protection, while the partner removes it on their way up.) 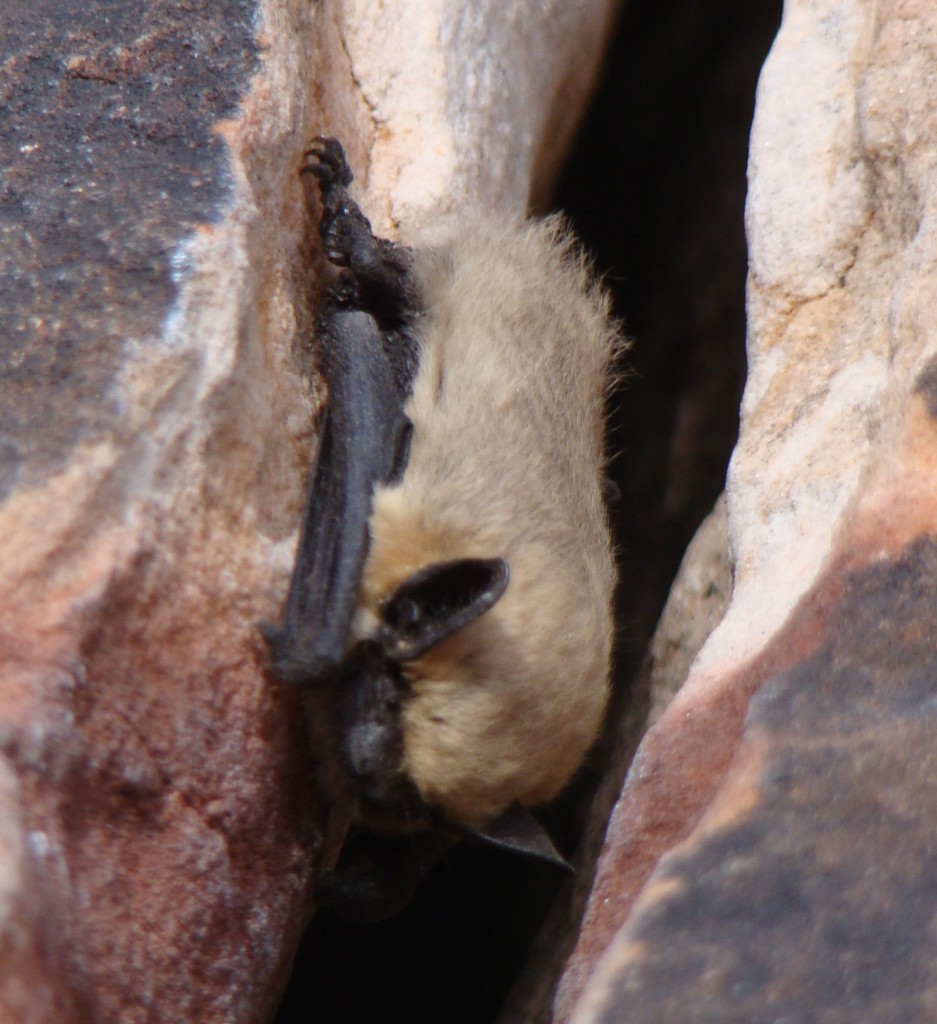 A fuzzy friend on pitch 2…

Here’s the breakdown of our individual days…

Day 1:  BIRDLAND (5.7+), 600 feet
Our goal for the first day was to get our “multi-pitch legs” back.  Except for a smattering of day trips to Stone Mountain last winter, Steve and I hadn’t been more than one rope length off the ground together since before Cragbaby was born.  We were looking for something uber-classic that involved easy, mellow climbing, straightforward route-finding, and spectacular views…and Birdland couldn’t have been any more perfect, so thanks to the countless folks who recommended we add it to our tick list!  The hike was pretty short, by Red Rocks standards, a relatively flat stroll through the desert brush for 30 minutes or so before scampering up some 3rd class terrain to reach the base of the route. 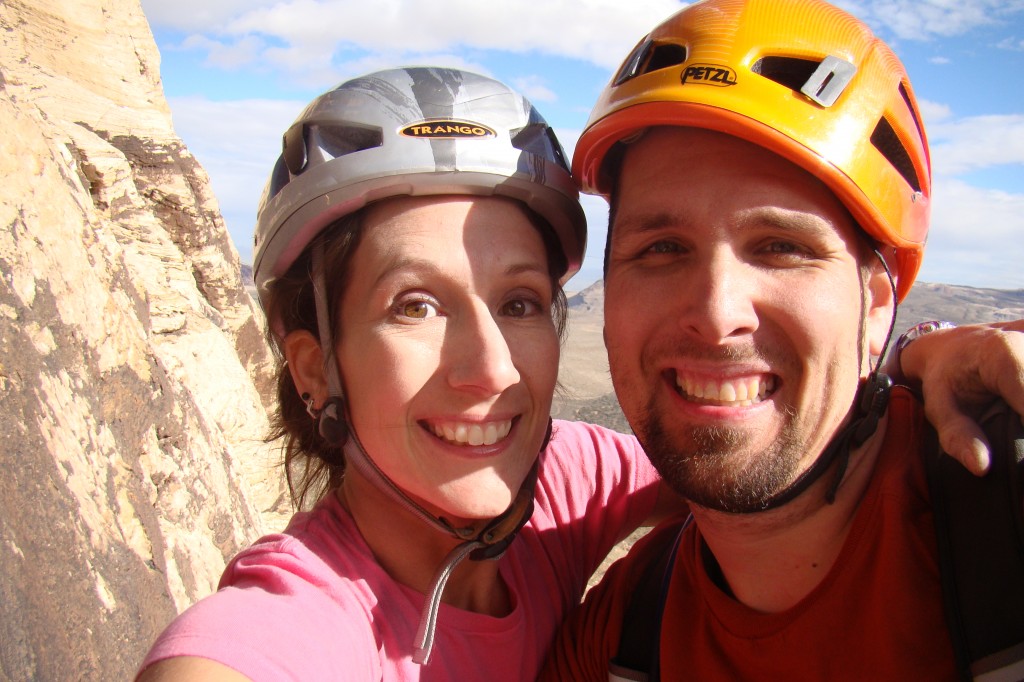 Self-portrait at the top of Birdland!

I led pitches 1, 3, and 5, and Steve took pitches 2 and 4.  Highlights included seeing a very small, fuzzy bat in a crack on pitch 2, a fun traverse followed by a steep jug haul on pitch 3, and of course pitch 5, aka the “money pitch” – an outrageous finger crack that culminated with the hardest move on the route just 2 feet below the anchors.  UN-highlights included going 5 wide on the somewhat hanging belay of the 4th pitch…apparently we weren’t the only ones that heard Birdland was good!

Day 2:  Sport Climbing in Calico Hills
We wanted to have one day of clipping bolts, although if we had it to do over again, we’d definitely leave the quickdraws in the car and hit up another long trad route.  The rock quality in the hills wasn’t nearly as good as the rock in the canyons.  We found some routes harder than their original grade due to holds that had broken off, and even found a few bolts that were in pretty questionable rock.  Maybe it was just the particular areas we went to.  But despite the fact that the climbing was a bit frustrating, the views were excellent, and it was still awesome for Steve and I to be able to spend the whole day together.  Being so close to world class sport climbing at the New with just a couple of extra hours to the Red, I think we often take for granted what we’ve got in our backyard, and this was painfully obvious in the Calico Hills…But we still managed to find a few diamonds in the rough – Caustic (5.11b) and Save the Heart to Eat for Later (5.12a) at the Cannibal Crag, and Under the Boardwalk (5.11a) at The Pier. 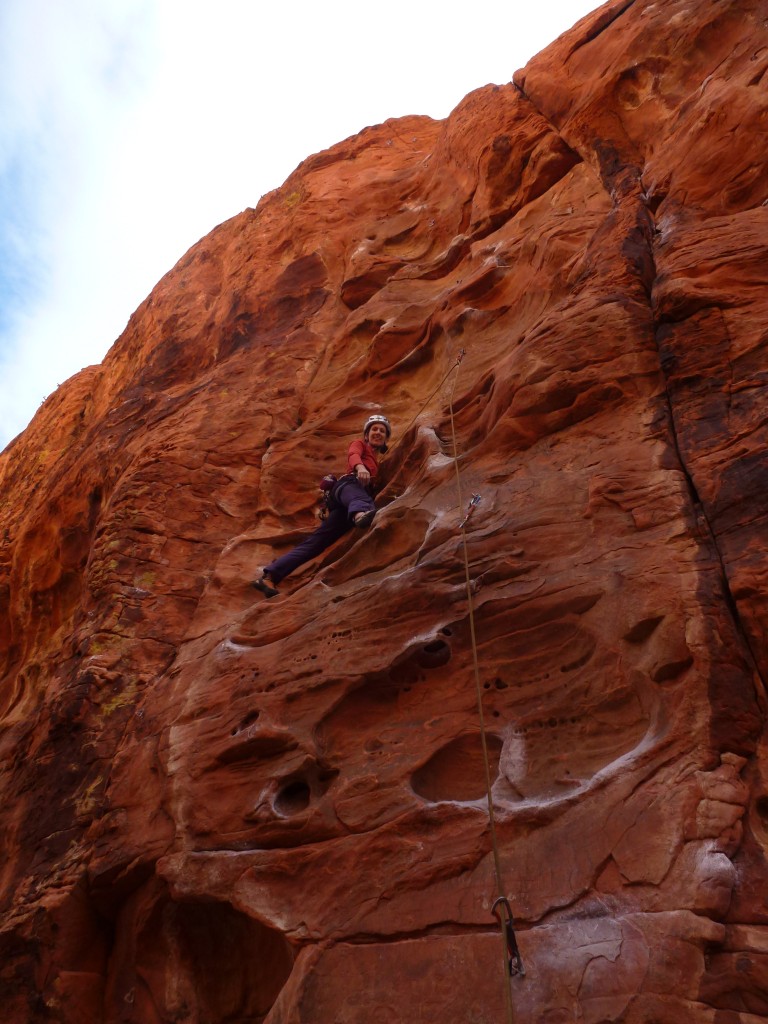 Copping a rest on the “butterfly wing” holds of Under the Boardwalk (5.11a)

Day 3:  ARMATRON (5.9), 650 feet
On our last day we decided to up the ante a little bit and tackle a line on the Brownstone Wall, high up in the recesses of Juniper Canyon.  A nice thing about Red Rocks hiking as opposed to East Coast approaches is that you can see your final destination from a long way off, often from the parking lot, making it difficult to really get “lost.”  Choosing the most efficient path out of all of the braided trails, however, is another story.  The first lesson we learned was not to trust the approach times listed in the guidebook unless you are familiar with the area.  It took us over 2 hours to reach the base of our route, and the last hour of hiking was mostly 3rd and 4th class rock hopping up a very steep gully.  To be honest, had we known the pre-climbing effort this route required, we would undoubtedly have chosen something else, but by the time we realized how involved our approach was, we were way too committed to turn around.  Thankfully, the climbing did not disappoint us!  (What was disappointing, however, was the fact that we had to wait around at the base for an hour while a party of 3 finished up the first pitch of their route, which was unfortunately shared with ours). 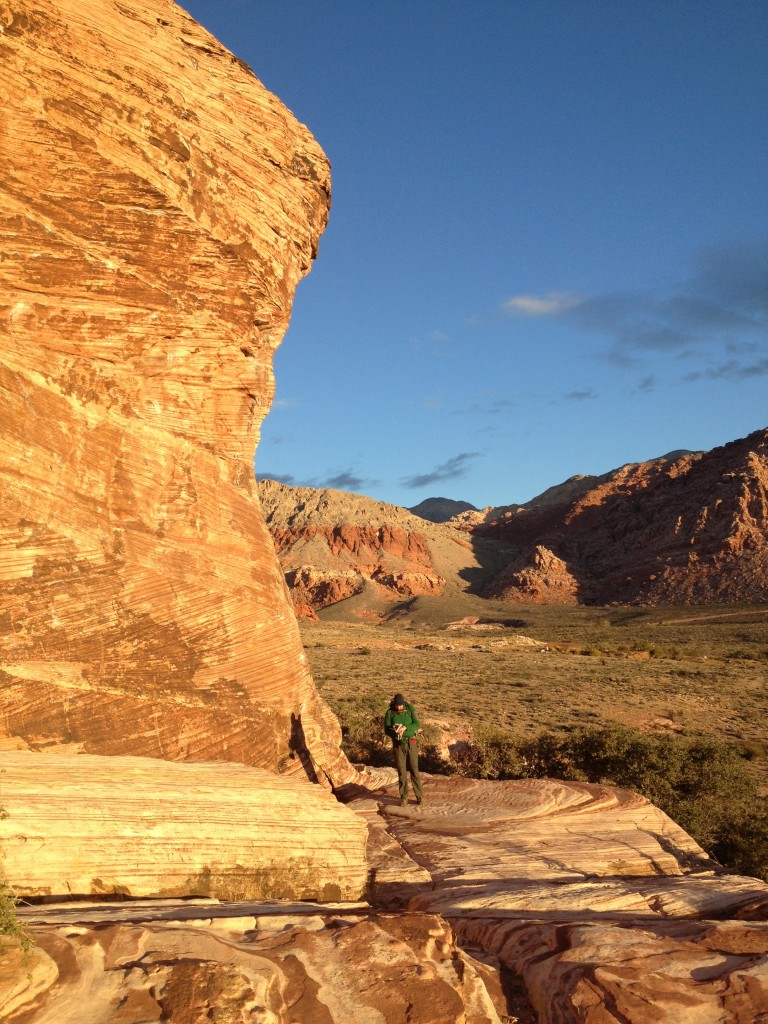 Steve getting his bearings at the Cannibal Crag

The first pitch was a mix of bolts and gear, and clocked in around 5.8.  Steve led that pitch, and then I took the 5.9 pitch – 2 thin finger cracks separated by a bolt-protected traverse.  The belay station for this pitch was significantly higher than I was expecting, and by the time I got there I had only one sling left and was definitely ready for a break.  The next pitch was Steve’s lead, and although only 5.6, looked pretty intimidating – 160 feet of tick-tacking up perfectly varnished plates that were never quite as incut as we were expecting. 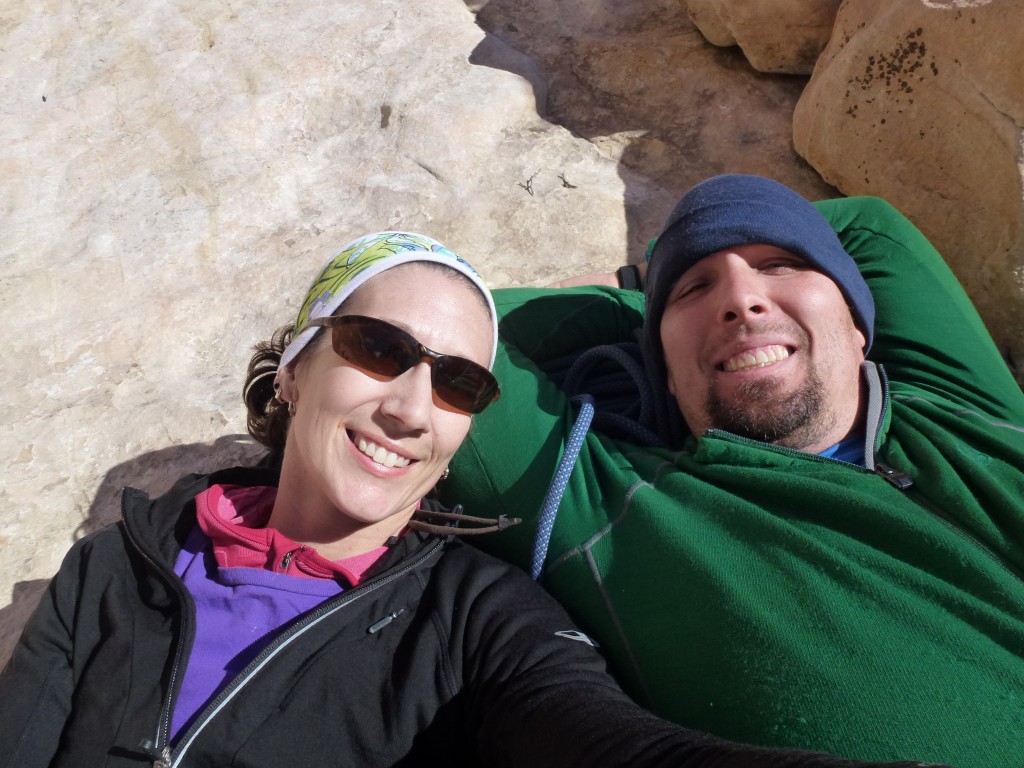 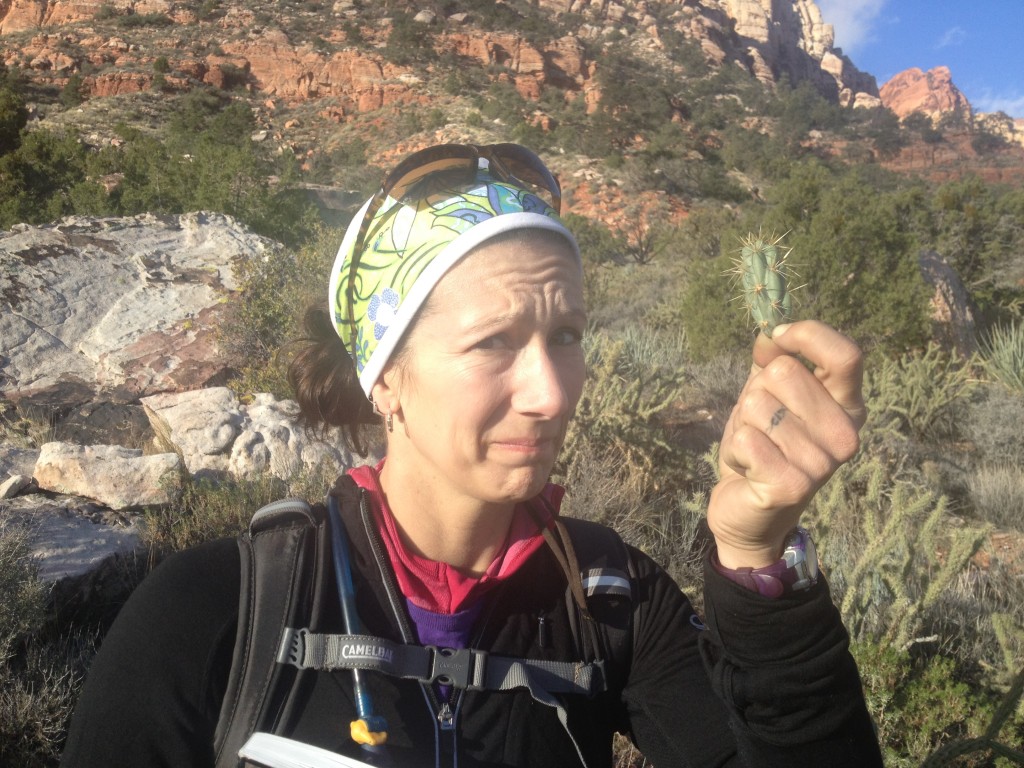 By this point it was approaching 1:30 or so and we had a decision to make.  We had already done all the classic sections of the route, so we could either continue on for another couple of pitches of so-so climbing to reach the summit, or go ahead and rappel back down to the base of the route.  Continuing on would let us sign the summit register at the top, but would add on 45 minutes of gully scrambling (provided we could navigate it easily enough), as well as the extra time it would take to climb the remaining pitches.  Rappelling from mid-way up would be a much faster option, provided our ropes didn’t get stuck on any of the millions of plates, horns, and cracks that all appeared at the ready to devour a rope. 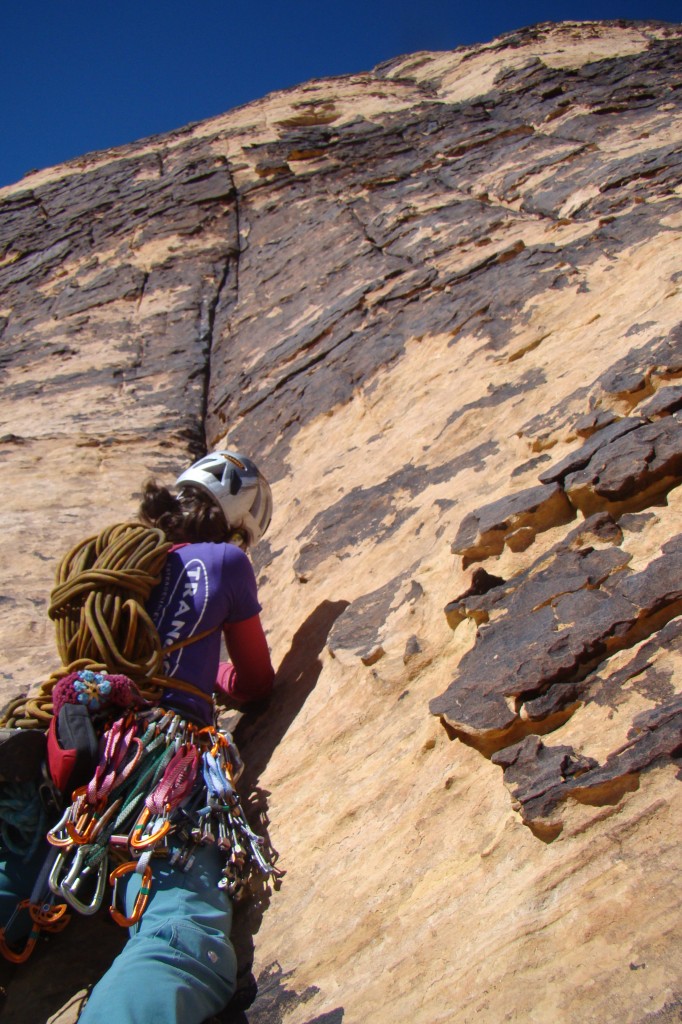 Splitter goodness on pitch 2 of Armatron!

After some quick calculations we realized that if we continued we’d have to book it down the gullies in order to reach the mouth of the canyon before sunset, and would pretty much ensure that we’d have to cross the river in the dark.  Although we had our headlamps with us, the dealbreaker was when I realized we wouldn’t make it back in time for C’s good night phone call, and since I hadn’t prepped my parents for the possibility that we might be late, we didn’t want anyone to worry.  Besides, our flight was leaving that night, and by that point we definitely had home on the brain and didn’t want anything to keep us off that plane! 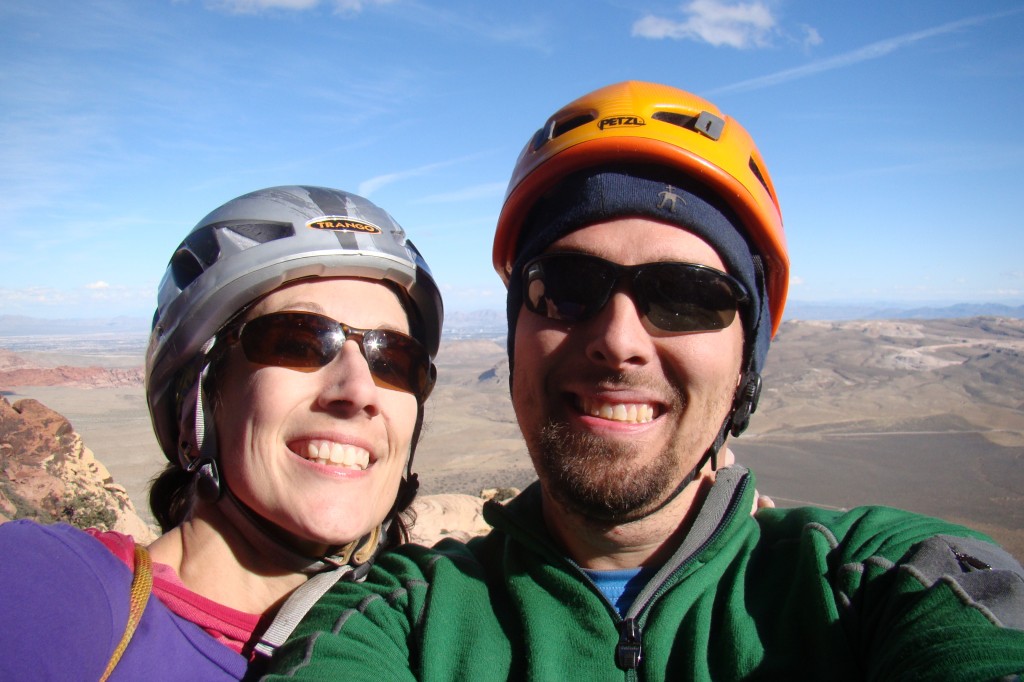 Our high point on the Brownstone Wall – with the Vegas Strip visible way in the background (in between our ears..)

Surprisingly, neither of us were disappointed at all that we had to bail.  We’d done all the high-quality pitches, and the epic hike had definitely added to the commitment factor of our experience together.  I was really proud of us for pushing ourselves out of our comfort zone in a safe way, and as we sat in the Olive Garden munching on salad and breadsticks and looking out the (dark) window, we were both thankful that we weren’t still outside fighting with cacti and looking for cairns by headlamp.  This is not the first time (and I’m sure it won’t be the last) that I’m reminded that climbing is way more about the journey than the actual summit!

Originally we were hoping to get on one of the really classic looooong routes, but we learned that the short window of daylight this time of year made for some tricky logistics.  This time of year the canyons were fairly chilly, meaning that we needed routes that were in the sun for at least the morning hours, preferably longer.  The sunny  routes are on the far side of a one-way loop road that doesn’t open until 6 am, and closed at 5 pm (7 with a late permit, which we made sure to get every day “just in case.”).  The 3 hour time difference meant getting up early wasn’t a problem, but most of the classic lines are guarded by a pretty hefty approach.  By the time you factor in “travel time” and possibly waiting on other parties, you’ve got a lot to do in a little amount of light. 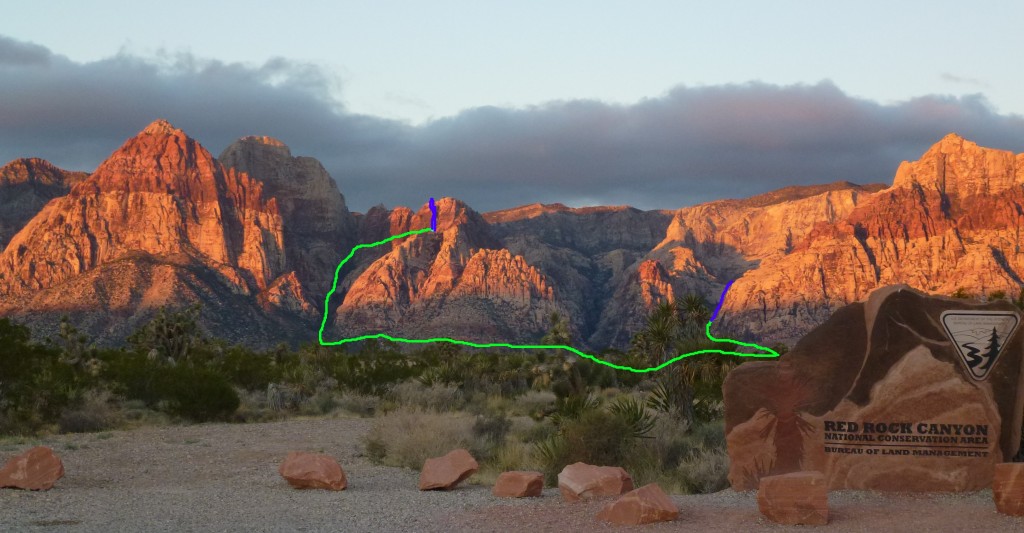 Early morning canyon view on the drive in. The green lines are for the approach (more or less), the blue line up high on the left is Armatron, the blue line on the right is Birdland.

I would definitely like to climb in Red Rock Canyon again, but another time I’d change a few things for sure.  I’d go in the spring – AFTER the time change but BEFORE it gets too hot!  I would spend all my time in the canyons (on shady routes that were too cold this time around!), and wouldn’t waste any days clipping bolts.  What I WOULDN’T change is my gear – thanks TRANGO!  🙂  Another thing I wouldn’t dream of changing is my partner – this trip confirmed that Steve is not only my favorite partner in climb, but also in life (cue “awwwww’s” from the hopeless romantics…).  Though our version of “Vegas” probably differs from the majority of visitors to the land of excess, it was everything we wanted it to be…well, maybe not EVERYTHING.  I did lose 3 dollars in video poker…

9 Responses to “A Rendezvous in Red Rock Canyon Sans Toddler”