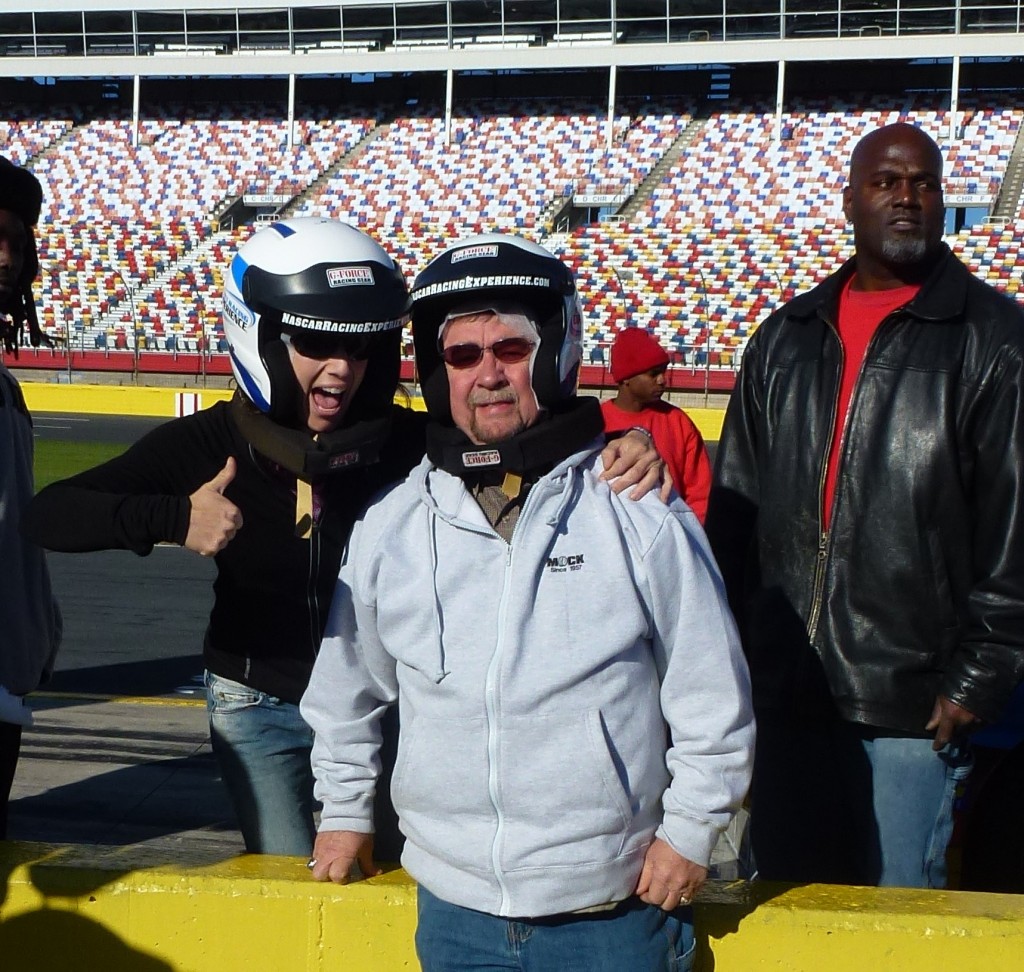 For as long as I can remember, I’ve been the type of person that values a meaningful experience more than tangible luxuries.  I’d rather have a giant birthday bash with friends than open a ton of presents.  Family vacations rank higher on the to-do list than replacing kitchen countertops.  And gift cards are always more enjoyable to spend on a shopping date with the giver.  That being said, when Cloud 9 Living introduced themselves to me as a company that offered “experiences rather than stuff,” I knew this was my kind of company.

Founded in 2005 in Boulder Colorado, Cloud 9 Living is in the business of checking off “bucket list” items – either for yourself, or for someone else.  Their theory is that memories last longer than stuff, so they offer over 1700 unique gift experiences in 43 different regions of the country – from hot air ballooning to fighter pilot rides, and everything in between.  Cool idea, huh?  Even cooler is that I got a chance to participate in one of these experiences – a “Stock Car Ride-a-long” at the Charlotte Motor Speedway for free, in exchange for an unbiased review!  But experiences are always better when they’re shared with those that you love, so it only seemed logical that I invite…my dad.  Seem random?  It’s actually not at all.  First of all, my dad has ALWAYS wanted to ride on a race track (between you and me though I’m not really sure why, as I can count on one hand the number of times he’s actually sat down and watched a NASCAR race).  Secondly, my dad and I have a long history of father/daughter experiences over the past thirty-some years.  As I mentioned in a Father’s Day post this past summer, my childhood memories of these adventures are a blur of mountains, coonskin caps, bears, and swinging bridges, and our grown-up adventures usually involve bikes and some sort of mishap.  And now I can add “race cars” to that list of memories!

Cragbaby was stoked that I got to ride in the “M n M Car.”

But the best part about this father/daughter experience is that my mom and I were able to keep it as a surprise from my dad until the day of the event!  For the past two months he has been insanely jealous, under the false impression that he and my mom were going to sit with Cragbaby at the race track while I took my victory laps.  Every phone call of late has included him asking if there was any way he would be able to ride too (to which I would always reply, “I’ve never seen a race car with a backseat…”).  So you can imagine the look on his face when we get to the race track and I took him by the arm and headed to the Rider Check-In station!  Priceless – that right there made the entire experience worthwhile!

Although I was slightly disappointed that we didn’t get to wear racing suits (they were only for the folks taking part in the “Driving School”), I must say that we looked pretty tough in our helmets and neck straps.  But it obviously affected my hearing, because I couldn’t understand a lick of the driver’s safety spiel as I climbed into the car (FYI race cars don’t have doors…).  While I was watching his lips move and nodding, a burly man secured me into my seat with a strapping system so elaborate that I had no hope of being able to get out of it on my own.  The burly man gave me an encouraging pat on the shoulder, the driver said “Here we go!”, and I gave Cragbaby a wave…and then we were off.  And I mean OFF.  I had read that each ride-a-long consisted of three laps – a warm-up lap, a race lap, and a cool-down lap.  So needless to say I was shocked that my face felt like I was riding the “Gravitron” at the very first turn. 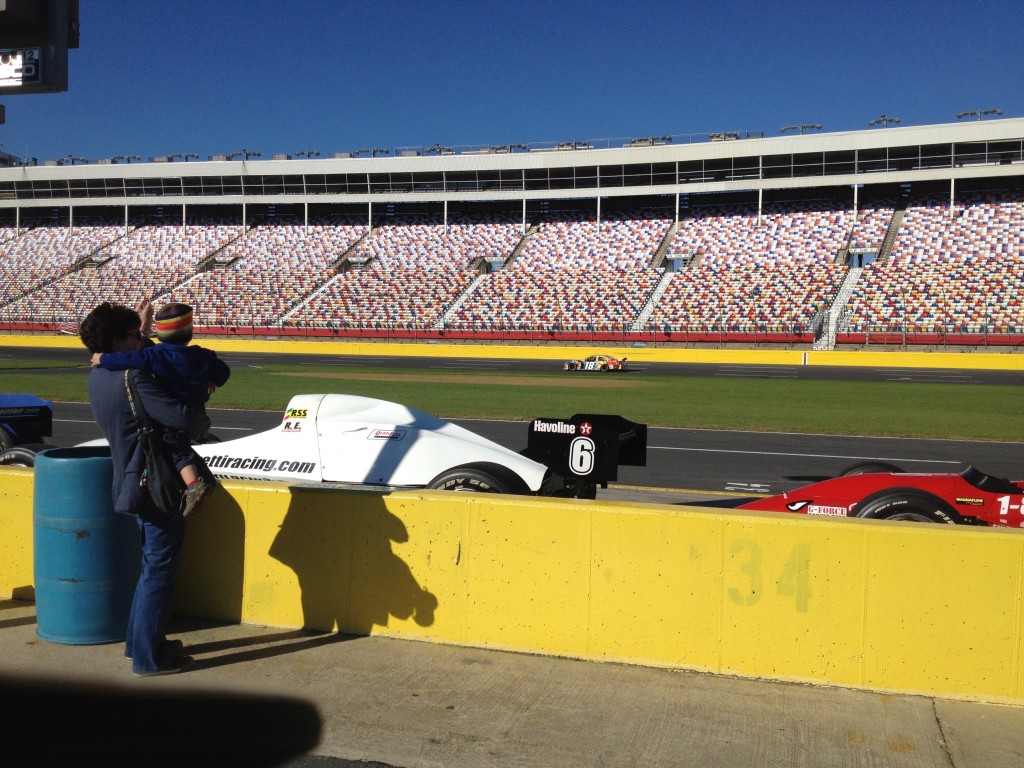 I like to think that the focus and mental toughness required in a sport like rock climbing has given me a fairly high fear threshold…but evidently something is lost in translation from rock to race track because this was a lot more intense than I was expecting.  You know that feeling when you’re at the tail end of the first big drop on a roller coaster, and you start to get that almost panicked feeling that your stomach can’t take much more (and then 2 seconds later the roller coaster starts going back up)?  That’s how I felt for pretty much the entire ride.  We screamed around each turn so fast (170 mph to be exact) that I couldn’t figure out how all 4 tires were managing to stay on the track. I found myself death-gripping the sides of the seat, and at one point I even had to close my eyes for a couple of seconds to take a deep breath.  (When I opened them, we were just as close to the side walls as we were  before…)  I’m pretty sure that the guy driving the speeding bullet we were enclosed in wasn’t stressed at all – in fact, it was probably a pretty casual day at the office for him.   As we hit the second straightaway on lap 2, I pictured all the folks I’ve taken outdoors for their first time on the rocks and realized ironically, that the level of intensity I was feeling is probably similar to what those first-timers were feeling…(and what is it they say about “Karma?”)

I would definitely say that I have a newfound respect for Nascar drivers – I can’t imagine the focus and fine motor control it takes to manuever a car that fast amongst 40 other drivers…all of whom are trying to cross the finish line first!  (Geez, and people say that CLIMBING is dangerous?!?)  Obviously, there are different strokes for different folks, but as for me, I’m far more comfortable in the vertical realm.

And my dad?  He loved every minute of it!  According to my mom he talked nonstop about it the entire way home.  And I’m pretty certain his buddies will start tuning out his play by play long about the 18th time they hear it!  Though it’s not even Thanksgiving yet, you could make a case that a part of Christmas came a little early this year for our family, especially for my dad.  I’m grateful that I had this opportunity to share with him, and I would highly recommend considering an experience gift for that hard-to-buy-for person in your family.  Poke around Cloud 9 Living’s website to see what opportunities are available in your area, and while you’re there, be sure to enter their “9 Days of Christmas” contest.  It’s running now all the way through December 23rd, and there are (you guessed it) 9 chances to win, all in the days leading up to Christmas!

You might as well enter – what have you got to lose?!?

6 Responses to “An “Experience Gift”…and the Need for Speed”