This past Sunday marked Day 3 of work on my most recent climbing project at my local crag, Crowders Mountain.  This route was one that I had picked out for my Hit List for 2o12 – The Whining (5.11d).  I chose it not only because it’s an area classic, but because it specifically plays to my weaknesses – a one-move wonder, go-go-gadget-reach style crux.  The route only officially goes at 5.11d, but the running joke is that for every inch you are under 5.8, it’s a letter grade harder.  Most are able to make the long reach by utilizing a heel/toe cam (Non-climbers: A heel/toe cam is where you wedge your foot inside a crack or opening in the rock, which takes a lot of weight off your arms as well as makes it easier to keep your body in the right position).  The vertically challenged, however, can’t reach the hold while keeping their foot wedged into the rock, and must precariously slide the foot out onto the face, requiring a lot more core and precision.  The rest of the climbing is sustained and pumpy, but on bucket holds, and probably no harder than 5.11-.

I got on this climb about a year and a half ago, shortly after moving to Charlotte;  my first crack at it did NOT go well.  I got shut down and was nowhere close to making the crux move.  I tried again a few months later, with the same result.  My intent with adding it to my Hit List for this year was that I would work on it at the beginning of the year, since that particular wall climbs best on cold, sunny days.  But a walking cast, and a need for redemption on the route that landed me in said boot put The Whining on the backburner for a bit, and before I knew it, it was far too hot to try, postponing it even further.  I didn’t get a chance to get back on it until just before Thanksgiving, at which point I was thrilled to be able to make the crux move fairly quickly, and then cruise through the rest of it, one-hanging it 3 times that day.  I figured a send was within short reach, probably on my next attempt.   But again, timing got in the way, and my next chance at the line was on my first day back from a self-imposed month-long climbing hiatus.  I was disappointed that not only was my crux beta still low percentage (even executed perfectly I was only successful in hitting the hold I needed less than 50% of the time), but my lost endurance from the time off meant the upper section felt a lot harder than it had before. 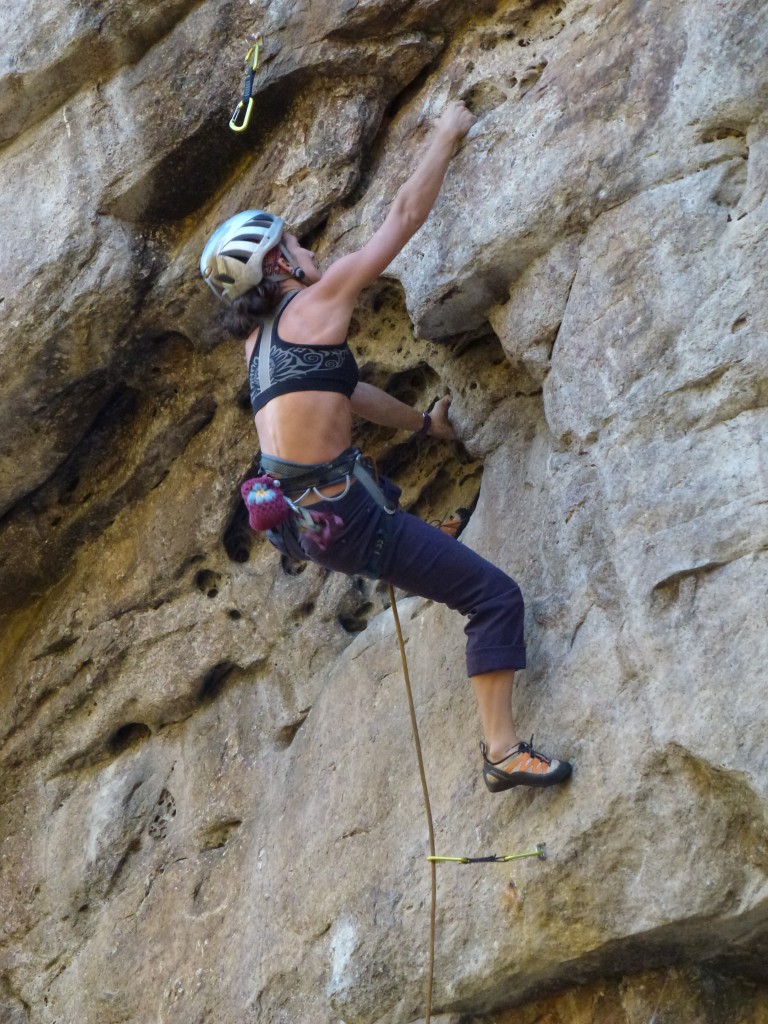 Hero holds the rest of the way!!!

No worries, I told myself.  Just bust your butt in the lead cave at the gym a few times, and all will be back to normal soon.  And that’s exactly what I did.  By my 3rd session in the gym, I felt like I’d gotten my mojo back, and even managed to send a very un-Cragmama-like route 2nd go.  The weather cooperated, and I tied in this past Sunday feeling confident that day would be the day.  My first go was ridiculously close – a couple of falls at the crux, but the rest of the climbing was smooth, dialed, and felt relaxed.  At this point I knew I wasn’t going to fall anywhere after the crux, so I decided that if I fell again, I’d just lower to the ground, rest up for a few, and go again, for efficiency’s sake.  (No need to sap my energy by going to the top every time).  But after a ridiculous number of subsequent attempts (I lost track after 6 or so), my frustrations were rising, temperatures were dropping, and my body was rebelling against doing the same repetitive movements over and over again.  Meanwhile, in between my attempts, two of my friends had sent the route – one even flashing it fairly easily.

Things just weren’t going my way, and my confidence was fizzling.  I felt self-doubt begin to creep in, and started to feel sorry for myself as I realized that day’s pre-Christmas climb was not going to end as successfully as last year’s.  But just before I let the frustration get the best of me, I decided to do something unusual – I decided to walk away.   Not out of desperation, and not because I was angry, but because I was ready to move on.  I hopped on another nearby route that I hadn’t done in over a year, and sent it with no problems.  It felt so good to do something DIFFERENT.  And ironically, I hiked out of the crag on Sunday feeling more content and satisfied than I have in a while. 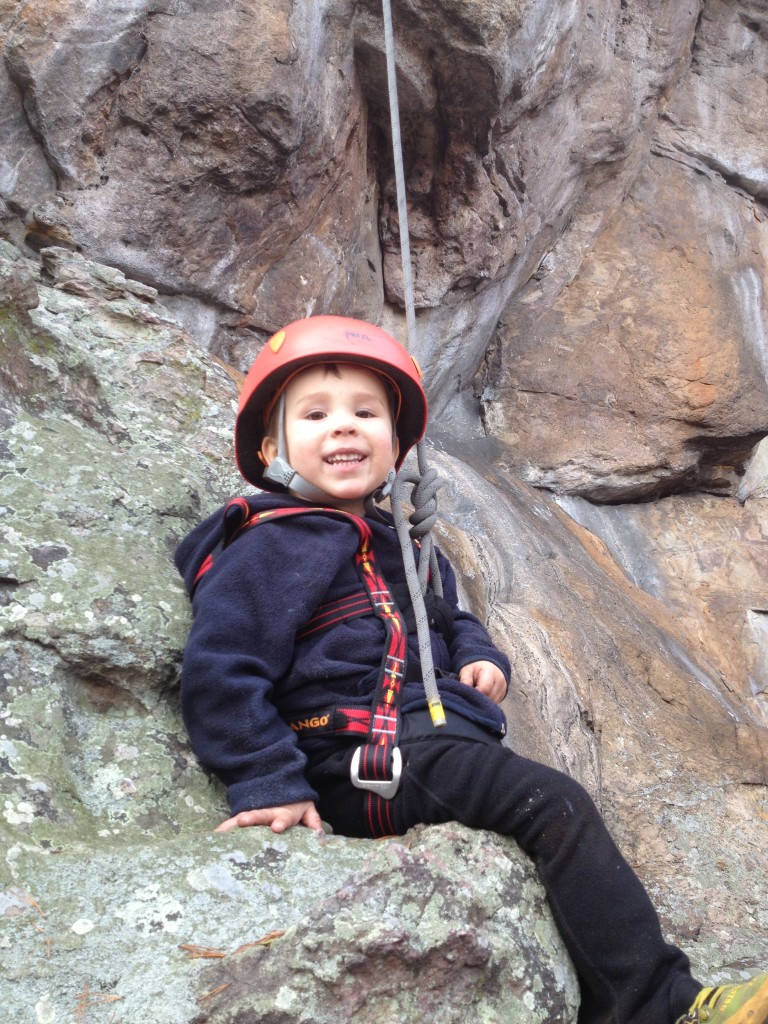 On the surface, it might seem like I’m just giving up, but I don’t see it that way.  I just all of a sudden realized that for me, The Whining is not worth all of this effort.   Some routes are –  personal challenges that I’ve made slow but steady progress on, classic routes that have required just as much mental strength as physical, or maybe just a line that’s pure joy to tie into because the movement is just so fun, or the setting is just so spectacular.  There are plenty of routes that are worth allowing yourself to get sucked into investing a lot of time and energy into.  For me, The Whining doesn’t deserve that status.  I don’t regret the time spent – but frankly, I’m tired of working that hard for one 5.11d.  Right now getting on other routes (both harder and easier) is much more appealing.

In some ways, I guess the personal insignificance of this route for me shows progress – last year at this time I only had a couple of .11d’s to my name and probably would have felt that grade warranted a lot of effort.  But a year later, routes far harder than The Whining have gone down, with most taking far fewer tries.  I’m not saying I don’t care about sending it, just that I’m not in any sort of hurry to get it done.  We may end up back at that wall soon, we may not.  And if we do, I may get on it then, or I may try something else.  It’ll happen when it’s ready to happen.  And when it does I’ll be happy…But probably not as happy as I was seeing my little  boy get his climb on!    He ropes up pretty regularly in the gym, but this past weekend was only the 2nd or 3rd time that he’s actually tied in and attempted to climb on real rock, and certainly the only time we’ve ever left the crag with a tearful Cragbaby shouting, “I NEED TO CLIMB!!!”

Has anyone else ever had to put a project on the backburner indefinitely, or maybe even bailed all together, for one reason or another?  What was your thought process?