“You can do anything you set your mind to.”

Benjamin Franklin said it first, but it’s been said millions (and probably billions) of times since then.  It’s one of those inspirational, “action phrases.”  Teachers say it to their students to motivate them to aim high, and parents whisper it to their children to encourage them to dream big.  I’m sure we’ve all heard someone say it to us at some point, and in turn, I’m sure we’ve all said it to someone else.

It’s also the phrase that immediately popped into my head when I saw this picture.  Some days C has the attention span of a hummingbird, constantly flitting from one thought to the next, never really allowing his brain (or body, for that matter) to come to a complete stop in any one place.  He might give one half-hearted glance at a task and immediately say he can’t do it.  (“I’m too tired to ______” is the phrase of choice these days…).  Then there are other days were he digs his heels in and has tunnel vision – focused only on one particular thing, which could be anything from a favorite t-shirt to a toy bulldozer.  But whatever it is, C is “all in.”

It’s on those days that I realize the power of “setting your mind” to something.  It’s more than just verbalizing a desire to do a particular thing.  It’s more than just going through the motions.  It’s being “all in,” where 99% of your thought process is devoted towards that one thing.  The object you’ve set your mind to is with you while you eat, sleep, and play.  Everything you say and do is done in the context of that one particular thing.  Sounds pretty intense because it IS (just ask that guy on the swinging monkey bars!) 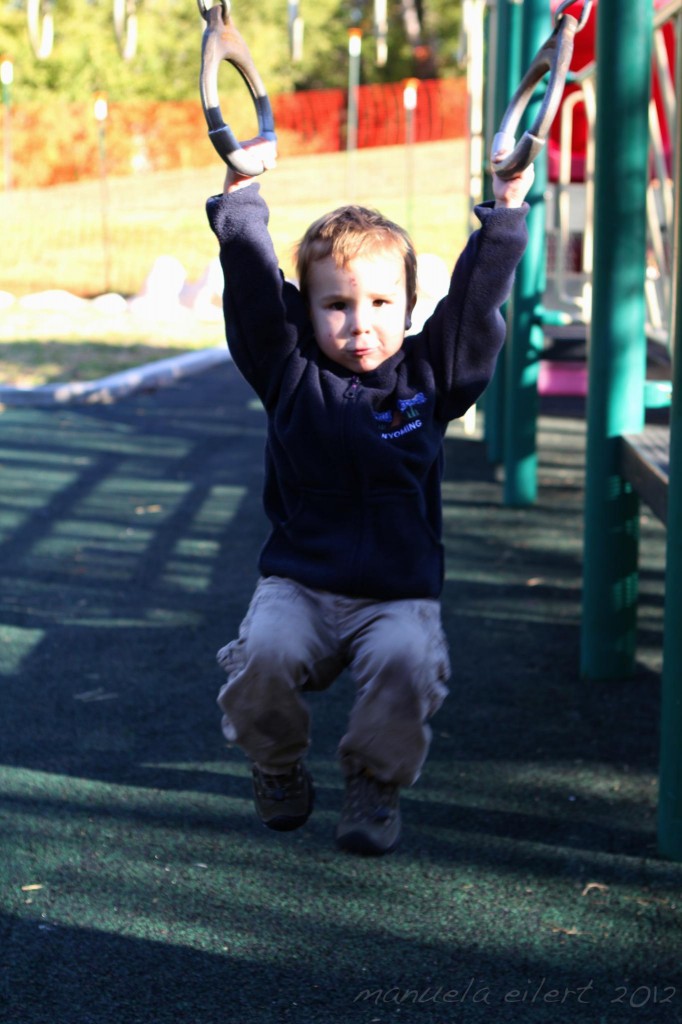 Which then begs the question – what could we all accomplish in this world if each one of us really “set our (God-given) minds” towards the things that we want?  And don’t be afraid to think big – I don’t mean short-term things like climbing goals for the year or where you want to be professionally in 5 years.  I’m not saying there’s anything wrong with things like that (if you’ve been around this site for any length of time you’ll know I’m a big fan of short-term goals!) But don’t limit it to ONLY the short-term, don’t be afraid to broaden your pespective!

Think about all the experiences I could share and the depth of relationships I would enjoy if, every morning when I woke up, I set my mind to being the best mother, wife, and friend, I could possibly be.   Of course I wouldn’t be perfect, but I’d probably be good enough to deserve a super hero cape (maybe it could be reversible as I went back and forth between roles of Super Mom and Super Wife…)

And it probably sounds cliche, but what if we all set our minds to making this world a better place?  We still probably wouldn’t always agree with each other, but we’d at least be united in our quest – and everyone knows you can accomplish a lot more when you’re not arguing.  And globally speaking, if more of us actually set our minds to it, we most definitely could make this world a better place not only for ourselves, but also for our children and the generations after them.

Here’s my resolution – the next time I’m tempted to procrastinate on my goals or make up excuses for why I can’t do something (whether it’s something seemingly small and unimportant, or something epic and larger than life), I’m going to picture my sweet little Cragbaby’s face of unwavering determination and focus on those swinging monkey bars.  If he can set his mind to something, then so can I!

What things are you hoping to “set your mind” to this coming year?

2 Responses to “Setting Your Mind: From a Toddler’s Perspective”