Back in my pre-kiddo days, I was an elementary school teacher, and was accustomed to having a lot of time off over the holidays.  My hubby is blessed to get a decent amount of  vacation days at work, so he grew accustomed to taking off the same days that I had for Winter Break.  Now that I’m not working outside of the home anymore, he’s STILL accustomed to getting lots of time off at Christmas, so he saves up enough vacation days every year to take a full two weeks off over Christmas/New Year’s.  That means we have plenty of time for multiple rounds of Christmas with all but the farthest away family members, as well as an opportunity to enjoy the first few perfect friction days of the season – which down here in the Southeast, means wrasslin’ some pebbles! (Or bouldering, for the non-climbers…) 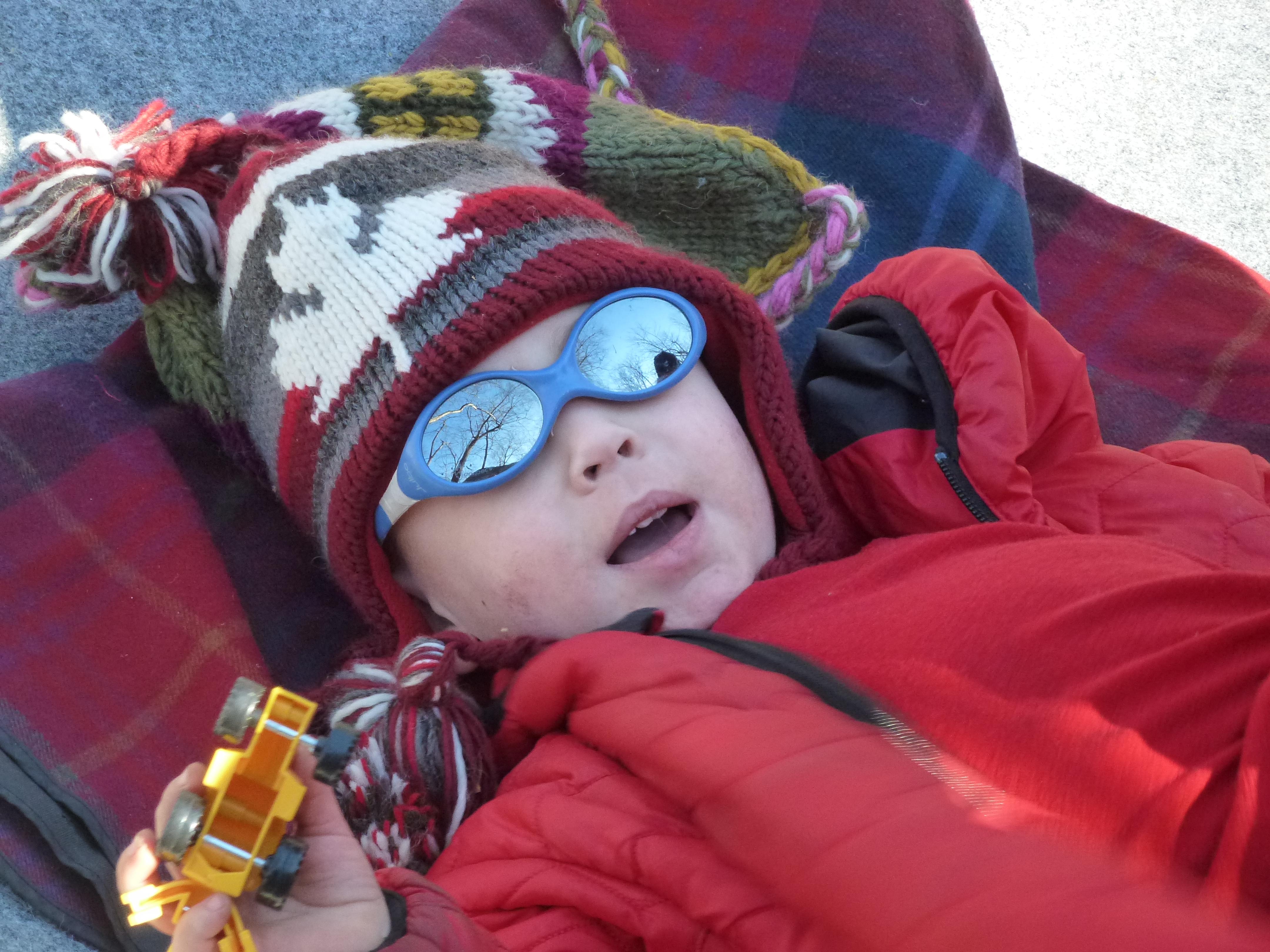 Though physical remnants from my ankle injury last February are now nothing more than an occasional achy twinge on a rainy day, the mental consequences still rear their ugly head now and again, especially when I’m bouldering (which is ironic, since the injury occurred while I was on a rope…)  But just recently I got a lot of peace of mind from a positive MRI report (though there is some damage, it’s not the kind that should be cause for concern).  Not that I’m all of a sudden going to start projecting V7 highballs or anything.  I’m just psyched to get more comfortable dropping onto a pad from a reasonable height again, and hopefully gain some strength and power that will translate to a rope this spring.

Anyway, despite the rather uncooperative weather (75% of the days we had available were filled with rain, gray clouds, or gusty winds…) we managed to get out on 4 different occasions…

RUMBLING BALD:  Conditions were splitter – high of 45 and brilliant sun on a south-facing boulderfield!  Now that we’re in Charlotte, this world-class destination (for bouldering as well as roped climbing) is an easy day trip, so we will certainly be taking advantage of that this season.  Since we’d only been there one other time before and it was more than 2 years ago, we probably did more hiking around getting our bearings than we actually did climbing, but it was a great day nonetheless.  I was psyched to send an unnamed V3 on the Trailside boulder that gave me hell the last time I was on it..  It’s just a couple of hard moves, but the first one is pretty long and powerful, and it felt good to send it without too much flailing this time around.  Other noteworthy mentions were a couple of really nice slab V3’s on Boulder #36 – they were the definition of fun!  After running into some friends who were hiking out from a day of roping up, we finished our day at the Cave Boulder, where my highlight of the day was sending my first post-injury V5!  (Into be fair, it was a one-move wonder sit down start that led into a soft V3, but I’ll take it!)

DIXON:  This ended up just being a half day for us, due to too-cold conditions.  The sun was shining off and on, but never seemed to shine anywhere in the vicinity of where we were.  The combination of frigid temps and excessively sharp rock on fingertips that were already halfway shredded from the day before was not a good one, and we bailed at lunchtime.  However, the one silver lining on the day was that it was the first time we had ever climbed outdoors as a family of three – and it was a big success!  C was a champ, and did a good job of staying off the pads while someone was climbing.  He was also very gracious (for the most part…) about “sharing” spotters so that we all had a chance to climb safely.  The verdict?  Although more is definitely merrier when it comes to bouldering, a casual day at the boulderfield is definitely possible with just us now.  I still we need to have a third person with us on C duty when we are roping up, but it’s nice to know that we can in fact fly solo every now and then for a short day if we need to. 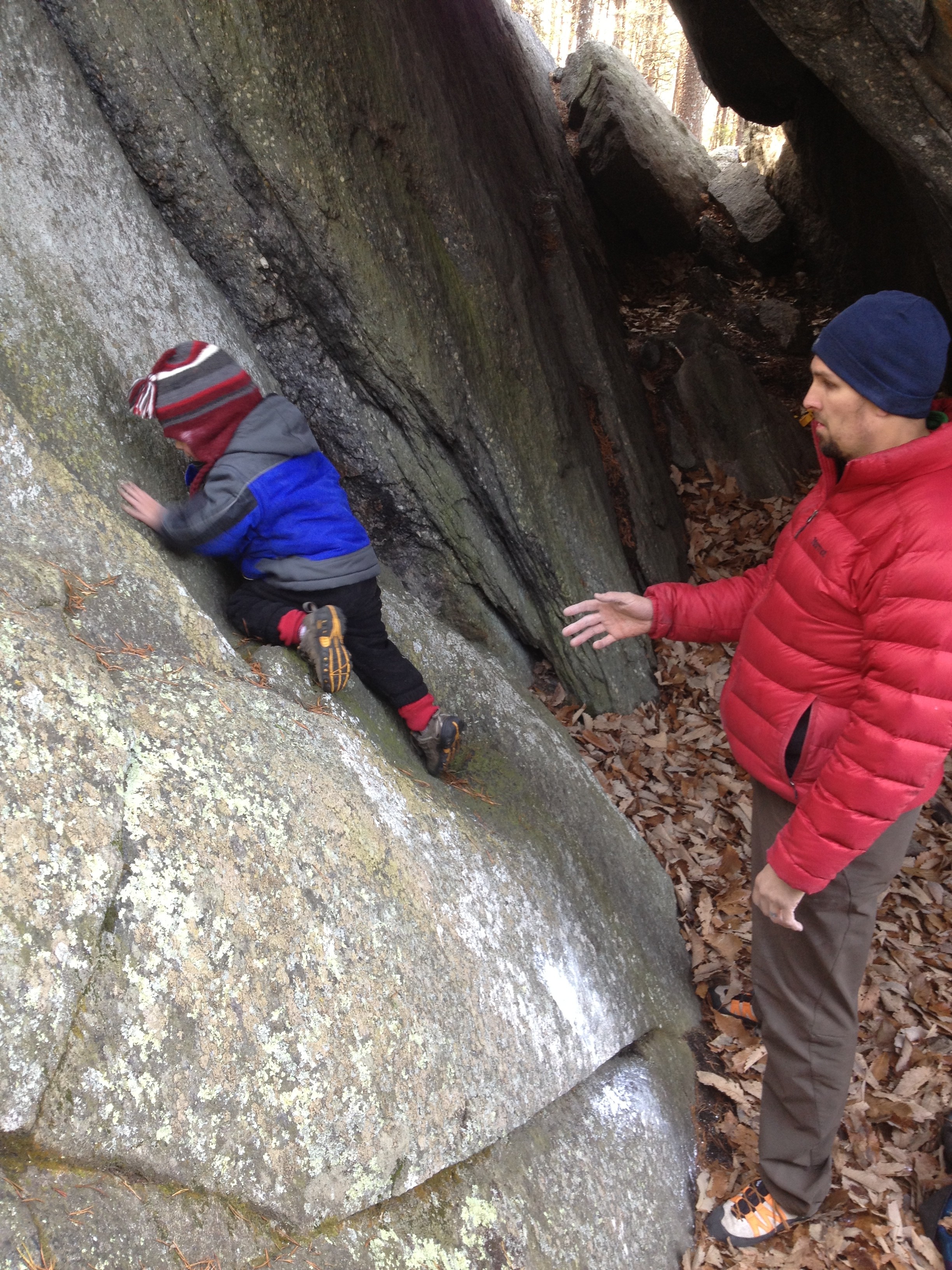 Cragbaby’s turn to get his slab skills on at Dixon.

CROWDERS:  We were able to get out on a rope for Steve’s last official day of Holiday Vacay with our friend Eddy.  It was a short, but profitable day for all of us.  Eddy is on the last leg of a quest to send every route at the Main Wall of Crowders (more on that later…), and he was able to tick off 2 more lines.  Steve sent Desperately Seeking Juggage (5.11b), and I worked out all the moves on Silence the Critics (5.12b).  I’m confident it will go next time I’m out that way.  And Cragbaby hiked all the way out from Red Wall to the summit, and down the Backside Trail all the way til just before the last turn!  It took twice as long, but was twice as fun! 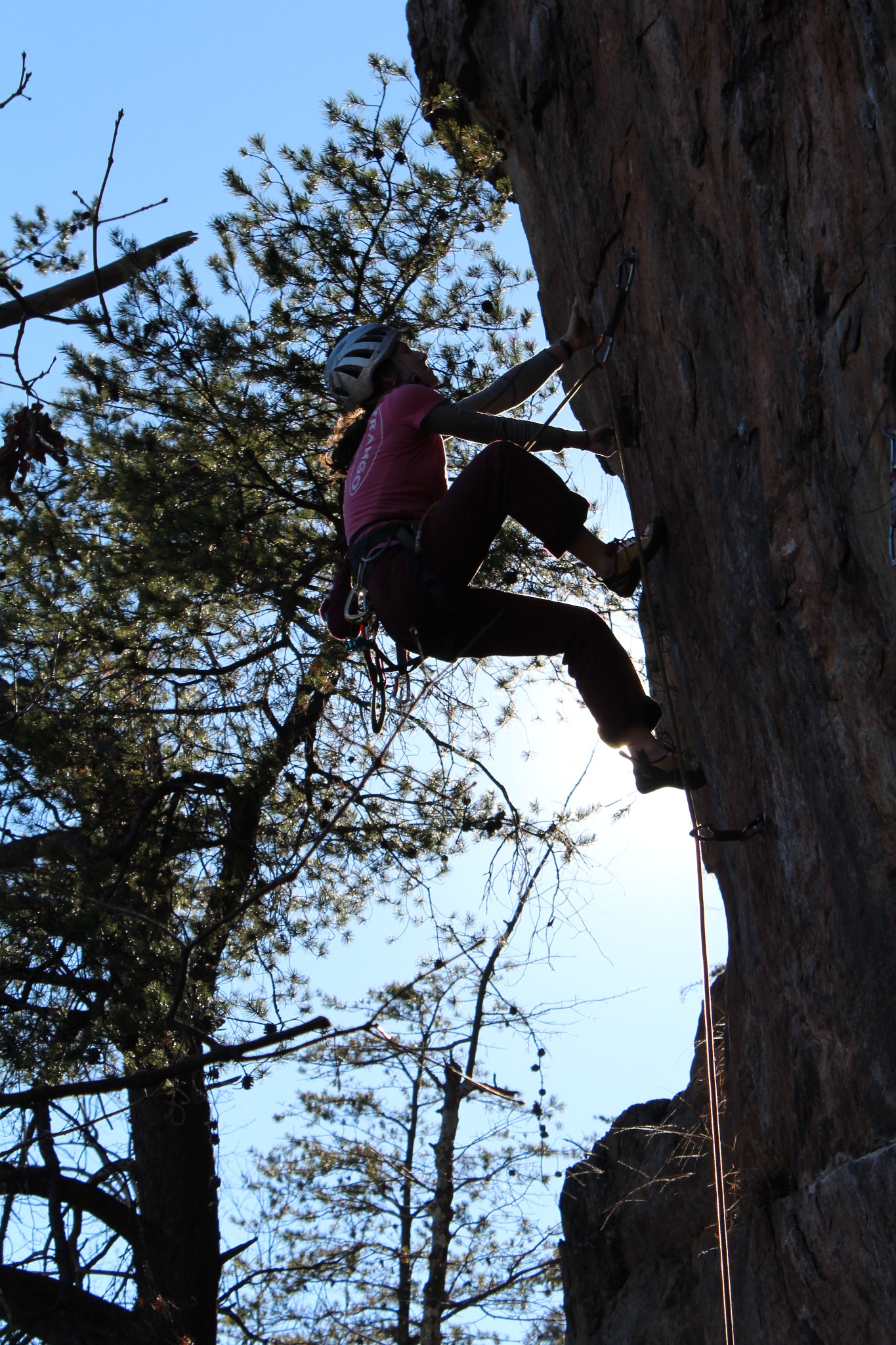 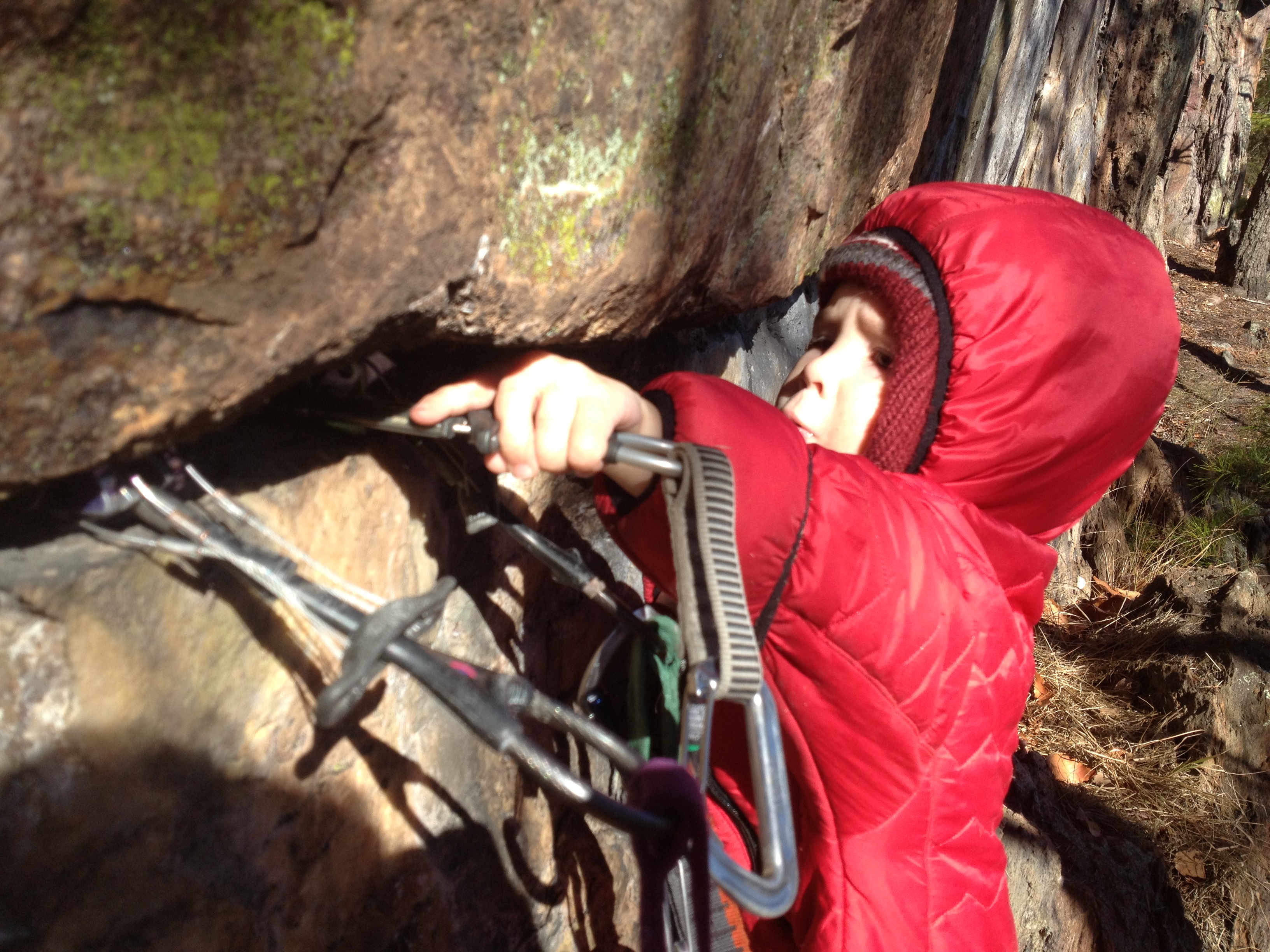 MOORE’S:  Of all the times we’ve climbed at Moore’s Wall, we’ve always walked right by the boulderfield on our way to rope up.  But armed with a new guidebook and an army of pads, we descended upon the boulders in full force.  To be honest, for the first hour (at least) I thought the day was going to be a bust.  I couldn’t stop shivering, and every time I touched the rock it felt like I was gutting a snowman.  (But apparently everyone else was fine, including Cragbaby whose hands were somehow toasty warm the whole time?!?)  Maybe I’m just a pansy when it  comes to the cold…Anyway, by lunchtime it had warmed up substantially, and I remembered how to climb again.  Notable sends include Men Are From Moore’s (V3), which I would have said felt pretty stout for the grade until I got on the burly and scrappy Donkey Kong (V3), which felt at least a grade harder and a took mighty amount of effort to send.  Maybe I’m just a pansy when it comes to bouldering.  😉  We rounded out the day on Scarier than Larry (V3), which, although tall with a fairly high crux, was pretty straightforward and felt surprisingly casual for me.  C had a blast playing with his newfound friend A, and was once again a happy hiker, this time ALL the way back to the car, even through some pretty rough and tumble sections on the trail. 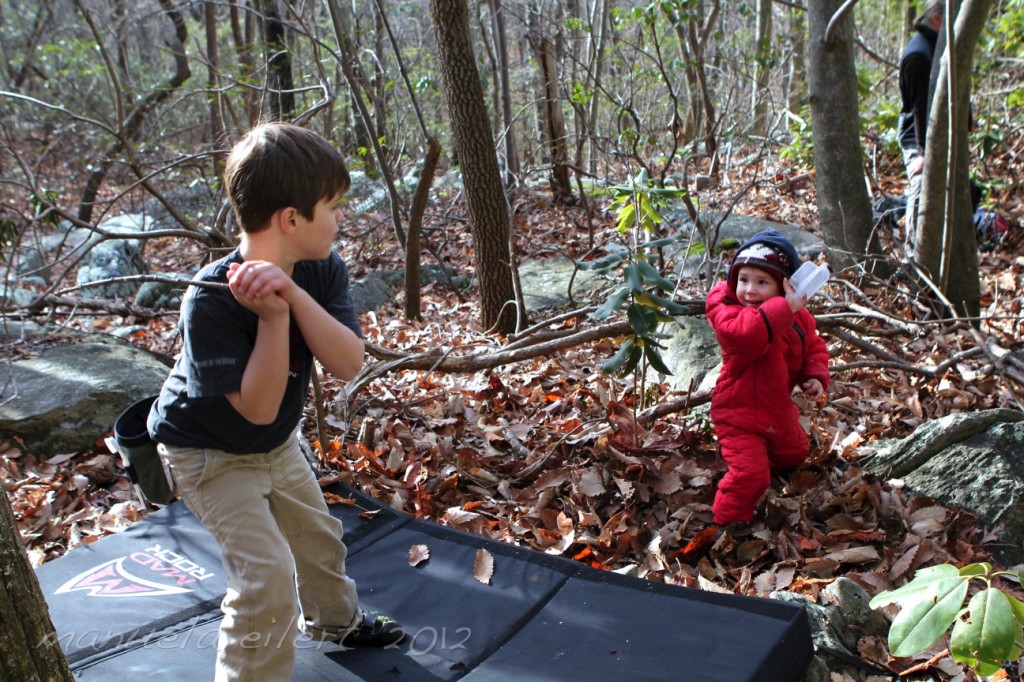 Baseball with a Tupperware container?!? Add a new one on the “cragtivity” list…

All in all, I’d say it was a pretty successful holiday!  Bouldering season got off to a great start, and I’ve already got a route on deck for the next warm day (hopefully it’ll be relatively soon, before I forget all the beta!)  C and I loved having the Daddoo around every day, and it was hard to let him go back to work this week!  What about everyone else – how did you all recreate and enjoy the outdoors as a family over the holidays? 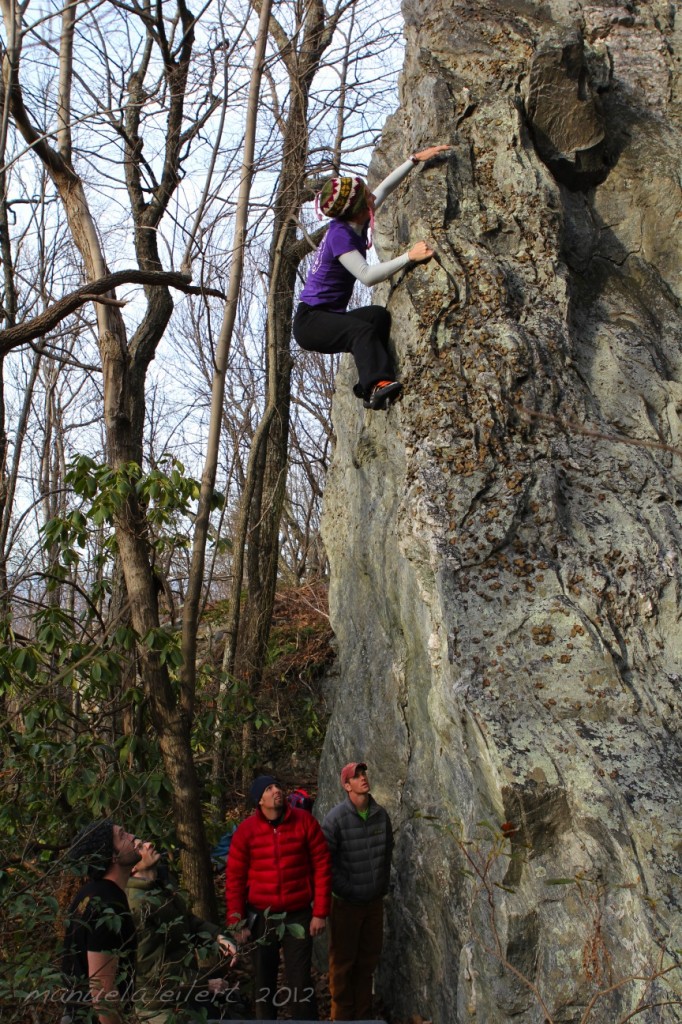 Scarier Than Larry (V3). And it’s tall… but not anywhere close to as tall as my dramatic photographer makes it appear 😉

3 Responses to “A Little Bit of Holiday Crankin’”