“I have a dream that one day bolt-clippers, boulderers, and tradsters will come together on my birthday and climb and eat pizza,”
– The Crag Daddoo 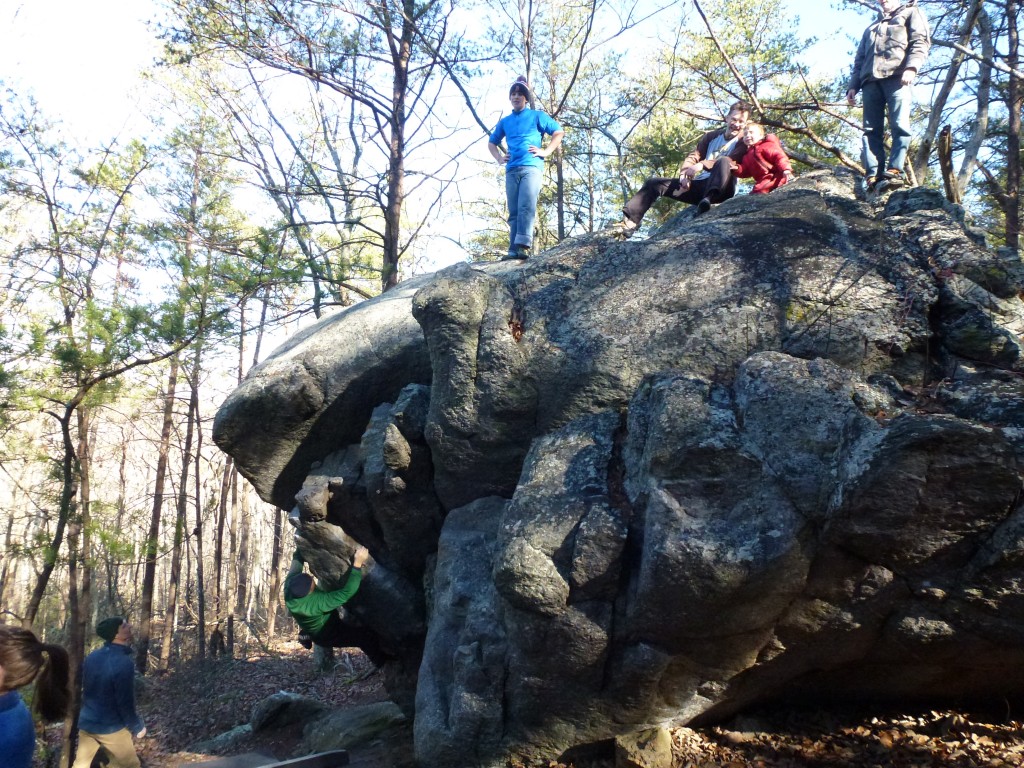 Well, maybe those weren’t his EXACT words, but in the spirit of the MLK holiday weekend, it was a reasonable paraphrase…and with that in mind we invited our friends from far and wide to celebrate Steve’s birthday this past weekend.  And we couldn’t have asked for more perfect weather – highs in the 50’s without a cloud in the sky!

DIXON:  We kicked the 3 day weekend off on Saturday by converging at the Dixon School Road Boulderfield with about 20 people and almost as many crash pads.  Usually trips to Dixon are rather lackluster – we always get on the same problems, and I send the ones I always send, and thrash around on the ones I can’t.  But having an army of crashpads and spotters opened up more possibilities, so in addition to the old standby’s I was able to tick two problems I’d never been on before – Lucifer (V4) and Earthquake (V3).  I even managed to advance one move farther on an off and on project – Venom (V5).  It sounds small but this was exciting as every time I’ve worked on it, I’ve gotten shut down on a barn-door inducing move one hold from the top.  This time I was able to initiate the transition my weight in the right direction with enough control to take off my right hand and move it up.  Unfortunately at the start there’s a sharp left hand crimp that bites back (hence the name), which only allows for a few attempts per session before poking a hole through my fingertip, but now I’ve got renewed motivation to get back to it sooner rather than later! 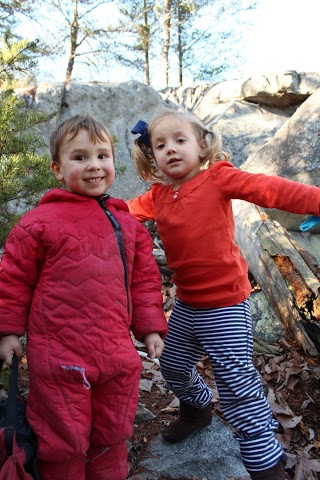 C and his new friend 😉

CROWDERS:  A crush-fest by day and a birthday party by night left the Crag-Daddoo in need of a rest day, so after church he hung out with C while I took our out of town guest to Crowders for the afternoon.  My only goal for the day was to redpoint Silence the Critics (5.12b).   It’s pretty sequential, and very unique compared to other routes at Crowders.  It’s got horrible feet, core-intensive movement, and a scary clip, and ever since I got on it a couple of weeks ago I’d been chomping at the bit to get back to it before I forgot my beta.  Since I’d worked all the moves out before, I felt really solid and the redpoint came pretty easily, and it was a great confident boost since I hadn’t sent anything hard since my final 5.12 of 2012.  With the main goal crossed off and several more hours left in the afternoon we hopped on over to the Trundlesauras area and picked off the handful of 5.10 mixed lines one by one.  I’d been meaning to do this for a while now to compare difficulty, as I would like to include letter grades for these lines in the upcoming guidebook rather than just 5.10, which is historically how most have been documented.  (That being said, if there are any local readers that have done the Trundle lines, feel free to weigh in with your opinion in the comment section or just email me!  The more consensus, the better!)  Unfortunately I’ve got no pictures from this day – there were just two of us, and none of the routes we did were casual enough for “belayer pictures.” 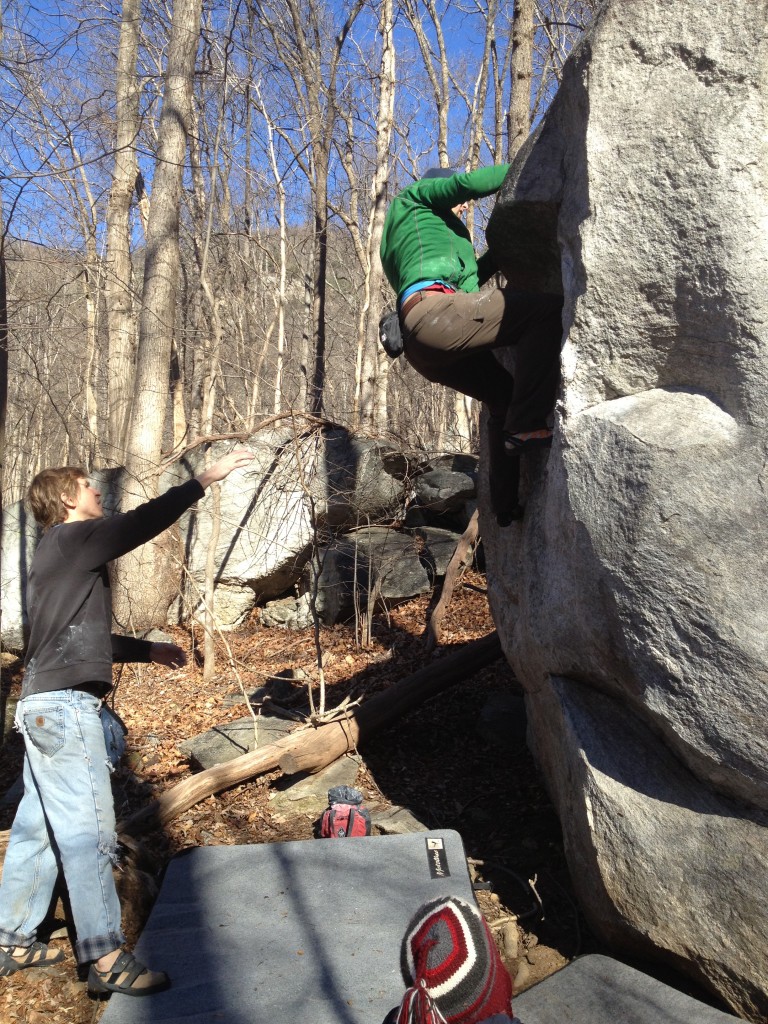 Steve topping out on an unnamed V4 in the Hull Area

RUMBLING BALD:  Monday was the only one this weekend where we technically ventured farther than local rock, although I guess I would still consider anything under 2 hours to be local.  A third day on meant spirits were willing but flesh was getting weaker and weaker by the hour, so we kept the day fairly casual – getting mostly on easier problems we  could onsight, and not spending too much time on problems we couldn’t.  However I did manage to hop on the send train for a funky (and unnamed) V4 in the Hull Area (boulder #27 in the guide).  We then worked our way to the classic Brevard Fault (V2), stopping to hit a couple of other V1’s and V2’s along the way.  The coolest line of the day was the Unnamed V4 on the Brevard boulder – a traverse along a rising finger crack to a horn, followed by a very unique (and sketchy) “double mantle” move of sorts (throw a heel and press up to another, farther away rail, then mantle again to top out.)  I made it to the first rail twice, where I got my heel up and promptly dropped off, unable to commit to the top out.  This  confirmed what I already knew about my pansy tendencies involving mantles high off the ground (somehow they always seem easier at 10 feet?!?)  But I’m secure in my fears at least – a month ago I was just starting to get back into bouldering after my ankle injury, and ridiculously scared of everything, so this is progress.  Maybe by the end of the season I’ll feel confident enough to tackle it again…or not, we’ll see.  🙂

I’m not sure we’ve ever climbed 3 days in a row in entirely different places like that before, and it was a fun and rewarding strategy.  The combo of boulder/rope up/boulder was a good idea.  Our fingertips were shredded by early afternoon on the last day, but we drove home happy and satisfied with the weekend’s events.  My new “Try Hard” strategy for making long reaches (more on that later) has been quite successful already, which has in turn increased my confidence while I’m climbing (which in turn makes me climb better).  It’s starting to look like it’s a good thing we got out as much as we did, because so far this week our 50 degree highs have been replaced with temps in the 30’s, with a wintry mix even predicted for Friday (who knows, maybe we’ll even get to take out that sled…)