Well, another year has come and gone, which means another Hit List has drawn to a close.  This was the second time I’ve put my year-long goals out there in cyber space (for 2011 Hit List click here), and once again, it was a wild ride, with plenty of bumps (and bruises) along the way!  After an unexpected injury started the year off on the “wrong foot” (sorry, couldn’t help myself…), I found a lot of my mental battles this year revolved around fear.  Fear in trusting my ankle again, fear in getting my lead head back, along with an unexpected one that kept creeping up – fear of failure.  I mentioned it in a previous post, but I learned that along with the many positives of goal-setting (increased psych, motivation, and focus), there are a few distinct negatives – namely, pressure to succeed.  Because of my ankle injury in February, I was in essence “starting” on my goals in April, which meant that I felt like I was forever playing catch-up.  Several times I questioned whether or not I had bitten off more than I could chew with my 2012 goals. 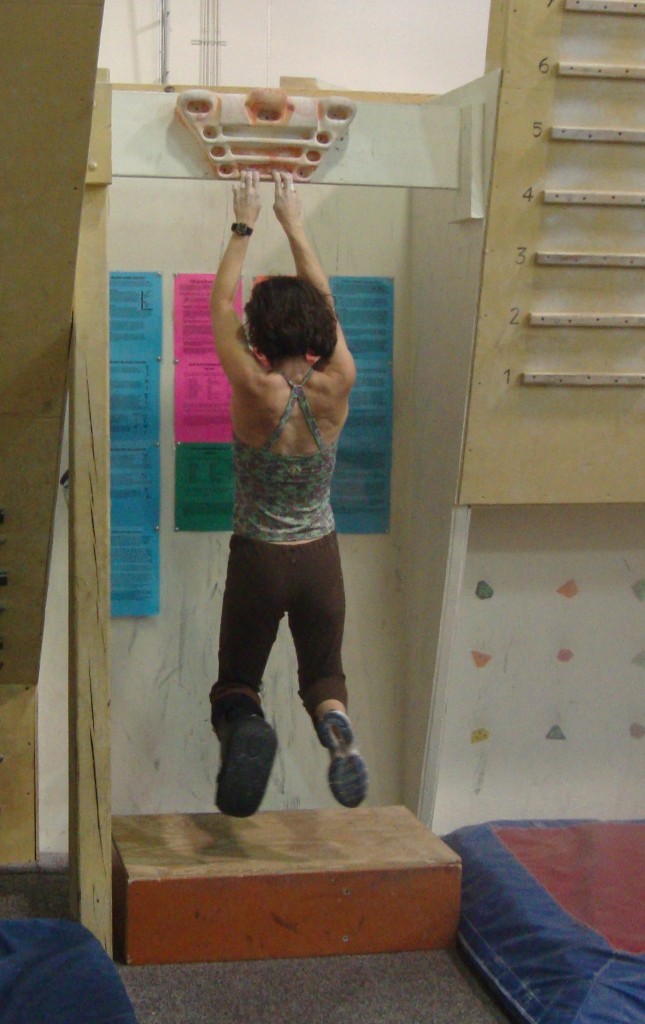 First forays on a hangboard back in February in my boot.

Being stuck in a boot  lit a fire under me in regards to training since that’s pretty much all I could do.  Thankfully I had a lot of success with it, and continued to do some sport-specific training throughout the year.  I experimented with hangboard and HIT Strip cycles, along with some specific bouldering/route climbing circuits that targeted certain weaknesses – namely slopers, lock-offs, and steep wall endurance.

9.  The Whining (5.11d, Hidden Wall, NC) –  This climb is at a local area that climbs best in cold weather, so it was intended to be one of the first routes of the year to tick off.  But due to my ankle injury and other unforeseen circumstances,  I actually didn’t get a chance to get on it this year until Thanksgiving.  I finally was able to do the height-dependent crux move with some beta that proved to be pretty low percentage (for me anyway), but after 2 frustrating weekends in a row, I decided to put this one on the backburner and save it for another time.  Excuses, excuses?  Maybe.  But here’s my case. 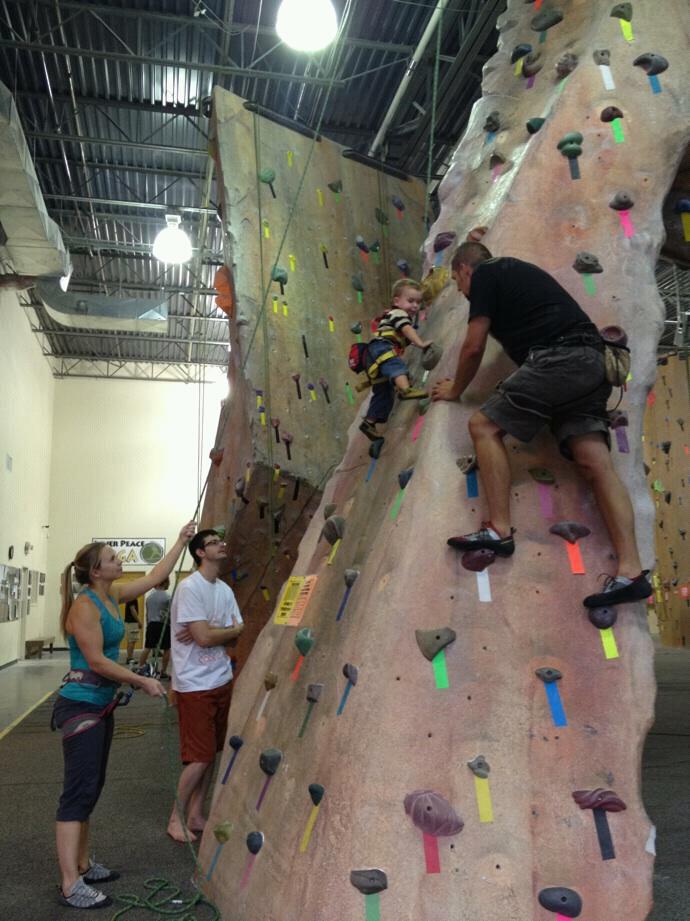 Cragbaby pulling on some plastic

– No one can argue that Cragbaby hasn’t done his fair share of crag-hopping in his not-quite-three years of life thus far.  But at the start of this year, there were still a few local areas that C hadn’t been to, and a whole host of places still on mom and dad’s bucket list.  Over the past twelve months we managed to get C to seven new areas.  Two were old pre-kiddo haunts (Moore’s Wall, The Dump), three were new to all of us from our Wild West Adventure this summer, and two were day trips to Western NC (also new to all of us).

This was more of a prediction rather than a goal, as Steve and I have both agreed not to be those obnoxious pushy parents that try to live vicariously through their kids.  But Cragbaby is quickly proving that he’s just as much of a gear junkie as his parents, so he wasn’t about to let all that shiny new climbing gear he got for Christmas last year go to waste!  He made good use of his climbing shoes and chalkbag pretty much everywhere we went.  Most of his roped explorations were done at the climbing gym, although recently he’s gotten psyched about tying in outdoors, especially after watching a big boy climb (peer pressure isn’t always bad!) 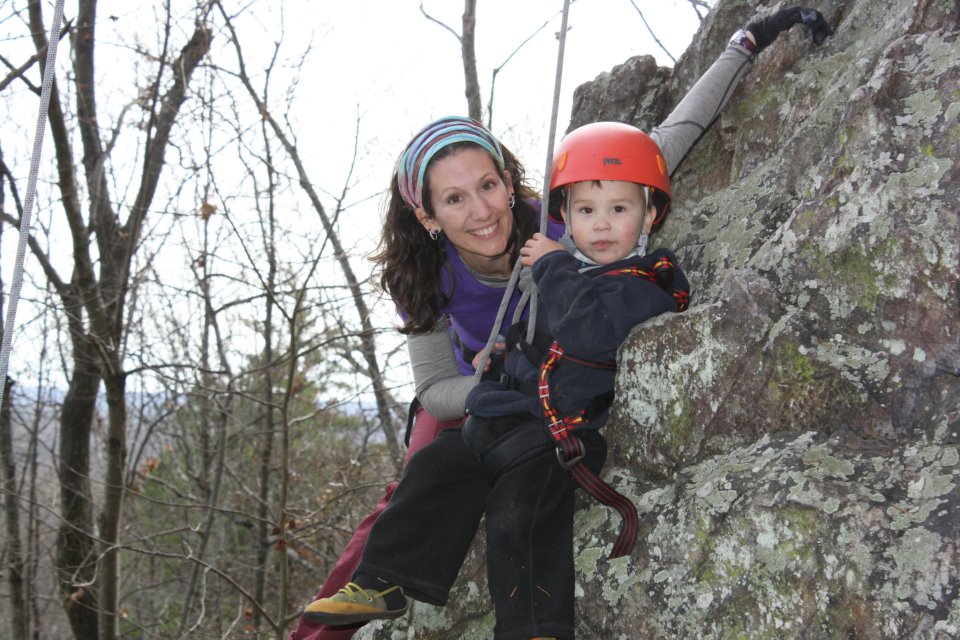 6.  Get Established at V5 – The logistics of this goal came too little too late to be able to cross it off.  I was in my ankle boot for the best friction temps of the year, and by the time I dusted my crash pad off again this fall I was in no mental shape to push my physical limits.   But after some sunny holiday bouldering at the tail end of the year (as well as a positive MRI report from my ortho!), I’m starting to gain more and more confidence.  I even managed to successfully snag my first post-fracture V5!  In the interest of full disclosure, it was a sit-down-start variation to a V3, but it’s a step in the right direction!

Out of all of my goals for this year, this is the one I worked the hardest for, and was therefore the most exciting to cross off!  A couple of them were one-move wonders, some were local rites of passage, and a few of them were world class lines, but the journey of crossing them off one by one was priceless! (Here’s the specifics, if you’re interested…) 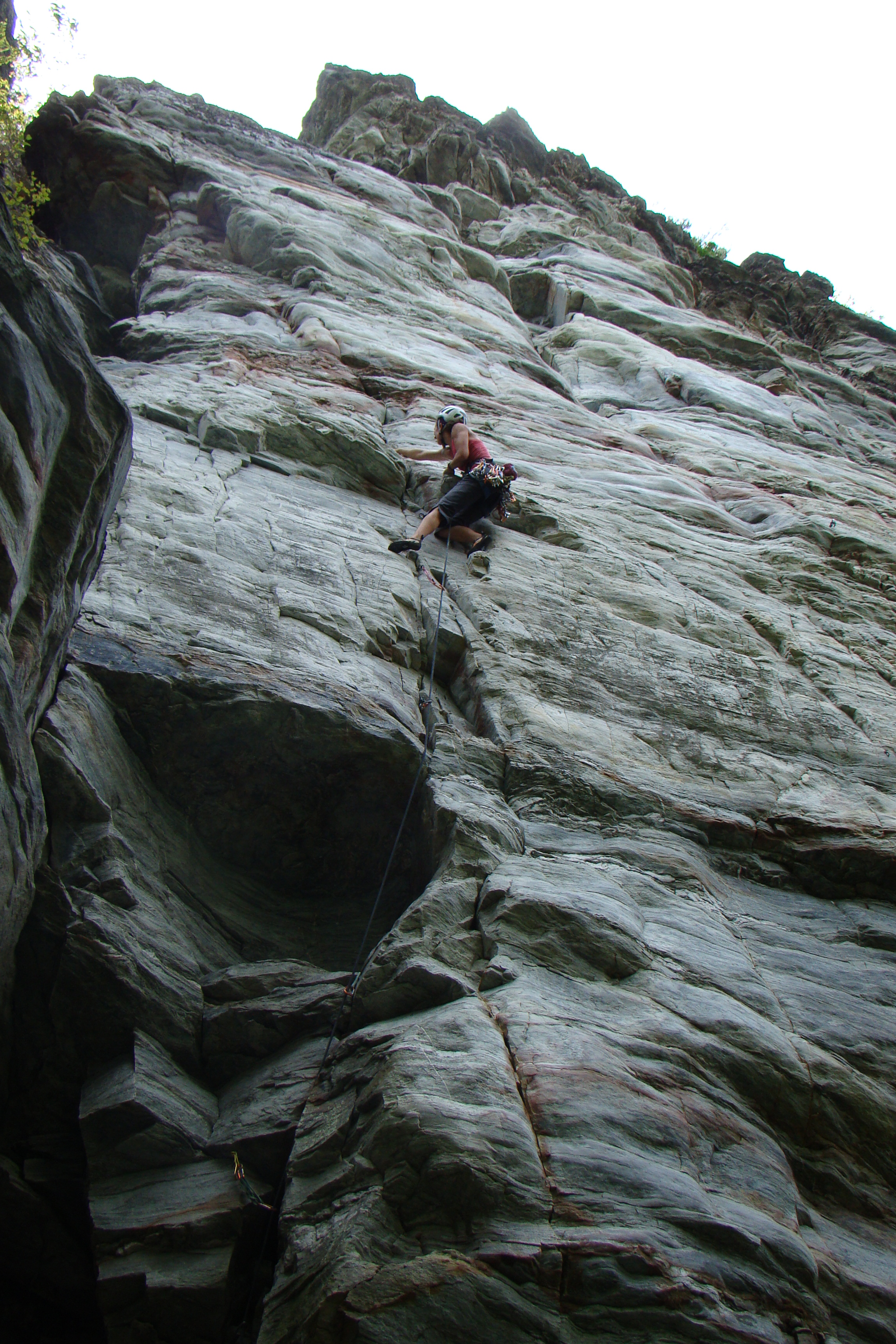 – I can’t say enough about how bad ass this route is.  After paying my dues with two 2 big whippers on what’s known as the “most whipped upon bolt in the Gorge” I sent it 3rd go on a sunny day in June.  This day may have been my favorite climbing days of the year, since the hubster also sent his project that very same day, just a few routes down from this one, in an equally epic style!

– Happy Mother’s Day to me!  Best gift ever after flailing repeatedly on it the summer before…It’s amazing what a year will do!

Although I still clipped bolts more than I plugged gear this year, I started working on a challenging gear project that will hopefully help me take my gear climbing to another level – Mighty Mouse (5.11d), at Moore’s Wall.  I also had the opportunity to take my gear climbing to a “higher” level in Red Rock Canyon just before Thanksgiving, when Steve and I got our multi-pitch on sans Cragbaby.

1.  Finish Guidebook – Well I can’t exactly cross it off the list just yet, but the bulk of my work is done.  I wrapped up all the writing except for a few final revision tweaks by the end of the summer, and I’ve been helping out with pictures and topos ever since.  Never having done this before, I have no idea how long the rest of the project will take, but my hope is that I’ll have a book in my hands some time during the first half of 2013.

Though my year was definitely littered with a few painful and frustrating moments, the magical ones where everything just fell into place more than made up for the other ones.  But I can honestly say that I’m thankful for the bad moments along with the good, as they not only helped to shape me in the smaller picture as a climber, but also in the bigger picture as a wife, mother, and friend. What will 2013 bring by way of goals?  Still working on that one, although the actual “list” may look a little bit different this year, so you’ll have to stay tuned.  In the mean time, now’s the time to brag on yourself – what goals did you accomplish this year?  (And don’t hold back – lay it all out there so we can all cyber cheer 🙂 )