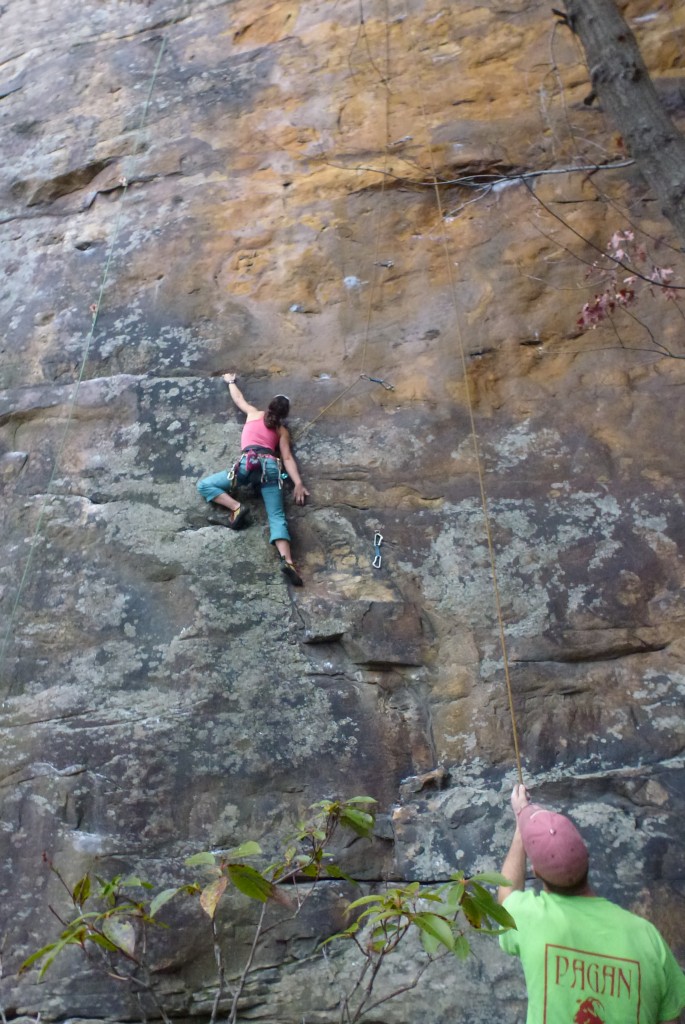 The cool thing about living in the Southeast is that rock climbing can be a year round endeavor.  In fact, some south-facing, friction climbing areas are pretty much only good in the winter (Stone Mountain, Rumbling Bald, and the Asheboro Boulderfield come to mind).  If the sun is shining and the wind is calm, you can have a very pleasant day with relatively warm rock even with high temps in the low 40’s.  But despite the abundance of winter climbing opportunities, our family always makes a definitive shift into “cold weather climbing mode.”  We spend more time jumping down onto crash pads than tying into a rope.  The short days make for less longer excursions and more quickie local sessions.  We get started later while we wait for the rock to heat up, and we end earlier in hopes of making it back to the car before dark.  But most notably, we say good-bye to our home away from home, aka the New River Gorge, until some time around March…but not this year!

Due to a freakishly warm spell that pushed daytime temps to almost 70, we found ourselves in a gear-laden car on that familiar drive up I-77 on Friday afternoon.  “It’s dark outside!” Cragbaby noted within an hour of driving, which felt odd to us all, considering that in the summer months we can make it there before sunset so long as we don’t hit too much traffic.  It also felt odd leaving our jackets in the car on Saturday morning when we hiked in – in fact I think everyone brought them down to the cliff anyway “just in case.” 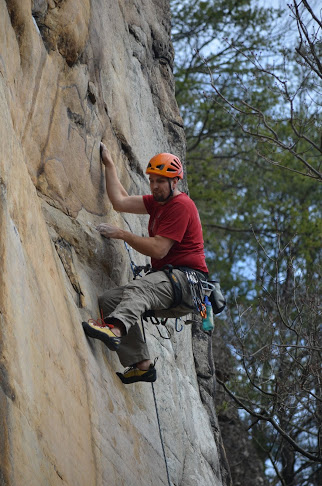 This weekend the Crag-Dad climbed harder than I’ve ever seen him climb! 🙂 Here’s Flash Point (5.11d)

Our crew had plans to hike in to Endless Wall via the Fern Point ladders and eventually work our way to Idol Point, but when we saw all the wet rock on the hike in, we realized that we couldn’t afford to be picky.  Even though the area had seen a lot of rain in recent weeks, we were banking on the fact that Endless would be dry because of it’s sunny and exposed position in the gorge.  What we hadn’t factored in, however, was the fact that the sudden burst of warmth had caused a remarkable amount of ice melt as well as condensation on the previously frigid rock.  Routes that are notorious for staying dry in the worst of downpours were soaked and completely unclimbable.  Just when we were starting to wonder whether we should have stayed local, we found dry rock.

I’ll be honest, day 1 was a pretty frustrating one for me.  Let me back up.  The New is notorious for routes with stopper cruxes involving long reaches.  While other areas, such as the Red River Gorge, tend to always have smaller features for us shorties to extend our reach by bumping a foot up or by using an intermediate hand hold, the New usually has comparatively great holds with nothing in between them.  (There’s a reason why all the beastly kid phenoms choose the Red over the New, and it’s NOT because of the rock quality!)  But despite the occasional frustrations, I’ve always loved the New, and Endless Wall in particular because it favors good footwork and technical skills over brute strength.

However, as I’ve started to push myself on more difficult climbs, I’m finding that these “reach issues” are popping up more and more.  I don’t want to play the “short person card,” as I know plenty of female climbers that are far shorter and climb far harder than me, but it’s easy to get into that mode when I’m climbing with a bunch of guys.  I think a more accurate and honest assessment is that my problems are related to movement.  When I first started breaking into 5.12 I had to climb very aggressively to make the moves.  As I’ve gotten stronger I’ve been able to lock off harder and reach holds that previously would have required dynamic movement.  (By nature I’m not a very aggressive climber (which is probably why I can’t boulder very hard), and always tend to choose very static movements unless I consciously tell myself to move with momentum.  Now that I’m pushing myself on even harder terrain, I’m realizing that I’m going to get back into “aggro mode” and use a combination of strength, timing, and coordination in order to make some of these longer reaches. 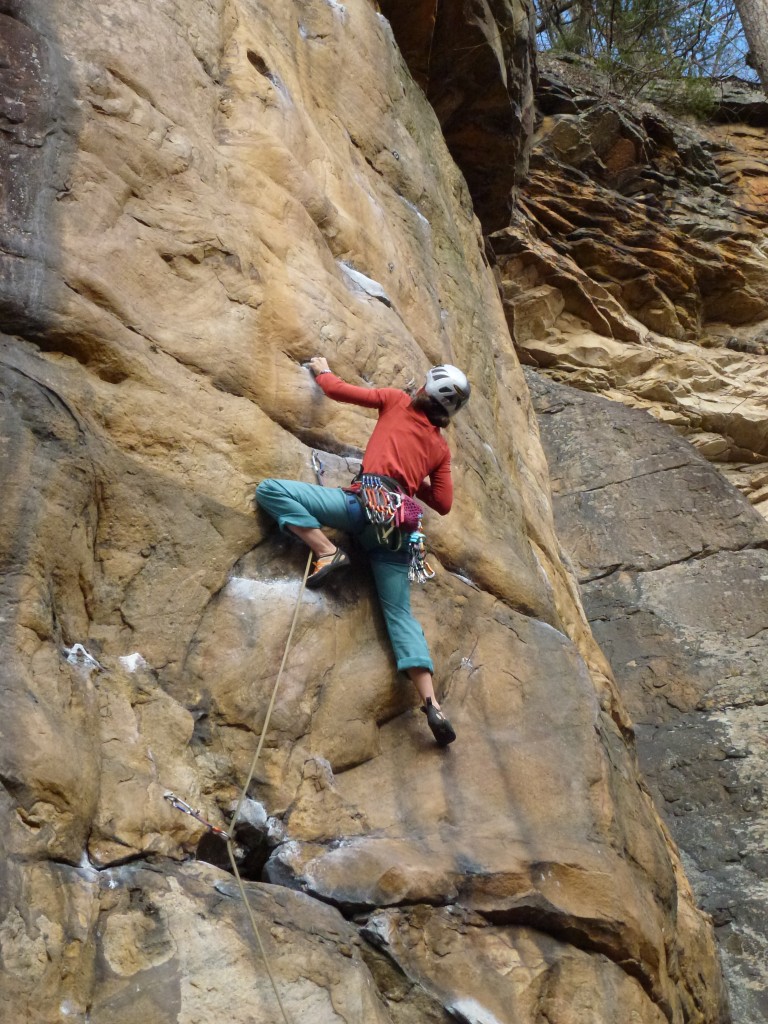 Prepping for the crux on Aesthetica (5.11c)

It’s too bad I didn’t come to that realization until the END of the trip, otherwise I think Flash Point (5.11d) would have had a different ending.  Good thing I’ve got a hubby that’s chomping at the bit to get back to it, after a heartbreaking redpoint run that came just a move or two short.  But I was psyched to work out my own personal “girl beta” for a lot of the moves on Tech-man (5.12c), including the crux, before bailing at what I was told was the last significant move before more moderate terrain.  I know the finish will be hard, but I also know I can do it, because it’s the same finish as Freaky Stylee (5.12a), a route I’ve already sent.  Some hard work and a lot of fine-tuning, and I think this route could be mine for the taking.   The only other route that I did that day was The Spectre (5.11c), a burly, physical affair that I chose to do on toprope since the crack was damp in most places and sopping wet in others.

The next day dawned a little cooler, a little cloudier, but MUCH drier – in fact, conditions were darn near perfect!  After much debate the night before due to uncertain weather conditions, we headed back to Endless, this time on the other side at the Fantasy Area, which I’d only been to once, in the summer of 2011.  Aesthetica (5.11c), was my main goal for the day, since I’d battled with it twice before and lost.  I hung the draws and dialed my crux beta in, which involves scooting off to the right…and yeah, yeah, if you’ve done this climb and done it the direct way, you are indeed cooler than me, but the long move off the crimps is too far for me (speaking of long moves…).  Anyway, I opted for the easier, but scarier and less efficient way off to the right.  The next section features two big moves one right after the other, requiring (for me anyway) full extension plus an extra dynamic “pop” just when I think I can’t reach any higher. (Ding ding!  This is when the lightbulb went off in my head…)  The rest upper section features typical well-spaced Endless Wall bolting and edgy finish.  I pulled the rope and sent on my next go, this time moving much more fluid and confidently in the reachy sections.

My friends were working on Blackhappy (5.12b) which is just a few lines down, and since the rope was up, I decided to tackle it on toprope.  To toprope or not to toprope seems like a burning question in my mind these days.  Sometimes it’s a very wise idea, other times it feels like cheating.  But after seeing the deadpoints my taller friends were making, I really didn’t think I’d have much chance of getting to the top.  But I surprised myself by being able to do all of the moves.  Had I been on lead I would have been whipping left and right, as I had to stop and rest midway between bolts numerous times, but getting on this one was a great experience, and really challenged me to make good use of all of my 5 feet, 5 and a half inches.  It felt like it was at the very limit of my abilities, and I learned a lot from working out the sequences.

This weekend taught me that I lose motivation quickly when I feel like I’m limited by reach.  (To quote my husband, “I was surprised you gave up because it looked like you never really gave it a good try….”)  It especially happens when I’m struggling in a non-crux section of the climb that my taller partners breeze right through (which can be frustrating), or when I’m struggling to reach to hang the draws on a route (which can be scary!)  And when that happens, I settle in to a non-committal mode of “trying” without ever really FIGHTING for it.  But I left the weekend with a better self-awareness and a plan for improving my movement skills.  While there might always be certain routes at areas like the New that will give me trouble, I think it’s too soon to write me off there just yet. Flash Point?  Tech-man?  Your days are numbered.  Blackhappy?  Watch your back…(eventually 😉 )

5 Responses to “New River Gorge (in January?!?) and Climbing “Tall””