As many of you know, my work on the Central Piedmont climbing guidebook I’ve been slaving over for the past year and a half is drawing to a close.  Almost all of the writing is in the publisher’s hands at this point, who is now working feverishly on the layout with the guy making the topo maps.  That being said, I just wrapped up the a final interview that will be featured in the Crowders section.  It’s an interview with a local climber who is wrapping up an inspiring endeavor, and since it had been a while since I’d posted an interview on here, I thought it would be fun to share it with you all!  Plus, Eddy is a proud Crag-Daddy himself, with a beautiful little girl just a little bit older than my Cragbaby, so his story will probably be inspiring to all the other parents out there who are working hard to balance personal goals with family life.  And for the local readers, it will hopefully give you a sneak preview of what’s to come in print.  So…..(drum roll please)….here’s Eddy! 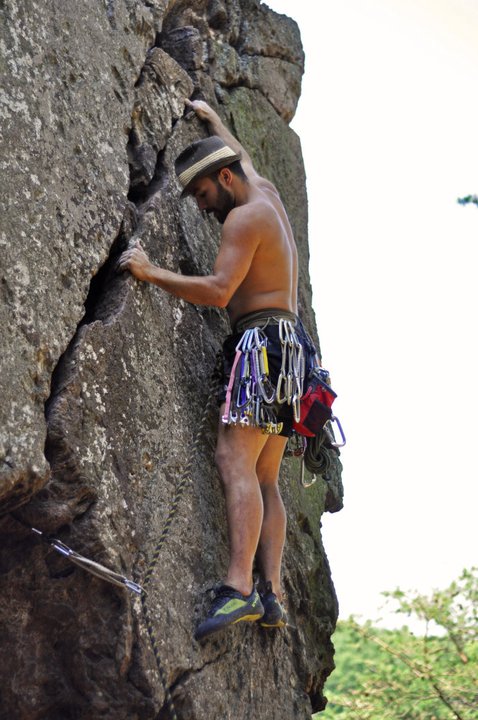 Eddy on the classic Finger Crack (5.8), early in his quest.

“Eddy Ramirez actually stumbled upon the sport of rock climbing by accident.  As a semi-professional ballet dancer, he needed to build arm strength for partnering, and was under the misunderstanding that climbing was all about pull-ups.  He soon found that climbing and dancing were a two way street.  Climbing gave him extra strength that could be applied to the dance floor, and dancing gave him core strength, body awareness, and flexibility that came in handy on the rock.  Also, many years of memorizing dance steps and intricate choreography enabled him to easily recall long climbing sequences and specific beta.

The Columbia, South Carolina resident naturally used Crowders as a training grounds, and started like most everyone does – toproping the classics.  After onsighting Electra (5.10c), the enthusiastic newbie resolved to onsight everything on the mountain.  “I was still fairly new to climbing and didn’t have any real concept of what this goal entailed…eventually that goal involved into redpointing everything in the Main Area,” says Eddy.

As Eddy slowly but surely made progress on his goal, he started moving away from the classic lines and began to focus on the more obscure traditional routes.  He found these less-travelled routes to be quite the mental battle – questionable rock and deceptive gear made for a scary combo on the sharp end.  But these challenges ended up making Eddy a more well-rounded climber.  “The great thing about learning the bulk of my traditional climbing at Crowders is that when I travel to other areas I don’t feel nearly as stressed about placing gear…being on a route with straightforward gear options means I can climb faster and more efficiently.”

Eddy is pretty humble about his project, a little too humble, if you ask me (but then again, he didn’t!).  He’s not after local fame or legend status; in fact, for a long time he kept his plans under wraps for fear he would be called crazy, stupid, or both!  He summed up his motivation well: “There are people who have achieved far more than I ever will.  I just wanted something to challenge myself with.  Honestly, I may have bit off more than I could chew.  Never the less it has been a great adventure while working towards something probably meaningless to most.  I truly love climbing and the way it continues to challenge me to evolve and grow.” 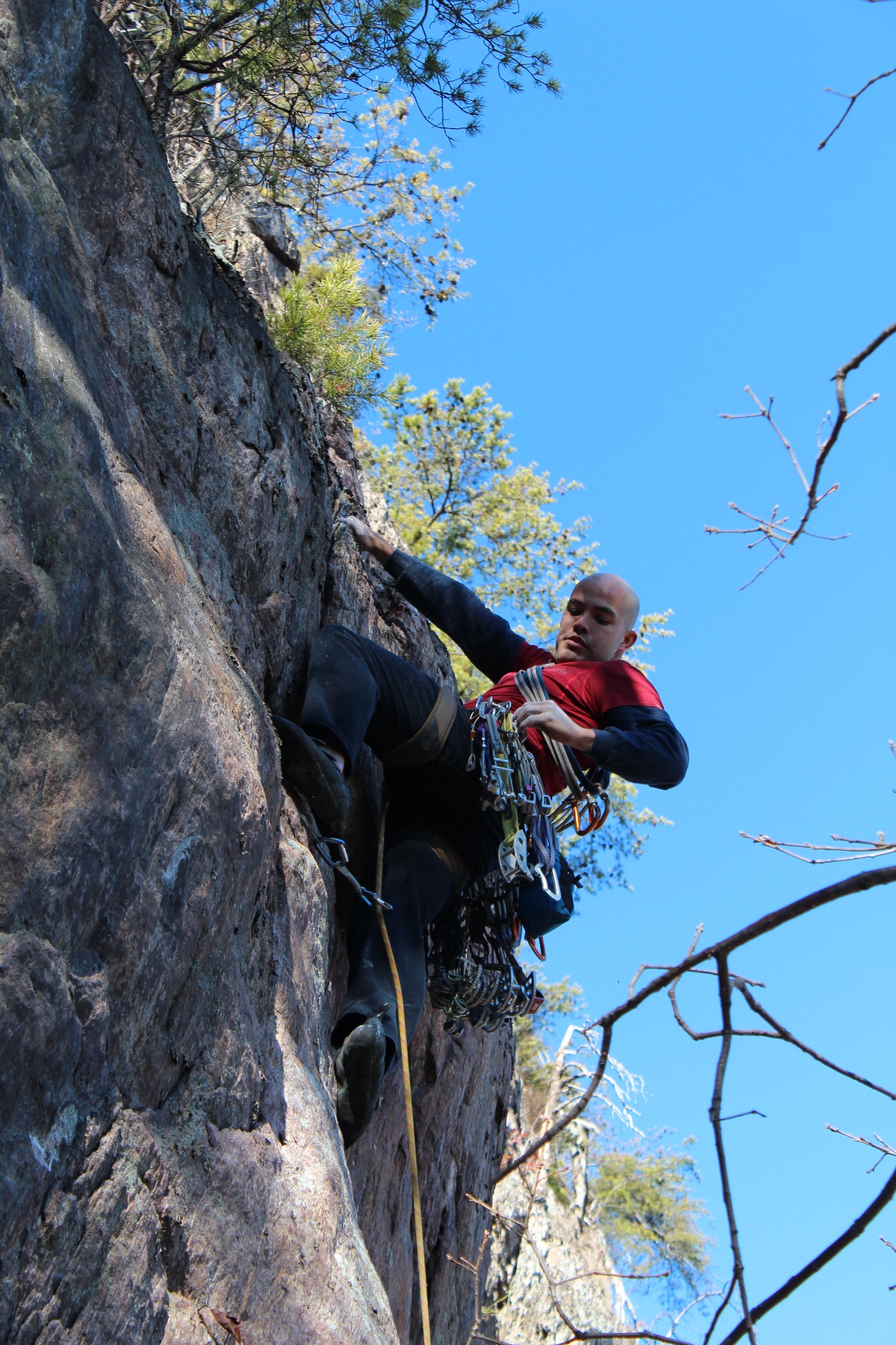 Eddy on one of his most recent ticks, Buddha’s Bulge (5.10a), which ended up being quite the gem!

Now that his tick list is dwindling, the day is counted a success if he can cross one route from his to-do list.  Most of what he has left are traditional routes in the 5.10 and up realm, many of which have “R” ratings.  (“I’m actually super scared about some of the routes I have left to lead,” says Eddy.)  Where he initially tried to attempt everything ground-up, his strategy for these more serious routes usually involves a few toprope burns to check out gear options and memorize the moves before attempting the redpoint.

At the time of this writing, Eddy has just over 20 routes left to go in the Main Area.  He hopes to be finished by the end of 2013, and has admitted that patient, capable partners will be a big factor in making that happen.  “Applications are welcome,” he was quick to add.

The Crowders Project has not only been significant for Eddy on a personal level, but also for the park itself.  He has spent numerous hours trundling loose rock, scraping dirt out of cracks, and ridding ledges of nasty briars.  This process has given some old and forgotten lines a new lease on life, as well as given Eddy the chance to nab some first ascents of his own.  Some of Eddy’s “FA’s” are variations of existing lines that may or may not have been done before but were previously undocumented.  Others are in fact independent lines that are well-protected and a great option for traditional leaders looking to broaden their skills.  But whether it’s a well-travelled classic or an obscure pile of donkey doo, I daresay every route that Eddy has touched is all the better for it.  So if you ever happen to cross paths with this self-proclaimed “sketchy Mexican,” make sure you thank him for making Crowders Mountain a better place, and be sure to wish him luck on finishing The Crowders Project.”

Thanks to Eddy for letting me interview him (and also for humoring my constant requests for pictures and research help!)  If you enjoyed his story, leave him some comment love below!  Who knows, maybe with enough motivation he can knock this project out before the book goes to print!