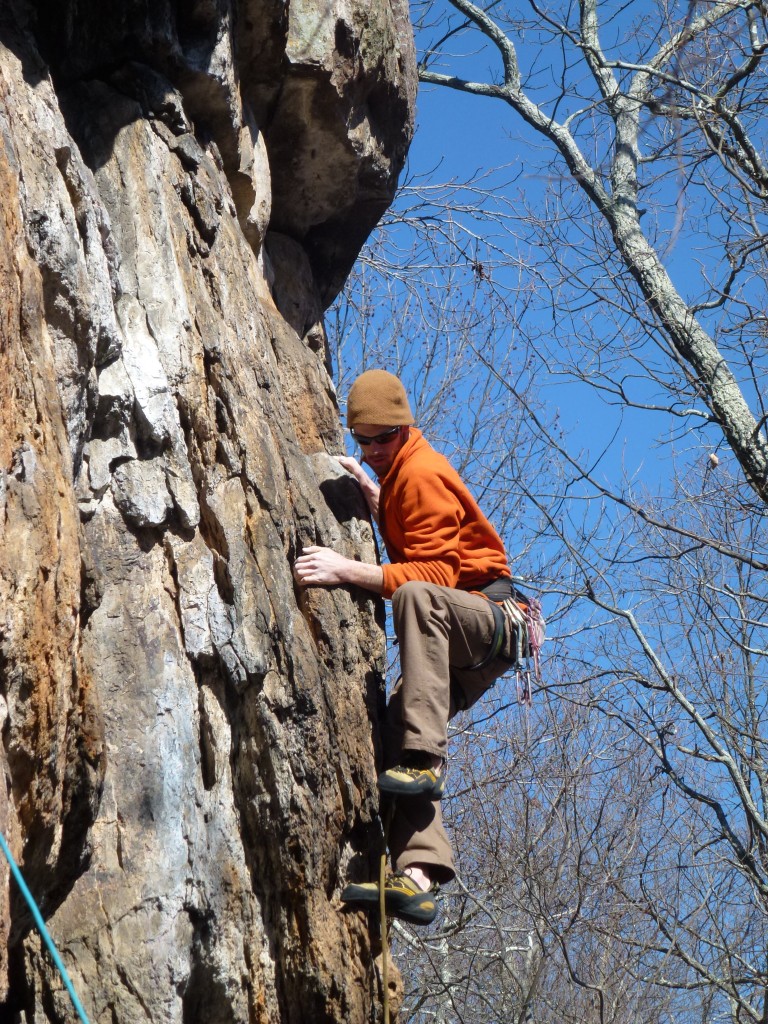 A lot of folks climb for years at Crowders Mountain without ever venturing over to the “dark side.”  Accessed from a completely different parking lot than the Main Area, Hidden wall is a small sport crag with a handful of short, classic lines, along with about a dozen link-ups and variations.  Most of the routes feature bouldery cruxes with long, burly moves on barely-there feet.  Local developer Wade Parker likes to refer to these scrappy grunt-fests as “blue-collar routes” – ie, for the working man (or woman 😉 ).  No room for dainty, tiptoe-ing technique – you’ve gotta be willing to fight for a send at Hidden Wall.  That being said, it’s a great training ground for practicing the TRY HARD mantra I’ve been adopting of late.

Our family generally operates on a “Sun’s out? Guns out!” modus operandi, but on this particular day I was the lone representative from our clan.  My better halves (2/3’s?) decided to stay home to enjoy some welcomed Father/Son time, since the Crag-Daddoo is taking is resting a tweaked finger for the next couple of weeks.  I definitely missed my favorite climbing partners, but I’m appreciative to my hubby for the rare occasion to get out by myself.  But back to the climbing… 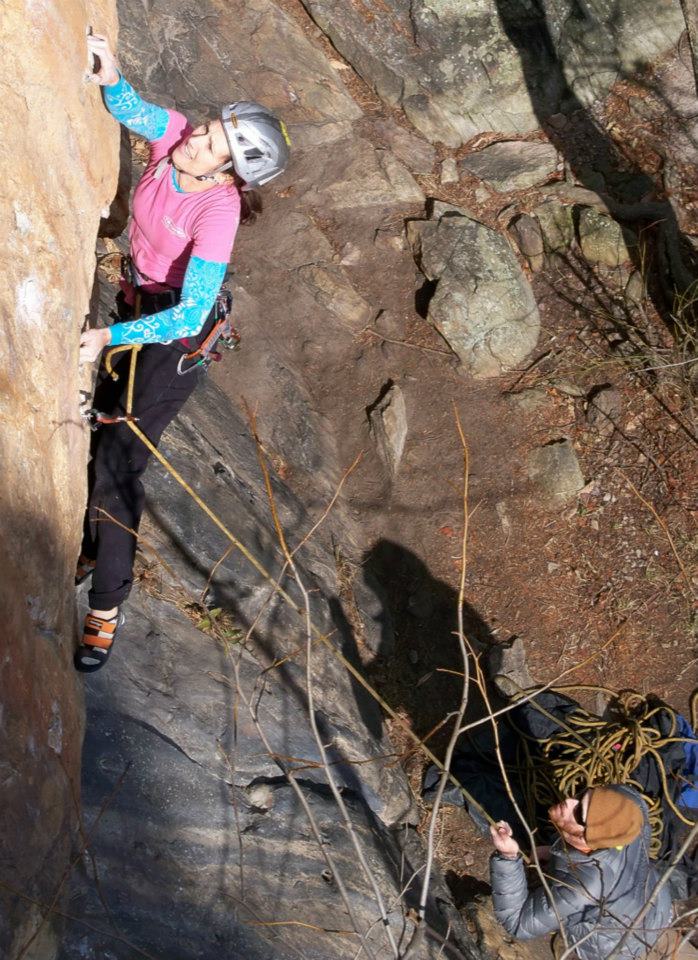 Beta for The Snag (5.12b): a solid try hard face helps you hold onto the snag hold.

The nice thing about Hidden Wall is that it starts baking in the sun at dawn, creating stellar winter conditions by mid-morning, provided that it’s a calm, clear day.  By lunchtime the sun has moved around the wall, but as long as the temps continue to creep up, the rock generally stays pleasant enough for at least another couple of hours.  It’s a short day, but certainly worthwhile considering how close by it is!  And apparently I wasn’t the only one who thought so – by noon there was a rowdy bunch of climbers swarming around a normally secluded base.  But that brings me to the second nice thing about Hidden Wall – generally the only folks that go there are people that I know (and usually like) and not some guys in adult male entertainment.  That means the rare days that do get crowded feel more like a backyard party than an outdoor gym!

One by one I’ve been ticking off the area classics, and everything left is far out of my onsight ability, so I tend to go there with one goal in mind to focus on for the day.  This particular day I only had eyes for The Snag (5.12b/c).  This route features an in-your-face boulder problem right off the deck, starting with a big deadpoint to a mail slot, followed by 3 very core intensive moves in a row off of very small, but positive holds.  The namesake crux hold is a tiny crimper that has sort of a thumb catch on top, and if you go too dynamically you’ll rip a hole in your thumb pretty darn fast, so the crux is simply managing to stay tight enough to reach up with enough precision to be able to “snag” the hold with enough control. 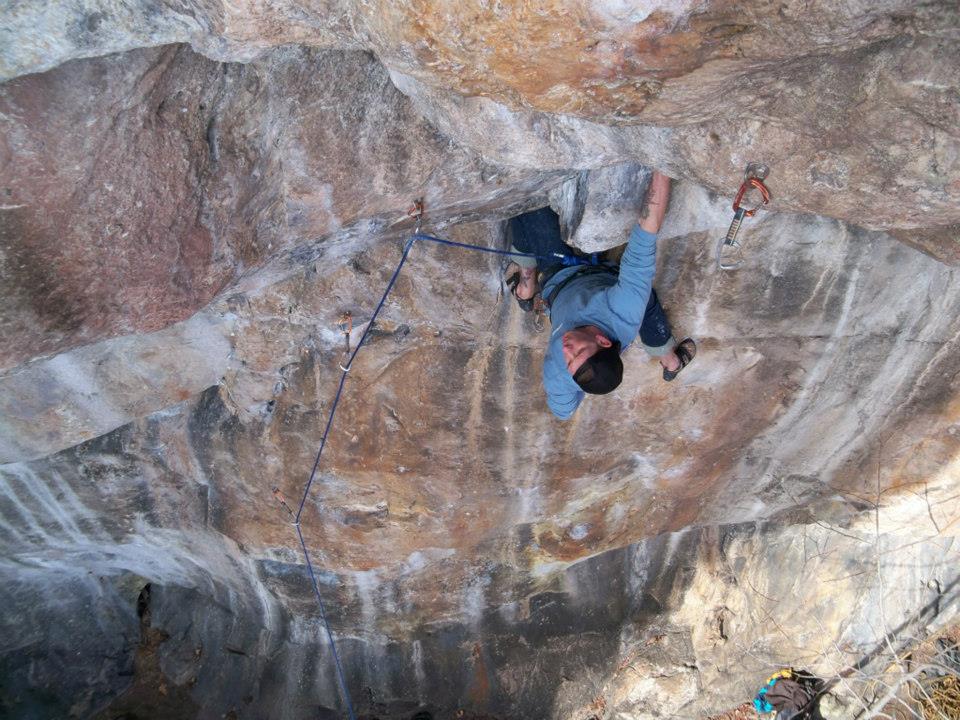 Rob preparing to get cruxy on Slabster’s Lament (5.12a)

I’d taken 3 cracks at it the week before, the first one going miserably, and the next two remarkably better, each time refining my beta a little bit more, but unfortunately we ran out of time and daylight before I could cross it off.  I was feeling good about my odds this past weekend, but my first two runs went so terrible I got completely shut down at the crux and couldn’t even hang the draws – not to mention my thumb was starting to get a little raw from so many missed “snags.”  I couldn’t figure out what the problem was, but the atmosphere was far too lively to get frustrated, so I just belayed and snapped photos for a while.  I got back on it again after lunch, and the difference was like night and day.  I fired up to the mail slot, shuffled my feet in a slightly different arrangement than I had been doing, based on some beta I’d seen one of my friends use.  I mentally told my core to tighten, turned my hips, looked up…and there was the crux hold staring me in the face, seeming a lot more attainable than it had before.  I latched it successfully and hustled up to the next bolt and a nice rest stance.  The rest of the climb went just as smoothly – yay for ticking another classic! 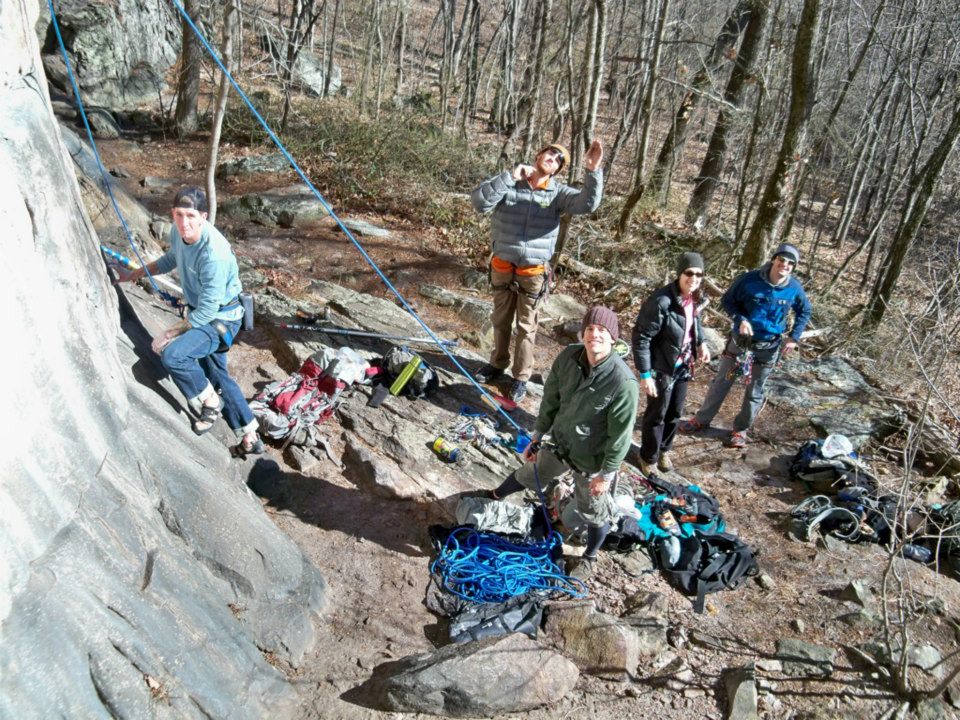 It was pretty cold by the time I got down, and I had planned to be done for the day, but I ended up taking a lap up Pteranodon (5.11a) to retrieve the draws.  It had been a long time since I’d done this one, and it was a lot easier than I’d remembered – so much so, in fact, that I’m pretty sure I found a hard-to-see hold that I hadn’t used before, so while unexpected, it was a worthwhile effort!

Along with cheering on several of my friends (I wasn’t the only that bought a ticket for the send train…), one of my highlights was getting to hang out with one of the local developers from back in the day, Wade Parker.  He was a walking, talking guidebook, filled with epic tales of first ascents and harrowing falls.  He was also kind enough to rig himself at the top of the cliff to snap photos of all of us, of which I’ve included a sampling.

What about everyone else?  Whether you climbed, skied, hiked, or just built a snowman, I hope you were able to find some outdoor time to spend together as a family!

5 Responses to “Hidden Wall: Where the Party’s At…”