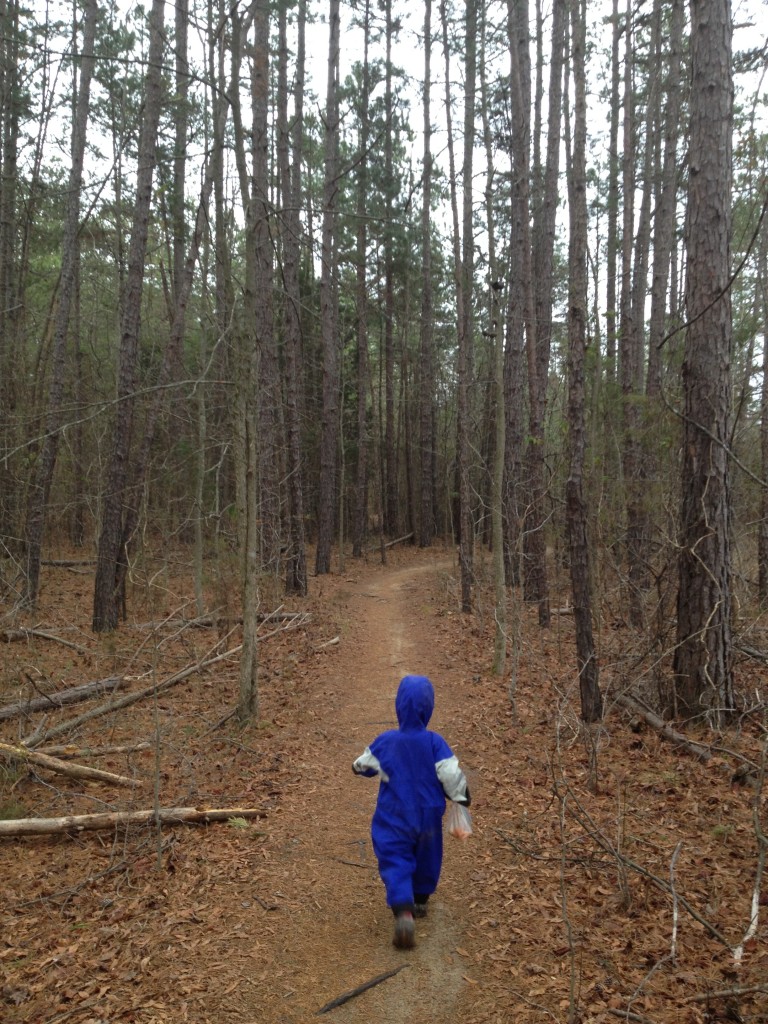 The best rainsuit ever, from Oakiwear!

Not sure if anyone else around the country can relate, but North Carolina has been having some really weird weather lately.  I’ve seen lows in the 20’s (accompanied by ice) and high’s in the 70’s (accompanied by heavy winds) in the span of just one week.  C and I decided to take advantage of one of the warmer days last week with a morning hike at Beatty Park.  The forecast had called for rain, but not until the afternoon, so I packed some water and snacks while C took on the arduous task of deciding which bulldozers got to join us on the hike, and which ones had to stay home (there is room for only two in my daypack 😉 ).  When we were finally ready and stepped outside, I was more than a little disappointed to discover that it was already raining – not hard, but just enough of a steady drizzle to be annoying.  C, on the other hand, was ecstatic.  “It’s raining Mommy, it’s raining!”, he shouted as he jumped around.

I’m not gonna lie, I was less than psyched about the rain, and was tempted to drop back and punt.  After all, C was in desperate need of a haircut, as we never can seem to find the time to go get it done. Luckily I just bought new trimmers. But just as I was getting ready to pitch my efficient new plan, C announces loudly, “We need to get our rain jackets!” 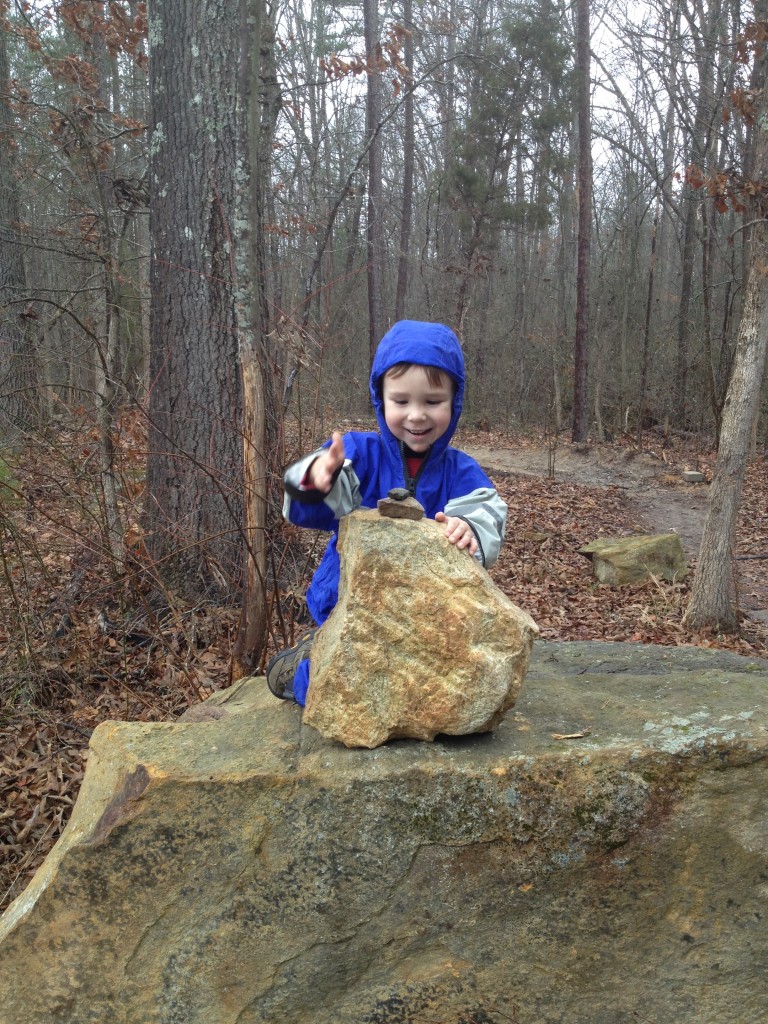 I then realized that the thought of nixing our hiking plans had never even occurred to him.  In his mind, the only logical course of action in the rain is to suit up and go, right?!?  He’s seen that example set over and over on various climbing/camping trips, why would this morning be any different?

After about a half a second of hesitation I decided to keep my mouth shut about the haircut – 65 degrees at 9 in the morning did feel pretty darn good, and wet trails would mean no mountain bikers to dodge in the intersections…I turned around to get our rain gear, but C had already located his rainsuit from Oakiwear (which I can’t recommend highly enough!) as well as my rain jacket.

The next couple of hours were a little muddy, but lovable, and definitely much more enjoyable than getting a haircut.  C talked my ear off for the first mile, before we stopped to stack rocks and break out the bulldozers.  I could hardly get a word in edge-wise as he chattered on and on about everything from the “dancing tree branches” (it was a very windy day…) to the colors on our jackets, to the various types of heavy machinery that are effective in the mud.  We kicked leaves, jumped onto stepping stones in a creek, and watched a hawk soaring high above us in circles.  It was a sweet experience, just wandering around the woods with my little boy.  By the time we got back to the car we had covered 2.2 miles, and for all but a few brief minutes towards the end we had walked hand in hand. 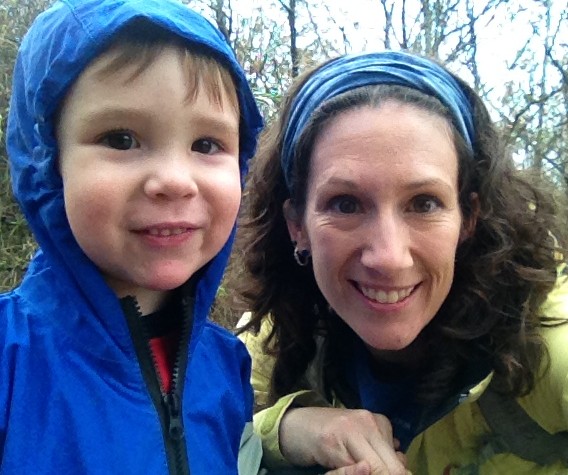 As we drove home and I listened to C spout off the roll call on the theme song for Thomas the Train, I realized that our precious morning excursion could have very easily been replaced by something much more mundane, in the name of efficiency and convenience.  Thank goodness my little guy had spoken up when he did.  It was a well-timed reminder to stay open to these opportunities for shared adventures as they come our way, and not to be so quick to write them off for something that is less important in the long run.  After all, there’s always next week for a haircut…

What simple, yet unlikely adventures has your family shared recently? 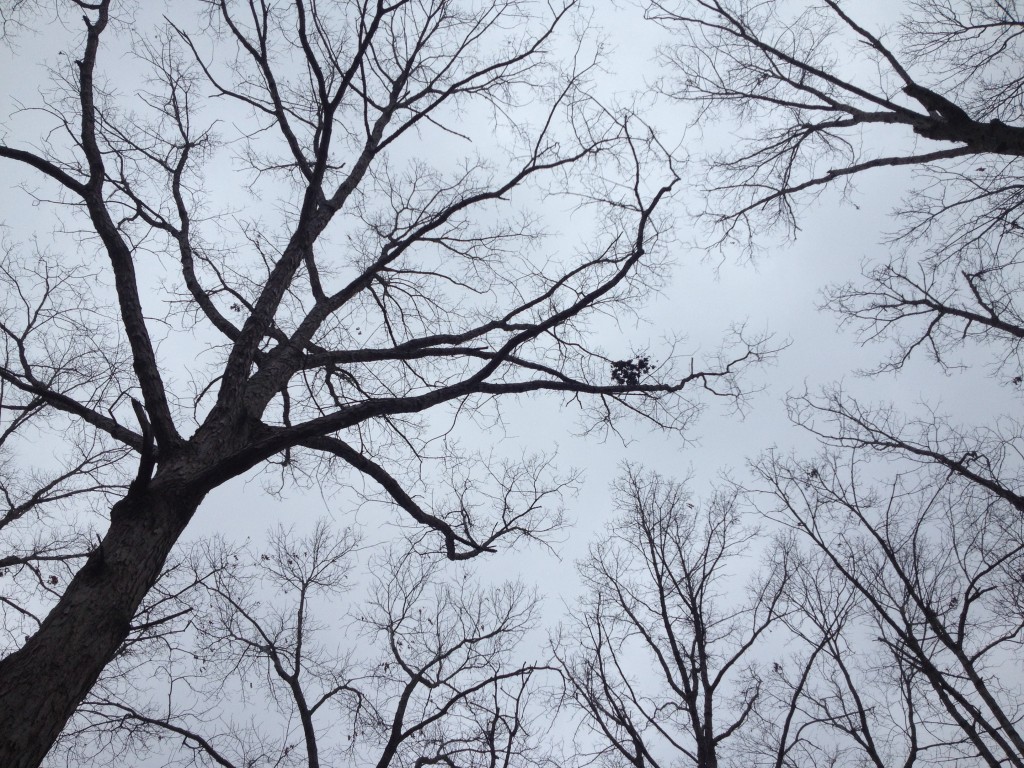 Still shot of the “dancing trees”

3 Responses to “When the Weather Gets Wet…Throw on a Rain Jacket!”