Behind every great climber is a great belayer 🙂

There’s a whole host of resources available online and in print aimed at how to successfully climb harder, stronger, higher.  However, there’s only a fraction of information available for another crucial, yet often overlooked skill that is vital to every good send: the art of belaying.  Sure, most climbers, even newbies, have a basic knowledge of how the belay system works, and understand how to use a belay device of their choosing.  They can most likely pass a belay test at their local gym and can handle the number one priority for a belayer – keep the climber off the ground.  That’s good.  You should never leave the ground tied in with someone you don’t think can at least do that.  But there’s a lot more to it than that if you want to be a really GREAT belayer.  What’s the incentive?  Besides the obvious (keeping your climber as safe as they can possibly be), a great belayer doesn’t go unnoticed.  Gain a reputation for giving a good catch, and you’ll never have to scramble to find a climbing partner again!  I know that for me personally, the closer I get to my limit, the pickier I get about who’s going to give me a catch, especially if there’s a scary clip or a long runout involved on the climb.  So whether you’re new to the sport and looking to improve your skills, or just want to be everyone’s go-to-guy (gal) for their projects, here’s some tips for turning a good belayer into a GREAT belayer.

1.  COMMUNICATION.  Work out logistics with your climber before they leave the ground to make sure you’re on the same page with regards to lowering or rappelling for single pitch routes.  In multi-pitch situations, where hearing one another may be difficult, you may need to develop a few non-verbal commands (such as X number of rope tugs) to denote on and off belay commands.

2.  ENCOURAGEMENT.  Don’t be afraid to let your climber know that you’re there for him/her.  My hubby can tell by my body language when I’m hesitating or nervous, and he’s always quick to shout, “Fall’s safe, go for it!”  My friend Sam will say without fail in a crux sequence, “You’ve got this, I’m right here with you.”  Knowing that a belayer is completely focused on the task at hand, rather than daydreaming about their own project might just be the confidence boost you need to power through a tough sequence.

A belayer receives extra points for color-coordinating with their climber…

3.  GIVE A GOOD CATCH.  Usually, an airy, soft catch is preferable to a violent whipper into the wall.  It can turn potential broken bones into stomach-dropping featherbed landings.  Many belayers have a natural tendency to sit back and hold their position without budging when they see a climber about to fall.  Unless you want to whip your climber into the wall at mach speed, do not do this.  Instead of acting in opposition to your climber, gently shift your weight forward to provide some “give” in the system.  If the fall is clean and your climber is high off the ground, resist the urge to yank the extra slack out of the system – simply lock off where you’re at and allow yourself to be pulled.  The shock from the fall will be scattered throughout the entire system – easier on the climber, easier on the gear.  If there’s a substantial difference in weight between belayer and climber, you may need to take a few extra precautions.

Note:  If there is a ledge or protruding rock/tree in your climber’s landing zone, this “soft catch” technique might only make matters worse.  ALWAYS be on the lookout for obstacles that might get in the way in the instance of a fall and give and take up slack accordingly. 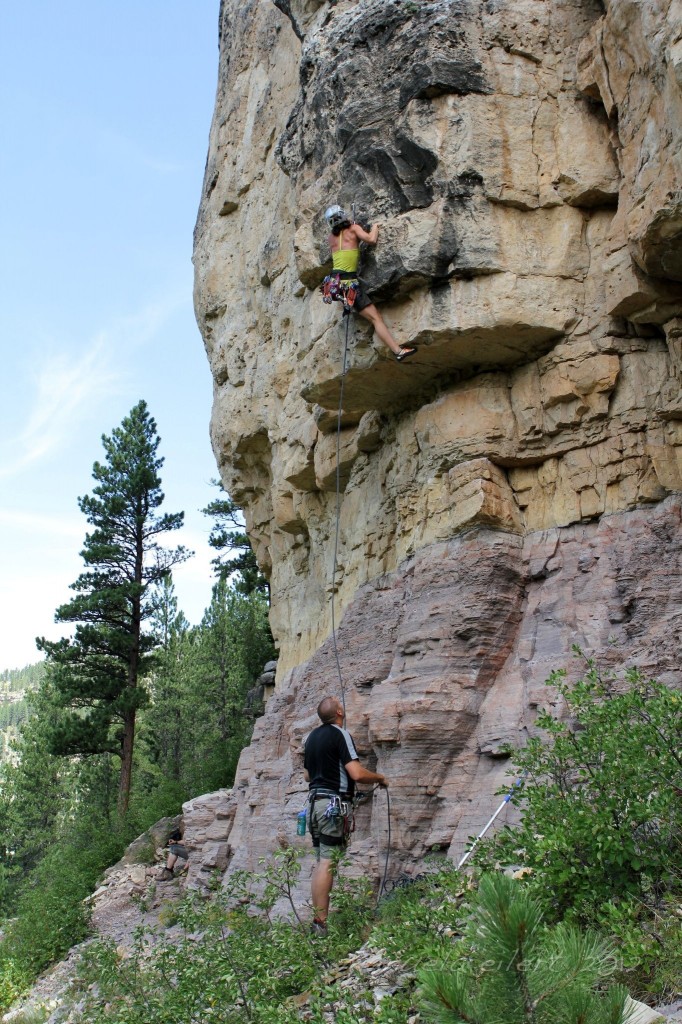 4.  PAY ATTENTION.  If you see your climber doing something that looks weird, don’t be afraid to speak up.  Don’t assume that they realize the rope is behind their leg, or that they “meant” to back clip that last draw.  Better to say something needlessly and feel a little silly if you’re wrong than to hold your tongue and regret not being able to prevent an accident!

5.  DON’T SHORT-ROPE.  Anticipate when your climber is going to reach down so that you can time your slack with their clip.  Nothing is more frustrating than reaching down to pull up rope in a tenuous clip to find that your belayer is not doling out enough slack!  Be especially careful during traverses – if you keep your climber too tight, you can pull them off the wall, but keep them too loose and your climber runs the risk of stepping on the rope.

When it comes right down to it, belaying is a lot more than just holding a belay device.  When you tie in with another climber, you hold that person’s life in your hands (literally), and they are counting on you to use good judgment.  I’ve definitely been in situations where a good belay kept a scary fall from potentially causing injury, and while I’ve thankfully never been hurt because of a bad belay, I’ve certainy had my fair share of unpleasant catches (usually from big dudes that stand as still as soldiers when I fall.)  Don’t forget that when you’re dealing with a new partner that’s never belayed you before, it’s perfectly acceptable to discuss how you like to be belayed – any partner worth climbing with will listen to your requests.  And if for whatever reason you have your doubts about someone, get someone else to catch you, or come back another day.  Again, better safe than sorry!  (And on a somewhat related note, if you’re in the market for a new belay device, check out the Cinch!)

To the other climbers out there, what qualities are most important to you in a belayer?  What makes one particular person a “go-to” over someone else on a hard onsight or a project?

15 Responses to “How to be a Great Belayer”