The writer in me loves metaphors and analogies, which is one reason why I love writing about climbing.  Time and time again I’ve been able to apply concepts from the rock climbing world to my life as a mother, wife, and friend.  What a lot of non-climbers don’t realize is that there are actually several different disciplines, or styles, of climbing – some of us may have an end goal to climb Mt. Everest, whereas others of us may aspire to touch every piece of local rock that we can.  Each discipline has a different set of values, ethics, and goals, and the following is a concise attempt to summarize what life lessons can be gleaned from each… 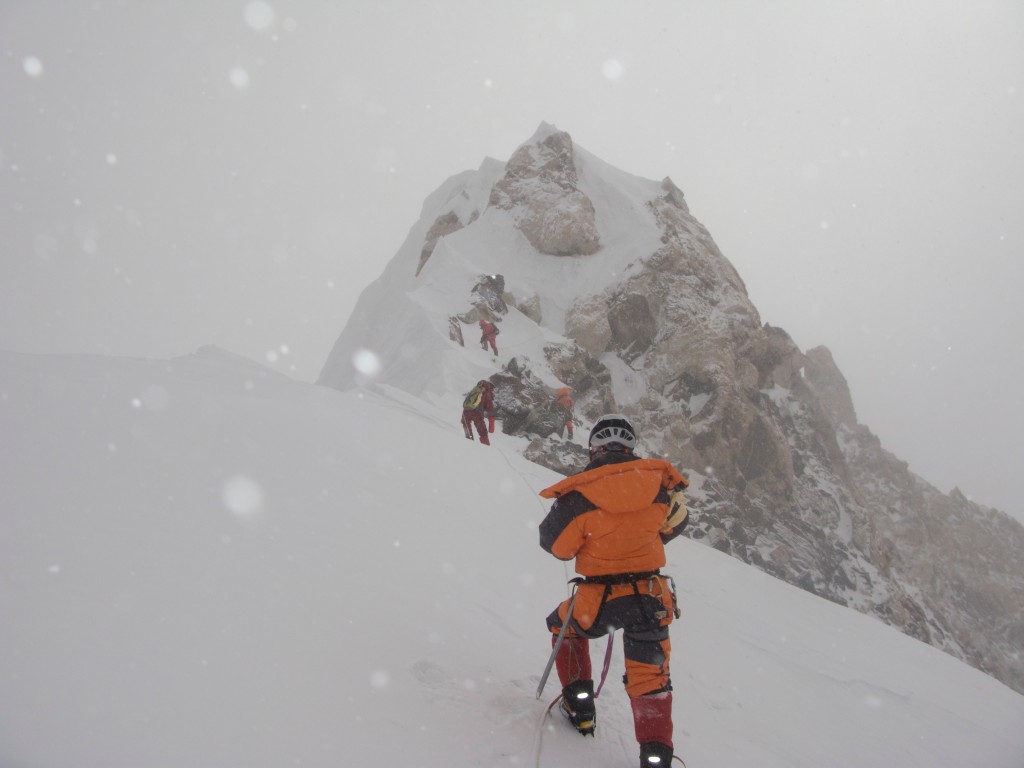 Chris Klinke from Trango on the summit ridge of Makalu

The Mountaineer:  “It doesn’t have to be fun to be fun.”
Why it’s true for climbers: Alpine climbers are built tough, as they willingly subject themselves to far more hardships than the average climber.  If you’ve ever listened to interviews with the elite group of men and women who have climbed the highest peaks in the world, you can hear it in their voice, and see it in their eyes – there are many times where “fun” is the last word that describes their journey.  But back on the ground, it’s easy to see that their experience as a whole is far greater than the sum of its parts.  The nasty effects of oxygen deprivation and frostbite are overlooked in those brief moments on the summit before undertaking the most dangerous task of an expedition (getting down).  Mountaineering is very much an “ends justifies the means” sort of endeavor, and is not for the faint of heart.
Why it’s true in life:  Whether you find alpine climbing inspiring or masochistic (or a little bit of both…), we can probably all relate to mountaineers in this aspect.  My guess is that when you look back at your most memorable life experiences, you’ll find that at least a handful of those memories make for great stories to retell, but were anything but fun to endure. 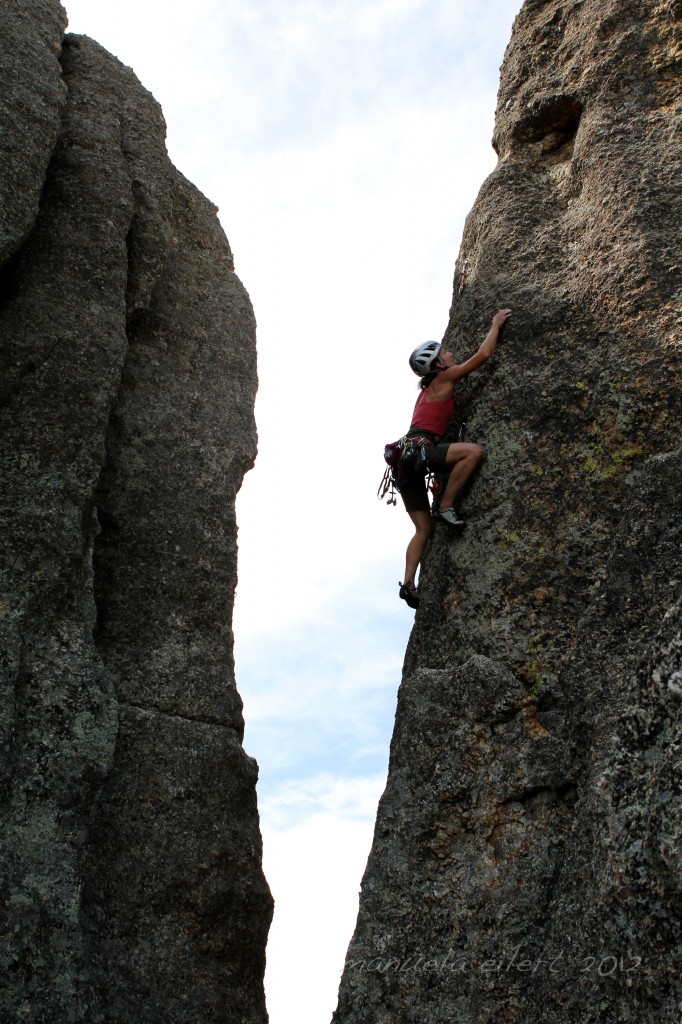 The runout head games in The Needles of South Dakota is the definition of this mantra!

The Trad Climber:  “It doesn’t have to be hard to be hard.”
Why it’s true for climbers:  Try putting a 5.12 sport climber on a 5.9 hand crack for 600 feet and see how physically and mentally exhausted they are at the end of the day.  When it comes to traditional climbing (placing your own gear in the rock as opposed to clipping pre-placed bolts), a much broader skill set is required.  It’s a lot more committing, as route-finding, choosing the right gear, and placing that gear correctly are just as important (if not more so) than doing the actual “moves” of the climb.
Why it’s true in life:  Sometimes the most simple concepts are the hardest ones to apply.  Eat healthy.  Exercise regularly.  Be kind.  Forgive.  Be thankful.  It’s not uncommon for people (myself included) to struggle at times with these seemingly easy life skills- on paper they may not be hard, but the holistic approach needed to master them can often prove to be quite difficult. 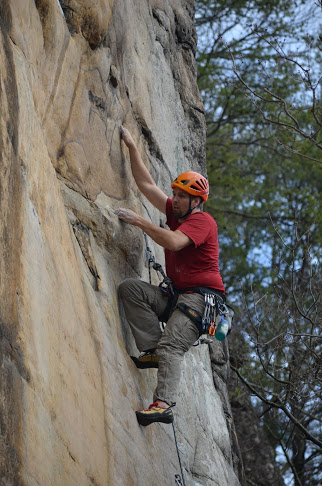 Crag-Daddoo vying for his hardest send yet at the New River Gorge.

The Sport Climber:  “Your most competitive rival is yourself.”
Why it’s true for climbers:  Nothing is more satisfying than finally sending a long-term project, and nothing is more humbling than watching another climber take a casual warm-up lap up the same route.  The immature climber will walk away with a bruised ego, whereas the experienced climber will take the opportunity to watch and learn from those that are more skilled.   For me, one of the most refreshing aspects about climbing is the ability to compete ALONGSIDE others without competing AGAINST them (just as with a marathon…but a lot more fun!)  Not that there’s anything wrong with a good-natured rivalry, of course, but the  climbers that seem to have the most fun are the ones that are intrinsically motivated to achieve personal goals (climbing 5.___, or climbing “X” route) rather than extrinsically motivated to “beat” so and so, or to climb 5.__ before all of his/her friends.
Why it’s true in life:  As in sport climbing, you will always encounter those that are both better and worse than you at certain skills.  We are each blessed with certain strengths and weaknesses, and it’s our job to play the hand we are dealt.  Comparing yourself to others, whether in climbing or “real life,” is a path that will only lead to disappointment.  Rather than focusing on what others are doing, focus on what YOU can do, and you might surprise yourself. 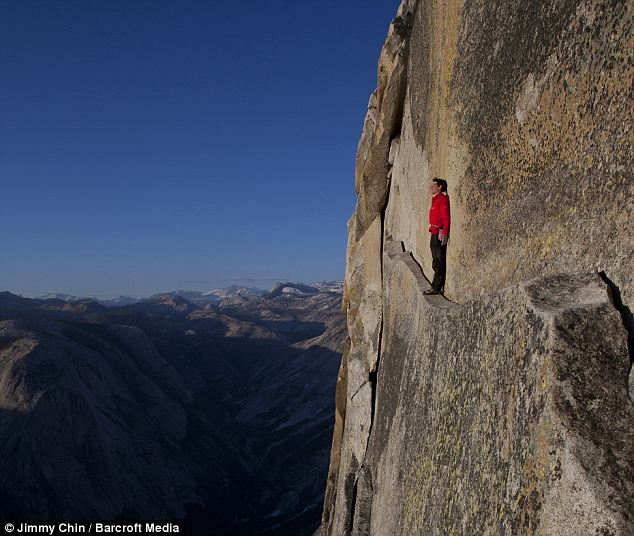 Has anyone on the planet NOT seen this picture yet?

The Free Soloist:  “Less is More.”
Why it’s true for climbers:  Free-soloing (climbing without the use of ropes or other gear for protection) is not something I’ve ever taken part of.  The risk is obvious – if you fall you die, which for many (me included), is a deal-breaker.  But for those that dare to accept that risk, they usually describe a zen-like feeling and awareness that they have only experienced upon leaving the rope, harness, and gear behind.  Free-soloists travel light, without being weighed down by gear.  It’s just them and the rock, and all they have to focus on is the movement itself – a feeling of freedom indeed.
Why it’s true in life:  You don’t have to be a free-soloist to appreciate the life lessons they illustrate.  Many times we make life far too complex, and end up being weighed down by circumstances of our own doing.  The next time you’re making plans for a family vacation, party, or even just a weekend at home, keep it simple.  Because sometimes less is more. 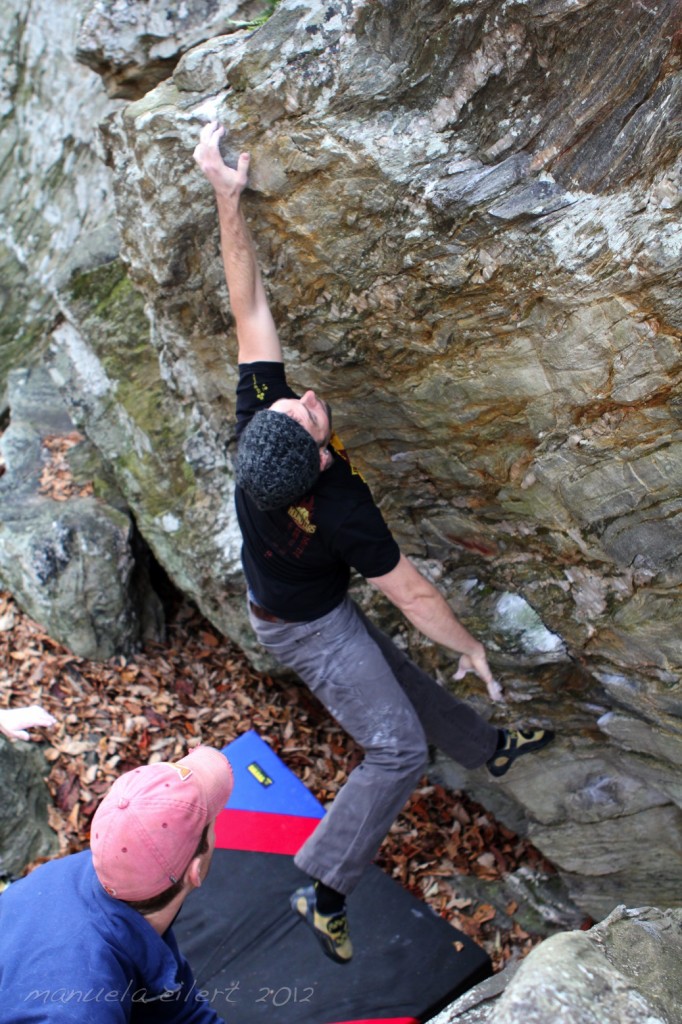 Rob Pryor dyno-ing the path of MOST resistance at Moore’s Wall.

The Boulderer:  “The hardest path is the most rewarding.”
Why it’s true for climbers:  If I only had a dollar for every time I’ve heard a climber try to explain the concept of bouldering to a non-climber and gotten this response: “You know you can just walk up the back to get to the top, right?!?”  What the non-climber doesn’t understand is that the essence of bouldering revolves around doing the hardest moves physically possible.  The hardest way up is the whole point!  Unlike with roped climbing, sequences consist of just a few moves; once endurance is factored out, it’s amazing what feats of strength the human body is capable of!
Why it’s true in life:  Remember the first time your parents made you save up for something and buy it yourself?  Since you had to work for it, it probably meant more to you, and receiving it was more rewarding than had it just been given to you.  This the exact same concept.  The same folks who have fought their way through struggles and trials are the same folks who are stronger in the end, and can look back and see how far they’ve come.

This is certainly not a complete list, but do any of these mantras ring true for you?  If you are an active participant in any of these disciplines, what else would you add (or would you disagree with any of the ones listed?)