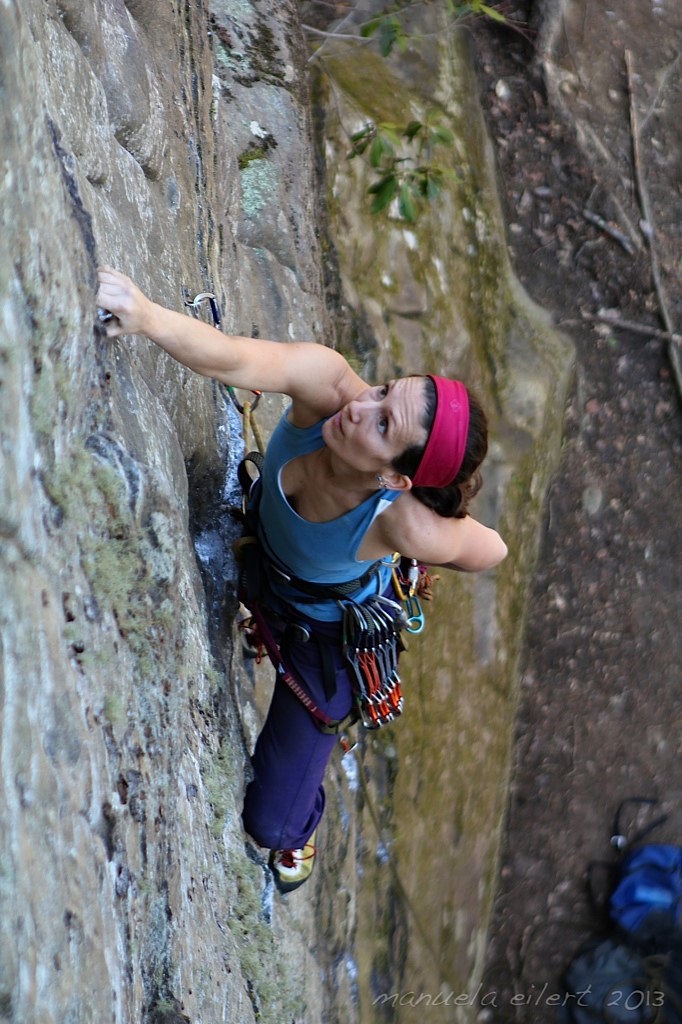 Over the past few years it’s been tradition in our family to head to the Red River Gorge twice a year – once in the spring and once in the fall.  While we’d love to make it up there more often than we do, it’s hard to justify such a long drive when we can get to the New River Gorge in half the time!  Last spring I got cheated out of our spring trip due to a rather unattractive ankle boot, so this year a trip to the Red seemed like the perfect kick-off for the spring climbing season!

Here’s the highlights from 4 days of crankin’…

LAND OF THE ARCHES:  We stayed at a new (to us) campground this time around, and were very pleased.  While LOTA is pretty small, it’s more centrally located than Lago Linda’s, and is much quieter than Miguel’s.  With a giant indoor building filled with ping pong tables and couches (along with a few random conversation starters, like a unicycle and a wheelchair…), there is a community vibe that feels much more like a hostel than a typical campground.  The first two nights the temps were in the high 20’s, so we (along with several other people) opted to camp INSIDE the building rather than out.  Once the lows pushed up closer to the 40’s (and the weekend crowds came in), we moved our tent outside and enjoyed sleeping under the stars for our remaining nights.

GETTIN’ GIDDY:  Our crew had a chance to try out some climbing balm from Giddy Organics, a relatively new company out of Chapel Hill.  It. Was. Awesome.  I ended each day with raw fingertips, but after “gettin’ giddy” by the campfire at night, I’d wake up with skin that felt healed and renewed.  I even liked it better than Climb On, no lie!  (Wanna try some?  Read on…) 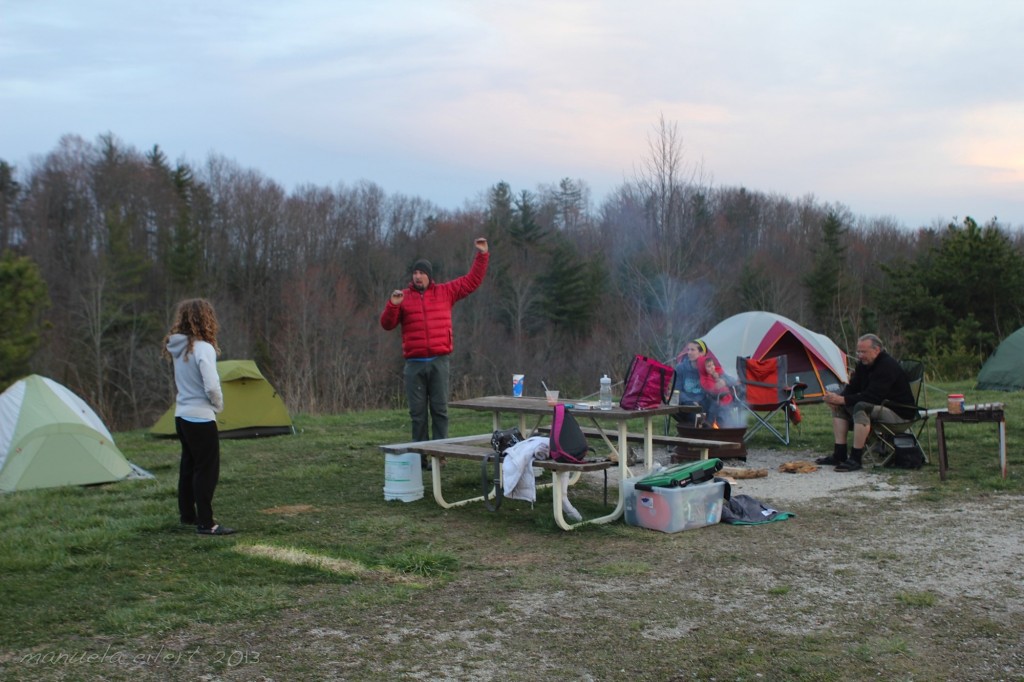 THE “NEW” AT THE RED:  I mentioned last week that I suffered a knee injury about a month ago, so coming in to this trip I was very cautious and had no idea how hard I’d be able to climb.  My main goal was to just to have fun getting some mileage on onsight/flash-able terrain (Non-climber note: Onsighting and flashing a climb means sending them on lead on your first attempt – a flash being after getting the beta spraydown, usually from watching someone else climb it, and an onsight being without any previous knowledge of the route).  Over the past few months I’ve mostly been doing day trips to local areas, where the only routes I haven’t done yet are well above my onsight level.  My focus had shifted more to projecting routes, so I was psyched to get on terrain I’d never seen before.  By the end of the weekend I realized that out of the 14 routes I got on, every single one of them had been a new one for me! 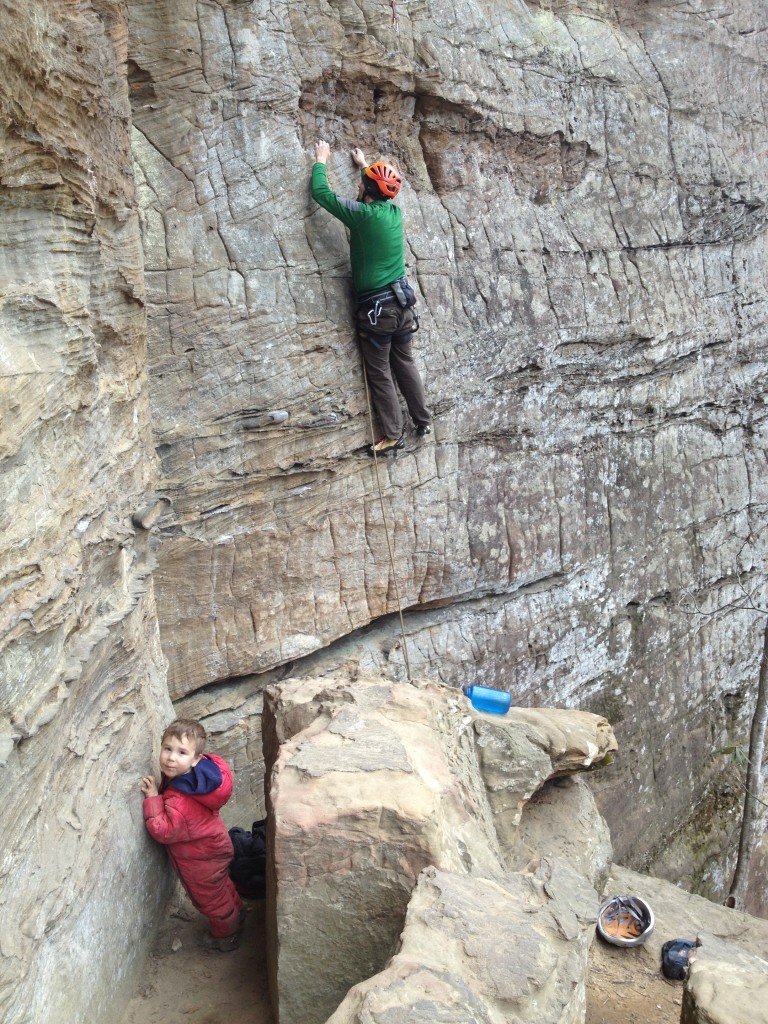 DAY 1: “The Playground” at Pendergrass-Murray-Recreational-Preserve (PMRP)
Monkey Bars (5.10a) – One by one we all punted off the (very steep) warm-up.  (“Hey NRG face climbers…welcome to the Red!”)
Balance Beam (5.11a) – Vertical, technical, and much more our speed…one by one we all got our confidence back with a first-go send.
Jungle Gym (5.10b) – Definitely the better of the two pumpy 5.10’s on the wall.

DAY 2: “Chica Bonita Wall” (PMRP)
While this day was a big confidence boost for me physically since it was the first time I’d really pushed myself since the knee injury, it left me feeling a bit sheepish about my mental game (read: I hiked away with my tail between my legs).
Raindancer (5.10a) – Just a short little warm-up number before getting to the good stuff on the right side of the wall.
Brown-Eyed Girl (5.10a) – Long, technical, slab line, definitely deserving of the 4 stars the guidebook gives it.
Baby Blue Eyes (5.10c) – A harder (and better) version of the previous climb.
You Take Sally (5.11d) – Not entirely sure about my knee, I opted to toprope this one…but then felt like kicking myself for the dreaded toprope flash!  So instead of walking away with the prized nugget of a first-go send I walked away with…pretty much nothing, as I’d much rather make it to the top on lead (even if it means falling at every bolt), than climb something clean on toprope.  Oh well – I just chalked it up to a conservative decision that had a much better worst-case scenario than me having an epic on lead because my knee was hurting.
Bessie (5.11c) – I decided to take what I thought was a new found physical confidence in my knee to the slightly easier Bessie, but this time on the sharp end. This was the final nail in my mental confidence coffin, as not once, but TWICE I had to stick clip my way through difficult sections that I couldn’t commit to on lead, even though the falls were clean. In both instances I made the move easily on the first try under the safety of having the next bolt clipped, so I’m pretty certain that my only excuse was that I had forgotten to bring my “big girl panties” to Kentucky with me. 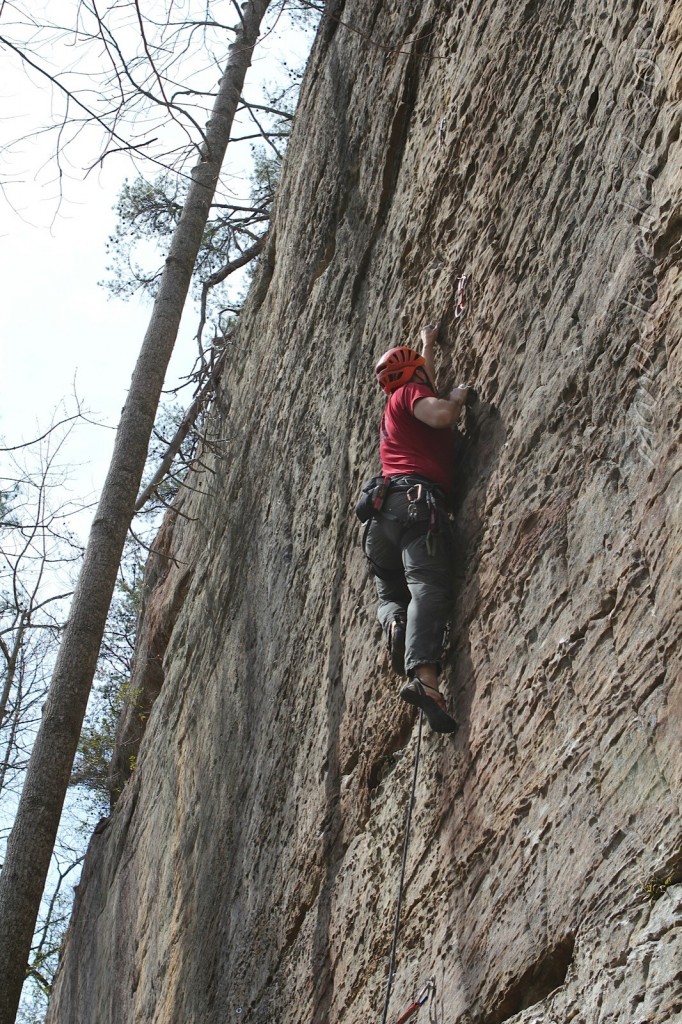 After the shenanigans of the previous day, I resigned myself to a day of practice falls to get my lead head on straight…but that turned out to be totally unnecessary.  Not sure what happened overnight, but I felt back to my “old self” by day 3.  I guess there was just some residual fear lingering around the knee injury that needed to get out of my system the day before.
Annie the Annihilator (5.10c) – This one annihilated my forearms (that tends to be a theme at the Red)…but I was determined not to pitch off of another warm-up!
Makin’ Bacon (5.10d) – Not as steep as the other routes on the wall, but much thinner.
Mid-Life Crisis (5.11c) – My favorite route of the whole trip, and very typical of the Red – the grade is based on the sum of its parts rather than any singular hard moves.  Small, rounded pockets on an angle just steep enough to get your pump clock ticking.  The last 3 holds felt alarmingly small, but I managed to hold on for the flash before the lactic acid caught up with my forearms.
Posse Whipped (5.12a) – After that success, I felt like I was ready to turn my attention to something harder and more involved.  Posse Whipped was a stunning 90 foot masterpiece, mostly sustained crimping, with a few tenuous clips for good measure.  The last 15 feet or so pull a small roof on big holds to add some variety.  My first go went pretty well, and I rehearsed the crux moves again on the way down.  There are two cruxes, the lower one with a very long and intricate sequence, and the upper one with a couple of deadpoints to small but positive holds.  Two big shake out jugs separate the two sequences, and that’s probably the only holds keeping this route at .12a).  After a good long rest, and cheering everyone else on the equally good Social Stigma (5.11b), I pulled the rope and went again, knowing that my odds of sending weren’t great, but that I owed it to myself to try.  Even though I botched my beta in a couple of places, I managed to get into a good rhythm of breath and movement, and before I knew it, I was at the shake out jugs entering the second crux.  I felt surprisingly solid on the next couple of moves, but I pitched off making the move to the clipping hold for the next to last bolt.  Darn it.  I guess I could have been disappointed, but after how timid my head had felt the day before, 3 flashes and an almost send (with a balls-to-the-wall-going-for-it fall) was still a very satisfying day. 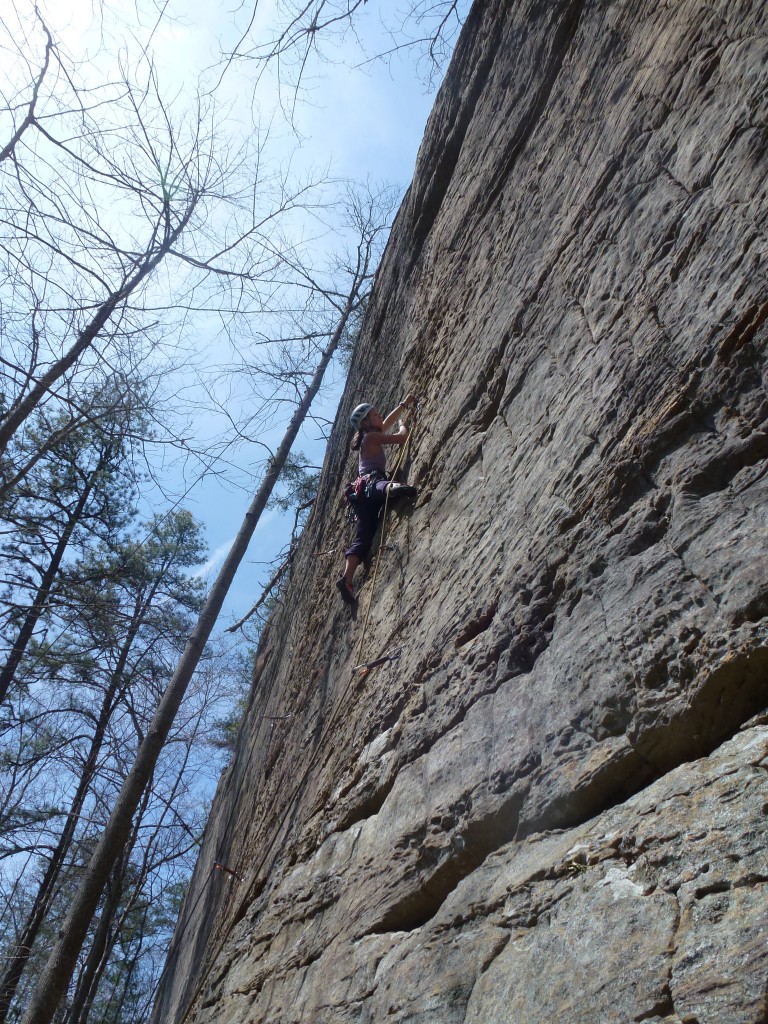 Working out the beta on Posse Whipped (5.12a)

DAY 4:  Courtesy Wall (PMRP)
STD (5.10a)
Our last day was actually a bit anti-climactic.  Our spirits were willing, but our four-days-on flesh was very, very weak.  We left around lunch time, and the whole car ride home was filled with the joyful banter of old stories along with recounting the new stories we’d added to our memory vaults from the weekend.

After the uncertainty I’d had with my knee leading up to this trip, and the mental roller coaster my lead head had been on while we were there, I guess the main takeaway I got from our trip was this – you may not always send, but it’s impossible to really “fail” when you’re giving 100%.  Taking those falls are an important step along the way to success.  If you never put yourself in a position to fall, you’ll never really be in a position to succeed (and not to pontificate too much, but that probably goes for life in general too, not just climbing…).

Any other stories of “succeeding in failure” or “failing in order to succeed”?  Share a story of mental breakthrough and you’ll be entered to win your own tin of Giddy Organics Climbing Balm (like Cragmama and Giddy Organics on facebook for multiple entries).  There will be 3 winners and the contest will run through Tuesday, April 15th.  Oh, and for more photos, check out the gallery here… 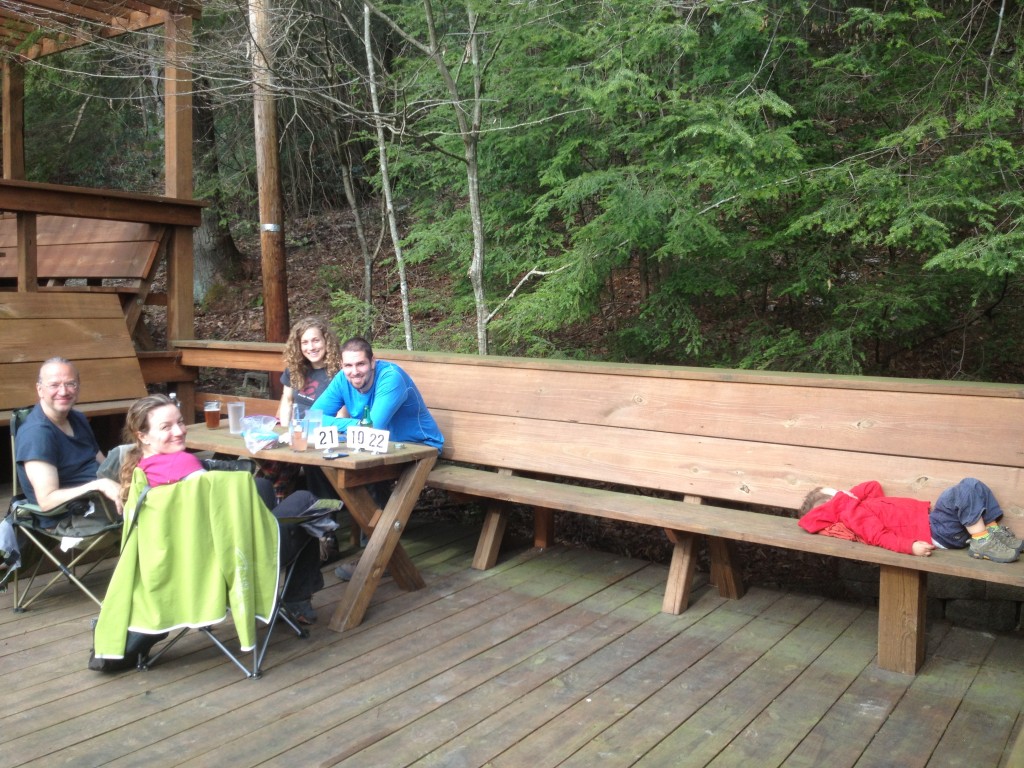 Dinner at the Red River Rockhouse with one konked-out kiddo!

9 Responses to “Highlights from the Red River Gorge – and a “Giddy” Giveaway!”