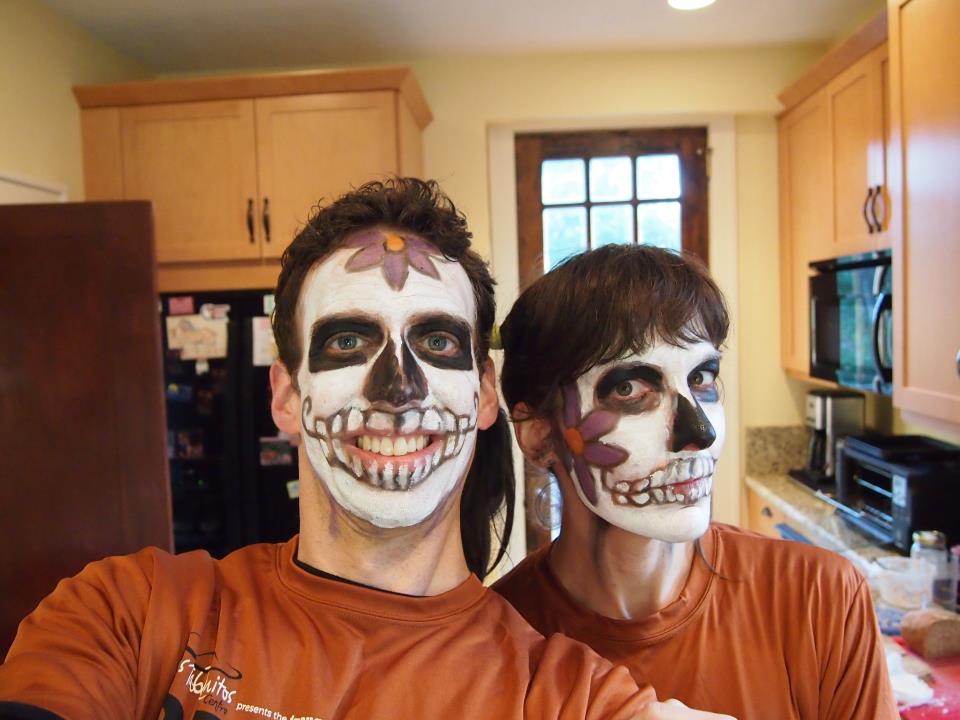 Throughout the 3 years or so that I’ve been writing on this blog, I’ve had a chance to interview some really cool people, most of whom have pretty inspiring stories.  The neatest part for me however, is that very few of these interviews are with people that I didn’t already know beforehand, at least in some capacity or another, whether they be close friends or just acquaintances.  Anne McLaughlin and tom Drewes are no exception.  I first met them (collectively they are referred to as “the McDrewes”), on a chilly winter day at a local bouldering field many years ago.  We found common ground immediately when we realized we both had a soft spot in our hearts for El Potrero Chico, and although we haven’t seen them since we’ve moved to Charlotte, we still keep track with each other’s adventures via facebook (oh the glories of the internet!)

One such adventure that Tom and Anne have undertaken together is the notion of “streaking.”  Each of them has made a goal to run 1 mile each day (fully clothed…usually 😉 ).  The concept is pretty simple, as there are really only two rules – they must run (no walking allowed), and it must be at least a mile.  Other than that, it can be inside, outside, fast, slow, etc.  I heard it through the grapevine that Tom and Anne had recently celebrated 2 years of daily running – that’s 730 days folks!  Anyway, I thought their story might be a good one to include in the Running for Rock Climbers Series, and I was delighted when they indulged my interview request.  Here’s what they had to say about their journey. 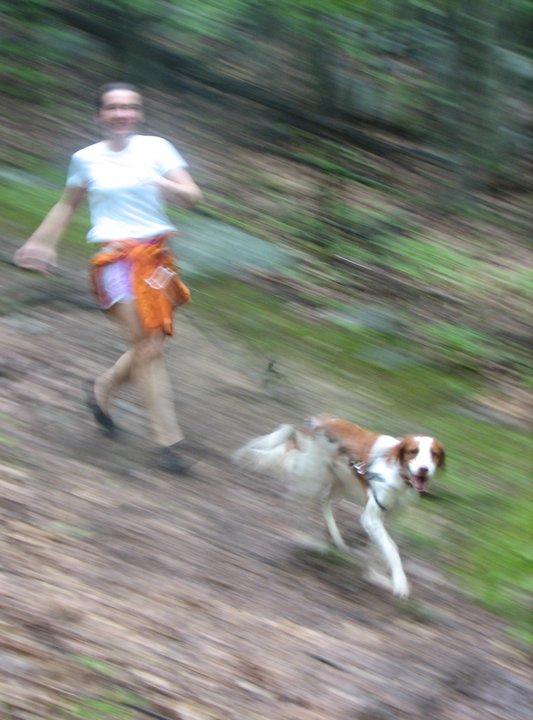 Anne “streaking” with Royal, one of her favorite running partners

How long had you guys been running before deciding to “streak”?
Anne: I hadn’t been running, that was the problem. I had zero motivation, was out of breath on approaches, and hated running even more than sitting at home doing nothing, thinking about how I should be exercising…I got the idea from an out of town colleague on a business trip.
Tom: I had run on and off since around 1990 — never too seriously but I think I managed to run a very slow 10 miles in my college years.  When Anne told me about the streak I thought it would be a good spring board to keep motivated for continuing running as well as a way to support her interest in running.

Talk to me about logistics – JUST one mile everyday?  Some days more?  What’s your schedule like?
Anne:  I’m not training for anything, and the casual nature of the streak is what most appeals to me. I don’t *have* to do anything except for the mile. If I feel like running longer, I do. If I don’t, I stop. The beauty of the streak is that I know I have to do that mile, and the first mile is always the hardest. If I knew I had to run four miles, I’d put it off and never start. I would dread it. But with just one mile it isn’t so hard to get started. Most of the time I feel like running longer once I’m into the mile, because the hardest part of running is getting your shoes on and out the door.
Tom:  I was already running around 3 miles every other day when we started, so I would just accompany Anne for a mile and then run a bit more. On my former rest days, I would just do a mile.

You guys are pretty adventurous folk.  How hard was it to squeeze your running in on climbing trips?
Anne: Not hard at all, actually. It’s only about a 10 minute commitment. We get up, run the mile, and are back before coffee is ready. Sometimes we’ll even save it for during the climbing day so we can run on a trail.
Tom:  It’s really always worked out well.  Besides usually getting to run someplace beautiful, it can be a nice way to stretch out a bit and wake up before jumping on a route at the crag. 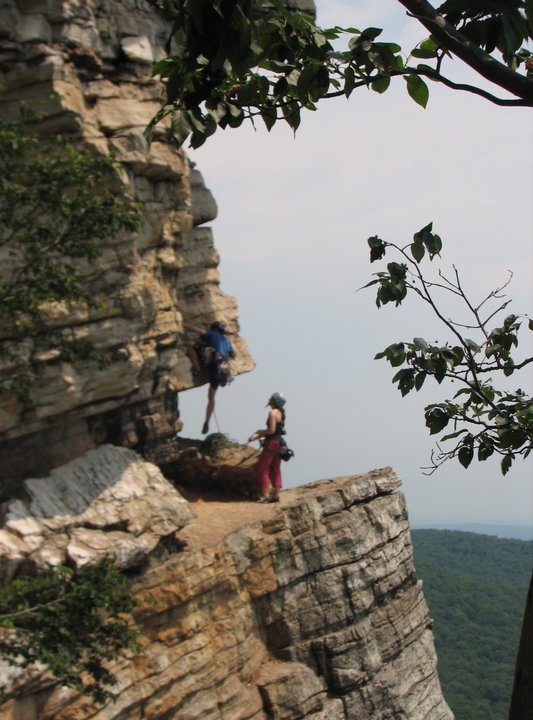 Tom and Anne climbing together

What about “extenuating circumstances” – bad weather, illness, etc.?
Anne: Just run the mile. You’d be amazed at how running a mile clears your sinuses! Granted, I haven’t had the flu in two years, so check back with me after a major event like that. But I have run in blizzards, rain, sleet (pro-tip: wear a baseball cap!) and 100 degree temps.  I’ve also run through twisted ankles, sickness, and on days when I was put under anesthesia for medical procedures.
Tom: One thing people always ask is whether you can “bank up” a run (run 2 miles one day and skip the next.) Nope!

What has been the hardest run of your streak?
Anne: Definitely at Red Rocks in September, 2011. After a cancelled flight and five hours of sleep in Minneapolis, we got to Vegas at about 10am and were hiking in to climb by noon. Finished the climb and had the usual descent shenannigans where it took us a while to get back to the car. By the time we checked in to the ranch where we were staying, their restaurant was going to close. So, instead of running, we ate a heavy meal…putting our run at about 11pm.  Every step hurt my stomach – it was much more awful than bad weather or feeling ill!
Tom: There was one time I was stricken with a severe stomach ailment, passed out, and actually hit my head on the bathroom floor in the wee hours of the morning. I confirmed with a nurse on the phone the next day that I didn’t have any symptoms of head trauma and got out with nothing more than a gnarly goose egg. After a lot more rest and gentle fluid intake over the course of the day, I went for a very moderate mile run that evening.

What is the most rewarding part?
Anne: This is a really tough question. It doesn’t feel rewarding anymore, it just feels like part of my life! I do love wanting to voluntarily run more than the mile, or when my step feels light and I feel like I could go forever.
Tom: I’ve enjoyed watching Anne get excited about running…and I secretly enjoy the planning to fit it into days that seem like they will be logistically challenging.

What’s been the best run of your streak?
Anne:  Ironically, also at Red Rocks!  Thanks to being on eastern time, it was pretty easy to get up at 4am every day, do our run down the silent ranch road by moonlight, then get ready and be at the gate by 6am when it opened. There was a lot of wildlife out there, so we regularly got to watch burros trot down the trail in front of us during the run.
Tom: After the Hound Ears Bouldering Competition last year, still needing to do my mile, a friend joined me on a run down the road to the entrance gate — the buses full of hooting boulderers headed back to the campground just added to the ambiance. 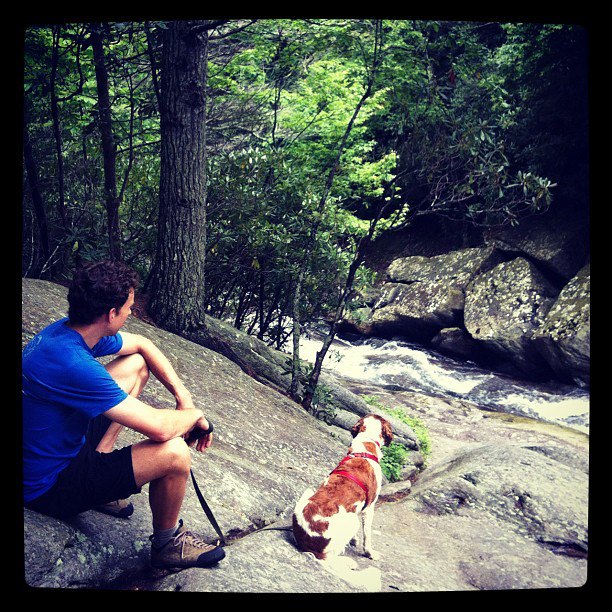 How long do you plan to keep your “streak” alive?
Anne:  I guess I’ll stop when I fail. I still don’t consider myself a runner. I am just highly invested at this point. If I fail for a day and the streak is over, I’ll probably never run again. I’m kidding. Well, I’m only partially kidding. Maybe I’m not kidding. The longer the streak gets, the more important it is to me to keep going. Starting over at zero would feel terrible, so I’ll do anything to get that run done each day.
Tom:  I guess I’m a streaker until I somehow miss a day. Then I’ll just be a streaker with a longer former streak and a shorter current streak.

What would you say to non-runners about why “streaking” is a good idea?
Anne: Here’s why the streak is awesome. There is no time limit.. if you start off running a 16 minute mile, who cares? As long as you’re running! Also, there is no other requirement beyond the mile. If you feel like just doing a mile and not a step more, that’s fine! But about a month in I am willing to bet you’ll feel so good at the end of that mile you’ll WANT to keep going.
Tom:  Just listen to your body as you get started. Since the goal is to keep going for day after day, start easy and build up to more miles (if adding miles is another goal). Your body will definitely let you know when you can run more. Be patient if you are recovering from an injury. The beauty of the mile minimum is that with such a short distance you can adapt to almost any contingency while you’re less than 100%.  I’m signed up for a half marathon in Atlanta this August and the training plan has overlaid quite nicely on the streak and on climbing!

What I love about Tom and Anne’s streak is the simplicity of it.  It’s definitely illustrates the concept of the whole being greater than the sum of it’s parts.  Looking at one day at a time, one mile might not seem that impressive – but running 759 days in a row (the current total as of today), is certainly something to be proud of! What running goals have you set for yourself this year – and would you ever consider going for a “streak”?