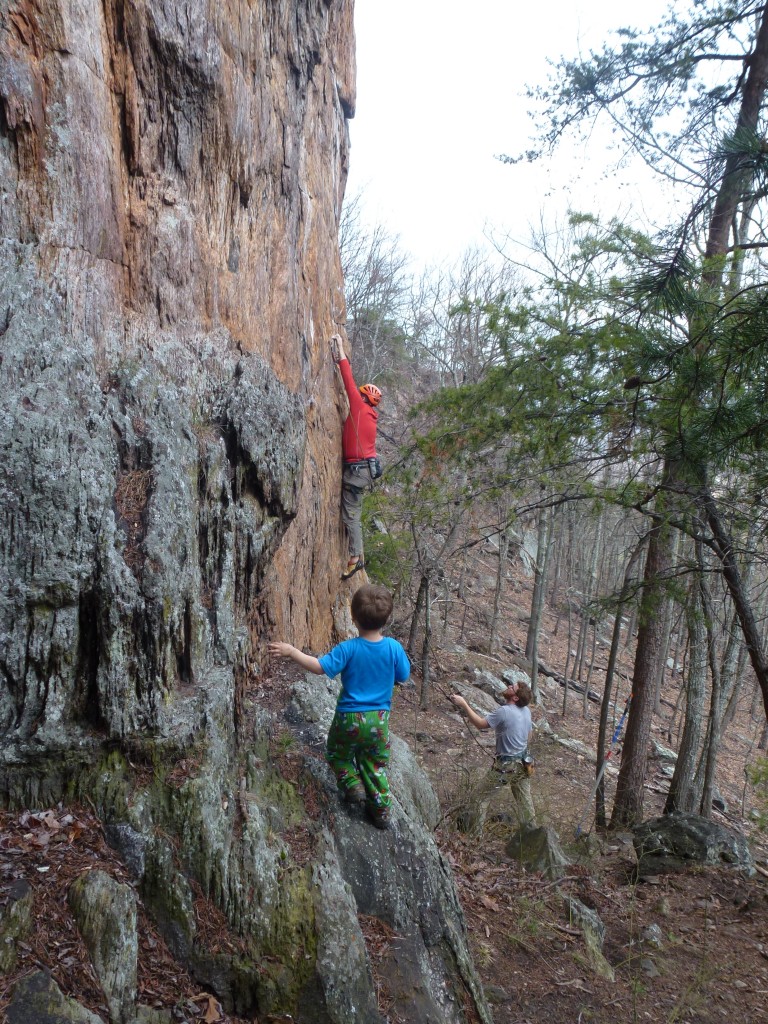 It’s been quite a while since I’ve posted a trip report.  That’s because it’s been just under a month since I’ve climbed outdoors.  Between cold and wet weather, a little guy’s birthday, and a (hopefully minor) knee injury, our weekends of late have been occupied with activities other than climbing.  So when the stars aligned just right last Saturday, our whole household was psyched!  For me, the tick list was non-existent.  My main goal was to test the knee out on some local rock before galavanting off to the Red River Gorge later in the week.  Oh yeah, and I wanted to do a climber’s style Easter Egg Hunt with the crag-kiddo!

The hubster may have put in some well-spent time on his current project (and although he walked away empty-handed I’m confident it’ll go down on his next attempt!), but my day was pretty laidback.  The knee got pretty tired pretty fast from hiking as soon as any significant weight was added (aka 35 pound toddler), but felt totally fine while climbing.  After warming up on the Rawlhide Wall, we enjoyed a beautiful spring afternoon at Red Wall.

Despite watching Steve get so close on his project (Welcome to Crowders, 5.12a), and my friend Hansen nab his second 5.11b (Desperately Seeking Juggage, 5.11b), my highlight of the day was by far the Egg Hunt.  After perfecting his egg-collecting skills at preschool last Thursday, C was primed and ready to go.  In fact, it was difficult for everyone else to keep him distracted long enough for me to hide the eggs.  The first few were scattered along the ground in typical egg hunt fashion – hiding in rock nooks and crannies, holes in logs, crooks of trees, etc.  But then we found a 10 x 10 section of rock that was littered with juggy pockets – the perfect place for a crag-kiddo to have a vertical egg-finding adventure!

The giggling started as soon as the first egg was found hiding in a pile of sticks, but C actually squealed with delight when he rounded the corner and saw a dozen eggs peeking out of all those pockets!  I must have stuffed those eggs in those pockets at least 10 times over the course of the afternoon.  Each time he filled his basket, C insisted upon hiding the eggs from us…which in reality meant just dumping them in a pile along the trail.  Clearly he doubted our egg-finding abilities, because as soon as he announced he was ready, he would take us by the hand and literally lead us straight to the eggs (“THERE’S those eggies Mommy!”). 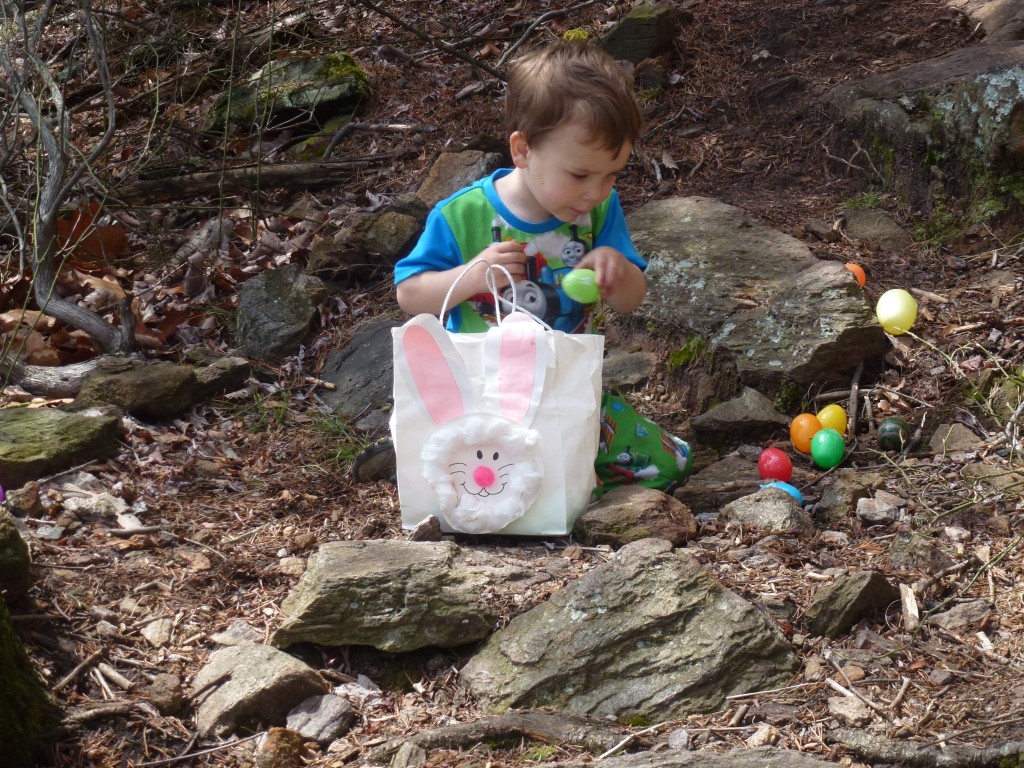 As a side note, if you’re thinking that C’s outfit of choice looks an awful like jammies…you’re RIGHT!  He got some special Thomas the Train birthday jammies last week, and he has kept them on 24/7 ever since (though I have managed to at least wash them twice).  Although we get a few funny looks in the grocery store and at the park, he’s happy so I’m happy.  I figure there are plenty more important issues to draw a line in the sand over, and clothing  choices aren’t one of them…but that’s a whole different post.

Anyway, good times were had by all, and it was nice to be able to get out and enjoy spring, especially considering the freakishly cold weather we’d been having (I was starting to think those wacky warm temps we’d had in January were all we were going to get for “spring”!)  What about in everyone else’s neck of the woods – did you manage to climb, hike, bike, run, __________ (insert your activity of choice here) this weekend? 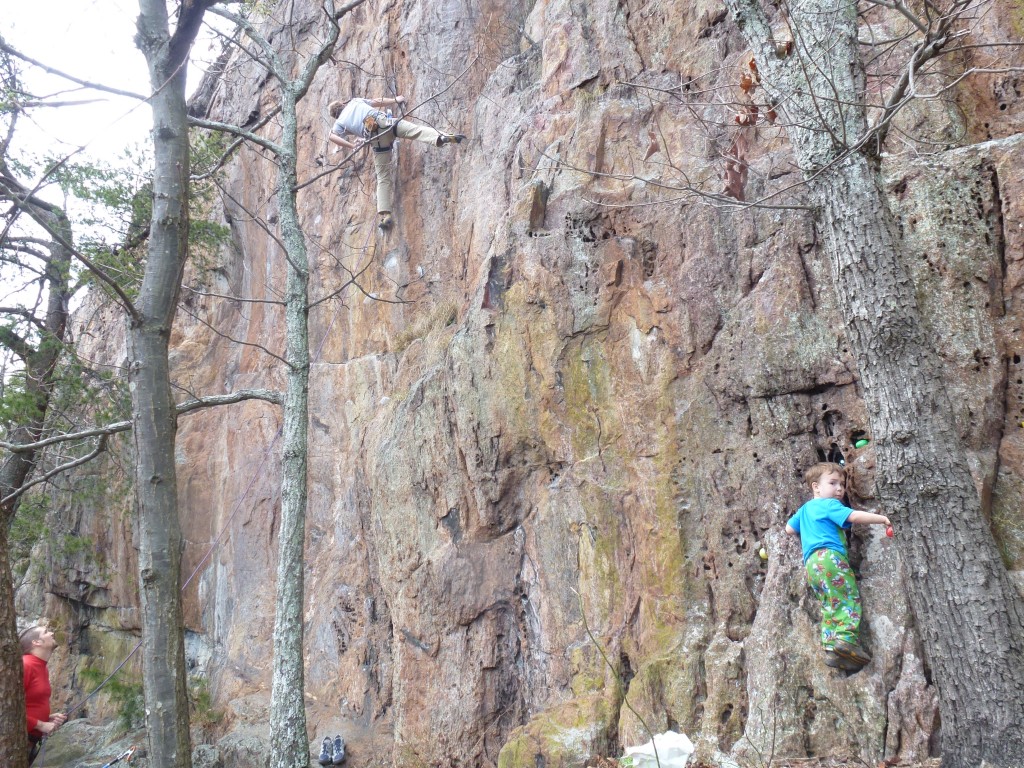