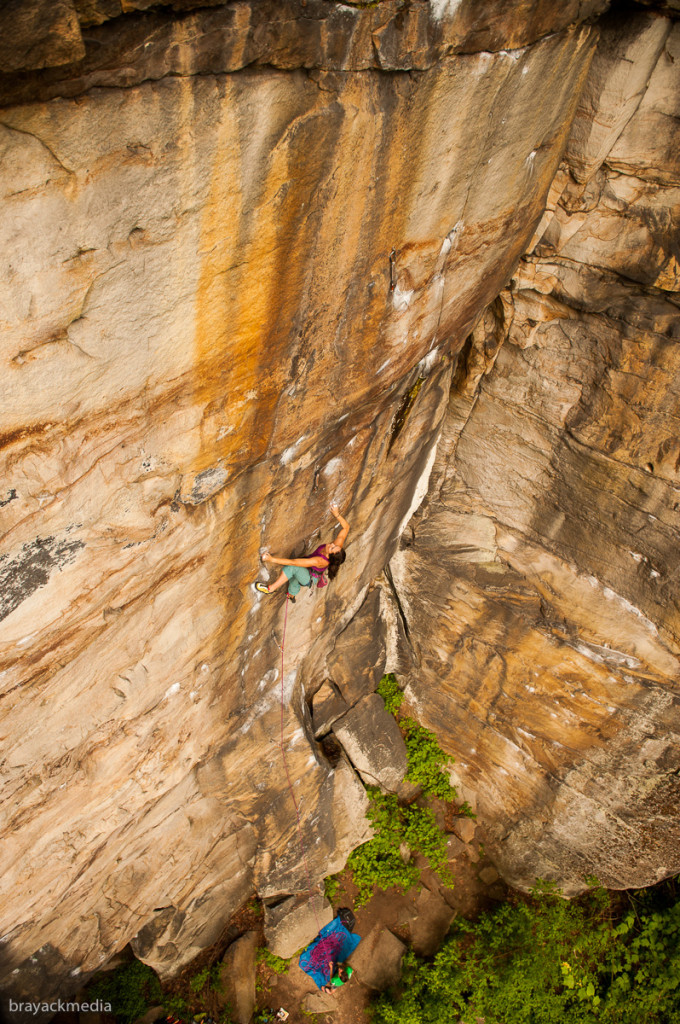 After skipping a year for the first time in 10 years, the New River Rendezvous was back and better than ever this past weekend!  For those of you not familiar with it, the ‘Vous is a climber’s festival that raises money for the New River Alliance of Climbers (NRAC).  It’s also a great excuse for the climbing community to get together and celebrate living near some of the best stone this country has to offer!   Though it was the 5th Rendezvous for Steve and I (and Cragbaby’s 2nd), it was my first time attending as an athlete for Trango, which made for an entirely different experience.

First of all, the ‘Vous started earlier for me than it had in years past – I rolled into town on Wednesday evening, and was hiking down to White Wall by 7:15 the next morning, clothed in my brightest, most photogenic articles of clothing.  I started the day off well – flashing Almost Heaven (5.10b) and Moon Child Posse (5.11c) before teammate Dan Brayack arrived ready to rig for photos on the aesthetic Thunderstruck (5.12b). 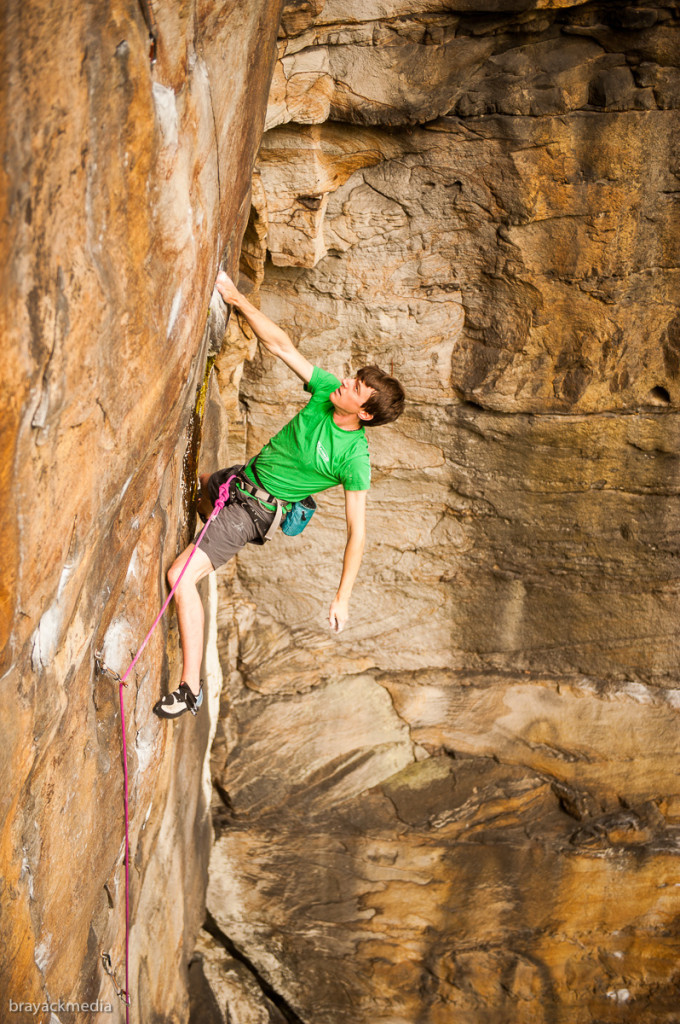 I was psyched to try this classic line, and I was feeling really strong until I got shut down hard going to the anchors.  And by shut down I mean that after a dozen fairly large whippers I finally had to send up for the stick clip to be able to clean the route.  From there we bushwhacked through poison ivy covered cliff line (fingers crossed I came out unscathed…) stopping at a few routes along the way to the  Hole, where Dan made Blood Raid (5.13a) look like 5.10.  One such route was Pockets of Resistance (5.12a), which at one point had been my nemesis until I was able to snag the send over Mother’s Day last year.  No such luck second time around though, although I at least managed to avoid any stick clip shenanigans.  At this point I started to notice a theme…everyone else sends easily while I thrash around and take twice as long…

Day 2 I was reunited with hubby and the little guy and we all trekked out to Lower Meadow for another day of photos.  Temperamental  lighting ended up dictating the routes we did, and after a quick warm-up we set up shop on the Cat Wall.  Dan shot Adam and I both on Go Cat Go (5.12b), a nice sustained line heading straight up the middle of the wall.  Later on in the day I got on Gato (5.12a), which felt significantly easier than it’s neighbor to the left.  This line had a burly start (that was literally soaked from the previous day’s monsoon) and a lot of variety – a one move crux throw off of positive  crimps, a small roof, and easy runout edging to the finish.  After I worked out the moves I pulled the rope and tried it two more times, but each time I didn’t have enough gas to make the throw at the crux.  Oh well – 5.12 and me don’t always get along at the New, so I was more than satisfied with that progress, and I think it will go pretty easily another time when I’m fresh. 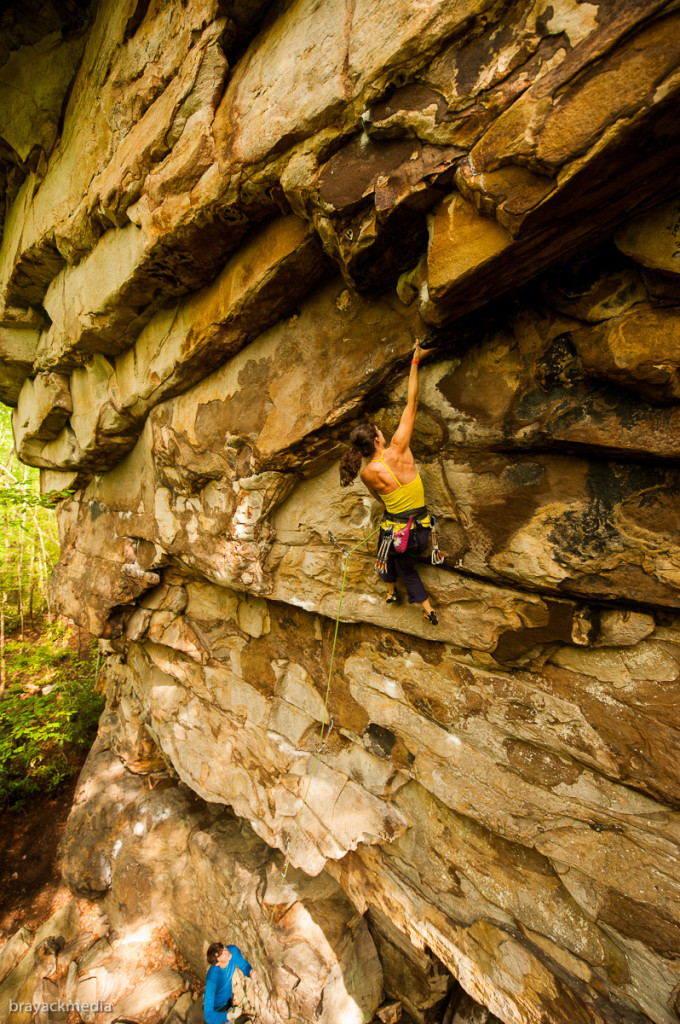 Saturday was intended to be a rest day…but we ended up giving Adam a tour de classics at Endless Wall.  We warmed up on Stim-o-Stam (5.11c) and then hit up Freaky Stylee (5.12a), another one of my dirty dozen sends from last year’s “Twelve 5.12’s” goal. But in keeping with the theme, I did NOT get the resend this weekend.  I had trouble in a random spot that I don’t remember being difficult before, but then fired the crux first go with relative ease (go figure).  That being said, when I sent it last year I felt about as desperate as you can get and it held the honor of my proudest send to date.  So even though I did fall on it this go round, the fact that I felt so secure in the crux seems like definite improvement.

I rounded out my day on Jesus and Tequila (5.12b), which I’m glad I toproped, because I would have gotten pummeled on lead.  I was actually clean for the first 4 bolts or so, but the crux moves took a lot of work, and it certainly was convenient to not have to jug up every time I fell.  I don’t feel anywhere close to sending, but it was certainly fun to play around on it. 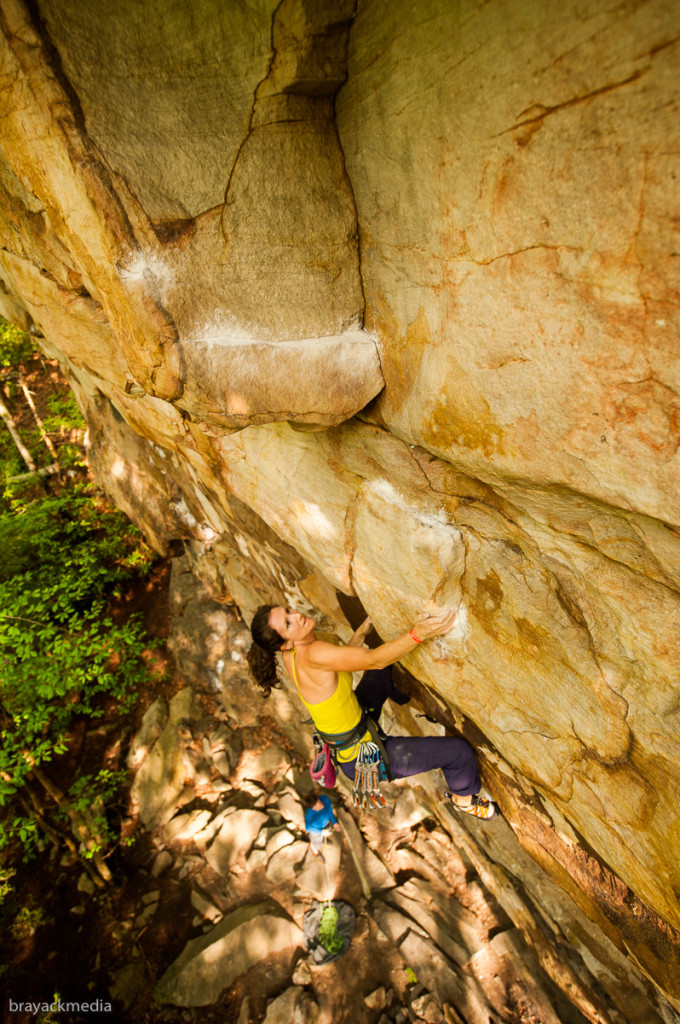 By Sunday morning I was running on fumes, as the early mornings followed by long days followed by late nights were really catching up with me.  But the sun was shining and Endless Wall was beckoning again, so away we went.  We warmed up on Strike a Scowl (5.10b), before heading to Leave it to Jesus (5.11c) to rig for photos of Dan.  We then headed over to Fern Point, where I tried my hand at Techman (5.12c), a line I had toproped a few months prior.  This time I tackled it on lead, and was able to work out good beta through the crux.  I bailed at the big move just above the 4th bolt (same place as I had bailed last time), but this time I think I figured out a sequence that will work (just not on Day 4 in the baking sun!)  I ended my weekend cleaning Mellifluous (5.11a) just as the skies opened up.

And speaking of skies, they were forecasted to be pretty gray this weekend (50-60% chance of rain each day!), but despite the late afternoon thunderstorms, we climbed on (mostly) dry rock every single day.  On paper I certainly didn’t accomplish much of anything, but lack of sendage aside, I’m pleased with how I climbed.  Ordinarily for me a 4-day trip would consist of mostly 5.10-5.11 climbing with a 5.12 sprinkled in here or there, as that’s a pace I can maintain pretty easily for several days in a row.  This trip, however, I spent the majority of time climbing at my limit, which meant great photos but crappy “statistics.”  But while I may not have been able to link much together, I did feel strong physically and confident mentally, and more than once was shocked to find myself still hanging on.  I’m pretty sure that on upcoming trips I’ll be able to send most of the harder routes I got on, provided I take them on one at a time rather than all at once. 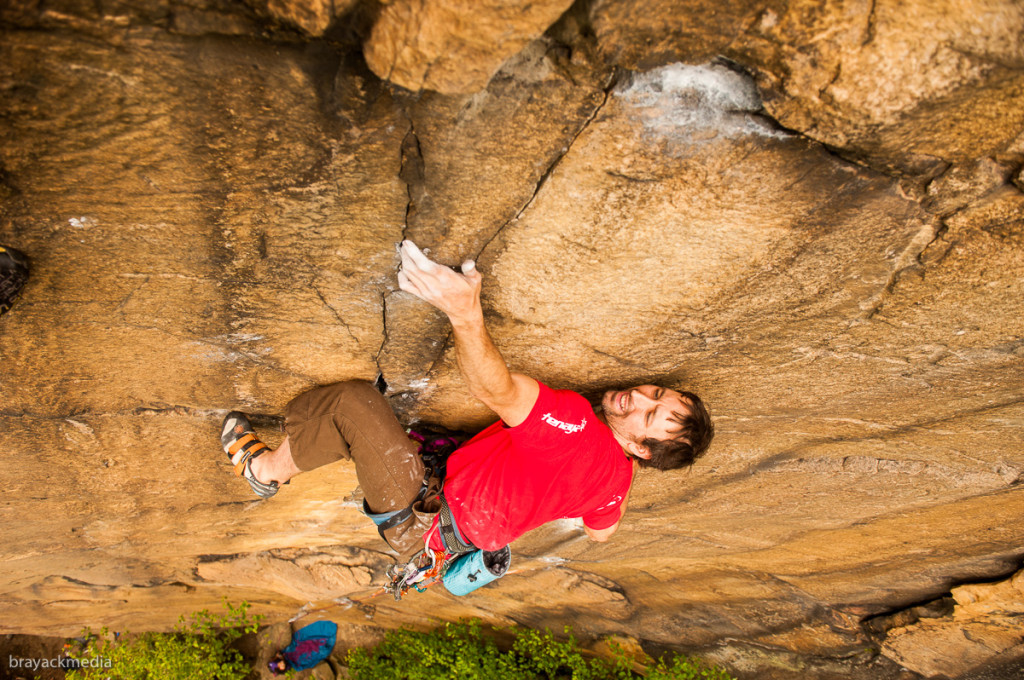 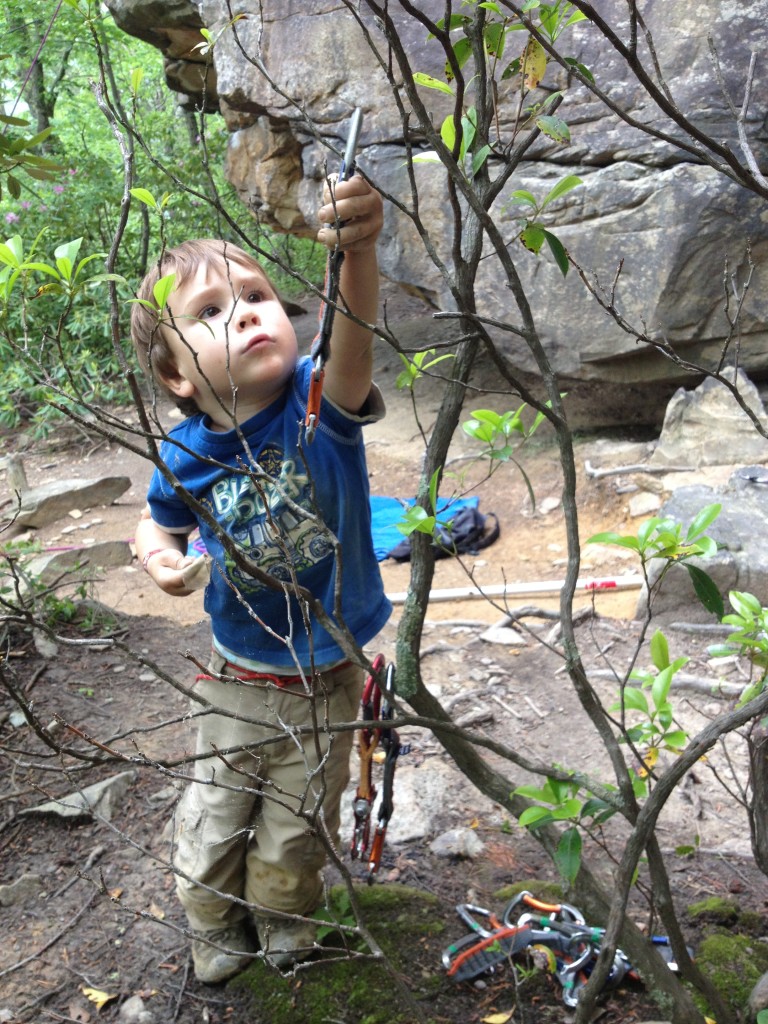 I must admit that doing the event with Trango was a pretty sweet gig – climb and take photos by day, play social butterfly at the booth by night, not to mention a few other party-like-a-rock star perks I managed to enjoy as well.  But I’d be lying if I said it wasn’t hard not being the one to tuck my little guy into bed at night, and having to slip out of the tent early the next morning before he woke up.  It was difficult shifting gears back and forth from “climber” to “mommy” and back again.  On a normal weekend it’s easy to find the balance – there’s plenty of down time in between routes for me to catch millipedes with C and scoop up moss with his bulldozers while we cheer on the rest of our friends, and we’ve got all afternoon to wander back to the car at C’s own pace, making nature observations along the way.  We knew going in, however, that this weekend would be a lot more chaotic than most, and Steve knew he would basically be playing the role of single dad for the weekend.  But although we were prepped, I still found myself dealing with a few pangs of mommy guilt here and there, most of which stemmed from pressure I put on myself to be everything to everybody.  Another time I think the best solution for our family at an event like this would be for C to enjoy a weekend at the grandparents while I took care of my outside responsibilities.  He’d get spoiled rotten, I could stay focused and guilt-free, and finding other climbing options on photo days would be a lot easier (and more exciting) for Steve.  Hindsight is 20/20 of course, but all in all I couldn’t possibly complain about such a great weekend!  Good climbing, good company, and good laughs…that’s what it’s all about, right?  😉