Historically if the weather is good (or often times even if it’s not), 90% of Southeastern climbers migrate to one of two world-class hot spots for Memorial Day Weekend – either the New River Gorge in WV or the Red River Gorge in KY.  But for 3 years running our family has chosen to head in the opposite direction to the Obed River – a smaller (but almost just as good) climbing area just west of Knoxville, TN.  Generally speaking, a “crowded” weekend at Obed is about the same as the average non-holiday weekend at the the New or the Red, although the crowds have been steadily increasing the past couple of years now that the word (and a new guidebook) has gotten out.  But while we may not have managed to avoid ALL the crowds this past weekend, we did manage to avoid the any-day-now heat and humidity for one more weekend.  With highs in the mid-70’s and just a couple of hours of well-timed rain early Sunday morning, this past weekend marked what was without a doubt the best conditions we’ve ever seen there (our last visit featured triple digit highs and thunderstorms each day…) 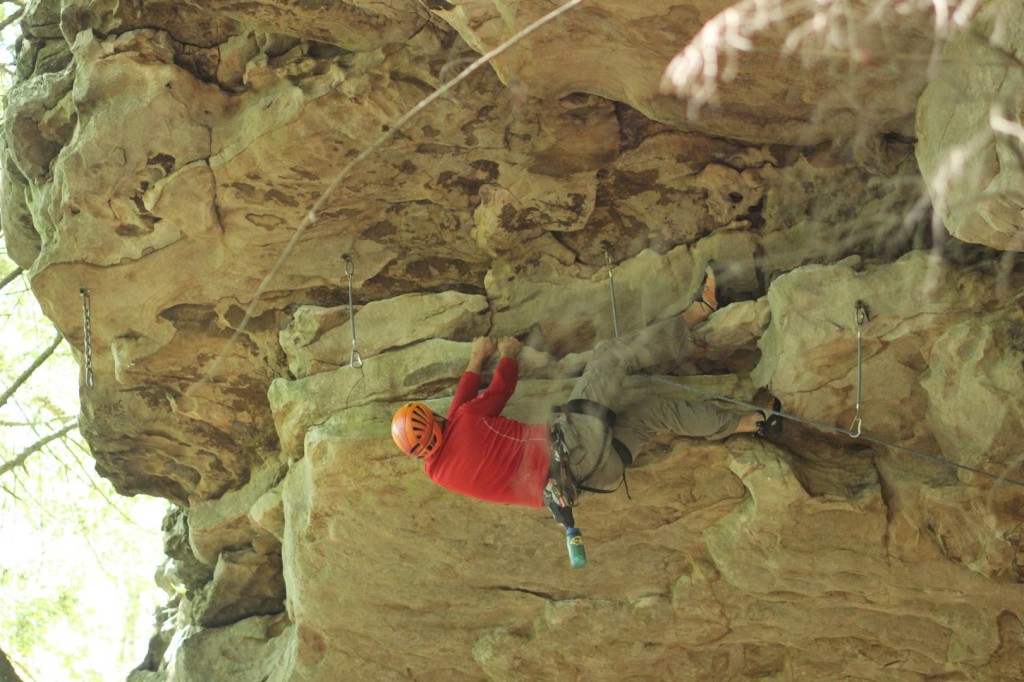 And thankfully all those sending-friendly temps weren’t wasted on us, as everyone in our crew managed to score multiple tickets on the send train each day.  Following are some highlights from each day. 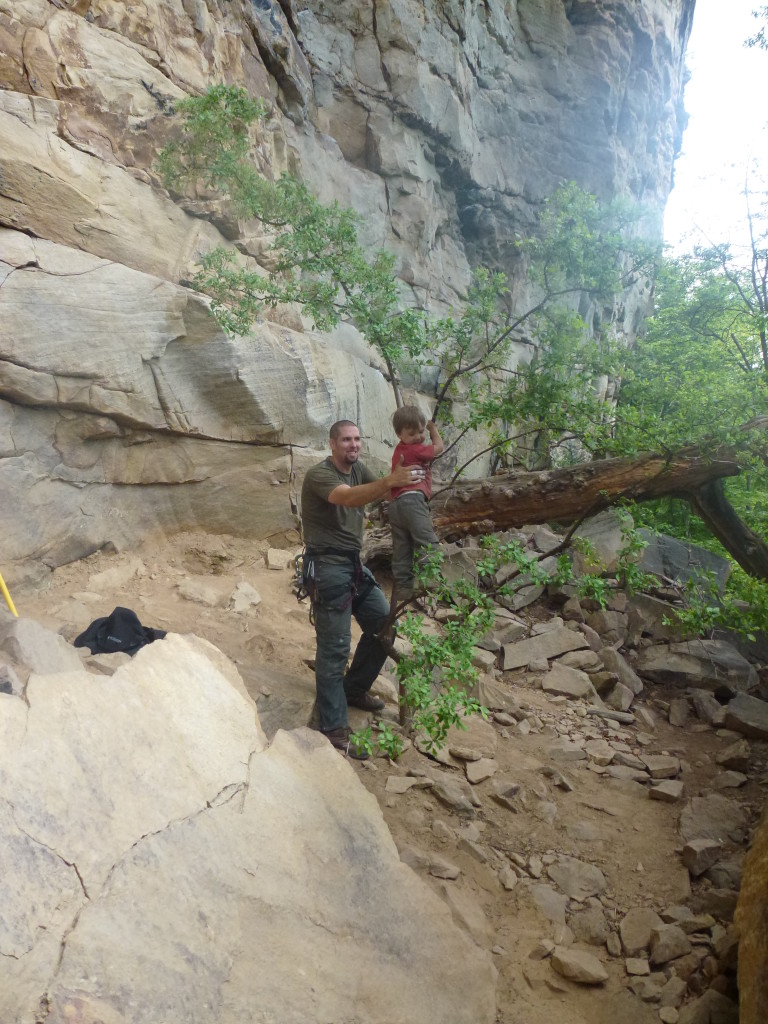 Heresy (5.11c) – Regardless of what grade you climb, this is a must-do route for the area.  A 40 foot vertical face capped by a giant horizontal roof, it’s impossible to look at it without feeling scared, eager, or both!  It’s got sentimental value for our family, which is why I devoted an entire post to Heresy after I sent it back in 2011 (and also why Steve had it on his tick list for this weekend.)  Getting on it again was a good progress barometer for me – I was psyched that this time around it felt so casual!  I was even more psyched that Steve sent in fine style on his second attempt!
Gangsta (5.12a) – This route has been the proverbial “albatross on my neck” for the past year.  I stood under it exactly one year ago thinking it was just another rock climb.  Three days and 8 attempts later (5 of which were one hangs) I realized it was far more.  Part of me was itching to get back on it the first  chance I got, the other part of me regretted ever getting involved with it.  After 3 more unsuccessful tries a few months later (again, all one hangs, falling off the SAME hold each time), I decided the best thing for me to do was to humbly and respectfully walk away, trusting that the route would go when it was meant to go.  Since then I haven’t let a route get in my head like that again.  This winter when I got frustrated at a low-percentage crux move on a local route , I recognized those emotions and walked away before letting my frustrations get the better of me.  And when a good friend of mine recently got sucked in more than he wanted to on a route at the New thanks to the “curse of the one-hang”, I knew exactly what he was feeling. 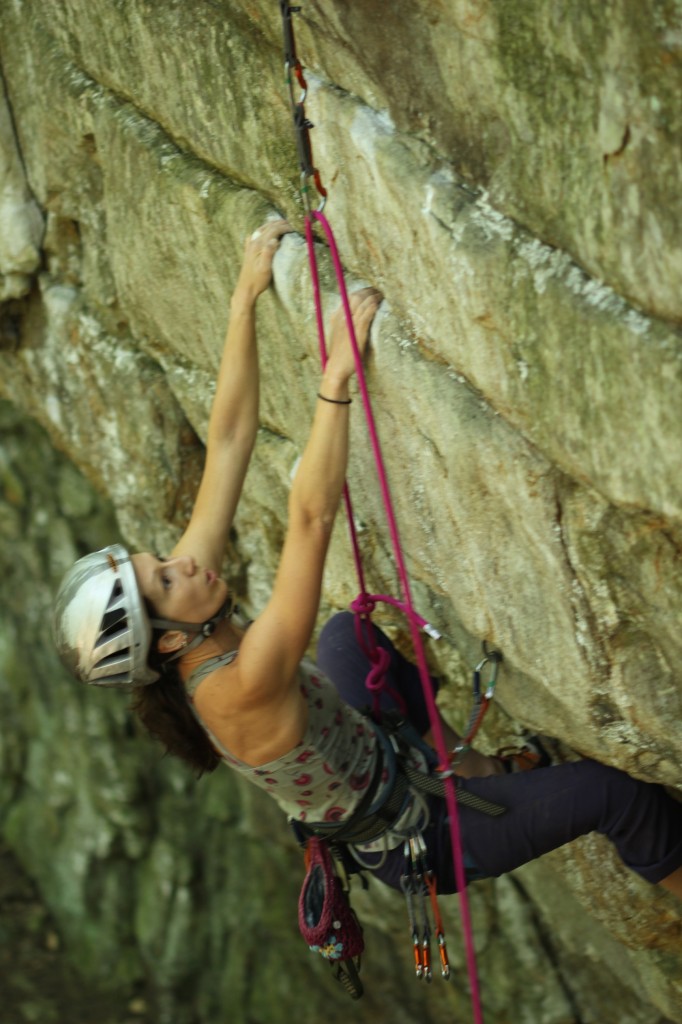 Prepping for the crux on Gangsta (5.12a)

But all the while Gangsta was lurking around in the back of my mind, and every now and then I’d catch myself trying to see if I could still remember the intricate details of the crux sequence.  This trip I really had no idea what to expect, and to be honest, didn’t really want to get my hopes up, because I was tired of always coming away disappointed.  My first attempt was (you guessed it), a one hang.  But I felt a little flutter in my stomach when I touched the crux holds – first of all, they weren’t as far apart as I’d remembered, no doubt due to improved lock-off strength from the harder stuff I’ve been projecting at the New.  Secondly, the square sloper that had always felt slimy and desperate actually felt fairly crisp and secure due to the cooler conditions.  A little bit of hope started to creep in, and I let it stay there.  I tried again a little while later, and felt strong.  I powered through the crux clean for the first time ever.  A big deadpoint move was the only thing keeping me from the 5.10 victory lap in the upper section…and I came up short and fell.  A giant wave of self-doubt came crashing over me as I slumped onto the rope.  NOT AGAIN!  I’d told myself going I was only going to try it twice but considering I actually made it through the crux clean for the first time ever I felt as if I owed it to myself to try one more time.   And the third time of the day (and lucky number 13th overall), was the charm!  I executed every sequence the right way, kept my head together for the deadpoint, and perma-grinned my way up the steep, jug-haul finish.  And just like that, it was done…

Day 2 we endured the long hike to Tierrany Wall, made even longer by a wrong turn that was clearly marked, but we were clearly not paying attention.  I took it pretty easy, sticking mostly to 5.10’s, but one of my highlights was Lifestyles of the Ripped and Heinous (5.11b), a short, powerful route that seemed “upside down” compared to most Obed routes – as in, the horizontal roof  came first, THEN the vertical face.  Pretty full value for the grade, and a whole lot of variety in just 40 feet of climbing! 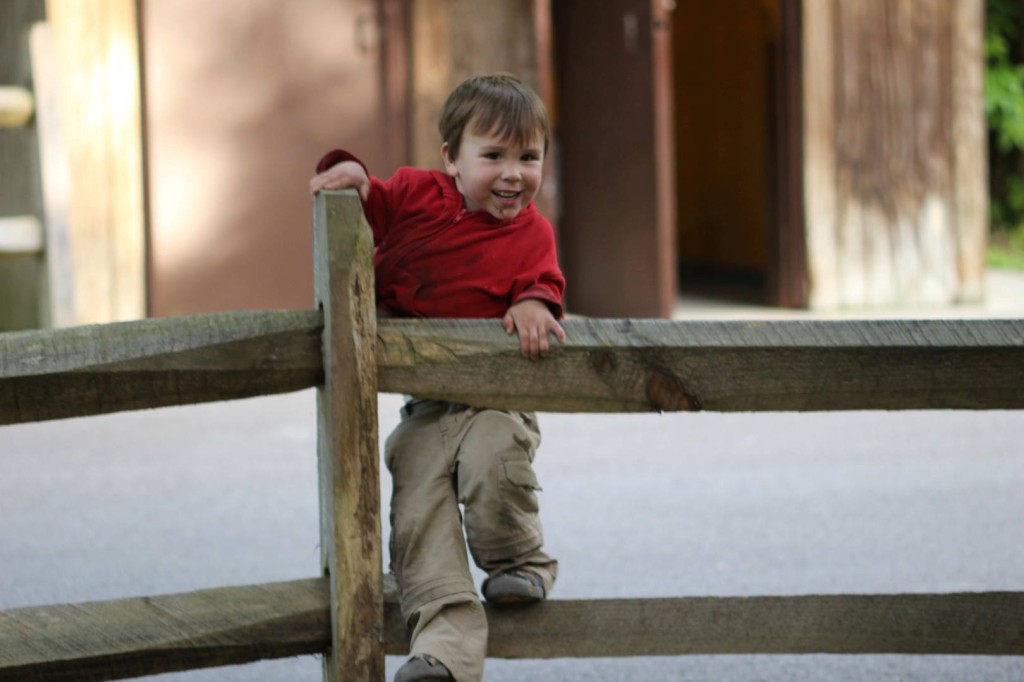 A little morning bouldering around camp

Our last day was spent in the Inner Circle at North Clear, where spirits were high but fatigue was starting to set in.  I warmed up on Keeper of the Flame (5.11d), which was a bad choice…apparently the face was a lot harder than I’d remembered it.  I managed to stay clean despite the pump, but my strength fizzled in the first few moves out the roof.  The crux went first go though, so my guess is that the outcome might feel a little different on a day when I’m feeling fresh.  The only other route I got on that day was The Rail (aka Drugbusters) (5.11c).  To be honest, I was a little bummed I didn’t onsight it, since my only mistake was coming up a tidge short pulling over the roof, but it was a really fun route so I didn’t really mind doing it again, and thankfully I sent second go.

After such an epic day for us both, Steve and I could have easily gone home completely satisfied at the end of Day 1, so another 2 days of amazing climbing with great people was just icing on the cake.  Even though I’d pushed it to the back of my mind, I hadn’t realized what a weight Gangsta had been until it was lifted.  I always knew that at some point down the road I’d send it, and I often wondered whether it would in fact be satisfying, or whether it would be more of an anti-climactic relief than a feeling of accomplishment.  But I think the words of the Geto Boys from the 1990’s hit movie Office Space sum it up best:  “Damn it feels good to be a gangsta.” 🙂