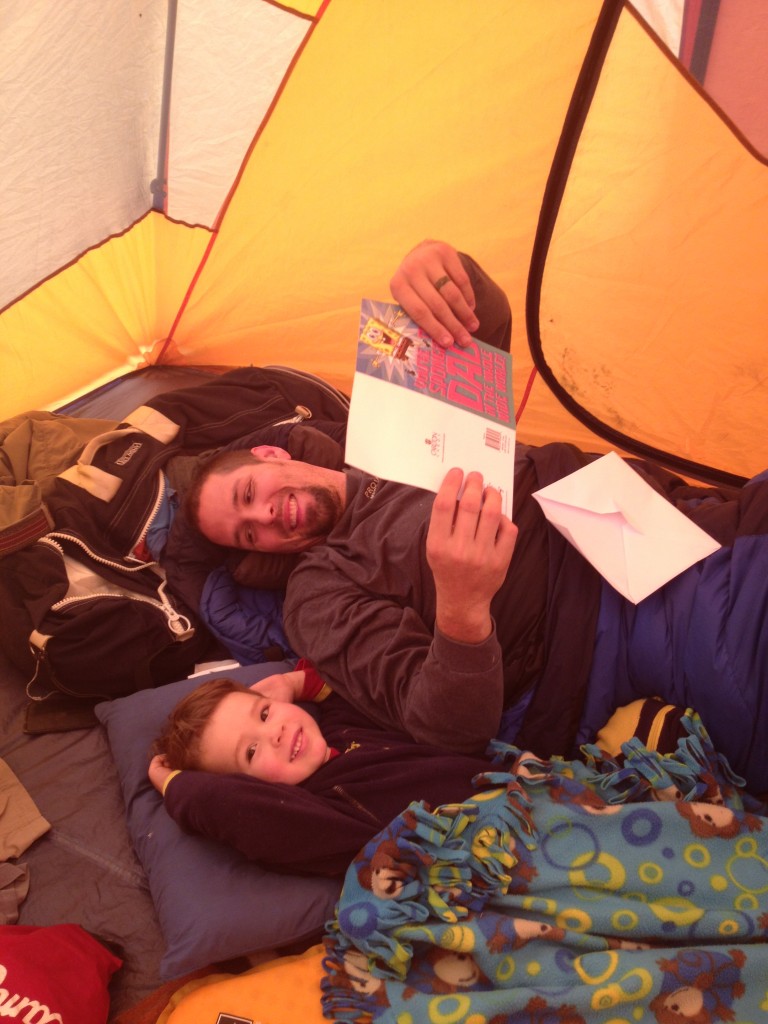 The Crag-kiddo giving his daddy some Father’s Day love!

Despite how crazy it sounds, that title pretty much sums up our Father’s Day weekend trip to the New River Gorge.   Here’s the specifics:

POOPING IN THE WOODS:  (Ok, so non-parents you might want to just tune out for this first paragraph…)  For the past two weeks we’ve been kickin’ it local style while we went cold turkey with big boy underwear with C, and this was our first weekend trip sans diapers (maybe “sans” isn’t entirely accurate…I did have a large stash of pull-ups in my bag “just in case”).  But I am so proud to say that we made it through the entire weekend with NO accidents!  While C had figured out #1 within a few days, we left town on Friday with only having one successful #2 (EVER) in the potty.  So you can imagine my shock when C took care of business as usual at the crag not once, but FIVE times over the course of the weekend.  He went from never wanting to sit on the potty for more than 30 seconds to asking to do it ALL DAY LONG!  Apparently he just needed an audience…parents of toddlers, be on the lookout for a potty at the crag post coming soon!

BROKEN BONES:  While the former climbing distraction was rather humorous, this one unfortunately is anything but.  To keep a rather long story short, a member of our crew decked on Depth Charge Saturday afternoon, fracturing his talus (same bone I broke last year).  The opening moves were easy, and Ali opted not to use a stick clip.  However, a handhold broke, sending him straight down onto a flat rock.  I saw it happen and I’m both amazed and thankful that one broken ankle is the only damage.  Thankfully we were less than 10 minutes away from the car (I can’t imagine how we would have gotten him up the Endless Wall ladders…), so we were able to get him to the brand new Urgent Care facility in Fayetteville within a couple of hours of the injury.  Ali’s prognosis is optimistically – the fracture is non-displaced, so it is unlikely he will need surgery – just a couple of months with a boot and crutches. Fortunately the rehab exercise was enough for proper healing 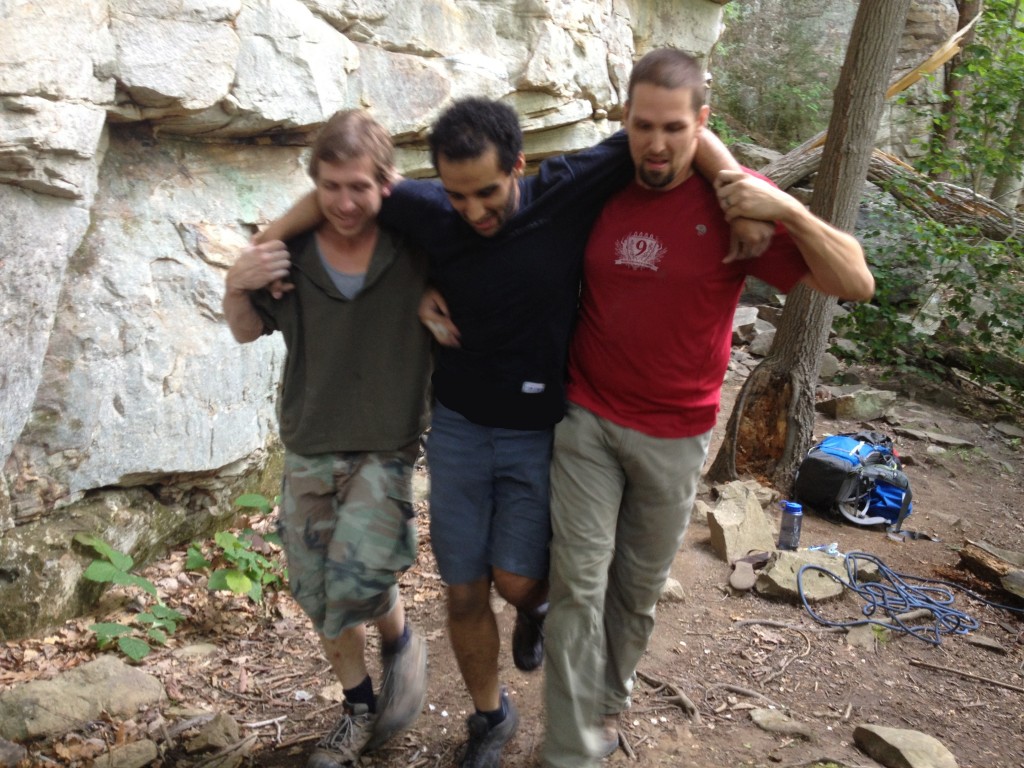 Ali in pain but still smiling as he hobbles down to the car!

CLIMBING:  Somehow in between all of the potty breaks and hours logged in the Fayetteville Urgent Care our crew did manage to get in some pretty sweet climb time.  My highlight of the day on Saturday was a second-go send of Tiggers and Airplanes (5.11d).  I’d heard folks rave about this route many times, but the intimidation factor of the roof had always kept me away (that and the notorious stopper crux just before the anchors).  But one of my goals for 2013 was to tick some steep roof lines out of my comfort zone, and this route definitely fit the bill! On my 1st attempt I was delighted to find that the roof was way easier than it looked, and I was clean all the way up until the very end…I got my feet high and went big, aiming for a chalky spot.  I slapped the chalk but found nothing but a terrible “slimper” (slopey crimper), and quickly found myself dangling in mid-air like a spider.  I jugged back up and quickly realized that the slimper was the only option for holds.  Once I figured out how to get to it (and then use it), my beta felt solid, but I had my doubts about whether I’d be able to execute it first try on a redpoint run.  And sure enough, the crux moves felt substantially harder while pumped, but just when I started to feel the elbows start to raise and the desperation set in, I managed to snag a big NRG fat roll with my left hand and stand up for the send! 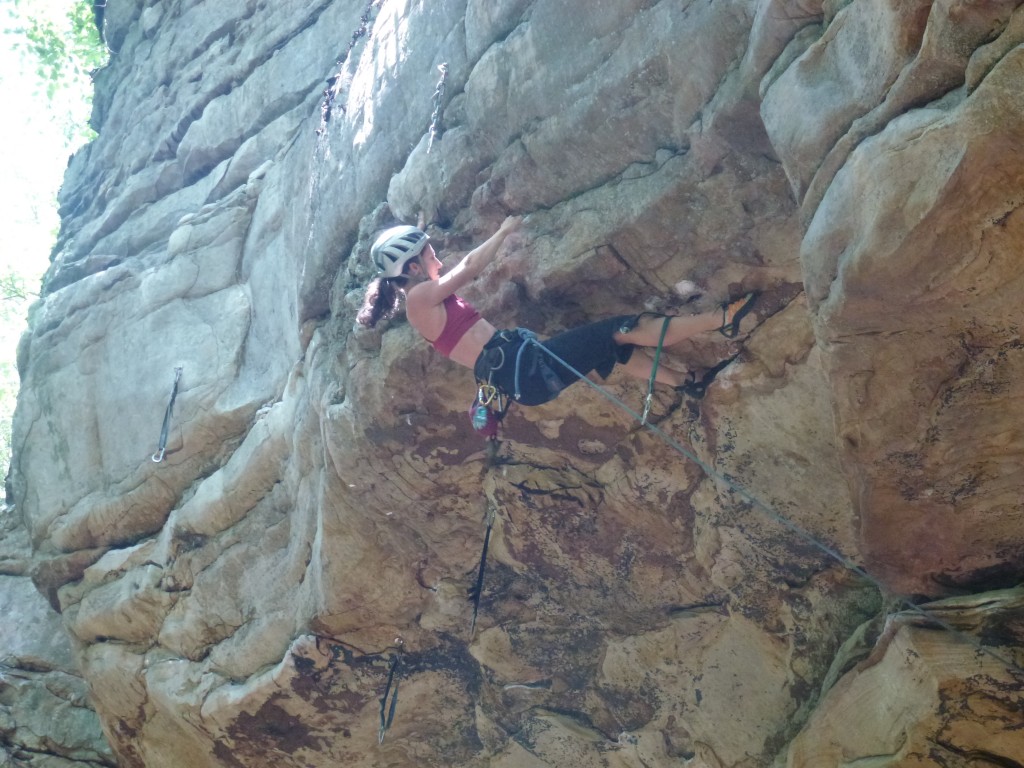 Last moves out the roof of Tiggers and Airplanes (5.11d)

Our next day was spent at Bubba City, which I hadn’t been to in years.  After a textbook sandbagged-for-shorties NRG reach move spoiled my onsight attempt of Tongulation (5.11a), I set my sights on its neighbor to the left, Likme (5.12a).  Now I’ll be the first to admit that no one in our crew knows anything about bolting, but we do have plenty of experience climbing over bolts using almost very similar Static line which we have on the roof of our workspace building, and that is why we all felt like the bolts on this line were in odd places, creating some scary fall potential.  After my friend Caleb had some epic stick-clip shenanigans getting the draws in I opted to work the route on toprope rather than lead.

The moves are fun, and require very intricate beta – mostly involving delicate, technical footwork, with a couple of power lock-offs sprinkled in here and there.  I felt much more at home on this type of terrain than on the steeps, so it didn’t take me long to work out the moves on my first run.  My second attempt I was down to a one hang (in a safe spot to fall at), so after a lot of deliberation I decided to go for the redpoint.  The crux is well-protected, but there’s some serious business in between the 2nd and 3rd bolts – the climbing is only in the 5.11- range but involves some committing moves significantly above and pretty far to the right of your second bolt.  While all of this happens high enough off the ground to avoid ground fall, pendulum swinging into your belayer is a definite possibility.  Needless to say I was a bit apprehensive on my redpoint run.  But I did exactly what my I’d rehearsed on toprope, and made it through the lower sections uneventfully.  All I had left was the crux, which I’d always done first go, and felt really confident about…so I have no idea why I fell.  This time I had the height, but started falling away from the wall before I could snag the hold.  My guess is that I was either too tired or not focused enough to keep my core engaged the way it needed to be to make that move.  After an exciting (but safe) fall, I finished up the rest of the route without trouble.

I’d be lying if I said I wasn’t disappointed.  The adrenalized part of me wanted to pull the rope and try again right away, but we had already stayed later than anticipated, and thunder clouds were starting to roll in.  The rational part of me knew I shouldn’t press my luck another time, especially considering the events from the day before.  So I turned around and hiked out, thankful that my “failure” allowed me to walk away, and deep down realizing that having a clear understanding of the limits of your personal risk assessment is never a failure, but an invaluable lesson that we can’t be reminded of enough.

While the weekend was full of the unexpected, much of it was still spent laughing and having fun with my favorite people, so in that regard, it was great!  My guess is that my friend Ali might have a different perspective though, so feel free to leave him a nugget of encouragement in the comment section below to give him to focus on while he heals up.  (And please remember to stay positive – while yes, a stick clip would most certainly have prevented this accident, Ali is a knowledgeable climber who made an educated decision based on his own personal risk assessment – so please keep your comments positive and judgment-free.)

4 Responses to “Pooping in the Woods, Broken Bones…oh, and a little bit of climbing too.”