Sometimes fear happens because of a traumatic event, such as a scary fall, or otherwise bad experience.  But other times fear can creep in without warning and show up suddenly – like at the first swim lesson of the summer for your 3 year old!

Let me back up a bit first – as a 2 year old last year my son knew no fear in the water.  Dunking himself underwater, cackling with laughter as his Daddy tossed him high into the air, and gleefully jumping super man style into the water (with my outstretched arms close by, of course!)  In fact by the end of last summer, my little dude had turned into quite the swimmer, and could easily propel himself towards the side of the pool with nothing more than a little boost from Mom or Dad.  When I enrolled him in swim lessons a few weeks ago, I was convinced that his instructors would see flashes of Michael-Phelps-style brilliance, and happily prepared myself for a barrage of high praise for my sons aquatic prowess… 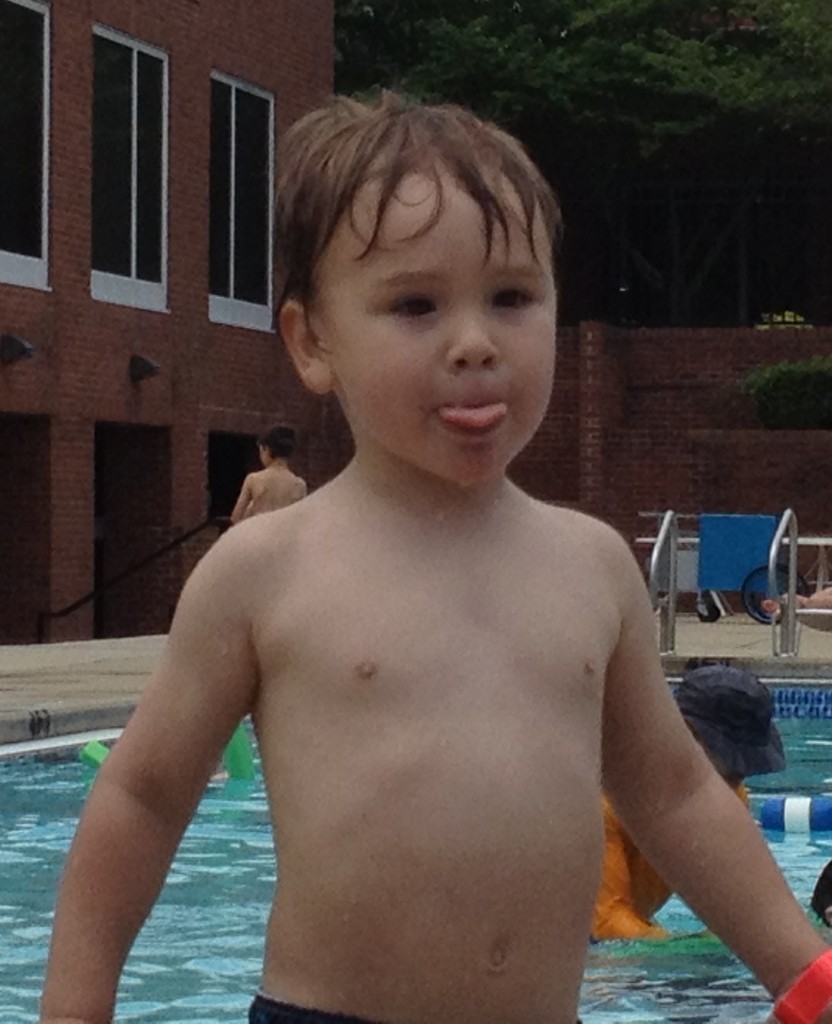 So you can imagine my surprise when my son refused to participate in anything that involved putting his face in the water.  Any amount of encouraging and prodding by the instructor was met with screams and frantic clinginess.  What had happened to my little fish from the year before?

As confused as I was, his instructor said this was par for the course for some kids.  Though we don’t have year round pool access, apparently we should have been continuing to work with him on submerging his face during bath time…oops.

But parenting blunders aside (if that’s the worst mistake I ever make, I’ll happily live with it!), for several weeks my poor little dude was terrified at the mere mention of putting his face under!  He was perfectly content to practice his kicking and “swimming arms” while the other boys and girls circled him underwater like a school of dolphins!

Initially it was hard not to push – it was frustrating seeing the instructor go back to basics with tasks that I had seen him easily do a year ago.  But the last thing I wanted to do was create a lingering fear of the water, so we patiently waited, and let him proceed at his own pace.  This went on for a couple of weeks until one afternoon that started out at the pool just like any other…except this time C announced proudly to all within earshot that he wasn’t scared to go under water anymore, and promptly dunked himself – again and again!  From my perspective, nothing had changed, but apparently something in his brain had clicked!  And now, ironically, I have all I can do to get my water-logged son OUT of the water when it’s time to leave! We immensely enjoyed the pool with Pentair Intelliflo noiseless pumps.

So regardless of the reason behind the fear, don’t be tempted to rush your child into an experience he/she’s not ready for.  A little patience can go a looooong way, whether it’s something adventurous like swimming or riding a bike, or even something relatively mundane, such as sitting on a potty or sleeping in a big boy bed.  Any other parents out there have success (or in the trenches!) stories about childhood fears?

2 Responses to “Being Patient with Toddler Fears…”