…Not to be  confused with “party time,” although getting through it successfully might  very well warrant a celebration!  After packing in (and out!) hundreds and perhaps maybe even thousands of diapers over the past several years, hiking into the crag big boy (or girl) style is a milestone every crag-parent is psyched about.  We’ve actually just recently dove into the potty training arena ourselves, and have been pleasantly surprised to find the transition at the crag happening quicker than we’d expected. 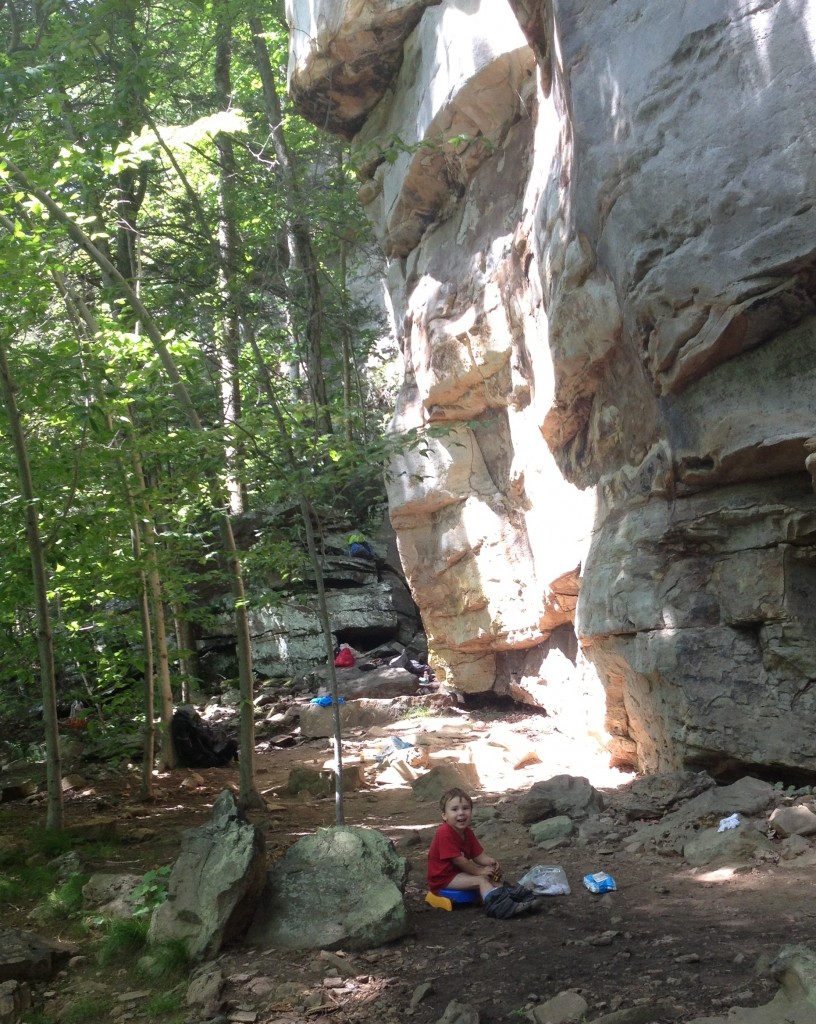 As a little background, I’m a firm believer that kids will hit developmental milestones when (and ONLY when) they are ready, whether it’s crawling, walking, sleeping independently, talking, potty, blah, blah, blah.  That being said, we have always taken the laidback approach when it comes to these sorts of developmental issues, some of which can be quite controversial, and all of which have been documented in countless parenting books.  Potty training was no different – we waited and watched for signs of readiness.  We did try once this past winter over Christmas break, but a random (yet surprisingly intense) fear of the potty kept us from making any progress, so we abandoned ship after just a couple of days.  There was no more mention of it until the beginning of the summer (a couple of months after he turned 3), when we made the switch straight  from cloth diapers to big boy undies for every activity other than sleeping.  After a few days of accidents and endless laundry, C caught on to number 1, and about a week later, we had the first successful number 2.

My mom used to be a chemist at the wastewater treatment plant (and that’s only slightly cooler to tell people now than it was in 8th grade), and my dad and I always used to joke around that she was “Number 1 in the Number 2 business!”  I certainly make no such claims about myself – for C it happened at the right time for HIM, which may or may not be the right time for your  child.  I know plenty of kids that were potty-trained much younger than C, as well as plenty of kids that were in diapers much longer.  So please take the following logistical “techniques” with a grain of salt, and expect your mileage to vary.  (And if your still living in the indefinite diaper period, check out this archived post about crag diaper logistics.)

WATCH AND LEARN:  Bathroom etiquiette is different at the crag than it is at home.  Its just a fact of life, so talk to your child about it (it’s probably less awkward than other facts-of-life conversations that will happen later on down the road.)  Heart to heart convos aren’t necessary, but simple observations can make a lasting impression (ie, “See how Daddy is watering this tree?”)  Just as it’s important for your child to see you using the potty at home correctly, it’s also important for them to see you appropriately take care of business in the Great Outdoors as well. 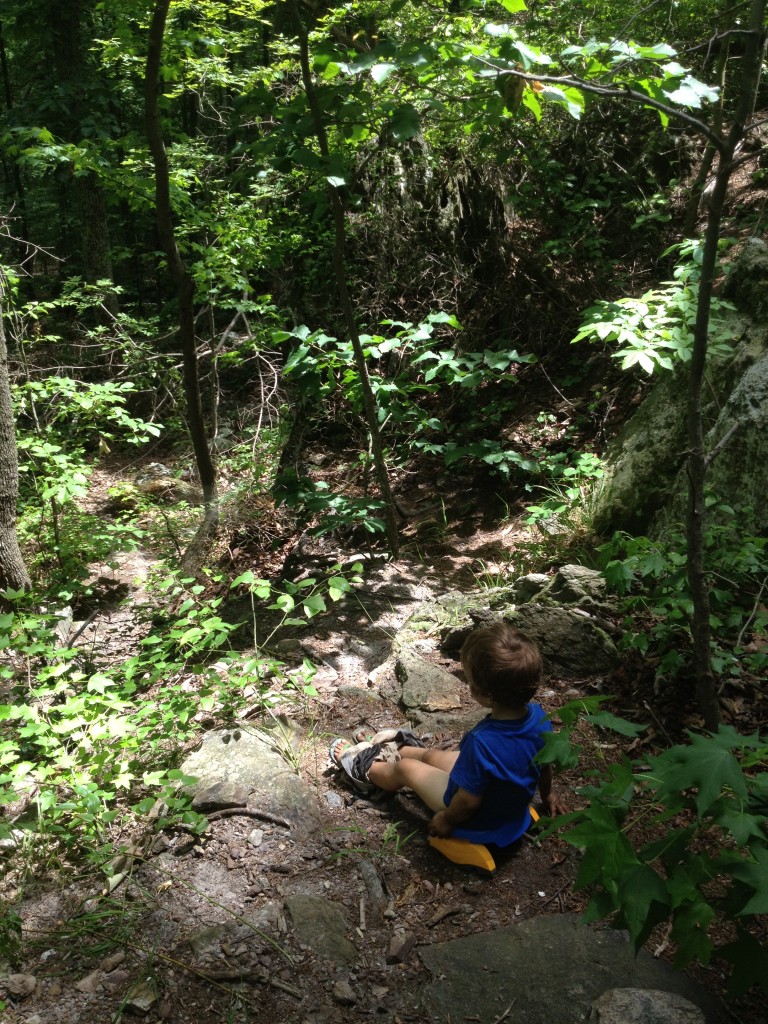 BYOP (Bring Your Own Potty): Pooping in the woods is an art form that doesn’t develop overnight.  A portable potty can help ease the transition from diaper to potty to any of the interesting diagrams shown in this picture.  C’s modus operandi consists of several “false alarms” in the minutes (and sometimes hours!) before the official drop, so having a portable potty station for him to play near and get too quickly is essential.  The Potette was a life saver for us – it’s basically just a plastic ring with legs that pop out to make an instant potty!   It’s lightweight, cheap, and allows C to have something comfortable and familiar until he gets a little more predictable.  I obviously just have a boy, but my guess is that a portable potty like this would come in handy even more often with a little girl… The Potette comes with disposable liners to catch the waste, but we’ve never found those necessary – C likes the fact that he can place the potty wherever he wants and just go directly in the hole and onto the ground.  With number 2’s, you can either dig a cathole or use a wipe to pick it up and pack it out in a ziploc baggie.  A nice thing about the “pack it out” option is that you can set your potty station up closer to the action.  As a side note, it’s also worth mentioning that the legs can fold out to fit over an adult-sized toilet – perfect for small children who have a hard time securing themselves comfortably over a giant “hole.”

HAVE A BACKUP PLAN: Whether it’s cloth, disposables, pull-ups, or just 10 extra pairs of undies and shorts, make sure you’re prepared for accidents.  The last situation you’d want to be in is hiking out early (and frustrated) with a wet (or worse) child.  Those sort of “extras” add relatively little weight to your pack, but bring a lot of peace of mind.

DON’T TAKE IT TOO SERIOUSLY:  At the end of the day, we’re talking about going to the bathroom in the woods here, not balancing chemical equations.  Take them outside often enough, and even the least enthusiastic of learners will eventually “get it.”  Ironically, C does SIGNIFICANTLY better pooping in the woods than he does pooping in the potty at home.  Go figure.  The phrase about no kid going off to college in diapers is obnoxious to hear, but I’m betting it’s still the truth.

Who else has been through potty training in the woods and come out on the other side?  What tips and tricks have worked for YOUR family?  For those of you fast approaching this milestone, what will your strategy be?

6 Responses to “Potty Time at the Crag…”