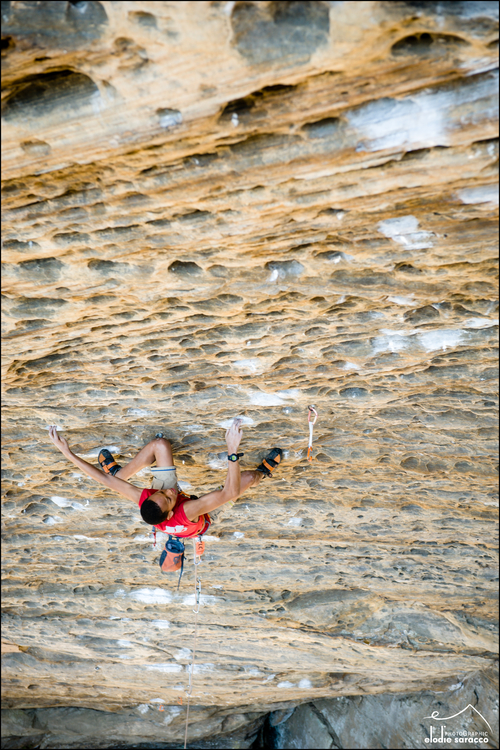 I’ve interviewed a lot of climbing families over the last couple of years, and all of them have had one thing in common – the kids learned from their parents…that is, until I interviewed the Lightners.  The story of university professor Constance Lightner and her 13 year old climbing champion Kai is as different as it is inspiring.  Kai has competed for  several years in both indoor sport climbing and bouldering, with a host of 1st place finishes at a national level.  In fact, just over a week ago he was crowned National Champion yet again at the USA Sport Climbing Series event in Atlanta!   But although he got his start on plastic, he’s slowly but surely been getting more and more mileage outside on real rock.  In fact, so far in 2013, Kai has sent four 5.14’s, including Southern Smoke (5.14c) at the Red River Gorge.  Kai’s accomplishments have not gone unnoticed either – each subsequent send was blasted over climbing social media websites everywhere, and before we knew it, a young man that was a household name on the indoor circuit began earning some street cred in the outdoor world!

My first  connection with this unique family began loosely many years ago at Triangle Rock Club, which was our home gym at the time.  Connie would regularly drive Kai up from Fayetteville, NC, and the endearing coaching and encouragement she offered up while Kai was climbing was very memorable.  Not yet a parent at the time, I couldn’t help but smile as I watched their family dynamic.  But it wasn’t until a couple of months ago at the New River Rendezvous that I got a chance to officially introduce myself.

It had been a couple of years since I’d last seen Kai, and like most adolescent boys, he’d done a whole lot of growing in the mean time, as he seemed at least a foot taller than I’d remembered him!  As he reached out to shake my hand, I noticed two things right away – first, that he shared his mama’s beautiful smile, and secondly, that he had arms that went on for days (seriously this kid’s ape index must be +5 or something!)   Though the rain had held off, sending conditions hadn’t been great that day, but you’d never have known it from talking to Kai – he was just psyched to be outside climbing with friends.  Connie, though also all smiles, was good-naturedly commenting about  the heat and humidity, and it suddenly dawned on me how unique the Lightners’ climbing journey has been from so many other families… 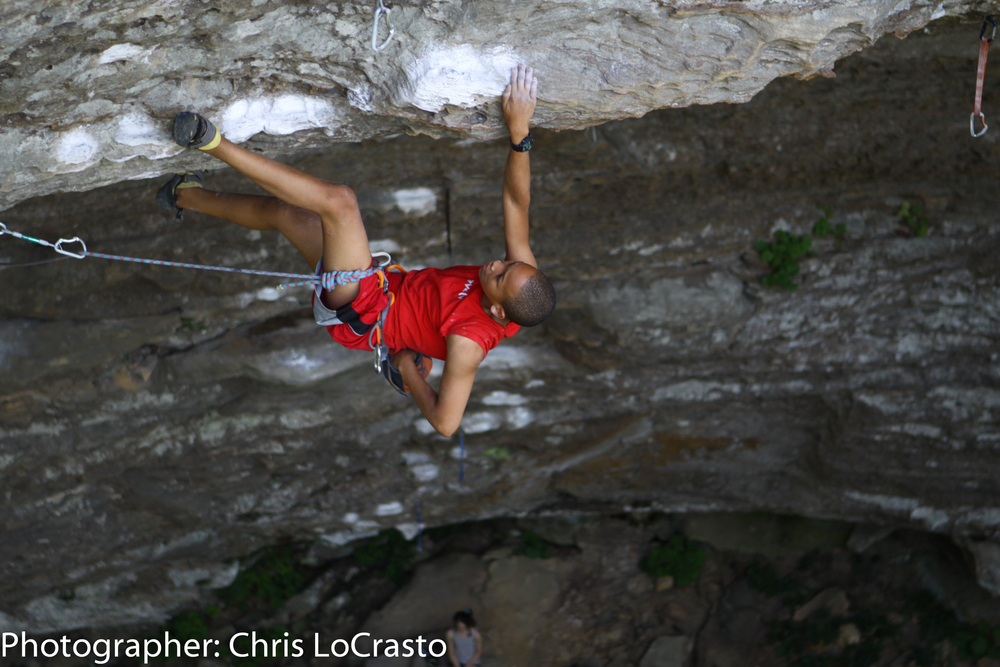 You see, most climbing kids get it honest – they grow up with one or both parents that climb, and assume that weekends spent at the crag are how every family recreates.  Eventually there is a natural progression from observing at the base to actually climbing rocks.  But Kai’s’ story is different.  Where it came from, who knows, but it certainly wasn’t from Connie!  Connie affectionately remembers threatening  “KAI! Get Down!” from wherever he was, be it up a tree, on top of a basketball goal, or once even the outside of a 4th floor balcony!  At the suggestion of a friend, Connie finally relented and took him to a local climbing gym, and both were pleased – Kai could give in to his urges to climb, but in a safe, controlled environment.

With regards to Kai’s ever-emerging talent, Connie says, “I think I was the last one to the party…People had commented on Kai’s abilities for a while, but I always downplayed it…Within the last year I have begun to realize that he has a real passion and talent for the sport.”  And Kai’s passion certainly takes a lot of commitment and sacrifice out of both of them.  According to Kai, he doesn’t end up with a lot of non-climbing time –  “It’s usually school, homework, working out, and climbing.  Luckily, I really love climbing and my climbing friends so I often get to mix training and fun time.” 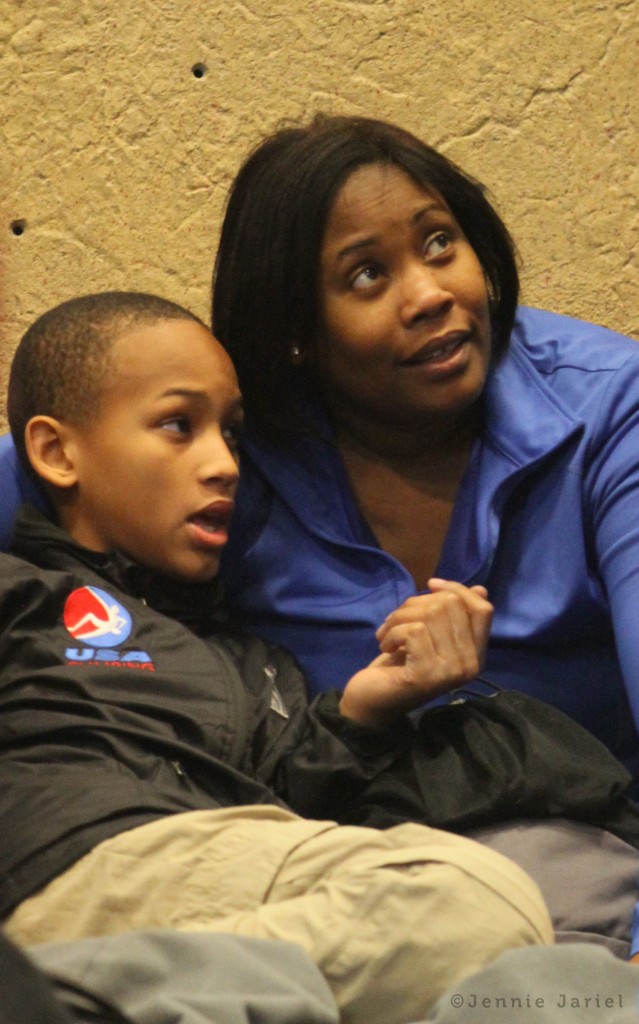 But as hard as Kai works, most impressive to me as a mother are the sacrifices Connie makes for her son, namely time and money (“He gets all of both,” says Connie.)  Holding down a full-time job while being a single mom to a teenage boy is hard enough…now add to it 2-3 evening per week of training an elite athlete!  Not to mention that most weekends they go out of town to practice endurance and onsight training at other gyms.  Connie confessed that her biggest challenge was time – “I need 4-5 secret hours during the day that no one knows about!”

Kai is quick to show appreciation for his mom’s important role in his success.  “My mother is always the one who gives the most motivation and support, whether it’s at a competition or on a climb that I’m having a hard time completing. She’s always the one who drives me to all my events and the one who hikes up the mountains with me, even when she doesn’t want to hike (which is all the time).”

Yeah, and speaking of hiking up mountains, now that Kai’s interests have gone outdoors, so has Connie, who is admittedly building up her “outdoor stamina.”  Previous years the family would spend only just two weekends per year outdoor climbing, but this year Kai and his mom have already logged 5 multi-day trips between the New and Red River Gorges.

But despite the hardships and struggles, Connie wouldn’t have it any other way –  “I love watching his face and excitement when he achieves goals that he has set.  I must also admit that I love the really big hugs that he comes to give me immediately after untying from a successful climb.”  But that doesn’t mean she’s itching to tie in herself.  When I asked if she and Kai ever climbed together, the answer was an emphatic NO!  “Calluses and pumped forearms do not interest me,” said Connie, who’s professional climbing skills will apparently remain limited to belaying.  🙂

As for Kai and what’s next, the sky is really the limit!  I have no doubt that a young man as determined and focused as he is can achieve whatever he wants in life, both on and off the rock.  When asked what he wants to be when he grows up, Kai was quick to respond, “I either want to be a lawyer, like Michael Lamonsoff, or start a business in the climbing industry.  I know those are totally different paths, but I think I would enjoy both.  I love debating and speaking, but I would also enjoy combining my love for climbing with growing a business in the community.”

For more info on Kai and his accomplishments, you can visit his website here, and/or check out this very well-written article about him in Deadpoint Magazine.  A big thanks to both Kai and Connie for giving me a glimpse into their not-so-stereotypical climbing life.  While it may look a lot different than my own, I love how climbing brings people together.  If you enjoyed the Lightners’ story, please leave them some love in the comments below.