I suppose in some ways, even “planned” babies are still a surprise…We’d been in the “not TRYING but not NOT trying” stage since the spring, so seeing two lines on a pregnancy test shouldn’t have been such a shock.  But I probably stared at those test results in utter disbelief before walking out of the bathroom and putting my harness  on (because of course I’d stopped to pick up a test on my way to the climbing gym…and then of course I couldn’t wait til I got home to take it…)  I won’t lie, my initial reaction involved a lot of fear –  How could I possibly love another human being as much as I love C?  Can we really handle two?  Will we ever  climb again?  What have we done?!?!?!?!?  But by the time I had shared the news with my “Baby-Daddy” and gotten a good night’s sleep, I woke the next day with that giddy peaceful feeling that comes from knowing you’re in the right place.  Though at 12 weeks I still have a few more days left before I’m officially in my 2nd trimester, most of the 1st trimester ickies have faded substantially, so to celebrate I thought I’d catch you guys up on all that’s been going on (and why there hasn’t been anything worth “‘trip-reporting.”)

Hard to believe something so little can affect so much!

Weeks 4-6:  So, so tired.  Like, soul-stomping, bone-crushing tired.  One night I slept a solid 12 hours and STILL managed to be late for a 9:00 appointment!   I feel bloated, crampy, and just generally “off.”  Being in the heat completely ZAPS every ounce of energy I have.  In fact, a hot July run that left me feeling dizzy was one of my first clues that there was a bun in the oven…

Weeks 6:  Hello nausea!  Though I never really had any with C, I’m now finding that  I spend the majority of the day trying to figure out whether I need to eat, go to the bathroom, or throw up.  Thankfully, the latter has yet to happen.  I randomly discovered that watermelon and pineapples (good for me!) and soda (not so good!) help to ease the off and on nausea.  At 6.5 weeks we went to the New River Gorge.  There was no trip report because I sent nothing besides the warm-ups.  Ironically I felt fairly strong – I got several moves higher on Lost Souls (5.12a) without falling than I ever had before, and each individual move felt a lot easier than I’d remembered! (It had probably been a year since I’d been on it.)  But my endurance is shot, so there’s no way I could think about linking the whole thing together right now.  I’m still lead climbing – at this point the baby is no bigger than a pea, and very well-protected deep inside my uterus.  That being said, however, I’m sticking with closely bolted routes and clean fall zones. 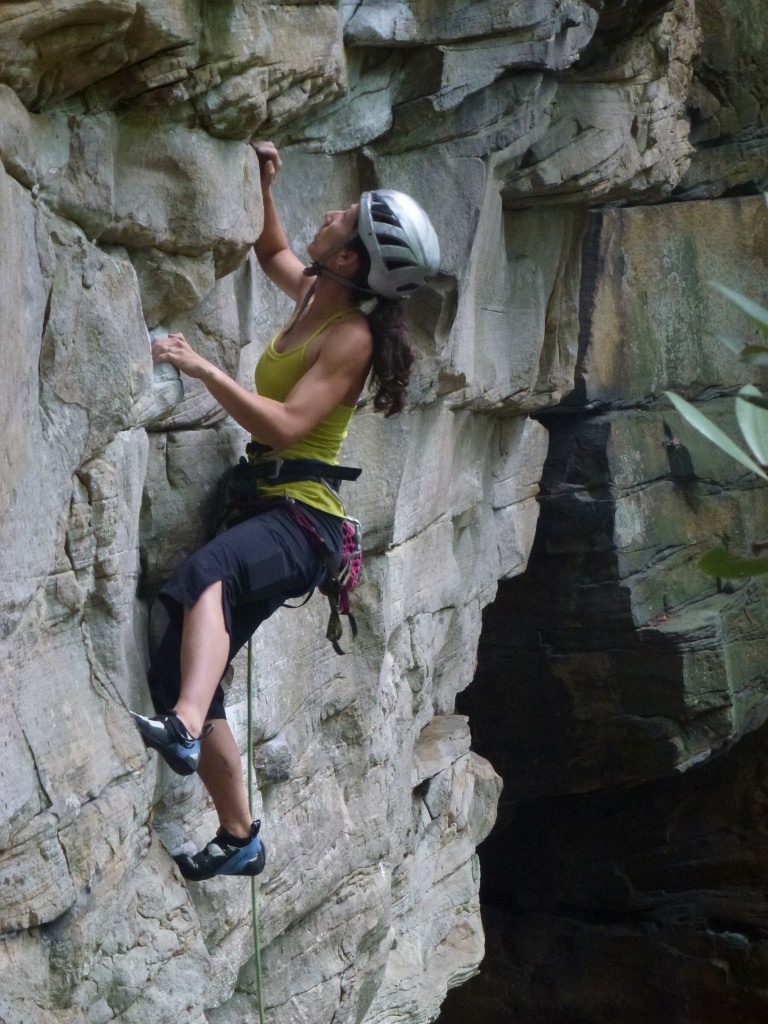 Trying out the new Tenaya Oasi on Lost Souls (5.12a)…with my phone in my pocket (oops)

Week 7: Our first doctor’s appointment, and we were thrilled to see a tiny, flickering heartbeat on the ultrasound screen!  Nausea is getting worse – and intermixed with periods of ravenous hunger.  I continue to wilt and wither in the heat more than usual (I end up drinking so much water that it feels like an ocean in my stomach).  Since I hate running on a treadmill, I’ve replaced my afternoon runs with the elliptical for now.  Hopefully once cooler temps move in in a few weeks I’ll feel better about running again.

Week 8: The song remains the same – my tummy feels like crap most of the time, although I’ve gotten used to it and am managing it a little better.  We haven’t climbed outside due to rainy weather, but I’ve been feeling really strong in the gym, and am enjoying the last few weeks of lead climbing before restricting myself to toproping only for the remainder of my pregnancy.  (For a good sum-up of climbing precautions during pregnancy, check out this article).

Week 9:  Spent a week at Sunset Beach with my husband’s family.  It was nice to get away for a week and be able to talk freely about my “secret.”  It was also great to hang out on the beach with the new-found pudge around my belly button (insert sarcastic smile here).  There’s not really a bump yet, but people weren’t kidding when they said things happen faster the second time around!  My belly is “tracking” about 3 or 4 weeks ahead of where it was with C…We had some cloudy afternoons that were relatively cool so I ran 3 times while I was there.  While my pace had slowed, I was pleased that I was able to keep my distance the same. 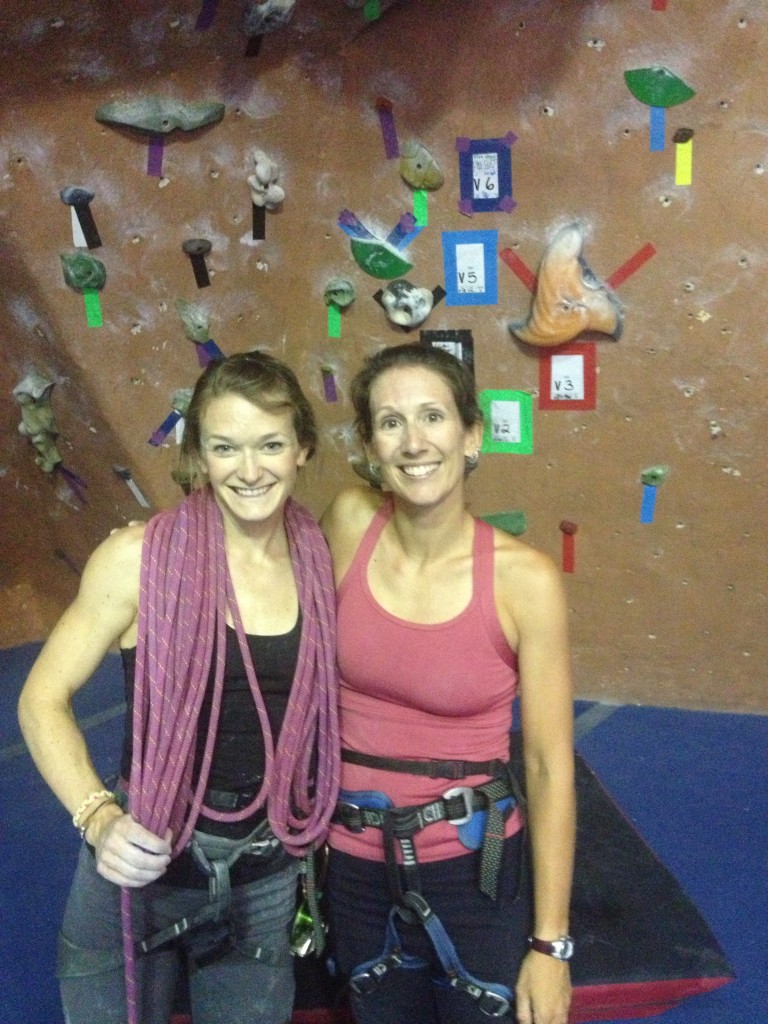 Week 10: After a few days of horrible nausea at the start of the week, my hormones must be starting to level out a bit, because each day has gotten progressively better .  Still too hot to run, but I’ve been biking or ellipticizing (sp?) on non-climbing days.  I was really jonesin’ for a day on real rock, so after our planned weekend at the New River Gorge fell through due to rain, we took our chances with a sketchy forecast and BLAZING hot sun at our local crag, Crowders Mountain.  Good times were had by all, but I made a mental note to never climb at Crowders in August ever again…pregnant or not (it was masochistically hot).

Week 11:  Exciting times – after hearing a pounding 175 bpm on the Doppler at my appointment, we shared our big secret with the world!  I also got my fall allotment from Stonewear Designs, one of my sponsors.  Picking out what styles and sizes I wanted presented a unique challenge due to my ever-expanding belly.  Thankfully everything from Stonewear is super stretchy and comfy (read: forgiving), which makes them the perfect option for my not-quite-ready-for-maternity-clothes-yet body.  (Stay tuned for a review on my fall favorites coming soon!)  I also tried on my Mountain Mama maternity tops…still nowhere close to filling them out.  We’ve also had unseasonably cool weather this week, and I was delighted to get in 4.25 miles at a solid pace – it reminded me how much more fun it is to exercise outside than in. 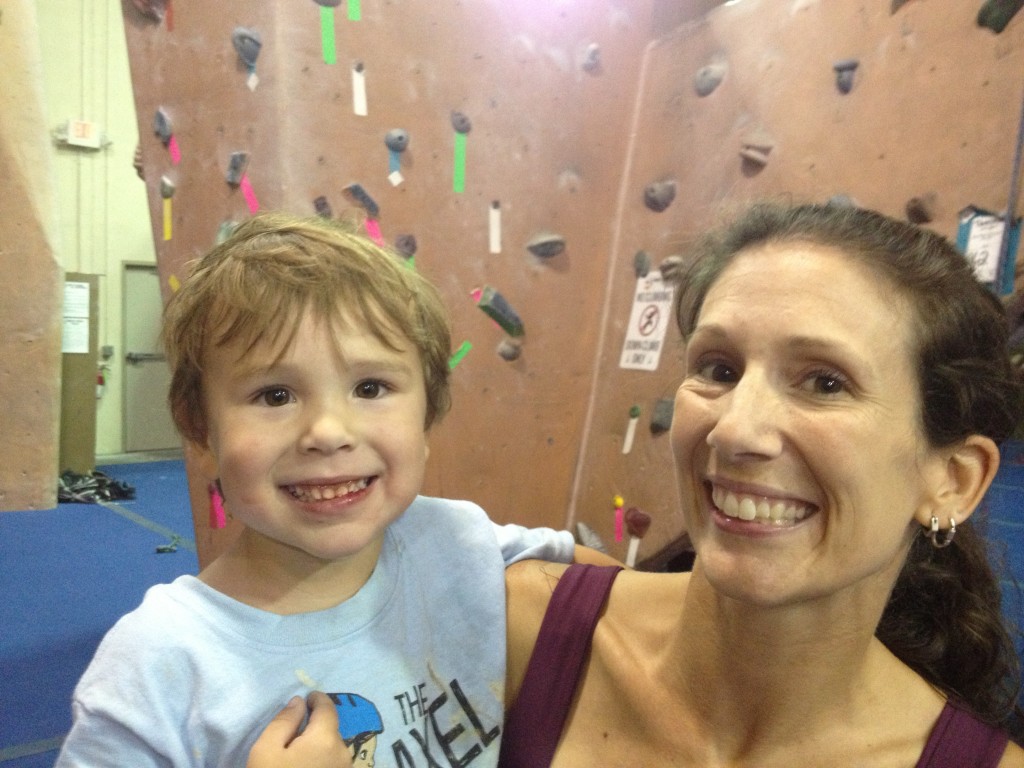 This guy is gonna be a big brother! (Bloody mouth and all…he bit it jumping down from a boulder problem but he’s all smiles still the same!)