To celebrate my fading nausea from the 1st trimester, we decided to take advantage of some unseasonably fair weather at the New River Gorge, West Virginia.  With daytime temps hovering around 80 degrees, and nights dipping into the 50’s, their was a crispness in the air that was much more reminiscent of the beginnings of fall rather than the end of summer!

I found that I had a mixed bag of emotions with this trip.  On the one hand, I’m feeling great – my energy is coming back, and the icky nausea is gone. Although I can clearly tell that my waistline has expanded a good bit, it’s not obvious to the world yet what my body’s got cookin’, and I’ve only gained a negligible amount of actual pounds – so I’m feeling strong and am psyched to climb hard!  On the other hand, climbing is not what occupies the majority of my head space these days.  And I’m winded after just a few minutes of easy hiking with my toddler on my back – a sure sign that I’m slowly but surely falling off the endurance wagon. 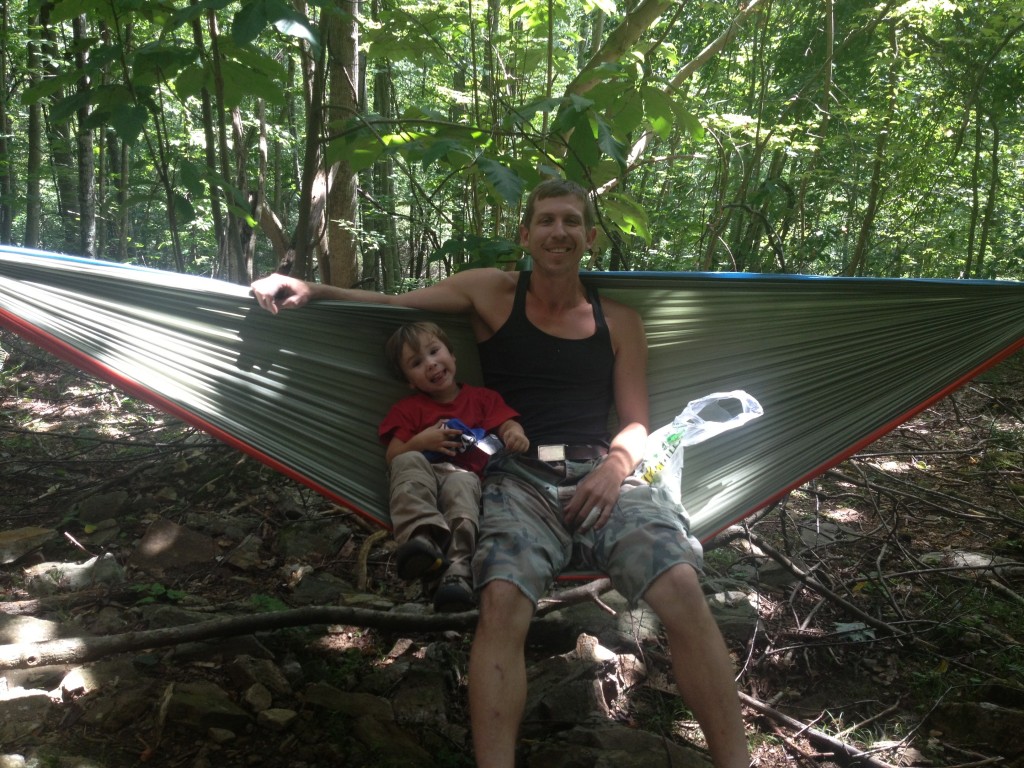 Climbing or not, it was a great day to be outside…

Then there’s the issue of actual climbing logistics – to lead, or not to lead?  A few weeks ago I didn’t hesitate – during the 1st trimester the fetus is so small and well-protected.  It would take a pretty traumatic fall to do any damage – so I felt comfortable going for it with gusto on familiar, well-protected sport routes.  Once the uterus gets big enough to actually move out of the pelvic cavity (aka when people will notice a “bump”), the baby is still safely cushioned in amniotic fluid from an impressive amount of jars and jostles.  However, the gravitational forces from taking (or catching) a long, hard leader fall could obviously cause complications.  And once that belly gets big enough to get in the way, impact starts becoming an issue as well. That being said, most health professionals familiar with climbing recommend that a woman stop lead climbing at some point early in the 2nd trimester. 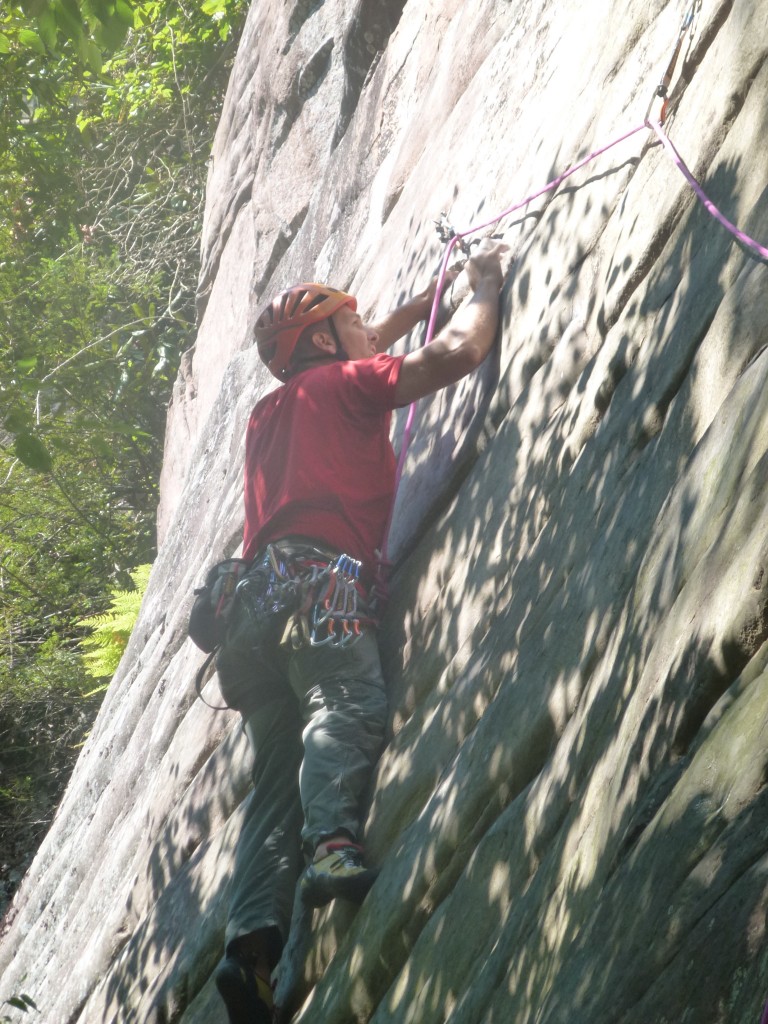 Steve working out the moves on Low Brow (5.12a)

At 12 weeks I’m technically still well within the “safe” range – and in my head I know that a soft catch from a good belayer doesn’t feel that much different than going really high on a playground swing.  But this is obviously not a situation where I want to explore the limits of what is safe and what is not.  So I decided to come into this weekend with no expectations, deciding on a route-by-route basis about my style of ascent.

Here’s the play by play:

Unknown (5.9) :  We warmed up on a newer line that’s not in the most recent guidebook.  Tall, enjoyable, and a fantastic warm-up for the other routes in the area.  I chose to toprope this one because there was a lot of lower angle rock (not as conducive for falling).  As it turns out, the route was really easy and I would have been fine, but better safe than sorry!
Low Brow (5.12a):  Steve has had his sights set on this prize for a while now, and conditions finally lined up right for it!  This route traversed a lot (meaning the potential for swinging, pendulum type falls), not to mention it’s hard, so my odds of falling were high, so I chose to toprope this one also.  I actually got in two laps on it, since Steve took several attempts before sending (but his 4th attempt was the charm!)  Although I had sent this route a little over a year ago right after coming back from my ankle injury, the crux sequence is really intricate and precise.  I didn’t climb it clean on either try this time around (although my second attempt was disappointingly close), but I was pleased with how I felt on it.
Unknown (5.10c):  Some friends of ours were hanging a rope on another unnamed route around the corner, and I had already arranged to take a TR lap on it.  My friend was unable to finish it however, so I decided to tie in on the sharp end without pulling the rope – ie, the first 5 or so bolts were already clipped, and I just took the route to the top.  It felt pretty darn hard for the grade, in my opinion.  Very tricky to read, with a tenuous clip at the crux.  I climbed up, down, left, right, for FOREVER before I finally figured out how to get past a long reach.  The up side however, is that while my aerobic endurance might be dwindling away, my forearm endurance still proved trustworthy. 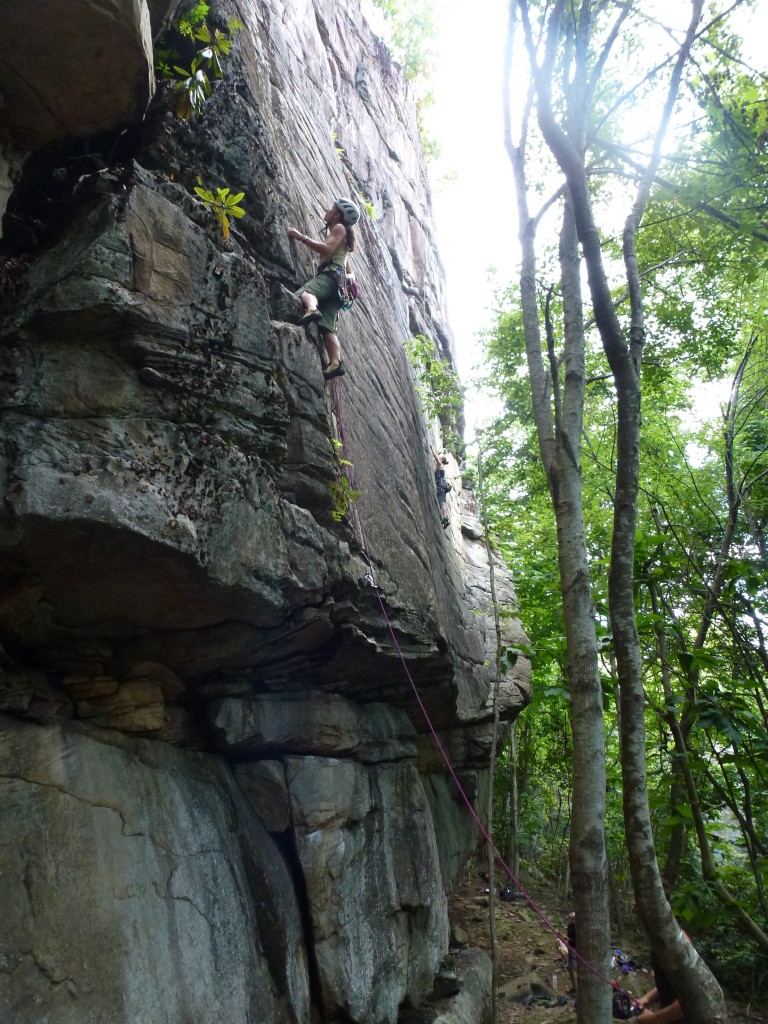 Me and my new Stonewear threads on New Mexican Rodeo

New Mexican Rodeo (5.10+/11-):  Yet another one not in the guidebook (come on Mike Williams, let’s get the new one on the shelves!!!).  According to a party we ran into earlier in the day, it was 5.10c…according to people we ran into later in the day, it’s listed on Mountain Project as 5.11b.  Steve was done for the day, but I wanted to get in another pitch – it didn’t look too difficult and appeared to be bolted well, so I opted to lead it, intending to take if I felt insecure at all about falling.  Turns out this was a great way to end the day!  I think 5.11 is a bit generous, especially when compared to the surrounding routes, but regardless of grade, it was fun – excellent position and exposure!

This might be TMI, but one of my highlights of the weekend was being able to make it through 2 nights of camping with a grand total of one middle-of-the-night bathroom break.  Considering that my usual m.o at home involves anywhere from 2-5 trips to the bathroom per night, I hadn’t been looking forward to the camping part of this trip – but I was pleasantly surprised!

But anyway back to the climbing.  Our next day was spent at Fern Buttress, which tends to be a little more “old school” with bolting than the routes at The Other Place.  Every route we did today had at least one, usually multiple sections of fall zones that I wasn’t comfortable with in my current state of affairs, so I ended up toproping everything I climbed. 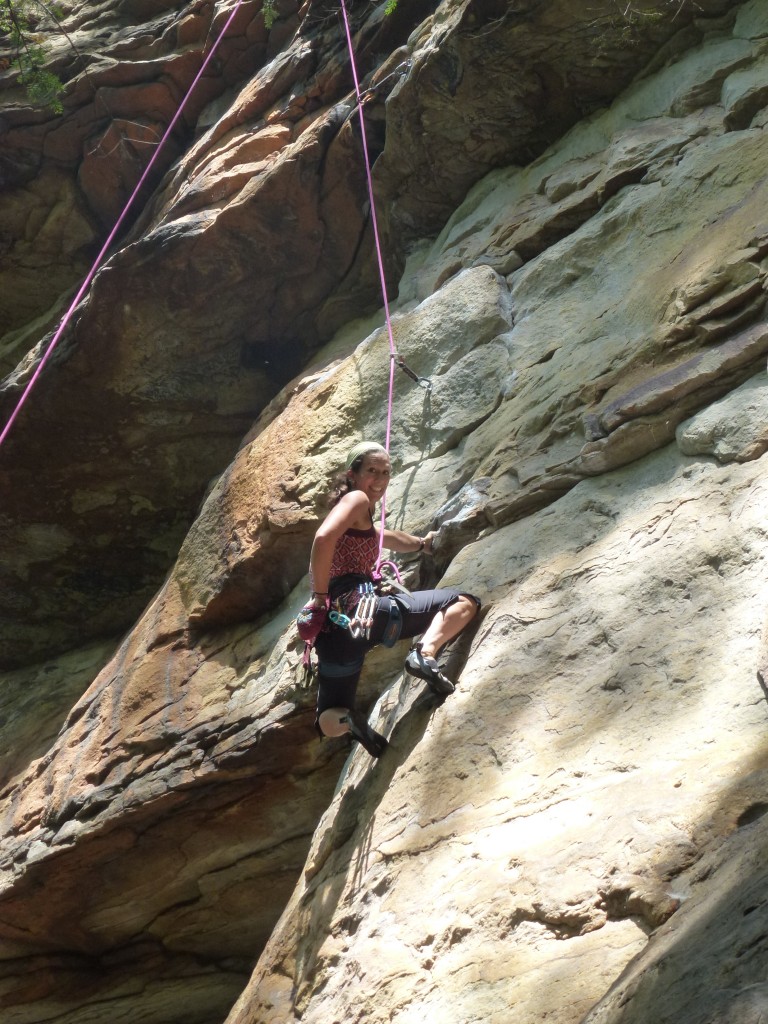 Two-Tone Arete (5.10b):  I’d only been on this route one other time, many years ago, so it felt like a new route for me.  Very sustained moves up an arete to a cruxy bulge at the top – from what Steve said about it and from what I remember from my first time on it, it’s pretty exciting on lead…
Wild Seed (5.11a):  Classic in every sense of the word!  Such a fun route, I think I’ve done it every time I’ve ever climbed at Fern!  No real hard moves, just jug-hauling on surprisingly steep terrain.
Fragile Ego System (5.10a):  I feel the exact opposite about this route.  It might be my least favorite route at the New… first of all 5.10a is a joke, not to mention it’s really runout in a lot of places.  But, the rope was up, so I figured I might as well hop on it.  It had been a while since I’d been on it, so I thought maybe I’d have a change of heart…nope. 😉
Arbor Day (5.12a):  This one shares anchors with Fragile, so we decided to set up a TR on this one.  I’m really glad I got on this one – it looks a little dingy, but climbs way better than it looks.  I thought it felt pretty hard for the grade – none of the moves felt harder than .12a, but there weren’t too many that felt that much easier than .12a either, relentlessly sustained!  Add in the pucker factor from the multiple runouts, and this would be a proud send indeed!  I was psyched that I only had to hang in a couple of places to work out the moves and knock down a few spiders that were too close for comfort.  (A precarious slab where my entire body is hugging the rock is NOT where I want to encounter giant spiders at face level…)

Other than the fact that I toproped almost everything all weekend, I didn’t notice a huge difference in the way that I climbed.  The only routes I fell on were the 5.12’s, which is about par for the course – I generally have to get my beta dialed in really well before I can expect to climb clean at that grade.  It feels so good to have the better (worst) part of my 1st trimester behind me, and the fall-like weather we’ve been having just adds to my delight.  Next weekend we’ll be in Tennessee, so we’ll see how my expanding belly does on the steeps…