Nothing earns you more street cred in the climbing world than an onsight near your limit.  Because let’s face it, figuring things out on the fly is hard!  Odds are good that on your first time through, you’re gonna botch a few sequences, or at the very least, do them less efficiently than you would if you were more familiar with the route.  Once you’ve touched all the holds you start to piece the route together in chunks, and can usually make a better plan of attack (figure out clipping stances, find rests and shake-out spots, etc).  Not to mention there’s all that pressure – you only have ONE chance to onsight – one false move and you blow it! 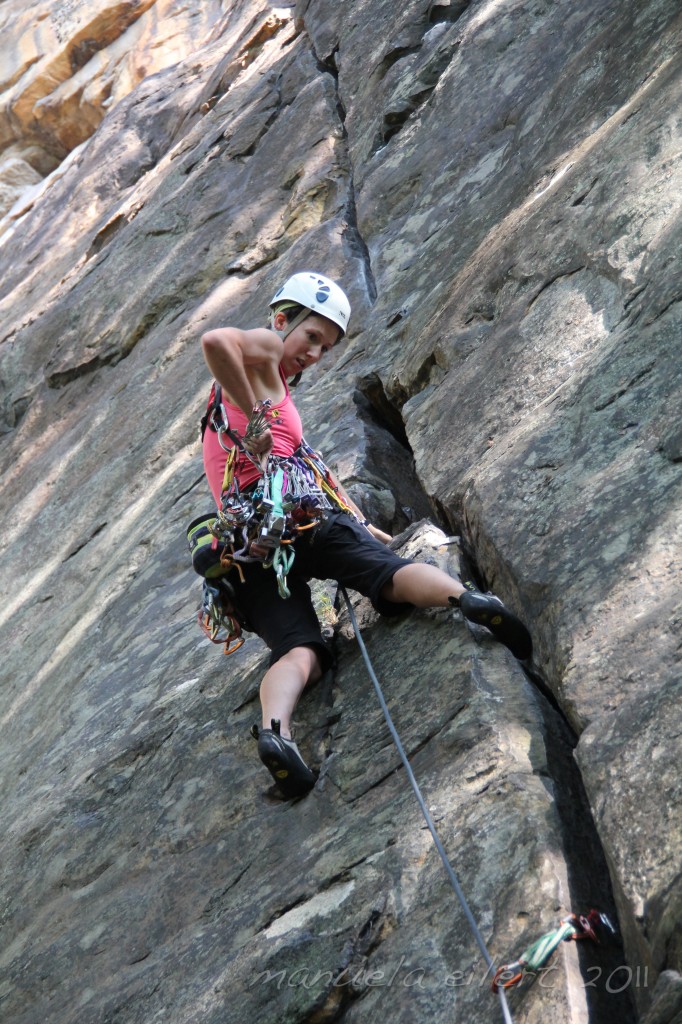 But I guess before I get ahead of myself, let me clarify a few terms for the non-climbers out there.  BETA is any information about a particular route, such as a description of key holds used or tips on which pieces of gear fit best.  For many climbers that are just starting to work a route, this sort of information is helpful (and therefore welcomed.)  If a climber SENDS a route (meaning got to the top w/no hangs or falls) on his/her first attempt after receiving beta, the ascent is considered a FLASH.  (Routes sent on subsequent attempts are called REDPOINTS.)  But the most prized style of ascent is an ONSIGHT – meaning the climber sent the route on the first try without any prior knowledge (beta) about the route.  If you belayed your partner on it, you saw how the moves should (or should not!) be done – that’s considered gleaning BETA and therefore the best you can then achieve is a FLASH when it’s your turn to climb.  If you watch Youtube videos of other climbers doing the route, or yell out mid-climb questions about whether that next hold is good enough to throw to, then you’ve lost your chance to ONSIGHT.  Onsighting only happens when you figure out ALL of the moves by yourself…on the first try.  (So for someone wishing to onsight, giving out unrequested route information is considered rude.)

That being said, there’s still room for plenty of gray areas when it comes to styles of ascent.  Not that I claim to have the final say in any of these matters, but the following is a highly opinionated wade (not a rant) through some of these murky ethical waters, based on my personal opinion as well as what I’ve observed throughout the climbing culture…your mileage may vary.

1.  THE SIDEWAYS GLANCE – This happens when more than one climber in a party wants a chance to onsight.  It usually involves 3 people – 2 who care, and one that doesn’t give a crap.  The latter ends up belaying one of the aspiring onsighters, while the other contender valiantly turns around, looking away for the duration of the first climber’s turn.  On paper, it works, but the slope gets a little slippery when Climber #1 starts in with the “try hard” sounds – it’s hard for Climber #2 not to sneak a quick peek when he can tell there’s must-see TV going on behind him.
THE  VERDICT?  Climber #2 knows whether that involuntary 180° turn was an honest whoopsy-daisy or a long, lingering, blatant stare.  Call it whatever lets you sleep at night…
MY TWO CENTS –  Unless you feel really strongly about a particular route, take turns with who gets the onsight chance and cheer your partner on with gusto.  When it’s your turn to take the sharp end first, let them do the same for you.  It’s a lot more fun than trying to decipher sending screams while watching ants carry away your Clif bar crumbs. 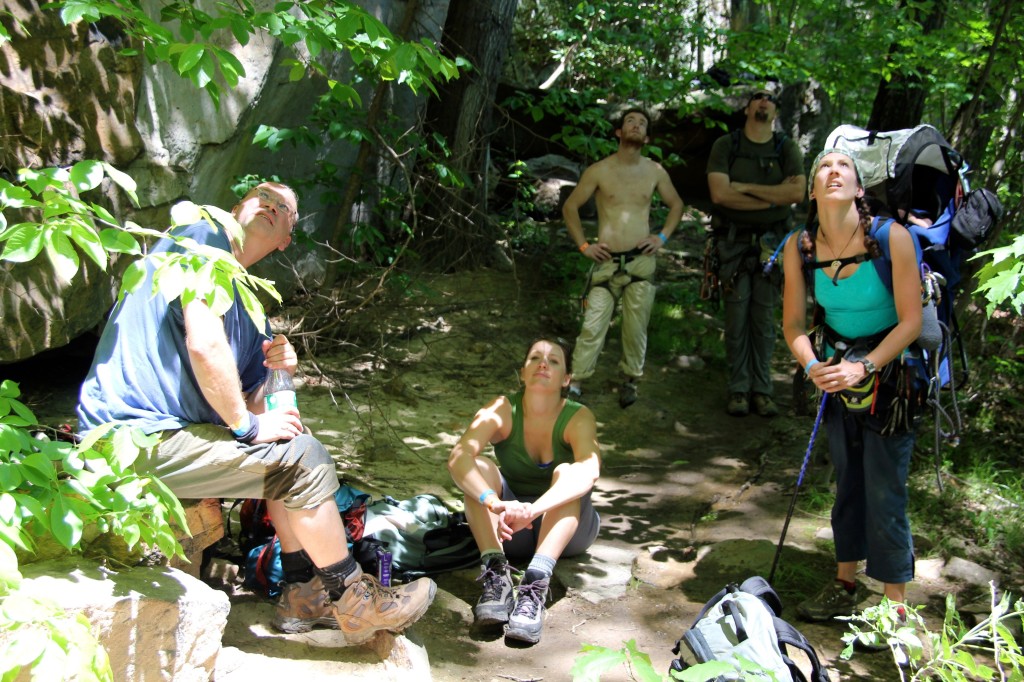 2.  THE UNSOLICITED BETA SPRAY – This scenario happens often at crowded areas.  The perpetrator is generally  a well-meaning individual who wants to see you succeed.  If your goal is an onsight, beware of innocent sounding spray that starts out like, “Oh, X ROUTE, huh?  You know about the ____________ (insert highly technical term here) after the crux, right?”  If not contained right away, this sort of beta spray can instantly go viral.  Before you know it you’ve got an entire play by play of the whole route, and some macho douche bag has taken away your onsight potential!  (Ask me how I know.  Or, rather, don’t ask, I don’t wanna talk about it…)
THE VERDICT?  If the climber hoses the spraydown as soon as it starts, carry on with the onsight attempt.  Or if it doesn’t seem to register – I know a lot of times I can’t hear anything but my own breath when I’m up high and focused.  But if the climber acknowledges the beta in a positive way or continues to engage the beta-giver, all onsight bets are off.
MY TWO CENTS – Mind your own business, especially with people that are not in your climbing party.  While you may be chomping at the bit to share your newfound knowledge of that hidden hold you just discovered, don’t rob someone else of the experience of finding it themselves.  Don’t forget that there’s often more than one way to do a sequence.  If, however, a climber appears to be struggling and looks like they’re at a dead end, it’s okay to politely ask if they would like some beta…just don’t be offended if they decline your offer. 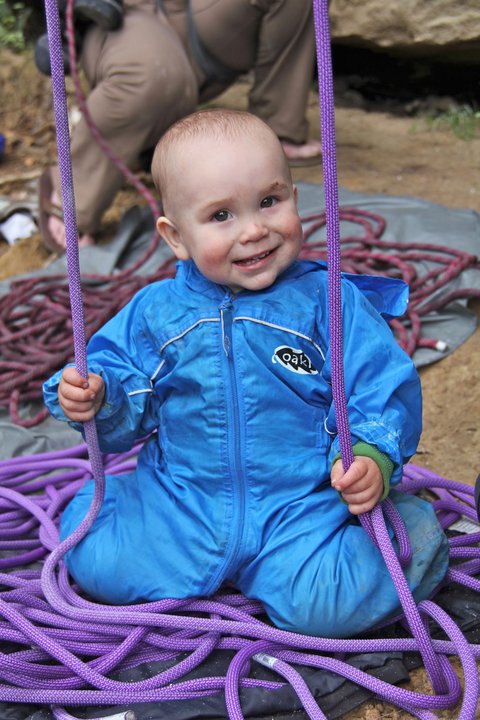 3.  THE IN THE NAME OF SAFETY SPRAY – Many times pertinent safety information is included in a guidebook description, but that’s not always the case.  This sort of spray can be something general, like “Be careful making the 3rd clip,” or “Make sure you’re feeling strong before committing to the runout.”  Or, it can be very specific, especially on a trad line  – “Be sure to save some  bigger gear for the top.”
THE VERDICT?    Safety information about a potentially dangerous section of rock does not affect an onsight endeavor.  To me that’s just common courtesy that goes above and beyond any sort of ethics debate.
MY TWO CENTS – Since my preference is always to NOT get hurt,  safety spray is always welcome by me.  If you see something, say something, right?  However, if you’re on the fence for whatever reason about whether to inform another climbing party about a certain issue, tell the climber’s belayer.  The belayer should understand his climber’s preferences well enough to make an educated decision about whether or not to divulge your information.  (And for goodness sake, it should go without saying that if a climber OR belayer appear to be incompetent in any way, don’t be afraid to respectfully be THAT person – you don’t want an accident you might have prevented to be on your head.)

4.  THE INADVERTENT CONFIRMATION CHEERS – Sometimes well-intentioned cheers can provide a good bit of beta just from reading between the lines.  For instance, if a climber just pulled what she felt like was a hard move, and then heard her belayer yell, “Awesome, finish it up!”, it’s probably safe for her to assume that the hard sequence she’d just completed was in fact the crux, and can expect easier climbing the rest of the way.  Another good example of this scenario happened to me a few months ago, when my friend Adam was trying to onsight a quintessential line at the New River Gorge.  The belayer and I had both been on the route before, and as Adam approached the crux, I’d said (quietly, so only the belayer could hear me), “I hope he sees the 2-finger undercling…”  No sooner than I’d said it,  Adam reached up and found the easy-to-miss hold.  I shouted, “Yeah!”, at what probably seemed like a really random time, at which point Adam looked down and said, smiling, “That’s good confirmation beta!”
THE VERDICT?  My friend Adam ended up falling a few moves later, but had he have sent, no one would have argued his onsight.  As long as the cheering is fairly vague (ie, “Go big!”, “That’s it!”, or “Keep moving!” as opposed to, “That hold sucks, next one’s better!”) a cheerful spectator cannot ruin an onsight.
MY TWO CENTS – Camaraderie is a big component of the sport.  Don’t get so bogged down with “the rules” that you forget to cheer on your friends.  Sometimes all you need to find that extra sending edge is just knowing there are people on the ground that believe in you. 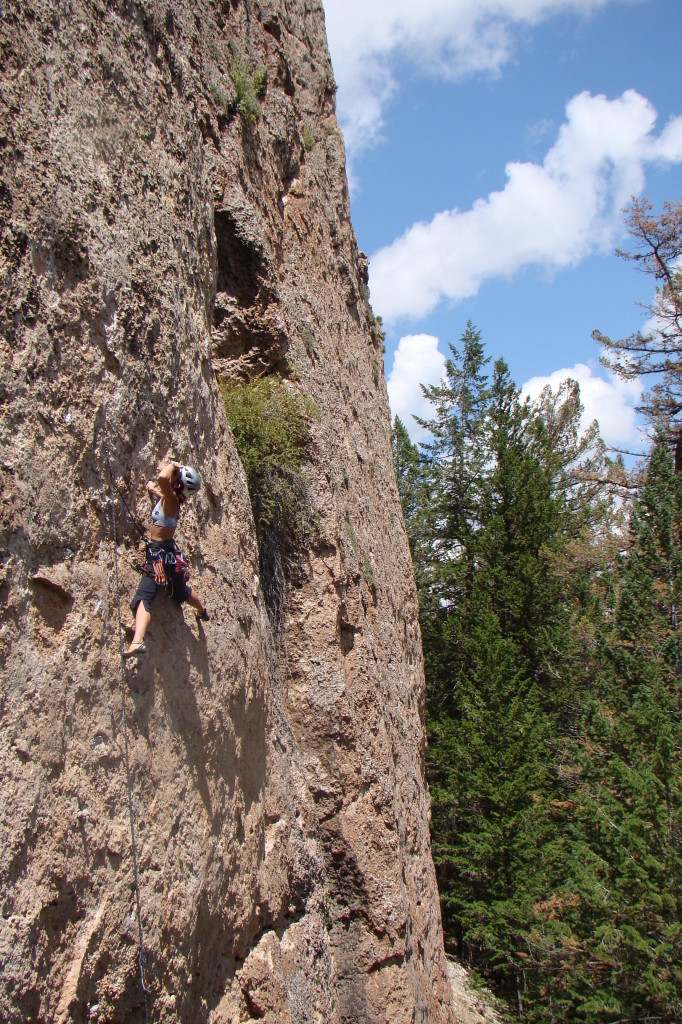 Scoping out holds on Toasted Cracker (5.11d) in Ten Sleep, WY last summer. (Ended up botching the onsight at the anchors, but sent fairly easily next go…)

5.  THE ROADMAP EFFECT– Sometimes it’s not what people say that can ruin your onsight, but rather what they leave behind.  This one is an especially murky issue to wade through, especially in popular sport climbing areas like the Red River Gorge that see a lot of climbers on rock that is so steep it never sees enough rain to wash the chalk off the holds.  Whether it’s intentionally drawn tick marks to indicate a tiny foothold or the sweet spot on a hand hold, or just a consistent dusting of white that leads from bottom to top, an overly chalked up route can make reading a route significantly easier, especially if there are hard-to-see holds or tiny edges involved.
THE VERDICT?  It depends on the route.  A smattering of white may very well guide you in the right direction on a route, but on a straightforward bolted line, the intended path is often obvious anyway, chalked or not.  But, if everyone else you know struggled to find a hidden hold on a particular route, don’t automatically assume that you would have seen it right away had the climber before you not left a giant tick mark on it.
MY TWO CENTS – Don’t forget that someone else’s tick marks can sometimes hinder more than they help, and certainly don’t assume that you have to use a certain hold just because it was ticked.  Climbers come in all different sizes, with individual strengths and weaknesses – that ticked foothold that you tried but made you feel off-balance might actually have been an intermediate hand hold a shortie used to get through a reachy section.  And that side pull ticked way out right may have been an unsuccessful climber’s attempt at bypassing the crux (we call that decoy beta 😉 )  That being said, if I’m gearing up for a launch over the lip of the roof, and I see a tick mark…that’s where I’m gonna aim for, and anyone that tells you different is lying!

With so many opportunities and legalities to wade through, it’s no wonder folks covet those 3 extra letter grade points on their 8a card.  At the end of the day, only you can truthfully answer the question of, “Did you onsight?!?”  As mentioned above, your answer should be whatever lets you sleep at night.  If in doubt, use an “asterisk.”  For example: “I sent first go!!!….BUT, ___________ (insert the whole story here).”  Just as I wouldn’t want anyone to question any of my onsight claims, I’m not trying to call anything specific into question so please don’t take this post too seriously.  With that said, however, I’d love to hear some opinions on what you count as a true onsight, and what feels more like a flash…just keep it cordial.  Despite the “rules,” let us not forget that at the end of the day, we’re just talking about rocks.

11 Responses to “The Murky Ethical Waters of Onsight Climbing…”