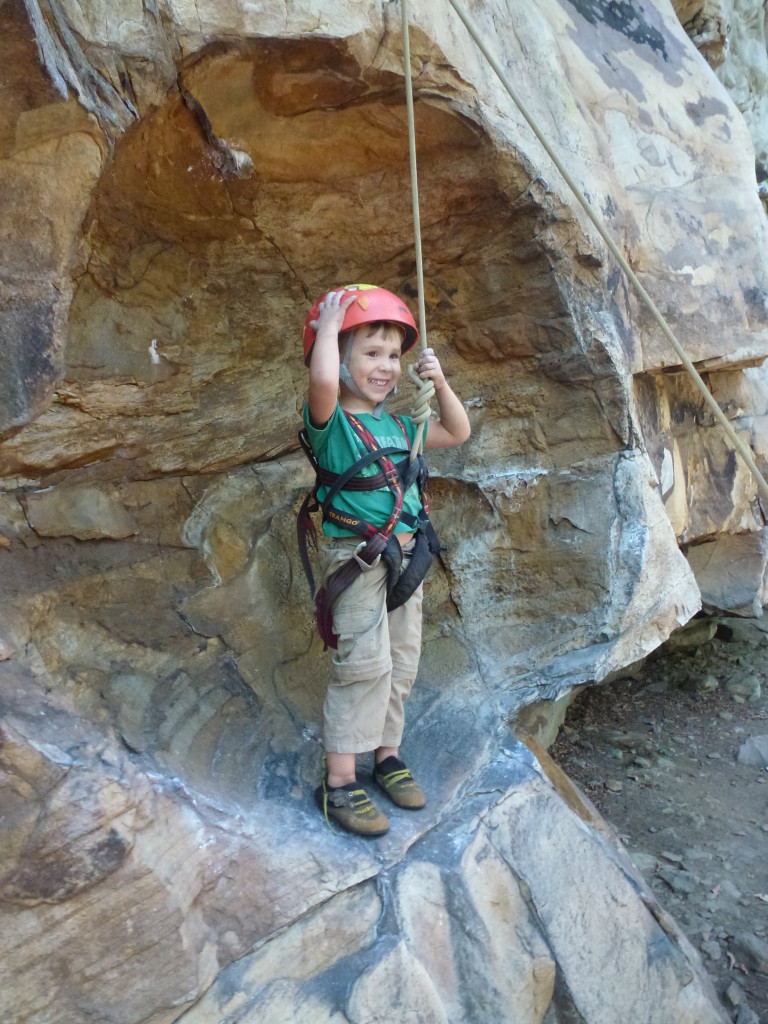 Happy kiddo hanging out in the giant hueco of The Wanderer (5.10a)

After rain, rain, and more rain botched our plans to head up to the New last weekend, a high of 70 without a cloud in the sky was a welcomed sight this weekend!  We had a rather large crew, with a wide range of ability levels and agendas, so the real crux of the weekend was figuring out where to go!  We ended up deciding on the Upper Meadow for Day 1, and Endless Wall for Day 2, which seemed to work out well – all parties involved sent a little, flailed a little, and of course laughed a lot!

Here’s the rundown of the routes I got on:

Upper Meadow:
Ben Dunne (5.10a) – Fun, stemmy little trad number that made for a great warm-up.
Floaters (5.10d) – Interesting arete climbing with a few reaches that were surprisingly long for the grade.  I had to make a couple desperate throws that thankfully went my way.
Cross Eyed and Blind (5.11a) – Wow, can you say pump?  I’d never been on it before, and I was hoping to climb it clean (on toprope) for the “preggo onsight…”  But instead I got ANNIHILATED.  I did all the moves, but relentless lock-offs combined with the steep angle left me far too winded to even think about linking the whole thing together.  I’m looking forward to a rematch down the road when the crag-sprout in utero can watch from the base with his/her big brother.
Unknown (5.10a) – A little weird, but a few fun moves sprinkled in here and there made for a worthwhile lap up this line.
Mr. Cute (5.11a) – By far my favorite of the day.  After an embarrassing performance on Cross Eyed and Blind, “preggo-pointing” this one fairly easily was definitely a confidence boost.  Ironically, the upper half was far steeper than Cross Eyed, but the holds were a lot more incut and not nearly as far apart, meaning better shake out stances, and less effort for each individual move. 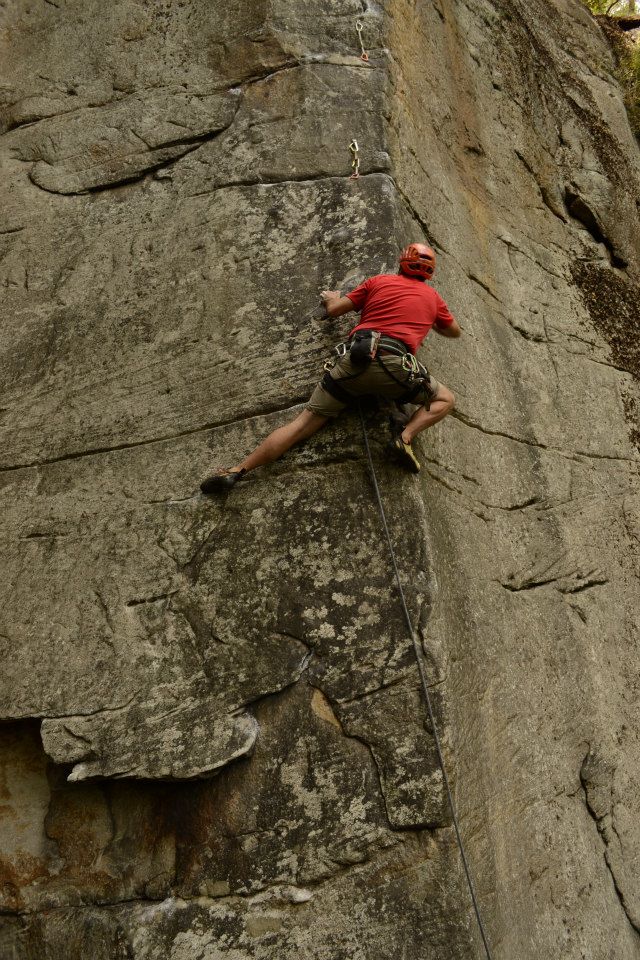 Endless Wall:
Double Flat (5.9) – This was a new one for me, as we usually walk right by it because it’s generally wet, but it was dry as a bone this weekend!
Legacy (5.11a) – An epic journey as always, even on toprope!  One of the best of it’s grade at the New, hopping on this one is always a pleasure.  Psyched to watch Steve nab a second go send!
Discombobulated (5.11b) – Since I was on TR, I decided to try some slightly different crux beta… Boo, the new sequence didn’t work and I fell, which was slightly disappointing because had I stuck with what I knew worked, I would have “preggo-pointed” every route clean on Day 2.
Muckraker (5.11a) – Another great Endless 5.11.  Not very powerful, but a great opportunity to test your technique and footwork.
Bonemaster Gear Fling (5.11c) – My last climb of the trip was my highlight of the weekend!  I’d been on this sucker only once, and it was over 2 years ago.  Initially I just remembered it being really hard at the top, but after climbing it again, I realized that I never even finished it the first time because I’d gotten shut down at the crux.  This time however it was a different story, as I was pleasantly surprised to climb it clean and nab the “preggo-point!”  After one hard move down low, the middle section was pretty mellow, but it led to a crazy technical crux, and a series of powerful stand-up moves off ridiculously high feet.  I’ll have to tackle it again on the sharp end at some point, as my TR ascent obviously didn’t take into account the headiness factor of the generously spaced bolts, but it was still awesome to preggo-send something I couldn’t even thrash my way up 2 years prior! 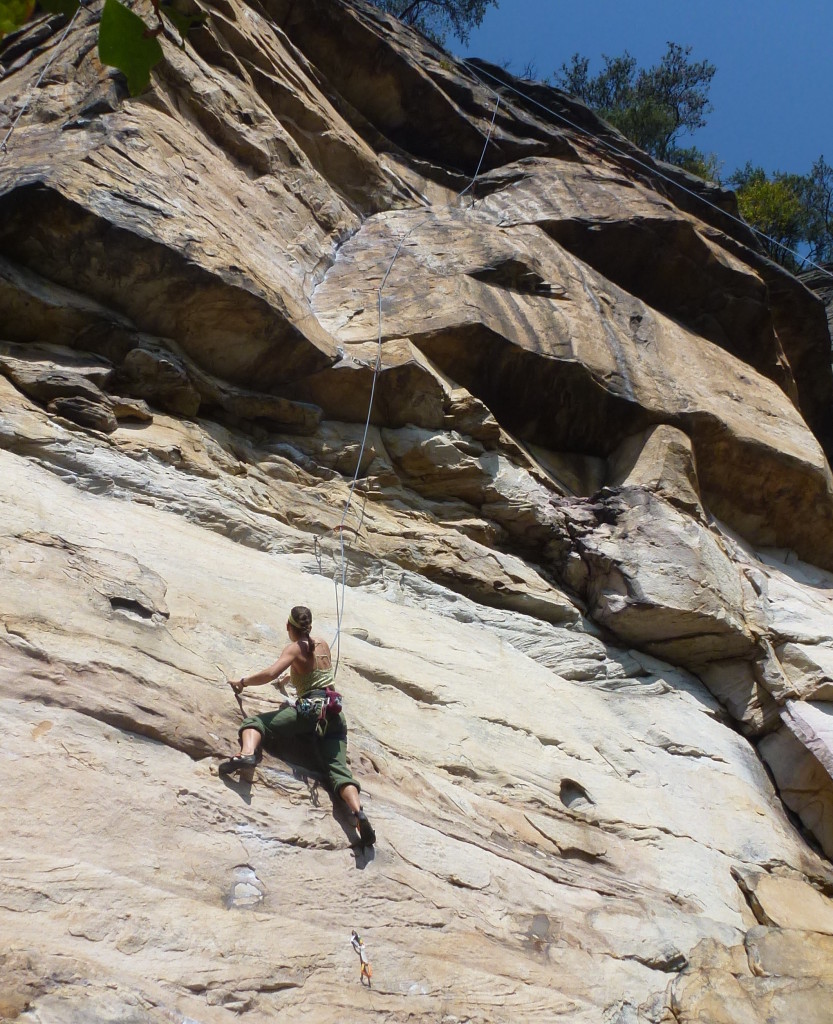 In all the times I’ve been to the gorge, I had yet to venture down to the Upper Meadow, so it was great to explore a new (to me) area.  And of course, Endless Wall is my favorite place to climb at the New.  Although conditions will still be a wee hot to be considered prime for another few weeks, the lack of humidity made it obvious that fall was in the air!  My belly is expanding more and more by the day, so I probably only have another couple of weeks or so before moving into my Mountain Mama full-body pregnancy harness – so it was nice to be able to enjoy climbing at close to my pre-pregnancy levels one more time before the inevitable pointing, staring, and whispering begins…