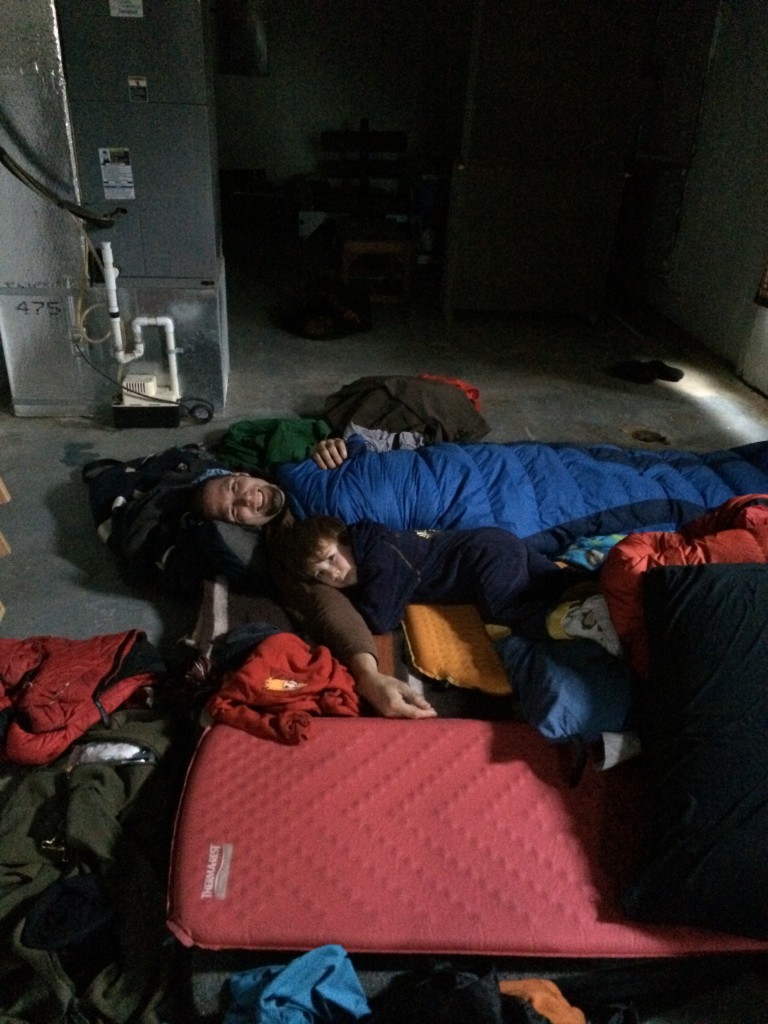 For the past few weeks we’ve had our eye on our schedules and the weather, with fingers crossed that the stars would align and we’d get one last chance to hit up the New River Gorge once more before cold weather, holidays, and new baby prep begin to overwhelm.  Towards the end of last week we finally saw a weather window that looked promising, so we made tentative plans, solidifying them on Friday just a few hours before we left (not recommended, as the mad dash to pack was a bit hectic…)

Despite the fair skies advertised for Saturday, it was cold, wet and miserable when we rolled into town around 9:30 or so.  Drat, the weather gods must have figured out one of the chinks in my pregnancy armor –  setting up camp in a downpour.  I’m partially ashamed to say that it was a no-brainer to shift directly to Plan B – crashing on some bouldering pads in our local climbing partner’s basement.  C was a little confused as to why were sleeping inside, but I was certainly delighted to be able to stay warm and dry not only when I went to bed, but also throughout my inevitable nighttime potty breaks.

Anyway, despite the somewhat odd start to our trip, we ended up with a great weekend – here’s our sum-up.

Day 1:  Endless Wall
Exoduster (5.10b) – I am not a fan of this route, but it does present a reasonable warm-up for the area (although everyone who’s done it pretty much universally agrees that .10b is quite the sandbag rating…).
Smore Energy (5.11c) – I’d flashed this one a couple of years ago, and hadn’t been on it since.  This time around my endurance was obviously a bit lacking (although for good reasons!) The pump at the roof and bulge took a lot out of me and I had to rest a couple of times.
Freaky Stylee (5.12a) – This route will always have sentimental value for me, not just because it was one of my 12 5.12’s for 2012, but because I sent it by the skin of my teeth right after my hubby had just sent his neighboring project du jour in equally desperate fashion.  It’s also an Endless Wall classic, so I never pass up a chance to get on it again, even if it’s just a pregnancy toprope burn.  I actually felt surprisingly strong on it – I got pumped trying to remember a sequence after the traverse, and forgot about a key hold I use in the crux, so I wasn’t clean by any means, but I was delighted at how solid I felt making the moves.

Crag-Daddy warming up at Whippoorwill

I think it’s safe to say that everyone’s highlight of the weekend was the crag-kiddo’s “send” of the Fern Point ladders at the end of the day.  The shortest of the 3 ladder options at Endless Wall, this option features 3 ladders (each about 15-ish feet tall), with a scurry through a narrow corridor sprinkled in between.  Our last few visits, C has been inquiring about why he can’t do the ladders by himself, and considering how well he’s taken to roping up recently, we decided to let him have a crack at it.  Steve set a belay at the top of each ladder, using some quickdraws as directionals at various points, and a safely harnessed (and helmeted) C zoomed right up all three in no time!  He did a great job “cleaning” the quickdraws on the way up, and was in fact rather disappointed at the top that he couldn’t go back down and try it again!  His protests were somewhat appeased when we told him that next time he could try the (much taller) Honeymooner’s Ladders since he did such a good job on the little ones.

Day 2:  Whippoorwill
It’s hard to believe it had been more than 2 years since we’d last been to this area (though with all the amazing rock out there, it’s not that hard to imagine I guess!)  Today was a more laidback day as far as grades go, which was evident in the fact that I was clean on all the routes I attemped except for one (as opposed to hanging my way up everything the day before!)  The other times we’ve climbed at Whippoorwill the water has been too high to access the largest section of cliff, so we took advantage of low water season and hiked over to terrain we’d never seen before.

Unknown (5.9) – Funky start, but then enjoyable climbing to a bulging finish.
Latch Key Kids (5.10a) – This might have been my favorite route of the weekend!  A long, technical romp that followed a thin crack/seam feature, just steep enough to accumulate a pump for the sloping finish.  Very fun movement, with a cool crux sequence down low pulling a bulge.
Flounder (5.11a) – Our crew all agreed this was a great route –  but we also all agreed that it felt pretty hard for the grade.  Sustained climbing over relentlessly tiny holds made for quite the technical face climbing clinic – I was pretty proud of myself for hanging on for the preggo-flash (as well as proud of the hubby for his first 5.11 onsight!)
By this point the inevitable afternoon rain was looking closer and closer, and I wasn’t comfortable with the idea of scrambling over the rocks and scree slope at the base of the cliff in a downpour, so we decided to go ahead and make our way back to towards the car, finishing on the short routes at the base of the approach gully.
Pat-agonia (5.11b) – Only route of the day I couldn’t do clean.  Maybe I’d just gotten overworked on the previous route, but figuring out all the long reaches seemed hard in a “not fun” kind of way, so I bailed about halfway up.  One of the perks of being pregnant is there’s never any pressure to finish a route if I’m zonked 😉
Jowiki (5.10a) – A much better ending than it’s next door neighbor, although all the efforts from the weekend must have been catching up with me because it still felt a lot harder than it probably should have.  We had planned to end with the easiest route on the wall, Whinerlamer (5.8), but the rain started in on us just as we were finishing up Jowiki, and thankfully gave us just enough time to pack up and get back to the car without getting soaked. 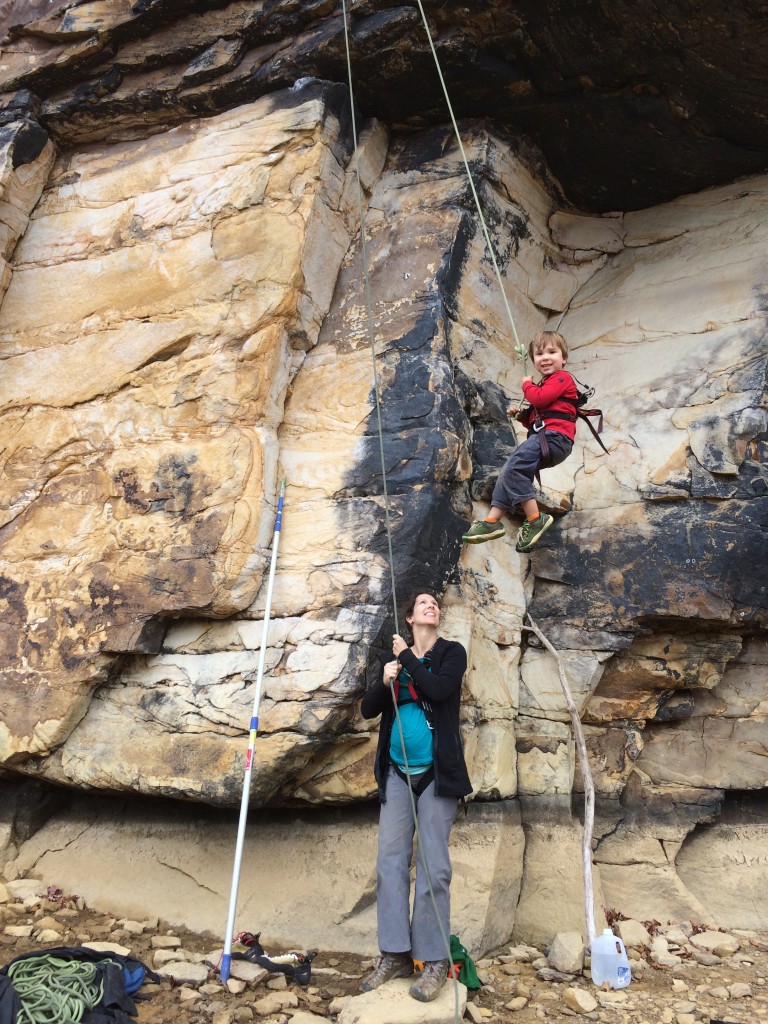 You know, just hanging around at the crag…

This weekend was a really fun balance between old and new – on the first day we hit up some classics at one of our favorite places ever to climb, and on the second day we had a steady diet of new (to us) routes we’d never even seen before.  It’s kind of a metaphor of the life stage our family is in right now – comfortably enjoying life to the fullest as a family of 3, while preparing for a new arrival in a few short months that will change the entire dynamic!  Odds are good that the next time we plan a New River Gorge weekend it will be next spring as a family of FOUR,,,hard to believe but it will be here before we know it!

What adventures did everyone else get into last weekend?