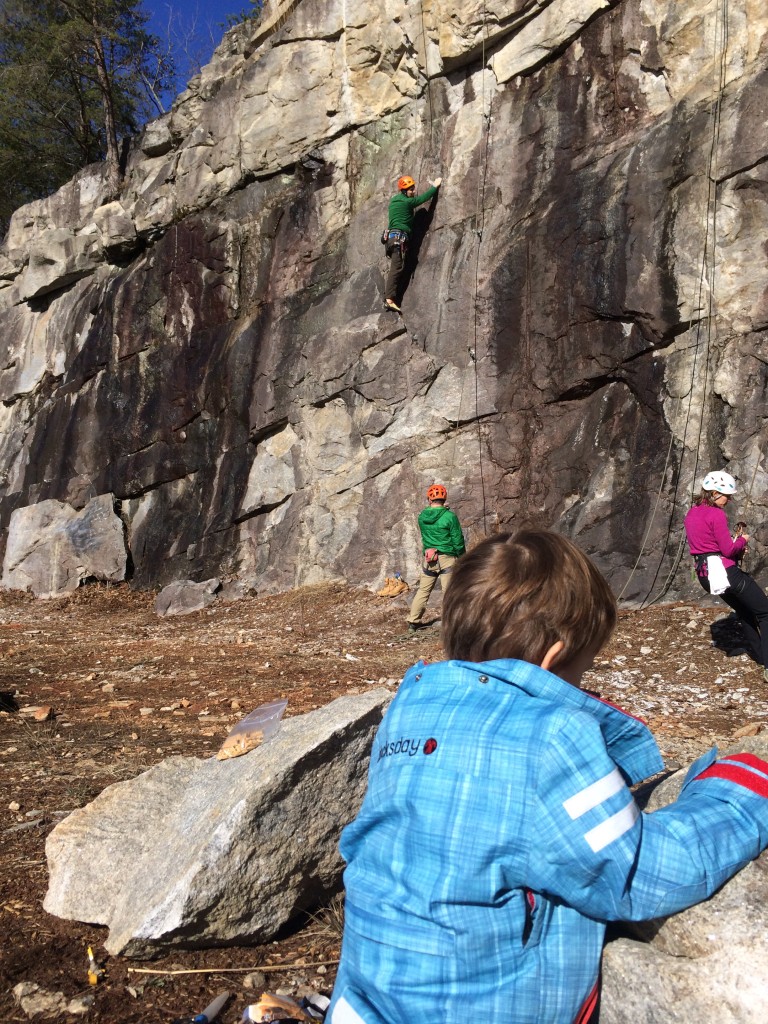 It’s not every day that our family gets to try explore a new climbing area within a day’s drive.  Our original plan for a midweek holiday climbing escape involved local rock at Crowders Mountain.  But when my friend Tonya, (who happens to be 32 weeks pregnant herself), suggested a day trip to a “new” area that’s been getting a fair amount of buzz recently, our ears perked up.  When we saw that it was just under an hour and a half away and that the approach time was literally ZERO, it was music to our preggo ears!  Much more enticing than the steep, stairmaster approach toting a 30 pound toddler the majority of the way!

I put the word “new” in quotes because the first ascents at Rocky Face went up in the mid-1980’s, which hardly fits the definition of new.  However, this blasted granite quarry in Hiddenite, NC was turned into a county park just a couple of years ago.  As a recreational area, it’s got it all – picnic tables, lots of hiking trails with geocaching points, with great views of rural NC from the top of the mountain.  As a climbing area, it is a work in progress – with loads of volunteer hours put in by locals Johnny O’Connell, Travis Mabe, Ryan Beasley, and Steven Pope, Rocky Face is becoming a wonderful winter playground for climbers of varying abilities.  (Here’s a link to a local TV segment done on the park recently.) 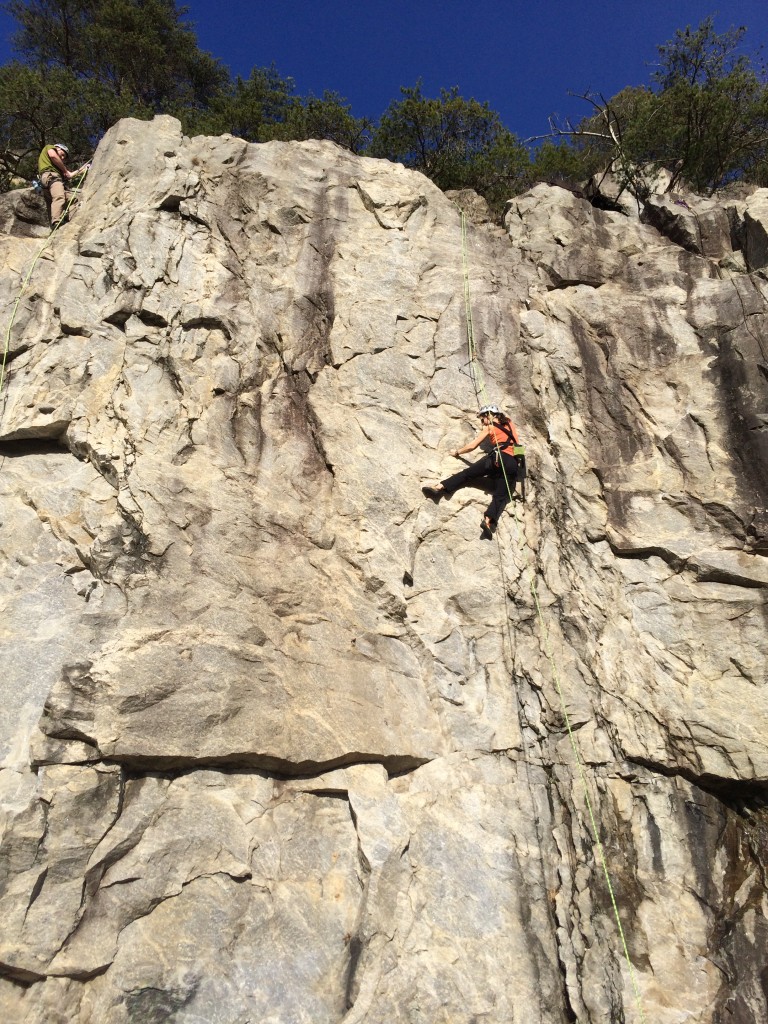 The Rock: It’s granite, with a lot of mica in it – the granite is pretty sticky, but the bits of mica can be a bit slick.  It’s a quarry, so if you are expecting bullet hard rock quality, you’ll be disappointed.  Everyone in our group broke off at least one hold during the course of the day.  (With that in mind, helmets for climbers, belayers, as well as small children roaming the base is highly recommended.)  That being said, there was a marked difference in the amount of loose rock between older routes that had seen a fair amount of traffic, and newer lines that were just recently cleaned.  I’d imagine that another year or two of traffic would go far in remedying this issue.

The Climbing:  The style of climbing was not what our crew was used to – the movement was interesting but a little cryptic and hard to read.  I found that often I would stand up expecting to hit a flat, juggy ledge only to be greeted with a low-angled bulge.  The angle hovers around vertical, and while the face is littered with incut crimps, we found that many times it seemed as though all the holds were facing the “wrong way,” until we figured out how to use them. 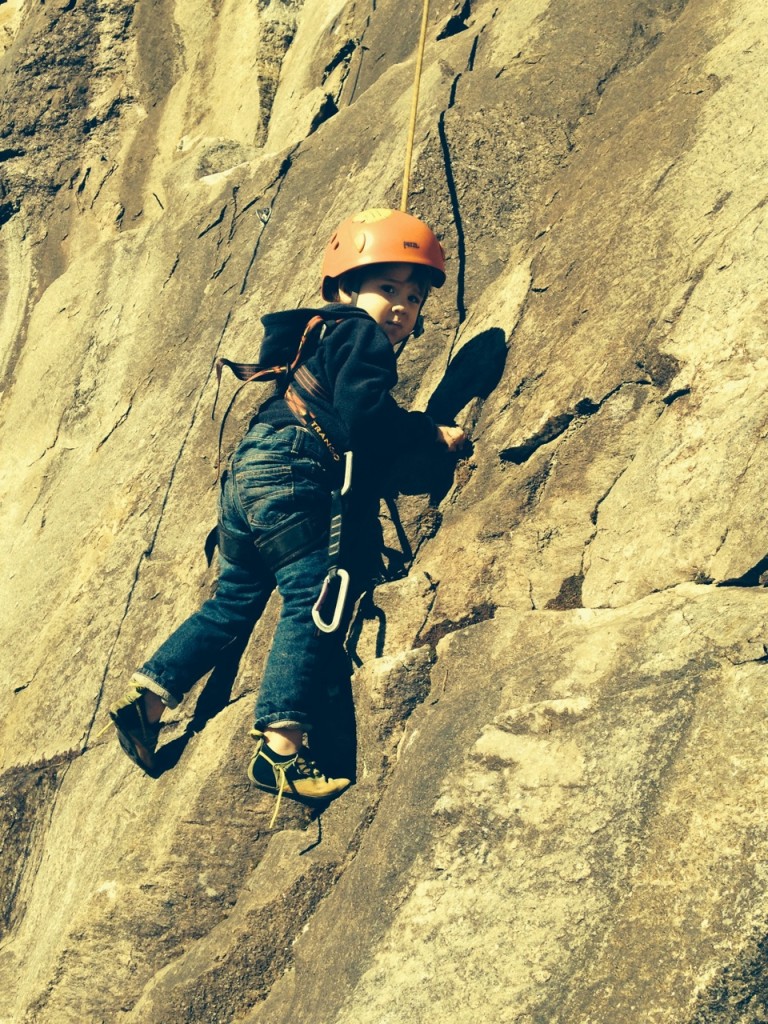 Even crag-kiddo got to get in some climb time!

The Routes: The routes on the left side of the wall were really short (maybe only 25 feet?) and looked super easy (5.6 and below.)  They were all easily toprope accessible via a rocky staircase, and many could be led on bolts as well.  This area would make an awesome spot for beginners, new leaders, and children learning to climb.  As you work right, the routes get gradually taller, to around 50 feet or so. We spent the first part of our day on Sunny Day (5.8), Old Man’s Brow (5.10), and Twins Right (5.9).  The middle one is apparently still in the process of being cleaned, as there was a ton of choss still breaking off, but the ones on either side were definitely worth doing.  Then we went further right and did what we all felt like were the highest quality routes of the day.  We weren’t sure of the names/grades initially, but have since gotten beta for all but one: Unknown (5.7), Aidman (5.11a), Double Roof Ballet (5.11b), Hardman (5.11b).  I’ve included a picture of these lines at the bottom of this post for any locals that want beta.  (There are topos posted at cliff base kiosks for the ones on the left side.)  Apparently there are also more routes in the 5.11/5.12 range that are in the process of being cleaned off and equipped with bolts. 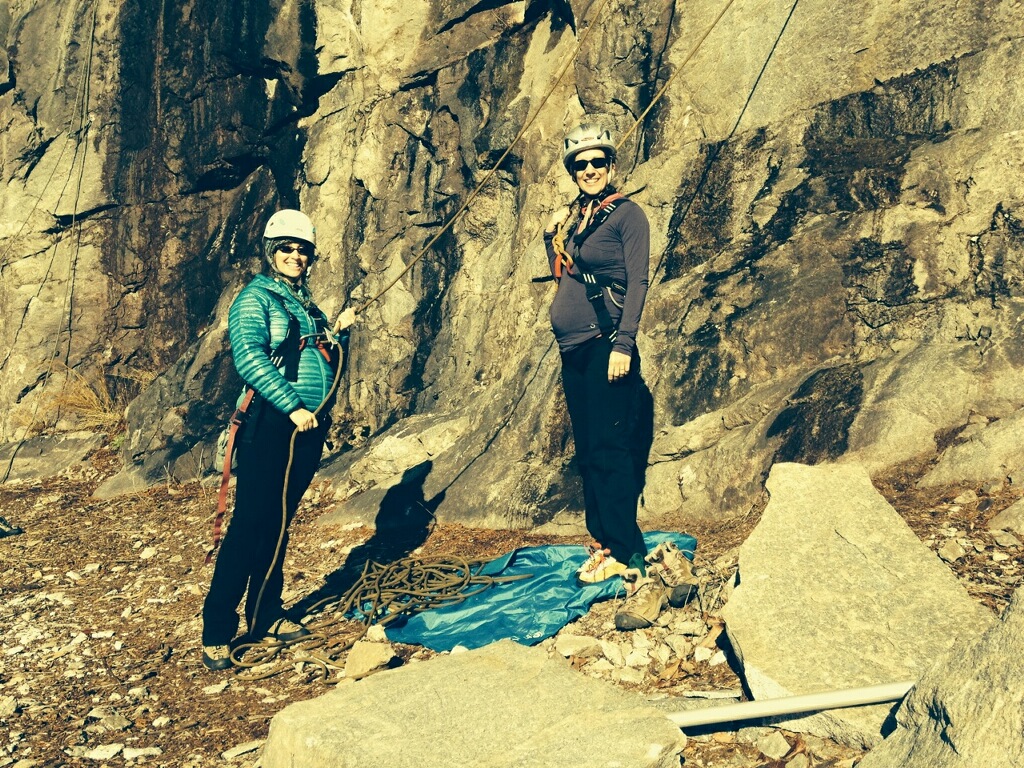 Pregnancy-wise, it was a great day – I got to focus all of my energy on climbing, and didn’t have to worry about keeping enough fuel in the tank to hike out at the end of the day.  I felt reasonably strong, preggo-flashing every route but one.  It was really fun to have another preggo friend to make jokes with about not being able to see our feet while climbing.  Considering it had been a little over a month since I’d been able to climb outside, it felt fantastic to just be out at the crag again.  Good times were definitely had by all – and even the crag-kiddo got some climb time in!

All in all, Rocky Face may not be a destination crag, but it’s well worth a visit if you are in day trip range or just passing through the area…IF you come with the right expectations.  It is perfect for families with babies/small children (which means we’ll probably be hitting it up again this spring with cragbaby #2!).  It’s also awesome for large groups of beginners (boy scout troops, meetup groups, etc.), and folks of all abilities looking to knock out a whole lot of pitches in one day (think: outdoor gym.)  Conditions are stellar in the winter, but would be broiling hot in late spring/summer. 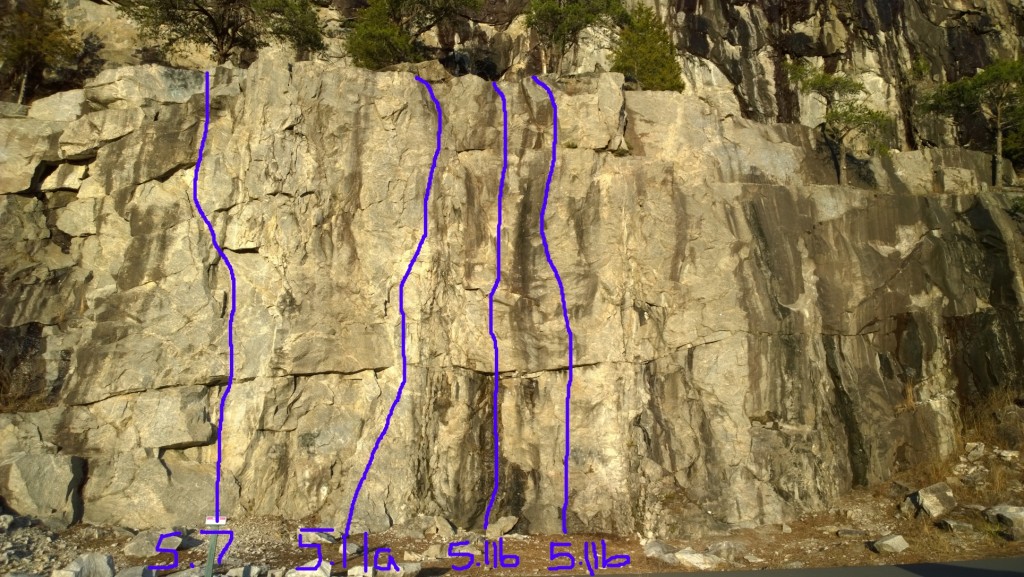