Today marks 27 weeks of pregnancy, aka the 3rd (and final!) trimester.  Although I certainly hope she stays cooking in there for at least another 2 months or so, if my little girl were to be born now, she’d have a 90%  chance of survival – wild, huh?!?  Anyway, here’s a look back at the last 8 weeks of my 2nd trimester, from an activity/training perspective… 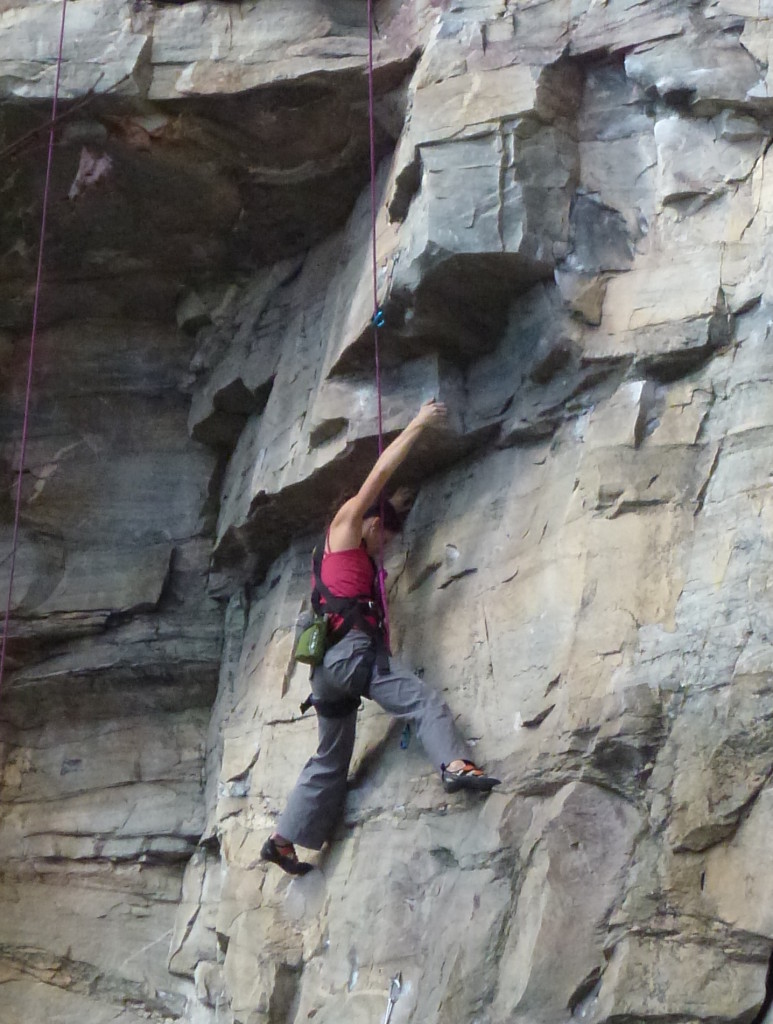 Peering over the bump to see my feet at 22 weeks.

Week 19 – I found myself partner-less at the gym this week, and since I’m past the stage where I feel comfortable bouldering, I had to get creative on the auto-belays in order to get a good workout in.  I did 3 sets of 11 minutes of non-stop climbing (up and down) on a variety of routes ranging in grade from 5.6 – 5.11a.  I also gave myself the added challenge of skipping as many holds as I could on the easier routes, and was psyched to come up with several really fun sequences in the 5.10-ish range.  After 3 sets I’d climbed continuously for 33 minutes, gone up and down 12 routes, and accumulated a nice low-level pump.  I rounded out the night with a few upper body exercises in the weight room (inclined chest press, shoulder press, raises, and some rotator cuff exercises.)  Run/bike/elliptical routines still going strong.

Week 20 – Making it to the halfway point still able to run 4 miles at a time feels really good, as last time around I never did more than 3 miles at a time and was started to sprinkle in walking breaks by this point.  It may be worth noting, however, that last time around I was running 4-5 days per week, whereas this time I’m doing no more than twice per week (and either biking or ellipitcal-ing the other days.)  Perhaps the extra recovery time in between is helping to keep me running?  My times are continuing to drop off, as I’m now taking 7-8 minutes longer to cover the same distance than my average pre-preggo times.  We also took a day trip to climb at Pilot Mountain, which you can read about here. 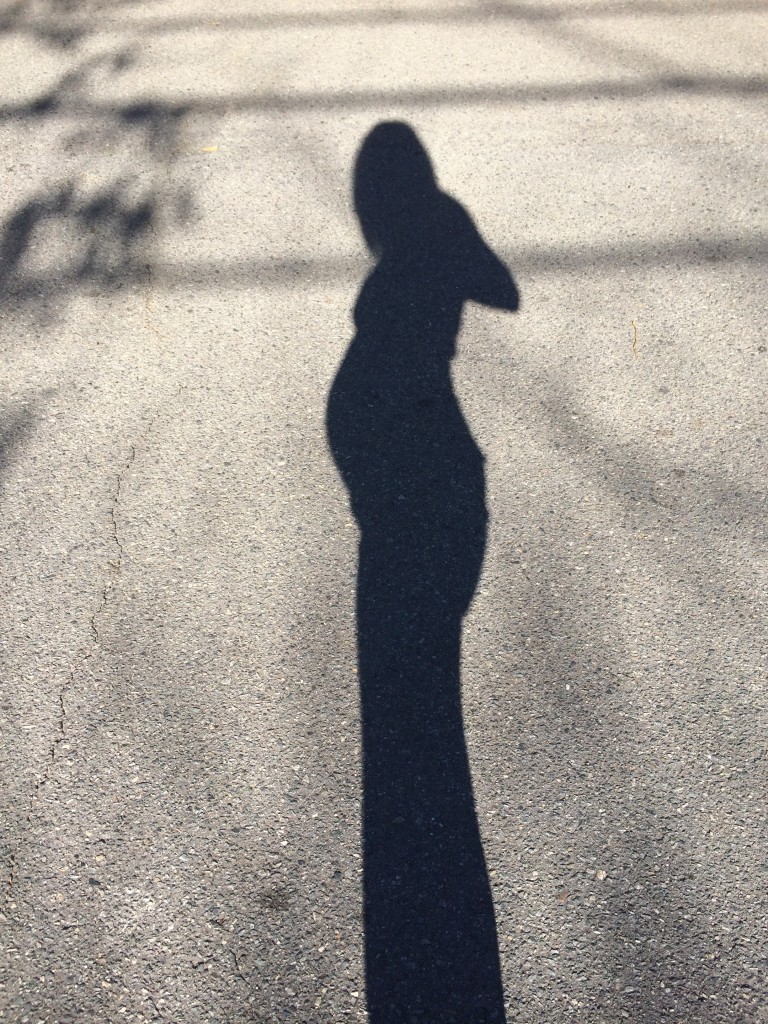 Shadow selfie on a 23 week run/walk

Week 21 – A random cold snap kept me and C from our preschool bike commute for the first time yet this year.  Call me lazy but bundling a toddler up enough to handle sub-freezing temps (not to mention the added wind chill from the bike) for the 15 minutes it takes us to get to school is not worth it.  Despite the cold though I was able to get in several really good runs.  I was also really excited to FINALLY preggo-point the project I’d been working on in the gym – a bouldery and sustained 5.11d that kept spitting me off at the same spot towards the top.  I’d figured out the moves fairly quickly, but my endurance is obviously lacking (and getting worse, not better!)  My strategy was to get the moves dialed in efficiently enough that I could get through it fast enough that I didn’t have a chance to get pumped.  And it’s a good thing that I sent it when I did, as the past few times I’d gotten on it I’d noticed that a hand/foot match down low was getting harder and harder with a growing belly in the way!

Week 22 – Check-up this week revealed that I’d gained exactly 10 pounds thus far, which seems reasonable.  I also managed a “preggo-PR” on one of my runs this week.  I’m finding that I miss bouldering a lot more than I miss lead climbing this pregnancy.  With C, hubby and I could rope up whenever we wanted to, but now that a toddler is in the mix, we have to rely on other folks for climbing partners, and several times recently I’ve found myself stuck without a belay buddy.  The non-pregnant me would simply enjoy a bouldering session…but the pregnant me is relegated to auto-belays and low traversing.  For example this past week one of my climbing sessions consisted of a 15 minute continuous auto-belay warm-up on increasingly harder terrain.  After resting a bit, I methodically traversed my way around the bottom of the walls for 30 minutes.  While this type of ARC (Aerobic Restoration and Capillary) Training offers plenty of training benefits in it’s own right, it gets pretty darn boring after a while.  Climbed outside at Pilot Mountain again over the weekend, where I donned my pregnancy harness from Mountain Mama for the first time (trip report  found here.) 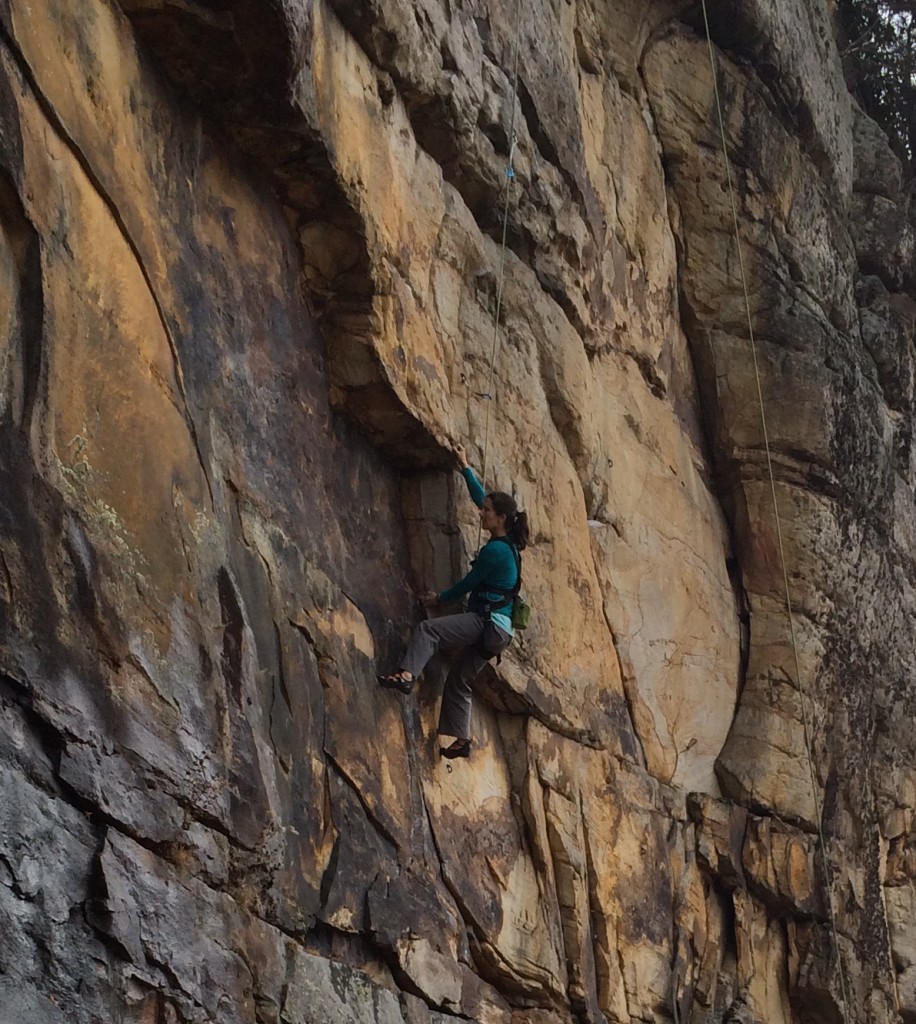 Week 23 – Great climbing session w/the hubby this week.  Except for the giant full body harness, I hardly felt pregnant!  I was able to preggo-point two sloper projects (.11b and .11c) that had me flailing the first time I tried them a couple of weeks ago, and even flashed a steep .11a that I’d shied away from trying because I didn’t think my big belly had a prayer at that angle!  Running, however, has started to turn into a chore (mostly from Round Ligament Pain, which although uncomfortable for mom is harmless to baby – more on that here.)  With that in mind I decided to add in some walk breaks.  It’s amazing what a difference just a tenth of a mile walking here and there can make overall!

Week 24 – With my new walk/running routine in place, I’m back to feeling good during and after my runs.  My usual m.o is to walk a couple of tenths for every mile to mile and a half, which means that 3.7 – 4 miles of running interspersed with about a half mile of walking ends up being the magical feel-good combination.  We took what will probably be our last trip to the New River Gorge as a family of 3 this past weekend (trip report here), where I started to notice my bump pushing me out away from the wall a bit, shortening my reach.  Other than that I felt strong in spurts – I could do a few hard moves in a row, but then either needed moderate terrain or to rest on the rope.  With a couple of rests I was able to do all the moves on one of my favorite 5.12’s pretty quickly (Freaky Stylee at Endless Wall), but the hardest thing I was able to “preggo-point” was 5.11a. 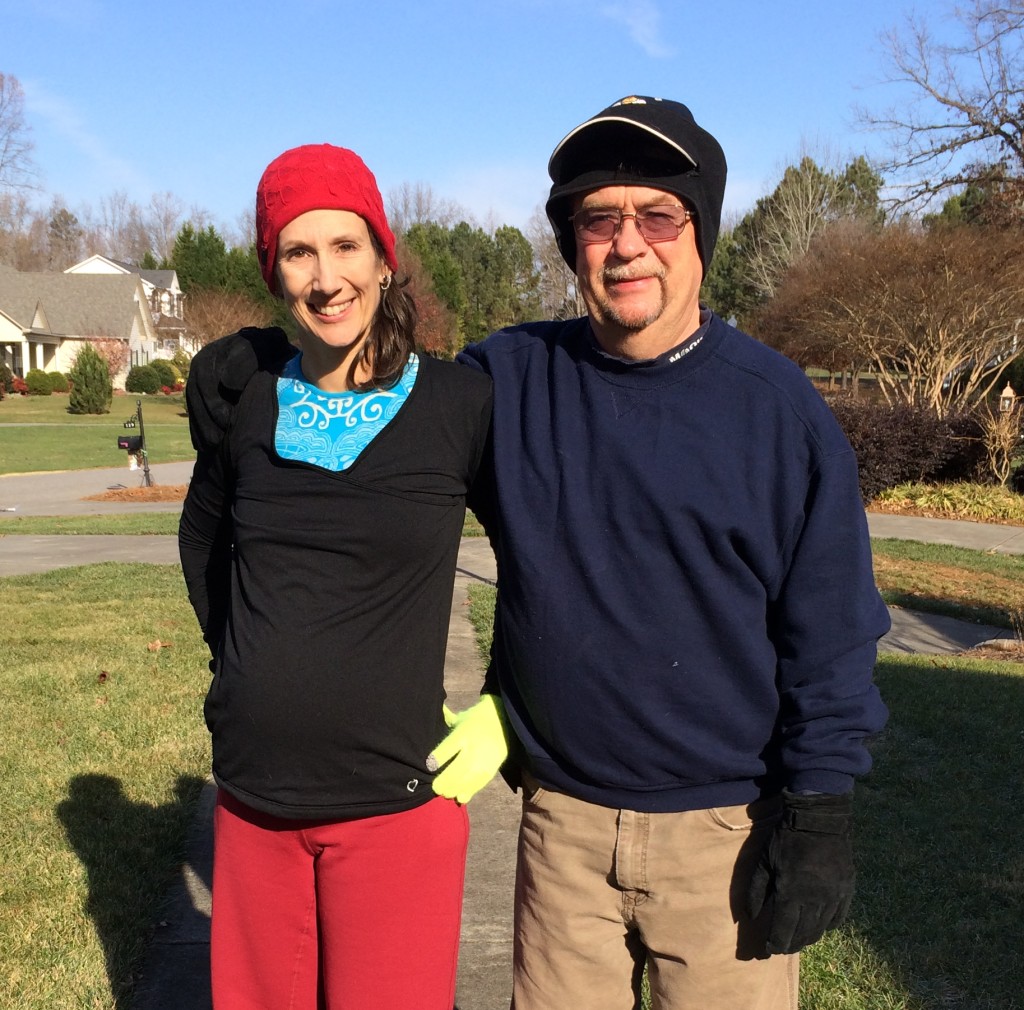 Turkey Day walk with my dad at 26 weeks.

Week 25 – Run/walks still feeling good – knock on wood, no discomfort from Braxton Hicks during workouts, which is a welcome change from last pregnancy.  An extended rainy day session at the climbing gym went well, although I’m not downclimbing routes as much as I had been earlier in the pregnancy (a lot more tiring than it was just a few weeks ago!)  I’ve been able to send several of the newer 5.11’s that were just put up, but my successes are becoming more and more style dependent, and avoiding steep terrain pretty much altogether.  Haven’t been biking in a couple of weeks, but that’s due mostly to the weather rather than the pregnancy.  A recent doctor’s appointment showed that my iron is low, so I switched over to a pre-natal with higher iron content, and am making a point to chow down on iron-rich foods.

Week 26 – Biggest surprise of the week for me was knocking out not one but TWO 4 mile runs with no walk breaks…and each time feeling like I could have kept going (I didn’t.)  Maybe the recent increases in iron intake are increasing my energy levels?  (Or maybe it’s just placebo effect…)  Regardless of the reason, it was encouraging.  Biggest disappointment this week was the climbing gym – I showed up psyched, but ended up partnerless so I filled my time with some aimless wanderings on the auto-belay and a bit of upper body weight lifting.

Week 27 – Starts today!  I’m celebrating with a morning climbing date with the hubs while C is in preschool! 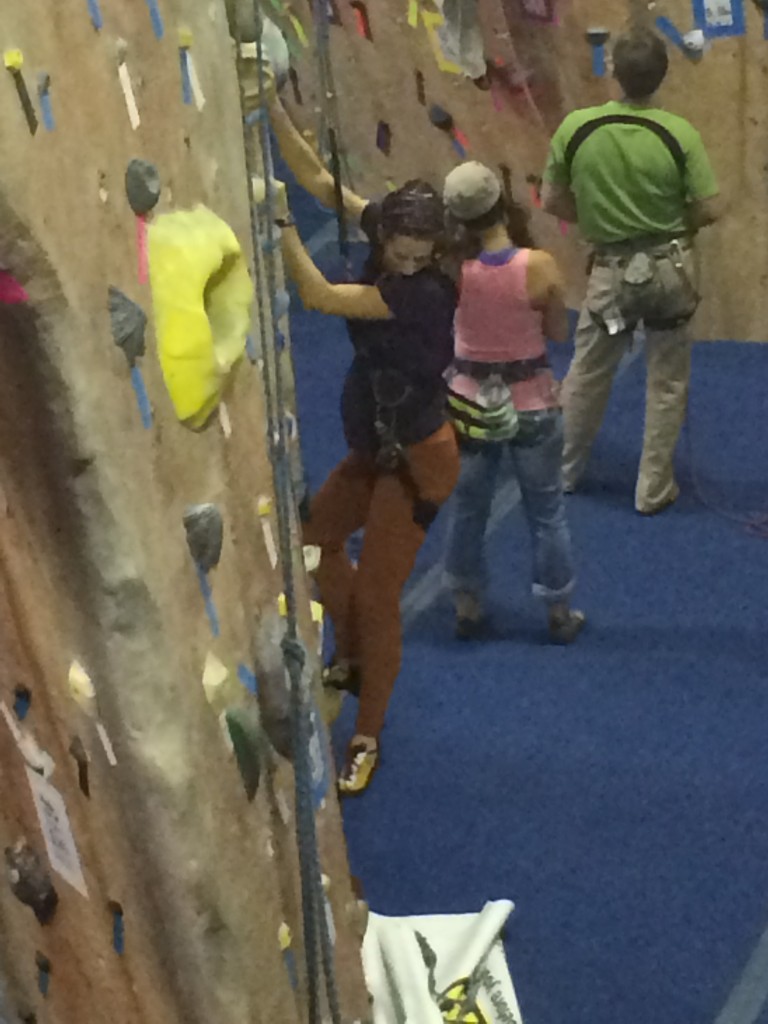 Slave to the auto-belay at 26 weeks.

And just like that, I’m 2/3 of the way done!  While the first half of this pregnancy seemed to drag on and on, the past several weeks have flown by, and with the holidays upon us, my guess is that time will only speed up from here!  I’ll post another update in a few weeks, but in the mean time, I’ve got a discussion starter for all you veteran moms out there – what was the biggest difference between your activity level during the 2nd trimester and the 3rd?  For my pregnancy I remember it being the lack of running, and an inability to walk more than 20 minutes at a time without having a pee break!