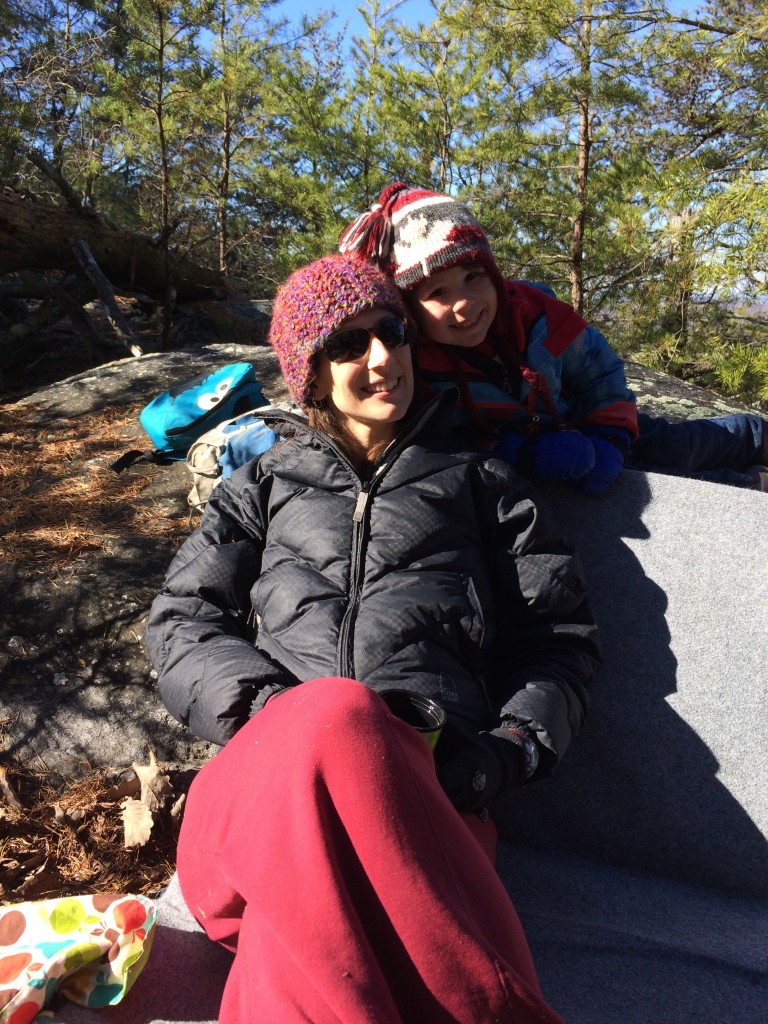 We found a sunny spot to watch everyone throw themselves at the Egg Boulder.

Tradition states that every year we MUST go climbing on the Crag-Daddy’s birthday with as many people as we can round up, followed by a big party at our house afterwards.  Usually the wide range of abilities represented and the sheer amount of people means we wind up at the Dixon School Rd boulderfield.  It offers decent winter conditions, and is just down the road for all the local folk.  We usually also end up with a few out-of-towners that crash at our house for the night.  Steve’s birthday is not actually until the 23rd, but the past couple of years our schedules have dictated that we celebrate over MLK Jr weekend, affording us an extra day to climb.  Last year we squeezed in 3 destinations in 3 days, snagging memorable sends left and right.  This year was a little more low-key…

With only a few more weeks to go in this pregnancy, I was obviously well past the bouldering stage, but that didn’t stop me and the crag-kiddo from heading out there to socialize and hang out with friends.  The crowd was a tad smaller than previous years – temps in the low-40’s scared a few away, and several stayed home stricken with whatever that flu-ish/fevery thing is that’s been making the rounds lately.  But with just over a dozen folks there, we definitely still had plenty of pads and plenty of spotters.  Playing the role of spectator wasn’t as hard as I thought it was going to be, but there were definitely a few times where I wished I could jump in there with everyone else.  I’m in the home stretch though…soon enough I’ll be cleared to land on a crash pad once more! 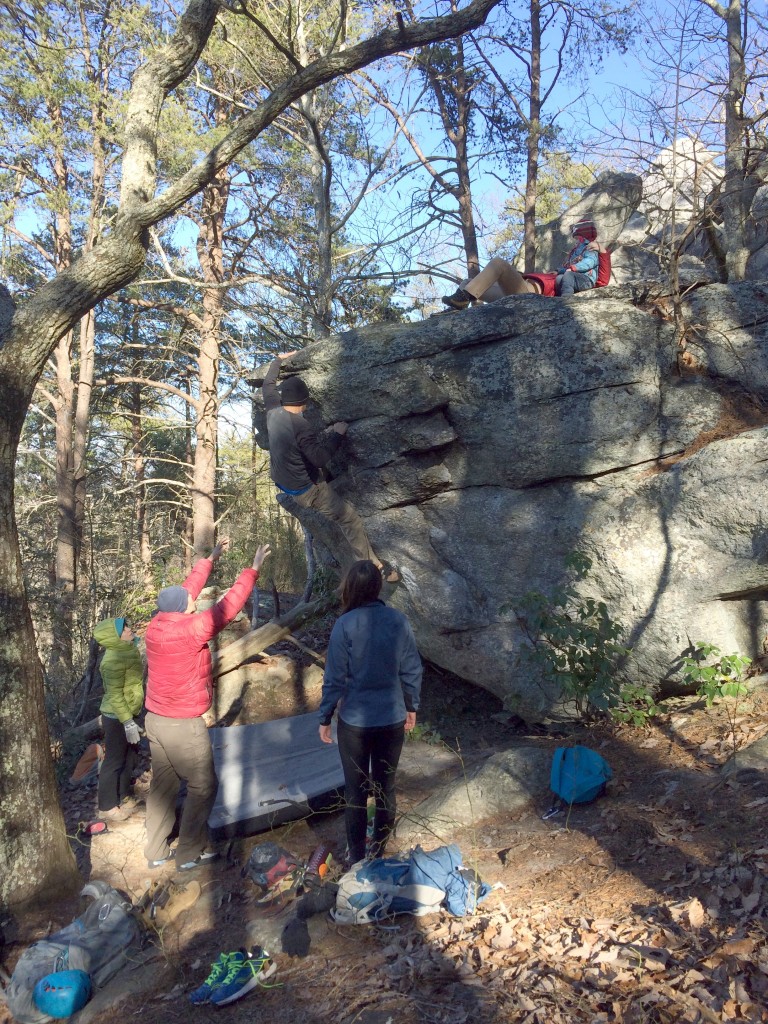 Emil on the Jerry Springer Boulder

We didn’t climb on Sunday, but Monday we met a bunch of friends out at Rocky Face, which has been our go-to winter crag of late.  With blazing sun and temps in the upper 50’s it was ALMOST too hot – quite the change from Saturday, but that’s how we roll in the Southeast this time of year.  Crazy as it may sound, this day of craggin’ was probably the favorite of my entire pregnancy (so far…) 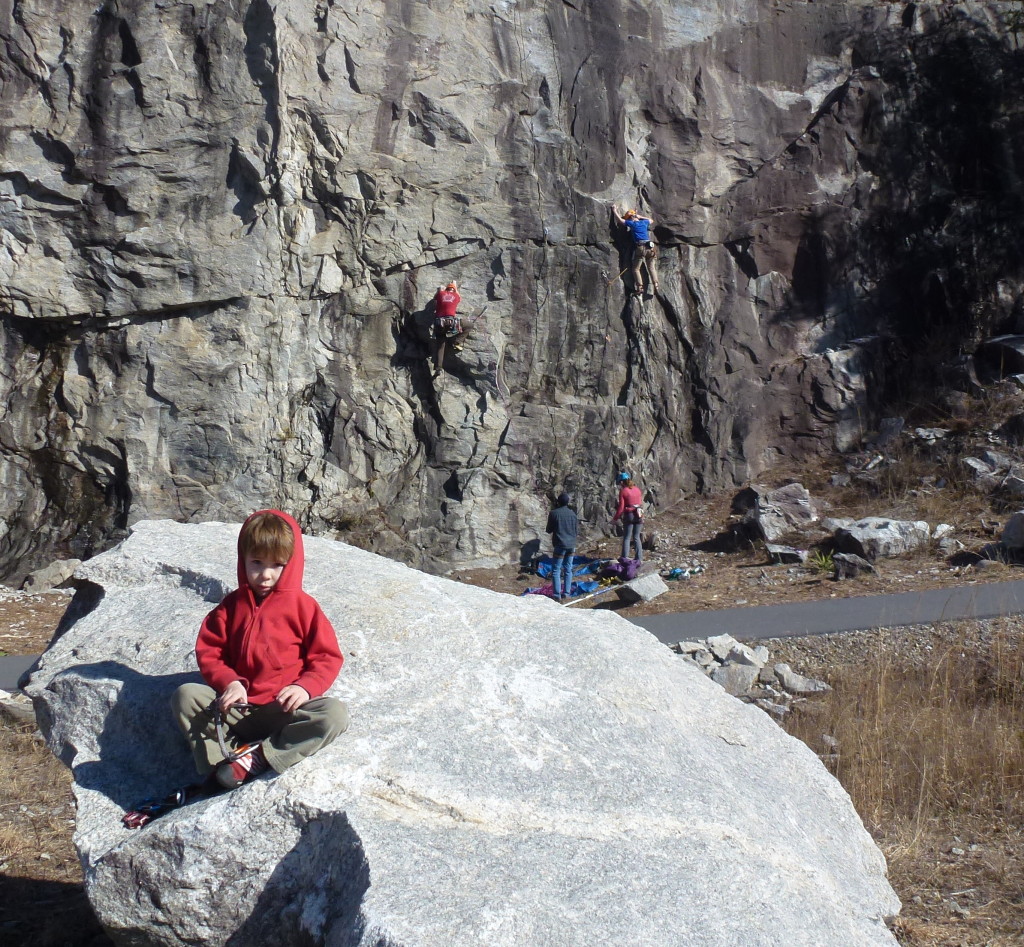 After warming up on a new bolted line that was less than 24 hours old (Crimps and Slopers , 5.10b/c), we got down to our goals for the day.  I had hoped to refine my beta well enough on Quickdraw (5.11c) to toprope it clean, which would make it by far my hardest 3rd trimester preggo-point to date.  I’d tried it once before, but figured it would take me at least a couple of attempts to remember the moves, but I was delighted to climb it clean on my first try!  Steve scored a legit 2nd go send, and then we both turned our sights to Mr. Aidman’s Free (5.11a), which is technically very straightforward, but a lot more powerful (ie not my strong suit when it comes to pregnancy!)  After botching the beta hanging the draws, Steve once again scored a 2nd go send.  I’d also been on this one once before, and it had packed quite a punch, so I wasn’t too optimistic about the preggo-point…but it felt a lot easier than I’d remembered and once again I found myself at the anchors with no falls or hangs!  I rounded out the day by taking a clean lap up one of my favorites, Hardman (5.11b). 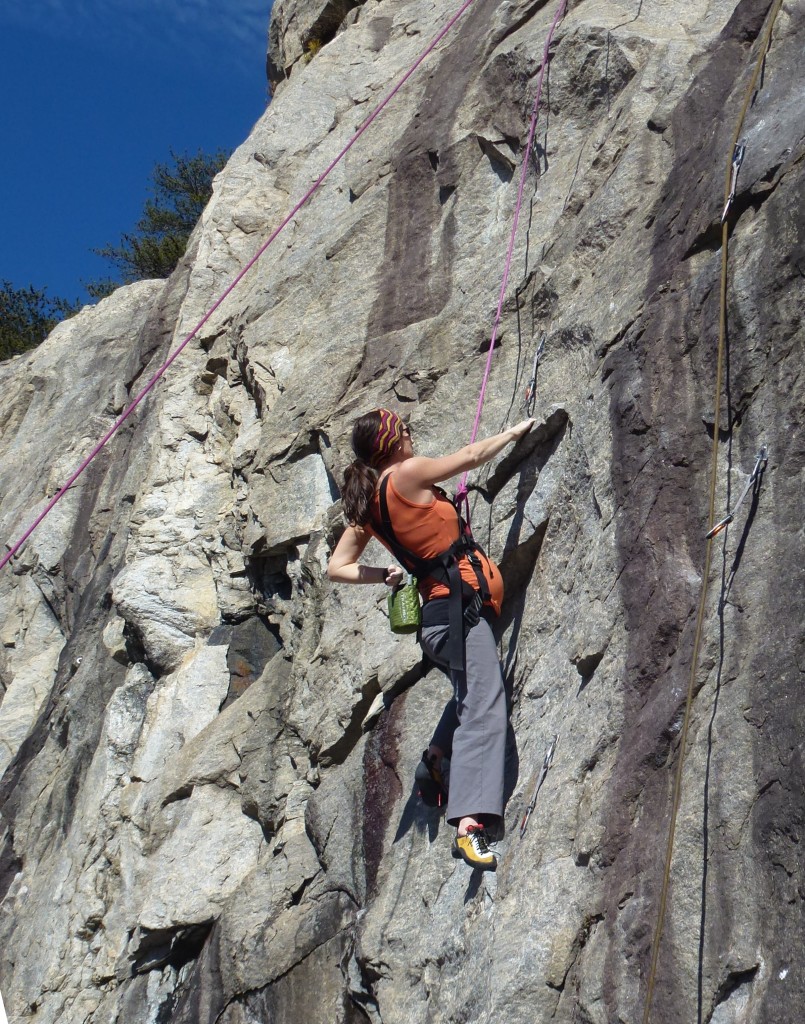 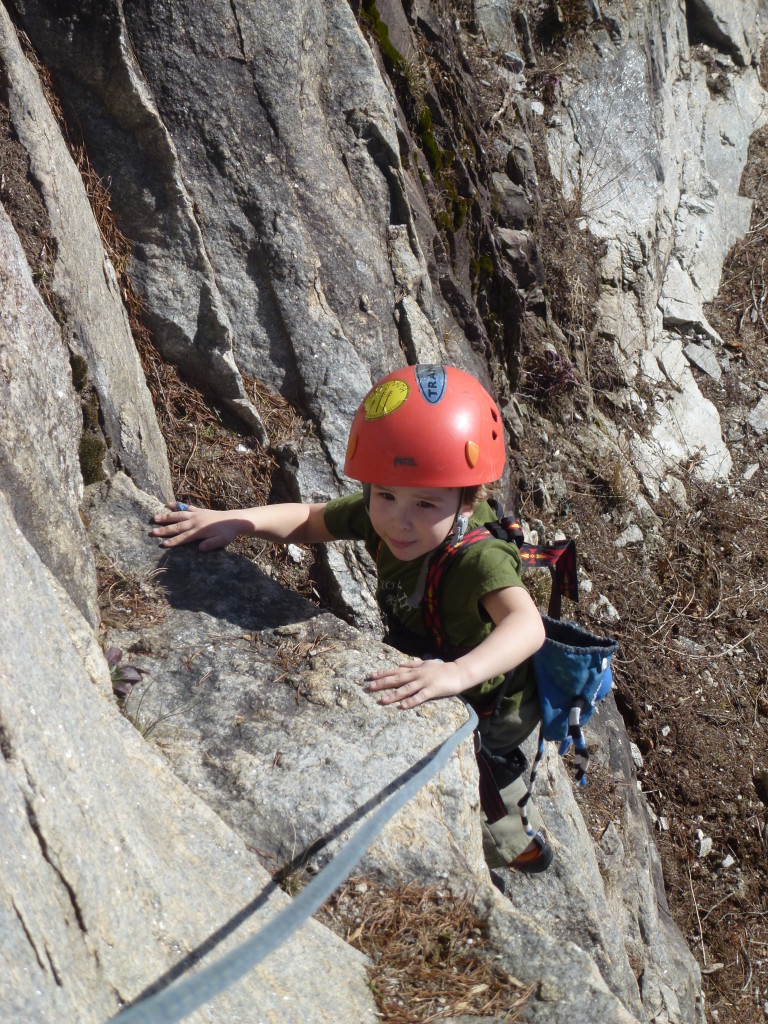 It was very encouraging to me to feel as strong as I did – I figure if I can still crank out three 5.11’s in a day this late in the game, I have a pretty good chance of getting back in climbing shape by the end of the summer.  It’s interesting that I all of a sudden feel a lot stronger.  Maybe it’s because baby’s dropped a little bit, which has afforded me a lot more breathing room?  Breathing easier = less pumped = less rushed = smarter climbing?

In other news, the grown-ups weren’t the only ones having fun on the rocks…C ticked off a very important milestone for himself as well.  He made it to the top of not one, but TWO routes!  Both clocking in at a grade of 5.2 – Left at the Y, and Right at the Y are officially the first two climbs C’s ever completed on toprope.  While he can regularly crush walls at the climbing gym, he’d yet to finish anything outdoors on a rope.  To be honest, this is probably mostly our fault…We rarely find ourselves at crags with routes easy enough for him to finish, so he usually just hops on the first part of whatever he’s interested in doing that already has a rope on it (which translates to a lot of “boosting” through moves too hard for him to do with sections where he can’t reach the holds.)  But Rocky Face has a wide variety of options for beginners of all ages.  Throw in a little extrinsic motivation via some cupcakes leftover from the birthday party and an encouraging Daddy waiting for him on top, and C was crankin’ his little heart out!  For both climbs he rested on the rope a bit in the beginning, but he did do all the moves without any belayer assistance, and the result was a gigantic beaming smile that made my heart happy for the rest of the day.  As he was lowered he processed his feat out loud – “The first time I tried it I couldn’t do it, but then I tried again and I COULD do it!”  YES.  Life lesson learned. 🙂 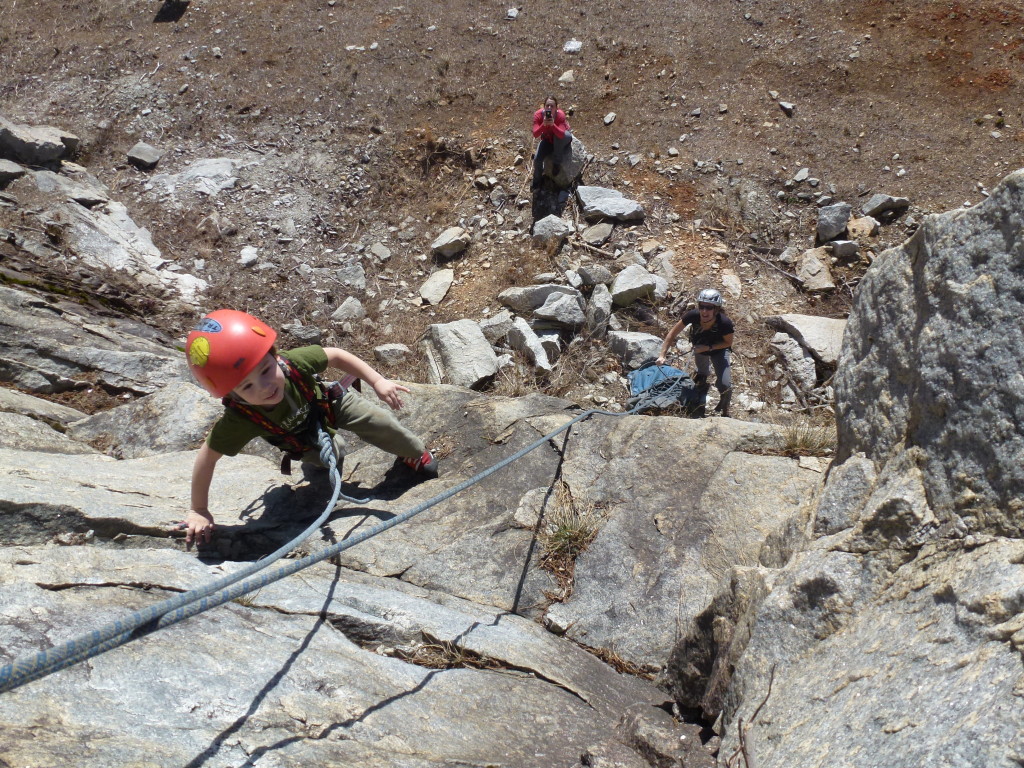 With just 6 weeks left til the due date, our climbing weekends as a family of three will soon be no more, so it was awesome that this particular one was so much fun!  Next year’s MLK weekend will probably look a lot different than this one, and I’m thankful for all of our friends and climbing partners who helped make my hubby’s birthday celebration special!