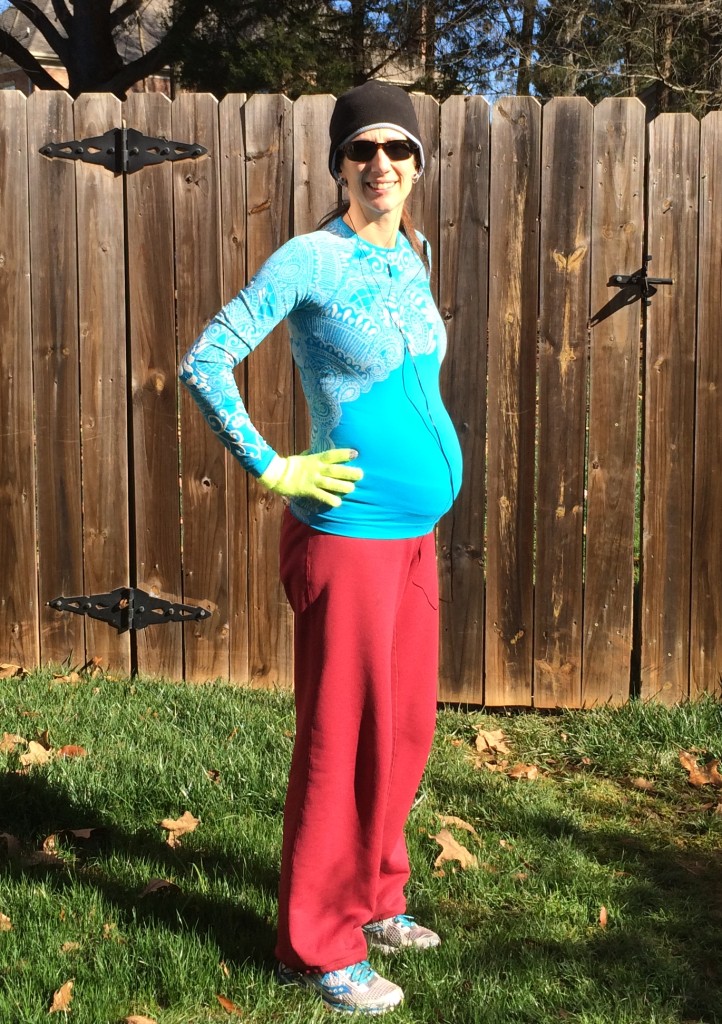 Layered up for a 28 week run

If you’ve been following this blog for the past few months. you’ve probably read my exercising and pregnancy updates every 6-8 weeks or so.  (Past updates can be found here, here, and here.)  The purpose of these updates is not to brag about what I CAN do or complain about what I CAN’T do, but rather share my experiences, in the hopes that another mama-to-be out there might find them useful, helpful, or inspiring.  That being said, here’s how things have been going in the third trimester so far…

Week 27:  Weather has been cold and rainy, so it’s been a couple of weeks since I’ve been able to climb outdoors.  However in the gym I’m noticing that my abilities are becoming more and more inconsistent.  I can onsight .11b one minute, only to not be able to get off the ground on the .10d right beside it.  If I have my beta dialed to move efficiently, I can still redpoint within 2-3 letter grades of my pre-pregnancy abilities on vertical terrain.  But I’m also finding that certain easier moves are becoming increasingly difficult as my ever-expanding belly forces my center of gravity away from the wall, limiting my reach and affecting my balance.

Week 28: Running is surprisingly still going strong – I’ve even felt so good that the past several workouts I’ve been able to get in all 4 miles without having to walk at all (if you can call an 11:45 mile pace running 😉 )  On the days I don’t run I get in some time on the elliptical – I can still get in the full 40 minutes I would do pre-pregnancy, but just like with everything else, the intensity and speed have dramatically decreased. 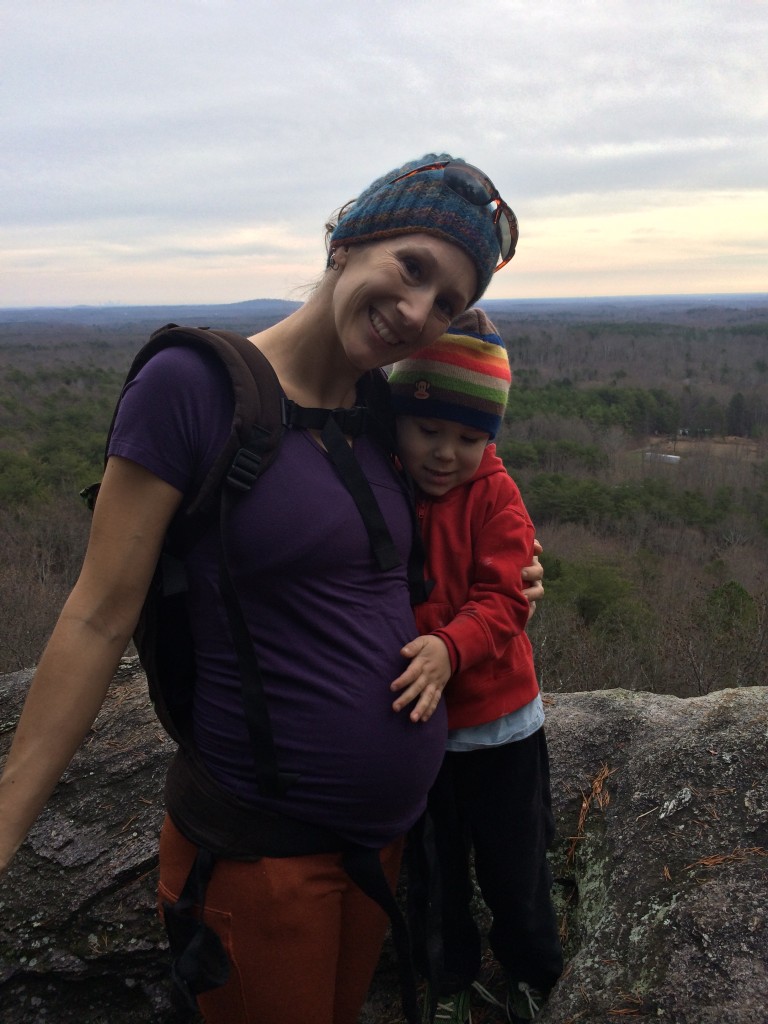 Week 29:  More and more I’m starting to notice that 5.11b/c is starting to feel “hard in a not fun way,” so I’ve backed the difficulty down a notch, especially in the gym, where routes are more sustained.  Also, lowering in a full-body harness is becoming more and more awkward, so at the gym I’m trying to steer towards routes that have a neighboring route I can downclimb rather than lowering off.   Running and elliptical?  Still in the activity repertoire.

Week 30:  I’m 3/4 of the way through this pregnancy (or more if baby #2 is early like C!)  I celebrated by climbing outdoors again (finally our schedules aligned with sunny, dry weather!)  That went well, and the trip report can be found here. I also got in a couple of hiking days, as well as a gym climbing session.  I ran twice this week, distance still the same, pace continues to slow.

Week 31:  My power endurance is at approximately zero when it comes to climbing, and the belly continues to get in the way.  But I’m still feeling great and having fun on most 5.10’s and vertical 5.11 terrain.  Weather conditions were excellent over the weekend, and I got in 6 outdoor pitches in addition to my normal days at the gym, including a couple of nice preggo-points.  My only running session of the week, however, went TERRIBLE.  Not sure what happened in just a matter of days, but I struggled and had to cut my workout short.  My hips hurt, my back hurt, and the round ligament pain simply wouldn’t let up.  Perhaps it’s time to shift mindsets from “running with walking breaks” to “walking with running breaks.”  I’m thankful to have made it to the 3rd trimester still running, so the past few weeks have felt sort of like a “bonus” anyway. 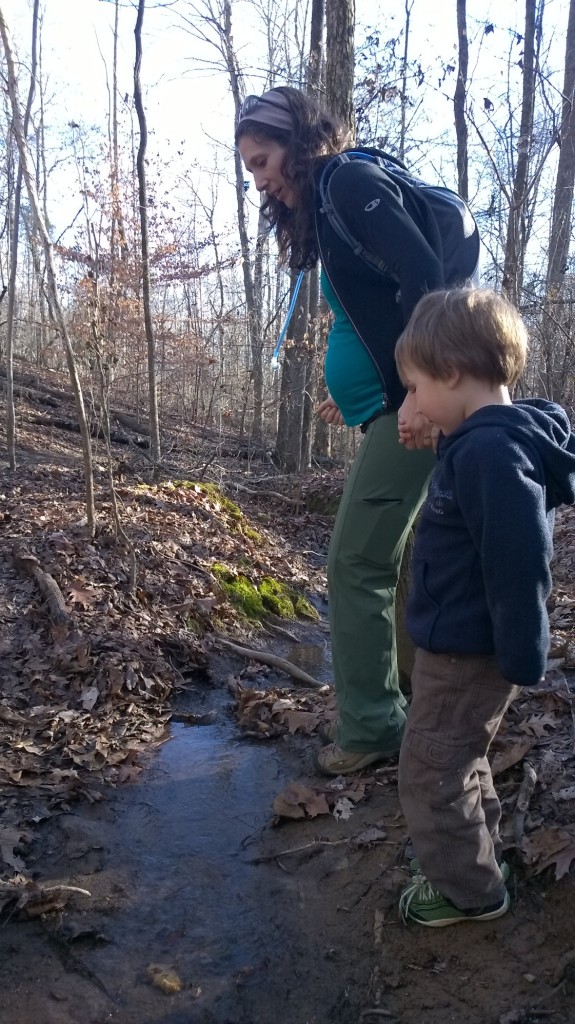 A little impromptu creek-jumping on a muddy hike at 32 weeks. (Still rockin’ my Stonewear pants!)

Week 32:  While I’ve always been one of those people who climb better outdoors than in the gym, it’s becoming more and more pronounced the later I get in my pregnancy.  I think it boils down to the fact that when I climb on real rock we’re there all day, so I can take as long as I want to rest in between climbs.  But at the gym I’ve only got an hour to pack in a workout, and belaying my partner doesn’t always give me enough time to fully recover in between routes, especially after harder ones.  But even if I only get a few pitches in before calling it a night, it’s still fun, which is the important thing, and I’m thankful that I’m still climbing.  Just a couple of gym sessions for me this week due to rain, but they went well – I’ve got several old stand-by’s that I’ve got so dialed I can do in my sleep – most of my harder climbing is now done on familiar terrain as opposed to “projecting” something.  Running was MUCH more encouraging (and pleasant!) this week than last.  I was extra vigilant about walking at the least little sign of discomfort, as well as shortened my route by almost half a mile.  By the end of the workout, I’d run for 3 miles out of 3.6, and felt good enough that I was tempted to keep going, but decided to play it safe.  Maybe the week before was just an off day?

My next (and probably last update until postpartum) will be in just over a month at 37 weeks, when I’m officially “full-term.”  Woo-hoo!  Fingers crossed that the home stretch goes smoothly!