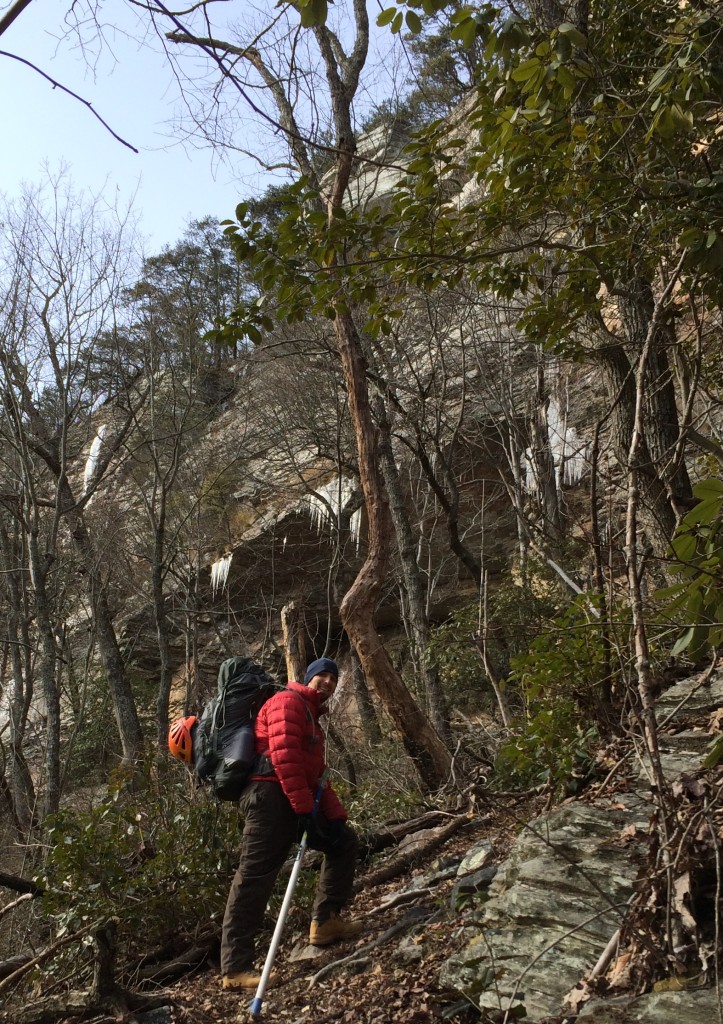 My favorite sherpa on the approach

Anyone who’s climbing journey has survived multiple life phases (career changes, marriage, kids, etc.) probably has fond recollections of their first “home crag.”  Each visit was filled with onsight potential, and you actually NEEDED the newest edition guidebook, rather than just buying it because it’s good bathroom reading.  Some of us still climb at our first local crag, with a familiarity and sense of hometown pride that is obvious to everyone – even if you can’t climb “the testpiece,” you know just about everyone who has and exactly how each one’s beta differs from the next.  Others have moved on to bigger and better, either geographically or metaphorically speaking.  But regardless of your current relationship with that first hunk of rock you cut your teeth on, it’s not unlike relationship milestones with people – you never forget your first!

For hubby and I, one of our first “home crags” was Sauratown Mountain.  It was 2 hours from our house in Raleigh, and offered some of the best winter climbing conditions in the state…so long as the sun was out.  I can think of numerous instances where we all climbed in tank tops on sunny, clear days in the 30’s, and just as many days spent shivering with numb hands and fingers on a cloudy, windy day in the low 50’s.  It was the one place where you for sure didn’t want to forget your headlamp – the short, winter days coupled with a long hike out across large rocks buried in 3 feet of fallen leaves meant that I could count on one hand the number of times we made it back to the car before dark (or without some sort of spastic, slow motion trail slide on my part…) 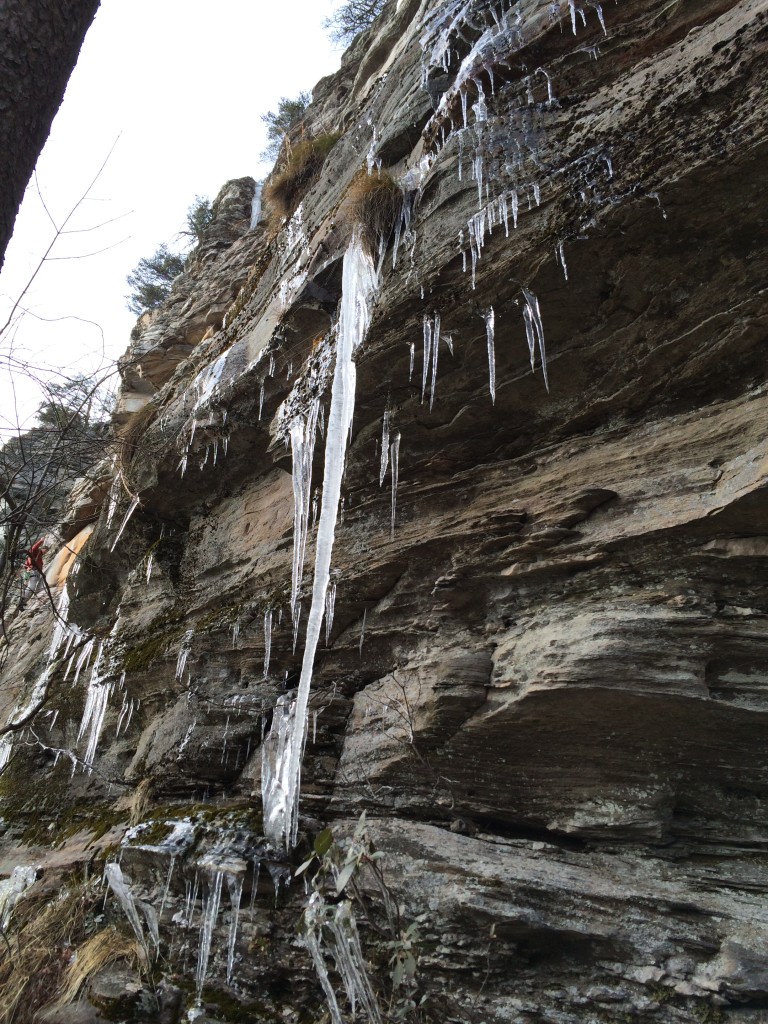 Cold and gray was the theme of the day…

But my favorite part about Sauratown was the people that climbed there.  While most NC climbers either took the winter off or turned to pebble-wrestling, there were always a handful of folks that were willing to endure the uphill slog every weekend to bake in the sun high above the rural farmlands.  Even on “crowded” days, it was a safe bet that you’d already know anyone you ran into, and that the only time you might have to wait in line for a route was if you got there late and the 2 token warm-ups were already taken.

Access was always a little sketchy in a don’t-ask-don’t-tell sort of way.  The land was (and is) owned by a kid’s camp/retreat, and while the camp staff looked the other way during the slow winter months when there were rarely any groups there, everyone knew we were treading on thin ice.  There were no guidebooks, and route beta was passed around by word of mouth and hand-drawn topos.  I remember the sense of pride I felt when someone finally emailed us a scanned copy of “the topo,” along with strict instructions to never give it to anyone else under penalty of death.  (That might be a slight exaggeration but you get the gist…)  But anyway after a few seasons of climbing there, there was a horrible fire (2008.)  Although the trail damage was temporary, the damage to climbing access seemed permanent.  Due to safety and liability concerns, the landownders decided to close down climbing access.

But thankfully, the Carolina Climbers Coalition didn’t give up – for the past several years, they’ve been working hard behind the scenes.  Every winter NC climbers would hear rumblings of “did you hear their gonna open up Sauratown again?!?”, but each season would pass  by uneventfully, and everyone would look longingly at the radio antenna littered summit as we drove to other crags.  But this year was different!  Through a sizable donation from the CCC, (click here to contribute), an agreement has been reached between climbers and camp staff.  This year we have been given the opportunity to climb at Sauratown on 9 specific days (over the course of 3 weekends.)  The first one was back in December, and we had family holiday obligations to attend to.  The January date was originally set for earlier in the month, but rescheduled to this past weekend due to crappy weather.  (The upcoming February date is far too close for comfort to baby #2’s arrival, so we moved heaven and earth to make sure we were free this past weekend!)

Heading into this weekend we knew the weather was less than ideal – a high of 42 with 80% cloud cover and 15-25mph winds.  Yuck.  Clearly the weatherman didn’t understand that this was our ONLY chance to get up there again until….maybe ever, since we of course are not guaranteed the same arrangement next year.  But we’d already made arrangements for C to spend all day with his grandparents, and we knew that this would probably be our last chance to climb just the two of us for a REALLY LONG TIME.  So we went for it, ready for a Type 2 fun, gluttons for punishment sort of day.

Unfortunately the weather held true to the forecast – cold, windy, and pretty much miserable conditions for rock climbing.  The hike was about as hard as we’d remembered, and leaving C was a smart choice (even though I know he would have LOVED all the icicles and fallen ice shards that were littering the cliff base!)  It would have taken him half a day to get up there with his little legs, and at this point in my pregnancy I don’t think I could have made it up there with him on my back.  Thankfully hubby’s old down jacket and a thermos full of hot tea kept my belly covered and warm…but without the sun the rock was far colder than the air temperature.  The climbing itself just wasn’t fun.  Even when the sun peeked out for about 30 minutes in the afternoon, it was too little too late. 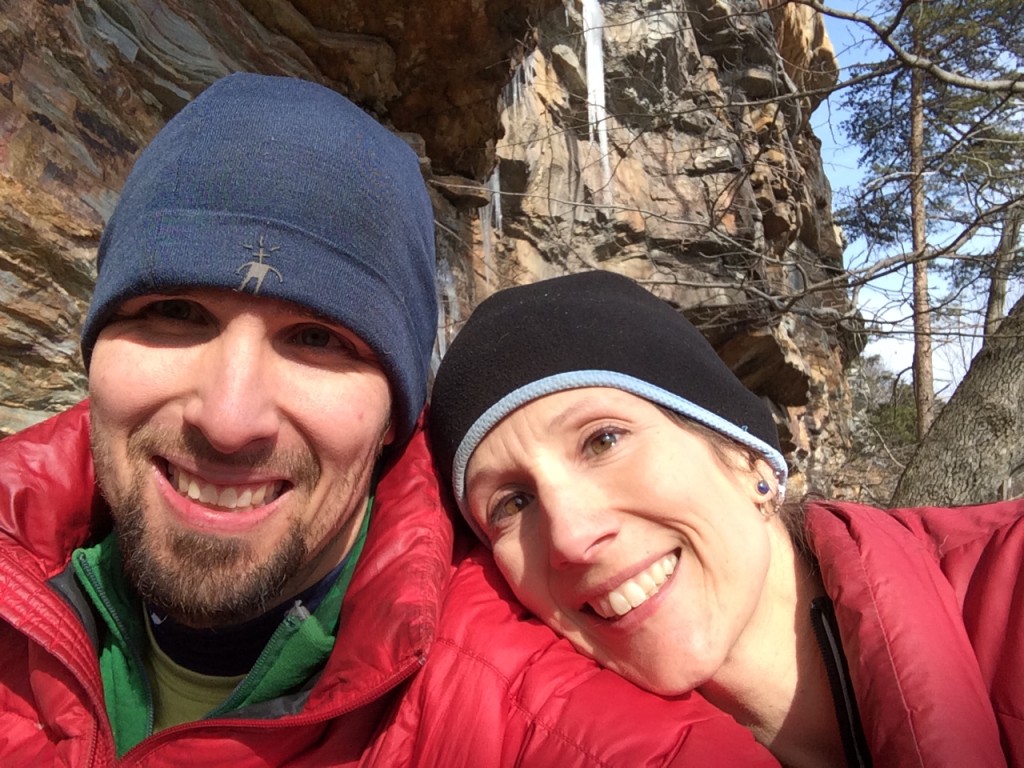 Selfie photo opp during the brief interval of sunshine.

So after punishing ourselves on the warm-up, we decided we’d have more fun just “sight-seeing.”  You know, wandering around the cliff being social with the other fellow masochists, and reminiscing to each other about our favorite memories from the area.  And of course, playing with giant icicles in honor of C!  Certainly not a typical crag day for us, but nevertheless, a fun one.  I wish we would have been able to actually climb more, but it just wasn’t in the cards on this particular day – we’ll just keep our fingers crossed that next year works out better for us!